Our world is full of natural wonders. There are lofty mountains, unbelievable rock formations, colorful lakes and hot springs, gigantic waterfalls, just to name a few. These creations of nature can easily leave you speechless, by virtue of their sheer scale or by their surrealness (or sometimes both).

You may already be aware of many such natural wonders – maybe you've visited one of those places, read about it somewhere, or seen a photograph of it online. But every once in a while, you may come across a place that you never knew about before. And when you do, your travel bucket list grows longer.

This post will test if you can identify these natural wonders from their photos. Some may be fairly easy to guess, but some may be totally new to you. Whatever it is, we do hope that you'll enjoy the beautiful landscape photographs we've put together.

1. Famed (and named) for its striking coloration

The Grand Prismatic Spring in Yellowstone National Park is the largest hot spring in the United States, and the third largest in the world. Named for its striking coloration, its colors match the rainbow dispersion of white light by an optical prism: red, orange, yellow, green, and blue. The hot spring owes its coloration to the different heat-loving bacteria living in it.

Salar de Uyuni, located in Bolivia, is the world's largest salt flat at 10,582 square kilometers (4,086 sq mi). It's covered by a few meters of salt crust, which has an extraordinary flatness with the average elevation variations within one meter over the entire area of the Salar. The large area, clear skies, and exceptional flatness of the surface make the Salar an ideal object for calibrating the altimeters of Earth observation satellites.

3. Waves on the rocks

The Wave is a sandstone rock formation located in Arizona, United States. It's well known among hikers and photographers for its colorful, undulating forms caused due to erosion by wind and rain. A permit is required to make the unmarked hike to the Wave.

4. The lights that dance

Auroras are easily among the most fascinating sights you'd ever witness in nature. Also known as northern lights, they are predominantly seen in the Arctic and Antarctic regions. Auroras are produced when charged particles from sun interact with Earth's atmosphere, sometimes appearing as waves across the sky; almost as if the lights are dancing.

Mount Everest is the highest mountain in the world, with its peak 8,848 metres (29,029 ft) above sea level. First summited in 1953, it has been climbed by more than 4000 people so far. George Mallory, an English mountaineer who died in an attempt to make the first ascent of Everest in 1924, remarked that reaching the highest point on Earth once served as a symbol of “man’s desire to conquer the Universe”.

6. As high as a waterfall can get

Angel Falls is the world's highest (rather, tallest) waterfall with a height of 979 meters (3,212 ft). Located in Venezuela, the waterfall has been named after Jimmie Angel, a US aviator, who was the first person to fly over the falls, in 1937. Angel Falls inspired the setting of the Disney animated film Up (2009) although, in the film, the location was called Paradise Falls instead of Angel Falls.

Among Northern Ireland’s most popular tourist attractions, Giant’s Causeway is an area of about 40,000 interlocking basalt columns, formed 60 million years ago when underground lava flows cooled. The tops of the columns, mostly hexagonal in shape, form stepping stones that lead to and disappear under the sea. According to legend, the columns are the remains of a causeway built by an Irish giant who was challenged to a fight by a Scottish giant, and built the causeway across the North Channel so that the two giants could meet.

8. This coral reef system is so big it can be seen from outer space

The Great Barrier Reef, located off the coast of Queensland, Australia, is the world's largest coral reef system, stretching over an area of approximately 344,400 square kilometres (133,000 sq mi). The Great Barrier Reef can be seen from outer space and is the world's biggest single structure made by living organisms, composed of and built by billions of tiny organisms, known as coral polyps. It supports one of the most diverse ecosystems in the world.

9. Grand is the word

Located in the US state of Arizona, the Grand Canyon is among the deepest gorges in the world. It is known for its visually overwhelming size and its intricate and colorful landscape. The canyon is the result of constant erosion by the Colorado River over millions of years. As a result, nearly two billion years of Earth's geological history has been exposed, making it a location of significant geological interest.

Located on the Argentina-Brazil border, Iguazu Falls are the largest waterfalls system in the world. The falls have often been compared with the other waterfalls in the world, in terms of grandeur. An interesting anecdote associated with Iguazu Falls says that upon seeing the splendor of Iguazu, the United States First Lady Eleanor Roosevelt reportedly exclaimed “Poor Niagara!”.

Pamukkale, located in southwestern Turkey, is famous for its hot springs and enormous white terraces of travertine, a carbonate mineral left by the flowing water from the springs. These white terraces of Pamukkale, which means “cotton castle” in Turkish, are visible from more than 10 miles away. 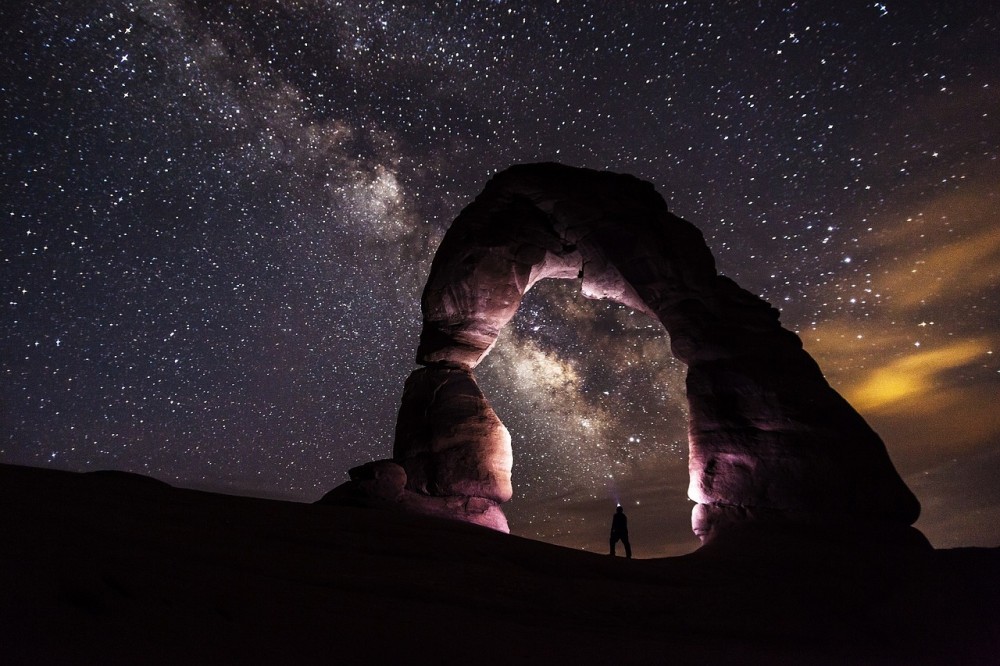 Photo by skeezeDelicate Arch is one of the most iconic arches in the Arches National Park in Utah, United States. It is a 60-foot-tall (18 m) freestanding natural arch, one among the 2000-odd stone arches in the park, but arguably among the most famous geologic features in the world.

13. The inspiration behind the ‘floating peaks' in the movie Avatar

Zhangjiajie National Forest Park, located in the Hunan province of China, is known for the pillar-like formations that are seen throughout the park. They are the result of many years of physical erosion. One of the park's quartz-sandstone pillars was officially renamed “Avatar Hallelujah Mountain” in honor of the eponymous film in 2010, for having served as inspiration for the “Hallelujah Mountains” in the film.

Deadvlei, which means “dead marsh”, is a white clay pan located in the Namib-Naukluft Park in Namibia, Africa. It is known for the skeletons of trees, believed to have died 600-700 years ago, that have turned black because the intense sun has scorched them. Though not petrified, the wood does not decompose because it is so dry. The blue sky, red dunes, and white pans create a striking landscape.

15. A seascape of towering limestone pillars and tiny islets

Hạ Long Bay, in northeast Vietnam, is known for its emerald waters and thousands of towering limestone islands topped by rainforests. The limestone in this bay has gone through 500 million years of formation in different conditions and environments. Because of their precipitous nature, most of the islands are uninhabited and unaffected by a human presence.

Well, that's about it. How many natural wonders were you able to identify correctly? Let us know in the comments below! There are many more amazing (and unusual) natural wonders in the world, and we will hopefully put together another post soon for you to enjoy and test your knowledge!

Get Better at Landscape Photography

If you would like to take your landscape shots to the next level by learning the essentials and using invaluable tips and practical advice, we have something for you – an ebook with 230-plus pages of indispensable knowledge on landscape photography. Click here to get The Complete Landscape Photography Guide.

Recognised all but the Wave Rock in Arizona, and the floating mountains in Hunan Province. But only been to 7 of them. But the more one travels, the more one realises there is to see, and as photographers the greatest sights are when the light is great, wherever you are. It’s good that the list included every continent… except Antarctica, which certainly has some stupendous landscapes too, though less well known.