When you bought your first DSLR, the chances are it came with what is known as a kit lens. This is usual a fairly cheap zoom lens that goes from a moderate wide angle to moderate telephoto. As you learn the craft of photography you probably want dabble in using different lenses. In this guide we will have at what types lenses are available and what all those number on them mean.

At the highest level, lenses can be broken down into two main categories, Primes and Zooms.

What is a Prime Lens?

Prime lenses have a fixed focal length, they can be wide angle or telephoto but they cannot change their focal length. The chief advantages of prime lenses are that they are more compact and can generally give you a better image quality. The main disadvantage is that if you want your subject to be bigger in the image, you will need to physically move closer.

The compact size of a prime lens by The Jordan Collective, on Flickr

What is a Zoom Lens?

A zoom means you can changed the magnification of the lens within a certain range. Most commonly this would be from wide angle to telephoto or from moderate telephoto to long telephoto. This makes them very versatile and means you do not need to carry so many lenses to cover all the focal lengths you may need. The disadvantages are that they are generally bigger and do not have as high image quality as a prime lens. 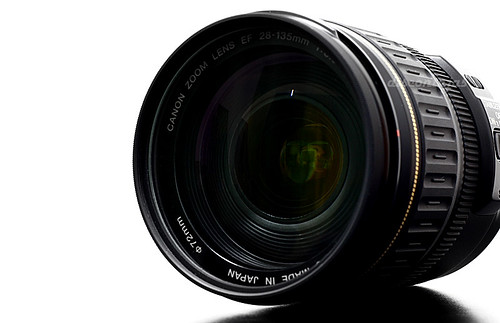 Understanding Which Focal Length Means What

So lets get to some numbers starting with focal lengths. How do we define what is wide angle and what is telephoto? Well, in the days of film photography this used to be pretty simple to work out. The human eye has a field of view that is roughly equivalent to a 50mm lens on a 35mm film camera. For this reason, before the availability of cheap zooms a 50mm lens was called a standard or normal lens. Anything less than 50mm was a wide angle and anything higher was a telephoto.

The advent of digital SLRs has muddied the waters a little bit because the size of most consumer class DSLR sensors, often called APS sensors, is smaller than 35mm film. Usually this is defined as the “crop factor,” – (most often 1.5). What this means is that 35mm film is 1.5 times bigger in area than the sensor in most (low to mid range) DSLR cameras. The knock on effect that a 50mm lens on APS will actually present as a focal length of 75mm (50mm X 1.5).

Lens manufactures have for the most part stayed with the 35mm definitions for the focal length of their lenses. The table below shows a comparison between common focal length lenses on 35mm sensors often called full frame and APS sensors.

Looking closely you can see that on an APS sensor, wide angles are not quite as wide as on a full frame camera, conversely telephotos are longer than full frame. This is due to the aforementioned “crop factor.”

The other big number we see on lenses is the F. number. This is the aperture number and defines how much light can come into your lens, otherwise known as the “speed” of the lens. A “fast” lens lets in lots of light and a “slow” lens, less.

The very fastest lenses are prime lenses, this is because they do not need complicated groups of lens elements to allow them to zoom. Some standard primes have apertures of 1.4 or 1.8.

Because zoom lenses are more complicated, they are generally slower. They can be broken down into two categories, fixed aperture zooms and variable aperture zooms. When you zoom into an image, with a variable zoom lens, you will find that the aperture gets smaller, for example from f4 to f5.6. This means that as the focal length increases, the amount of light falling on the sensor reduces due to the aperture closing (for mechanical reasons). Fixed aperture zoom lenses eliminate this by using much larger lens elements in more complicated groups. This is the reason not only for their increased size but also their expensive cost.

So, what lens should I buy?

Well the old adage you get what you pay for is very true in camera lenses, however, that does not mean you need to go and buy the most expensive lens. You need to consider what what you final output is. If you only ever look at images on screen or print them to a maximum of 8×10 inches then a cheaper lens is not going to be radically worse than a top end pro lens. If however, you often shoot in low light, producing stock images or making large format prints, then a pro level lens will definitely give you better results. Photo by Conor Luddy on Unsplash

One last word, if you are in the market for a new lens, do your research. There are a number of well respected sites that produce thorough lens reviews and these are well worth a visit (The famous DP Review for example). I tend to avoid forum discussions on lenses for the simple reason that people that own a particular lens will often covet it more than they should and not give an unbiased opinion.

Jason, thank you for the explanation, it was very relevant and helpful for me.