Canon has announced the new iteration in the PowerShot series with the G1 X Mark III. Purporting the APS-C 24MP sensor and Digic 7 processor, 3x zoom lens, which covers a 24-72mm equivalent focal length range, continuous shooting at up to 9 fps, and HD 1080p/60 video recording, the G1 X Mark III is an interesting compact camera offering with DSLR elements. 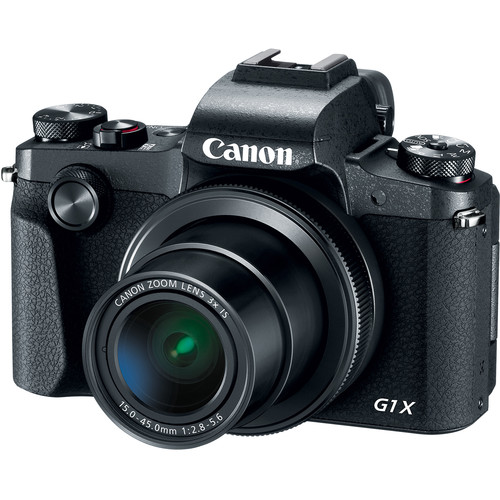 There seems to be a lot to like in Canon's new compact. It has a 24.2MP APS-C CMOS sensor and the DIGIC 7 image processor ensures fast performance. The ISO 100-25600 range should handle most lighting conditions with minimal noise though it will be interesting to see how it performs at the higher ISO ranges. Dual Pixel CMOS AF, which is the auto-focus technology found in Canon DSLRs, combined with image stabilization should provide for fast focusing for stills and video.

A redesign of the body means that this compact camera is dust and water resistant. It has a 3-inch rotating touchscreen, built in wifi and NFC. Bluetooth is also included for photo sharing and pop-up flash and hot shoe means you will have the option of using an external flash. Canon also notes that the new shutter release function mimics the EOS DSLR reinforcing the G1 X Mark III's “semi-professional” claims.

The Canon G1 X Mark III is a feature-packed compact camera, but there are a few “cons” that should be taken into consideration.

First up as  DP Review notes, the battery life is only CIPA rated to 200 shots per charge, and while this is a conservative rating, it will mean that you will need to carry an additional battery. Canon probably needs to do a lot better for battery life.

Further, while the Mark III shoots full HD 1080p video recording at up to a 60-fps frame rate, it doesn't feature 4K recording and with most of the mirrorless cameras and even your trusty smartphone capable of 4K recording, this may be an oversight on Canon's part.

Finally, the Mark III pricepoint is a fairly significant $1,299 USD.

Are you considering purchasing the Canon G1 X Mark III? Leave us a note in the comments

Angie takes care of bringing our books and guides to fruition by working with our awesome photographers, and you can get to know her better here.