Today we are going to do something a little different. Lightstalking has many many great articles advising you about both composition and learning new techniques, in short how to make your images “work.” In this article however, we are going to look from the opposite direction and have a look at why an image “works” by reverse engineering it.

The image in question is one that I took in the Antarctic during a highly unusual meeting of two ships in the lee of an iceberg. The image recently hit the top spot on 500px and at the time of writing it has over 2100 likes and 1300 faves. There are also 300+ comments on the image. So why did it work? 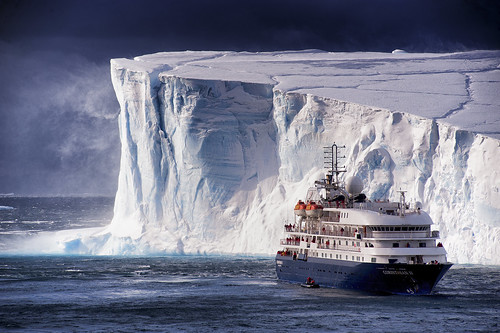 Why does this work? by Jason Row Photography, on Flickr

It has a story!

A good picture should always tell a story, leaving the viewer to question what is happening in the scene, to stimulate his or her imagination. This shot leaves us with a number of questions about the story. Where is it? Why is a cruise ship so close to an iceberg? Why is there a small zodiac inflatable beside the ship? Where was the picture taken from? They are all questions that add a sense of intrigue to the image inviting the viewer to answer his or her own questions. 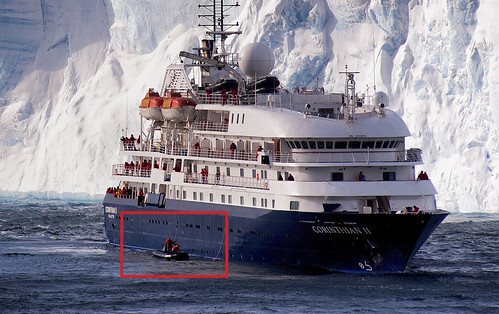 What's going on? by Jason Row Photography, on Flickr

Following on from the story, there is high drama in the image. As we mentioned, there is a small zodiac in the water, the sea to the left of the shot is white capping and the sky suggests stormy weather. Look closely at the end of the iceberg and you will see snow being blown from the top by the icy antarctic gusts. The shot reveals the insignificance of humans in the face of nature. 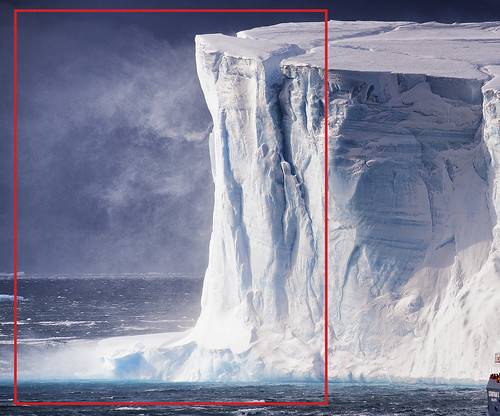 A dramatic scene by Jason Row Photography, on Flickr

We often see wonderful shots of icebergs, they are incredibly majestic wonders of nature. What we rarely see, however, is something that will give us a sense of scale of these ice monsters. The shot here reveals several scale comparisons – the zodiac against the ship, the people on the decks compared to the ship and of course both the people and the ship against the iceberg. The most striking aspect is when you look at the people on the back deck. It is here you actually get a true sense of scale of the iceberg, which ironically, by Antarctic standards is pretty small.

A sense of scale by Jason Row Photography, on Flickr

There are several compositional elements that have come together in this image that make it pleasing to the eye. Firstly it is well positioned on the thirds. The left side of the berg is on the left third. The top and bottom of the berg are pretty much on the upper and lower thirds and of course the ship is nicely placed to the right. The iceberg itself, also acts as leading lines to the ship, the top bringing our eye down to the bottom right where the ship is. The ship itself intersects the third, breaking up the image and making sure our eye stays on the ship first of all. There are color compositional elements working as well, the image is virtually monochromatic blue and white being virtually the only colors. Because of this, the image is relying on light and shade to give it dimension, which it does both in the sea areas and the side of the berg. 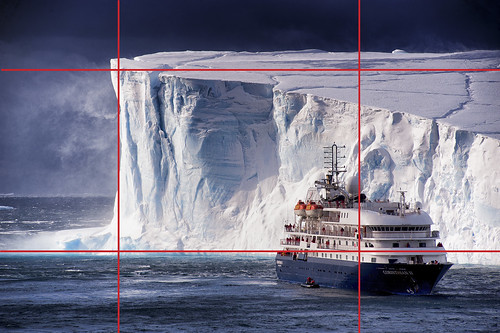 On the thirds by Jason Row Photography, on Flickr

The iceberg itself is deliberately shot so that you do not see the other end of it, this means that although you do have a sense of scale, you have no idea just how big the iceberg really is. Lastly the ice itself has texture you can clearly see the cracks and fissures in the surface adding interest to the shot.

All these elements have combined together to make an interesting and intriguing shot that works.

I am a strong believer in “getting it right in camera” and this shot is no different. It was shot on a Nikon D3 with an 80-200 f2.8 at 200mm. It was a bright day so I could use a high shutter speed to counter the rolling sea and an optimum aperture of f8. The image was shot in RAW, using the shoot to the right technique that allows you to get the very best quality from your sensor, it also allows you to pull back shadow areas without introducing noise. There is no cropping needed. 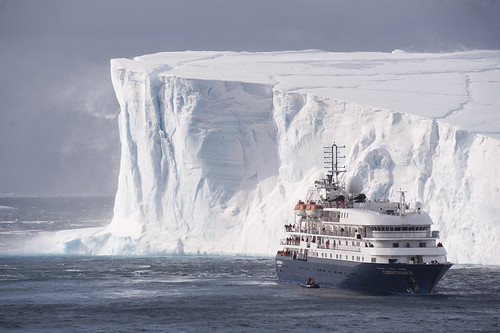 The unconverted original by Jason Row Photography, on Flickr

And the final version by Jason Row Photography, on Flickr

Out of the camera the image looks flat and slightly over exposed, however the histogram is within limits and with careful manipulation of the levels and curve as well as some selective editing on the sky and berg, it was possible to create the final image.

If you do not wish to know the story behind the picture, look away now.

What is going on here is that a passenger on the ship in the shot had had his luggage delayed at the embarkation port and the ship left without it. I was on another ship that had picked his luggage up and arranged for an Antarctic baggage transfer. The small zodiac is preparing to come over to our ship to collect the luggage. The small ship is using the iceberg as a wind shield as there was very strong gusting winds. The operation took about 45 minutes, was successful and provided me with a fantastic photographic opportunity.

Inte!resting…..both the photograph and the narrative. Thank you

I totally agree with you Jason. What is also true is that have such response does not happen everyday and for every published photograph. This can be seen on your 500px page where slightly different presentation of same event was far of the numbers of favs and likes. Even the number of views is modest. Sometimes a good photograph just happen, for some often for some never in a lifetime. Excellent work and case analysis.