Despite being the cutting edge of modern digital image editing, Photoshop borrows a significant number of its tools from the days of film. None more so than the Dodge and Burn tools. These two tools have been with us since the dawn of photographic printing and anyone who has spent a little time using an enlarger will know what they do. Today we are going to take a look at how to use their modern day equivalents in Photoshop.

Before we go too far, we should note that dodging and burning is a destructive process, in other words it can irreparably damage your image. To alleviate this we are going carry out our adjustments on a new layer.

After opening your photograph in Photoshop, from the menu select Layer – New Layer. Give your layer a name and from mode drop down box, select Overlay. Check the Fill with Overlay-neutral color (50% gray) box and click OK. We now have a new layer in which to work on.

From the Photoshop toolbox select the Dodge tool. This is the one that looks a little like a table tennis bat. In the days of film printing, a round piece of card or similar would be placed in the light beam from the enlarger. The purpose of this was to hold back the exposure in specific parts of the image, making it lighter. In Photoshop, the Dodge tool works in a similar way, allowing you to lighten very specific parts of the image. 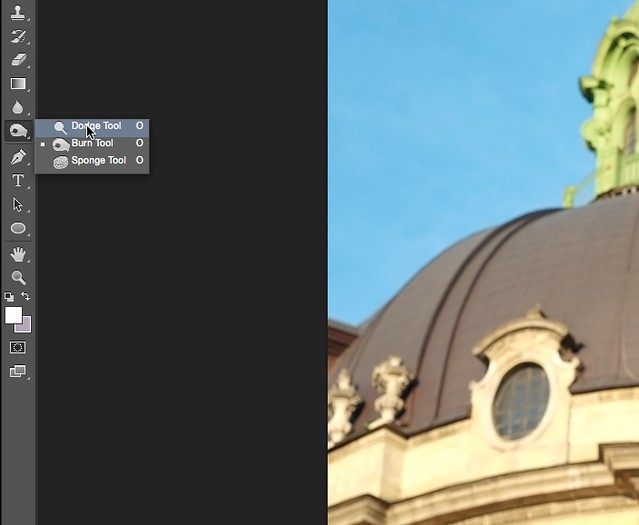 The Dodge Tool on the Toolbox

When you select the tool, you will see at the top that you can control the Range and Exposure and the brush size. The Range defines what area of an image you want to work on, from Shadows, Midtones or Highlights. If for example you want to lighten up a shadow on a models face, you might select Shadows, brightening a sky you might use, Midtones or Highlight. In general, you will find the Midtones range will give you the most pleasing effect. The Exposure slider defines how much lightening will happen when you apply it. 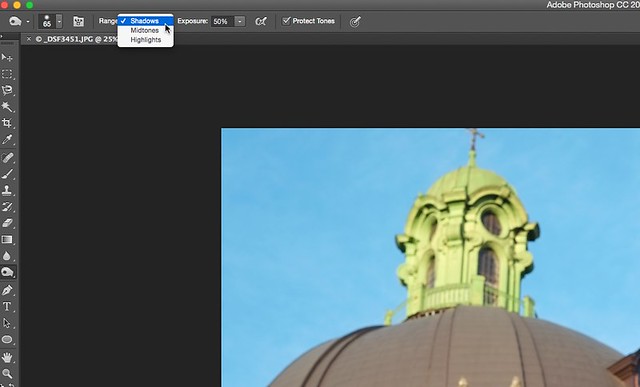 Using the tool is as simple as left clicking and painting the area that you wish to make lighter. However, if you own a graphics tablet such as a Wacom you will find the entire operation much easier as the stylus pen will give you various degrees of pressure and hence more control.

The effect is accumulative, in other words the more you paint over a specific area, the greater the effect. 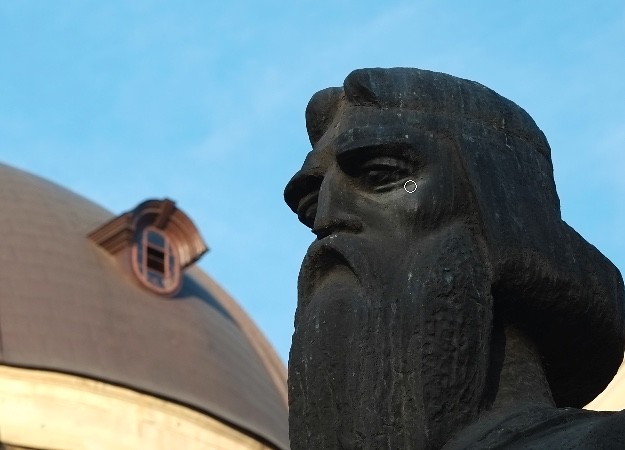 Dodging the statue's eye to make it lighter

The Burn tool is represented by an open clenched hand. This is because in the darkroom, printers would use this hole through their clenched hand to burn extra exposure into specific parts of the image, in other words, darken it. Again, in Photoshop, the tool works in much the same way, darkening specific parts of a shot. As with Dodge, you can adjust the brush size, Range and Exposure, and again Midtones will probably be most effective. 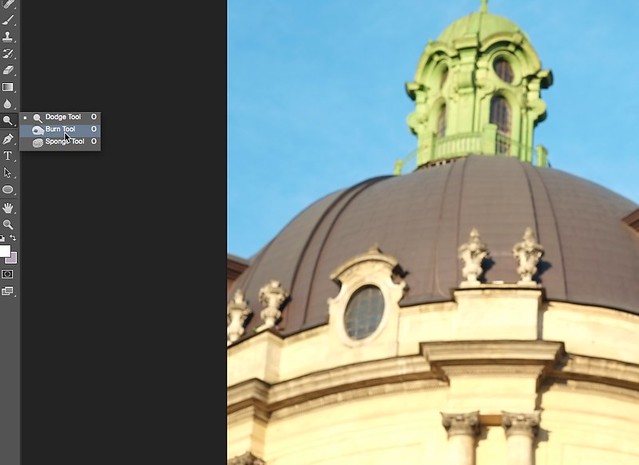 The Burn tool in the Toolbox 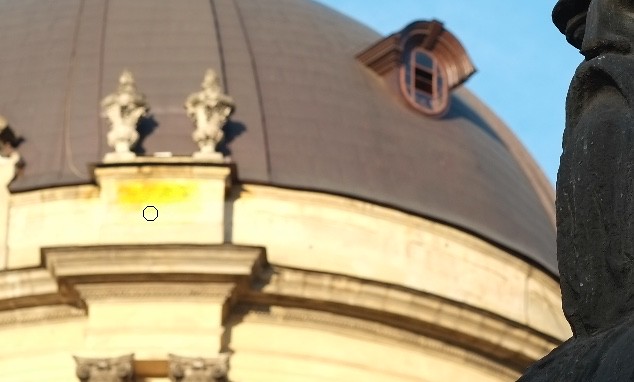 Using the Burn Tool to recover some highlight areas

To gauge the effectiveness of your Dodging and Burning, you can do two things. From the Layers palette on the right side of the screen, you can click on the eye icon for the new layer that you created. This will switch off any adjustments you have made and show you only the original image.

Conversely, if you switch the new later back on and switch off the original layer, you will see a 50% gray layer with lighter or darker patches, showing where you have applied the tools.

The Dodge and Burn tools are just two of the darkroom inspired tools we can find in Photoshop. They are excellent tools for carrying out highly targeted corrections to small areas of a photo. Used sparingly and in a separate layer, they can give you great control over the look of an image.