In recent years, Apple have been updating their operating system OSX on an annual basis. Their latest incarnation released to the world on 22nd October, breaking away from the tradition of OSX named for big cats, is called Mavericks and is available now from the OSX App Store for free.

As with other recent OSX releases Mavericks is a downloadable upgrade and the general consensus in the Mac community is that, like other OSX releases upgrading rather than a clean install is the best way to go.

Like it’s predecessors the upgrade route is, in Apple tradition, painless and simple. Once the installer has downloaded from the App store, it will automatically mount the DMG file, popping open the installation window. Clicking on Install Mavericks will shut your Mac down, and begin the update procedure, which will take around 30 minutes.

If you wish to do a clean install, you will need to create a bootable flash drive which is pretty simple and their are plenty of tutorials out there on how to do this. This year’s incarnation of OSX brings a lot of under the hood improvements as well as some interface updates, both of which include some significant features useful to photographers. Lets have a look at some of these.

Multi Screen Desktops – A lot of people were somewhat skeptical about this, after all both previous OSX incarnations and Windows both have this built in. However Mavericks has a twist – all of the desktops are entirely separate. They have their own menu system, own dock and can be used in full screen mode either individually or together. This means you can have open, for example, Aperture on one screen in full screen mode and Photoshop on another both with their respective menus at the top of each screen. This makes switching between the two easier than ever and will provide a definite boost to workflow.

Left Screen is 20in Apple Display, the right is a 24in Dell. Both can display menus and docks by Jason Row Photography, on Flickr

Airplay Display – Airplay has now been upgraded from a simple mirroring of your screen to a TV via Apple TV to a full featured extended desktop on your TV. Basically this means your TV can now become a fully featured second monitor and includes the benefits of multi screen desktops that we discussed above. This is particularly useful for owners of smaller screened Macs such as the Air and the 13” Macbook Pros and will allow you to present your photos to people on a large screen, wirelessly from your Mac.

Finder Tabs – For those photographers not using image management such as Aperture, finder tabs can be a useful way to move images to new folders. It operates in the same way as browser tabs, meaning you can have multiple finder windows open all tabbed together. With your front window containing new images you can now drag and drop those images onto the relevant tab and hence into new folders. Again particularly useful for small screen Macs where it is difficult to see multiple open finder windows.

Notifications – For the busy photographer working away in Photoshop or Aperture, it can be annoying being distracted by incoming emails. Notifications will display a small window detailing the sender and subject line, allowing you to decide if the email is important or can wait. New in Mavericks is the ability to reply direct from the notification window. Notifications work not only for email but for Messages, Facebook, Twitter and LinkedIn, useful for the multi networking photographer. 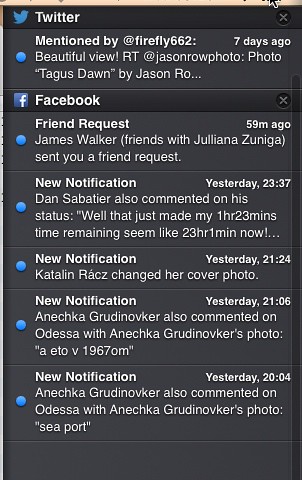 The expanded notifications window by Jason Row Photography, on Flickr

Some of the most major improvements in Mavericks are under the hood, things that may not effect a photographer visually but can make a big improvement to her workflow.

Timer Coalescing – This, in layman's terms, puts the CPU into a lower power mode in the micro seconds of idle time. The upshot of this is a big improvement in battery time, indeed on my 2011 Macbook Pro I noticed a 20-25% increase in battery time. 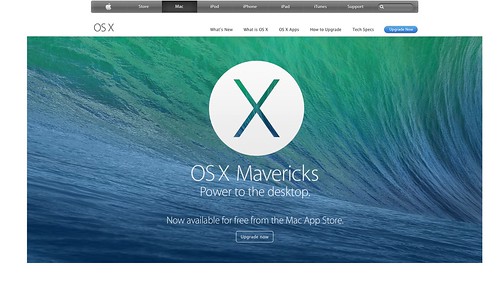 There are major performance improvements with Mavericks by Jason Row Photography, on Flickr

Compressed Memory – Mavericks does a number of things that drastically improves memory management giving a quite perceptible boost to the speed of your machine. I have certainly noticed that doing complex post production to large image files in both Aperture and Photoshop is significantly faster, as is scrolling through a large Aperture catalogue.

Mavericks on the face of it may not be visually much different from its predecessor, Mountain Lion, however, from a photographer’s point of view, things such as multiple full functioned multiple desktops, extended desktops via Airplay and the significant speed and battery consumption improvements make this a definite winner and for the price it would be hard to find reasons not to upgrade.

Don’t forget about tags. Useful in organizing those image folders.

OK some points here – but really superficial. Any experiences in using droplets for example? Which Photoshop versions does Mavericks support. Which legacy tools doesn’t it support etc.

I had issues with droplets going from Leopard to Lion and it was a pain in the a.

Any experiences anyone on that?

agreed, droplets for CS5 still dont work . . . third parties never seem to bother with the bugs for any software other than their latest releases.

After up grading to Lion (year and half back) I found I was having serious problems with printing values. After engaging a printing guru I learned one of my first problems was Lion and should stop procrastinating and up grade to Mt. Lion. The other dealt with ICC profile problems. Once those two items were addressed I was back in the saddle again. Is there any threads regarding printing and Mavericks?

The last time I upgraded to Mountain Lion it cost me thousands in software updates and countless down time to this day because 3rd party printer drivers arent keeping up with the compatibility . . . I still cant use some of my dye sub printers on the mac

Huge inconvenience .. . going to avoid upgrading for as long as possible!!