Photography has been around quite a while now and whilst there have been thousands of makes and models of camera, few ever reach the status of iconic. Today we are going to take a subjective look at seven cameras that moulded photography to what we know today.

This is perhaps, photography’s Ford Model T moment. A mass produced camera that the masses could afford. Launched in 1900 by Eastman Kodak the Brownie was simplicity itself, the earliest versions being nothing but a card box box with a lens. Costing just $1, it shot on 117 roll film and led the Kodak’s iconic slogan, “You push the button, we do the rest”

This remarkable camera remained in production, through many evolutions, right up until 1967 selling in the tens of millions of copies. The secret to it’s longevity was Kodak’s content ability to re-invite it, adding new features such as internal flash synchronisation and later an internal flash. The Brownie, more than any other camera in history, created the hobby of photography, and for that reason we must doff our hats to it.

The Box Brownie bought photography to the masses by Kevin Stanchfield

The Leica M3 is often regarded as one of the greatest cameras of all time. It was introduced in 1954 by Leitz who by this stage already had an enviable reputation for high quality cameras. Its innovations included the introduction of the bayonet mount, a combined viewfinder and rangefinder and a film advance lever rather than knob. It became the camera of choice amongst the street, documentary and war photographers of the day due to its rugged build, speed, ease of use and  image quality.

More than 220,000 M3s were manufactured and today mint versions can sell for large sums of money.

The greatest of all time? by Gary Pearce

If the Leica M3 was the icon of documentary photography, Hasselblad’s 500CM was the icon of fashion and studio work. Launched in 1957 the 500CM was designed as a new camera from the ground up. The defining feature was moving the shutter from the back of the camera to inside the lens. This allowed flash synchronisation at all shutter speed, in turn allowing the Blad to be used for flash shoots indoors and outside.

Other key features were it’s modular design. Multiple camera backs could be loaded with different films or the same film to enable quick film changes. Viewfinders and focus screens could be changed to suit the shoot. The 500CM remained in production until 1970 but remained in professional use well into the digital era.

The Nikon F was a little like the iPod of its time. It was not revolutionary but what it did do is combine a number of existing technologies into on camera and made them highly useable. The F saw the genesis of the Nikon F-Mount, a variation of which is still used on all Nikon DSLRs today. It was modular, featuring interchangeable viewfinders and viewing screens as well as the ability to add different backs such as a 250 shot roll back.

Its defining feature though was its ruggedness. It had been designed from the outset to be a strong, reliable and high quality camera. This attracted many of the world’s best photo journalists, who, combined with the Vietnam war, turned the camera into an icon. 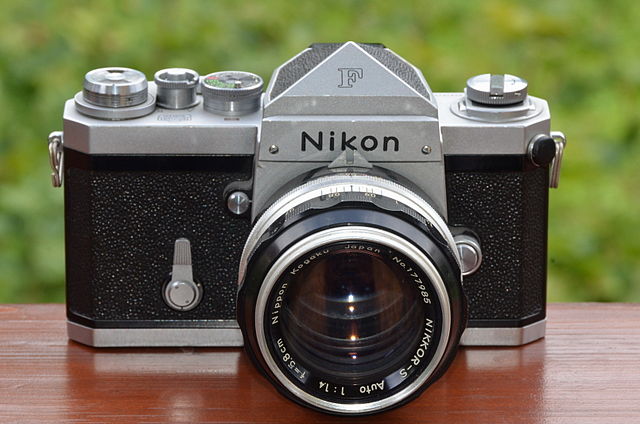 Some fifty years before the introduction of digital cameras, photographers is a hurry could still see their images instantly. Created by Polaroid founder Edwin Land, the Land camera was released in 1948. It produced small black and white prints directly from the camera in around one minute. By 1963 the cameras we capable of color prints and despite being low quality by the standards of film based images, Polaroid found its way into the professional market as a tool for previewing shots before they were committed to film.

The early days of digital had been little more than a megapixel race with Canon and Nikon vying to produce the best camera. Many had anticipated that the Nikon D3 would continue that race. Canon’s EOS 1Ds Mark ii had already been on the market for three years and boasted 16.7 Megapixels and a full frame sensor. Canon were trouncing Nikon in the professional arena. The announcement that the new D3 would only be 12mp was a huge shock, however once the camera started hitting the streets, all became clear. Nikon’s first full frame sensor concentrated on its low light ability rather than increasing MP. In this it was highly successful, pulling many sports, wildlife and documentary photographers back from Canon and restoring parity in the battle between the two marks.

The 5D Mark ii is unusual in that it makes this list, not because of it photographic pedigree but because of something else it introduced, video. Video in cameras was not new, but the combination of a full frame sensor with full HD video was unheard of. It was now possible to create cinematic, shallow depth of field video in a camera that cost 10th of the price of its camcorder peers. It utterly revolutionised low budget video production and enabled the careers of many independent film makers.

So there you have it, seven iconic cameras, each of which in it’s own way revolutionised the photography we know today. The list of course is by no means complete so if you have an iconic camera that you would love to add, why not post on our Facebook page.

For me, the amazing workhorse Nikon F3HP has to be one of the most iconic cameras of all time. I owe it so very much…

Just a comment that you left out the Argus C-3, which did more for advancing 35 mm photography in the U.S. like the Brownie did for roll film.

Argus C-3.. THE BRICK!! I agree with Jack about this

Argus C-3: THE BRICK!! I still have mine on display in a bookcase..

Agreed C3 introduced so many to 35mm. Work horse and iconic design!!

Olympus XA — progenitor of thousands of 35mm compact rangefinders and point-and-shoots that followed.

In fact, my XA turned me into a lifelong Olympus devotee which continues to this day with my current love, my Olympus E-PL1 which looks like a sort of latter-day Leica and provides me with astonishingly gorgeous images.

I remember The original Brownie, but owned the next generation brownie, which was made of black plastic and had an eye level viewfinder, which I used in the late fifties on school trips. My first job was in the leisure industry and we used Leica M1 and then the M3, having 11 holiday centres with a small army of photographers using them. For some of the larger formats we used Rollieflex TLR’s and Mamiya C3’s and later the Mamiya C33 and then the C330’s. I have owned a 35mm Canon EOS, then a digital EOS and have to say I preferred the digital purely for the cost per shot, brilliant quality build and good reliability.

For pure novelty value I tried the Polaroid Land camera, but the image quality was awful, so stuck to 35mm use and 120 roll film for larger format use.

Now I have retired the Canon has gone and been replaced with Sony Alpha’s and a whole variety of lenses, as they are much cheaper than the Canon and easier to replace as the increases in Megapixels make them obsolete. I guess the megapixel race has slowed so I might try to afford a used canon EOS if I can find one at the right price which has 16.7 or more megapixels.

I used to own a Topcon camera. What happened to those?

What? No Kodak Graffiti?!