Many photographers don’t have steady hands, in fact even if you think you have steady hands, you probably still can’t pull off decent low light photos at an exposure of half a second, believe it or not. However, there are many lenses on the market today that offer image stabilization. Understanding how image stabilization works can help you use it to your advantage for more than just getting sharper images in half second exposures.

How Does Image Stabilisation Work?

Essentially, when a lens includes image stabilization, the optical elements in it are surrounded by electromagnets which makes them float. When motion is induced the electromagnets guided by gyroscopic sensors compensate for the motion in the opposite direction, thus effectively removing a lot of vibration from the lens and its effects in the final image. Image stabilization in the sensor works pretty much the same way, just instead of the lens, the sensor is the one that compensates for movement.

Most lenses with image stabilization boast stabilization around 4 stops. However you need to understand that the lens will help you get a 4 stops sharper image against a subject that is stationary. For subjects in motion, the old rules still apply (faster shutter speed in order to freeze the action) or else you will get motion blur.

When to Use Image Stabilisation

Panning. Some lenses feature image stabilization which can be turned on just for the vertical axis, which can let you have that smooth motion blur when panning, while maintaining more of the object in motion in focus because the lens compensates for the hand movement that goes up and down. Not that regular panning doesn’t work as well, but it is different since it compensates for every movement and the motion blur looks a bit jagged in comparison. Note that this doesn’t occur with every image stabilization system which doesn’t allow per axis usage.

For example, here is an image where the motion blur is smooth and creamy:

And here is an example of a jagged one: 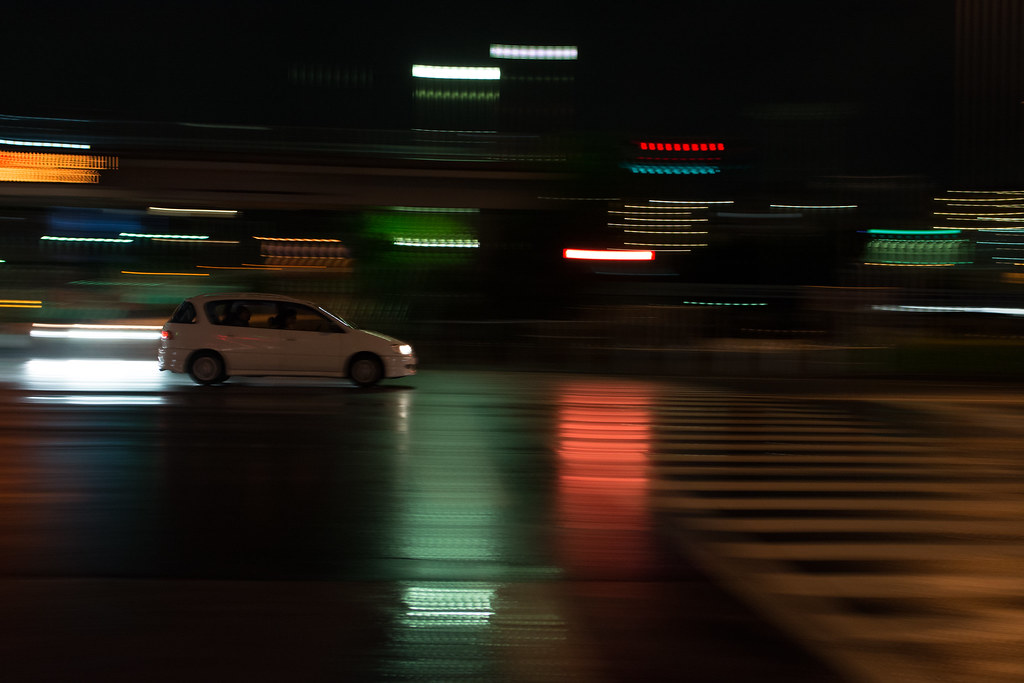 Bear in mind that the jaggedness can occur due to flickering lights as well. Everything that is led or similar flickers on 50 or 60 Hz, therefore in an exposure that lasts half a second that light will flicker 30 times, and when you pan, that flicker will show. The result is very similar with image stabilisation, just that it occurs even on sunlight when there is no flicker at all.

In Motion. Another scenario where you can capture motion while using the stabilising function of the lens is when you are in motion. For example, if you are shooting from a moving car. No road is smooth enough to avoid any vibrations or movement for your camera in that situation. Therefore image stabilisation can be particularly useful, especially for sports photographers and the like, who often follow marathons, bicycle, triathlons and so on while mounted on a car or a pickup truck.

Low Light. When it comes to low light scenarios, image stabilisation technology shines. When using flash for indoor photography for example, you can sync the flash to the second curtain and set the exposure to capture the ambient light in a scene. When you have the stabiliser on, you can go further with the exposure and gather more light, without having any blur created by the longer exposure, while the flash will cover the difference to the correct exposure.

When Not to Use Image Stabilisation

However, if you are going to do long exposures on a tripod, it is wise to turn off image stabilisation. As good as it is, it can be damaging, as it can induce motion when there is none. Although this happens rarely, and mostly with older models of stabilisers, it is not worth the risk when you have your camera on a tripod, because image stabilisation works from the time you press the button to focus untill a moment or two after the exposure ends.

In the meantime, it drains the battery – not much, but still a little. I’ve noticed that I have around 30% less shots per charge when using stabilised lens. It varies from model to model, but it is worth noting.

Another fact about image stabilisation, since there is physical stabilisation in the lens, is that it stabilises the image in the viewfinder as well. For about 10% of photographers it causes headaches due to eyestrain when used for more than an hour!

When should one turn off image stabilisation, on tripod?

Larry, it can have adverse affects in very low light situations. I have had it cause blurring when I forget to shut it off for night photography during long exposures.

A very concise article, well written and laid out..
I would add, under A Few Downsides, that stabilized lenses are more expensive than non-stabilized ones.
I also respectively submit that you could have noted that the same when and when not to use rules also apply to camera systems that incorporate in bode stabilization , Olympus and Sony.

Thanks, this is good to know.

LED lights usually operate on a DC voltage that should not flicker. I will take some photos of LEDs to check this out. Has anyone else noticed this flicker?
Randy