Recently, we were lucky enough to receive a review copy of Kevin Kubota’s Lighting Notebook from the good folks who work with Kevin. It’s a new addition to Kevin’s already impressive work in education material and we have been going through it quite thoroughly. For those of you who like the detail of a “how to” guide when trying to figure out how certain images are taken, then this might well be for you. This is the literary equivalent of looking over a working photographer’s shoulder as they shoot. Oh, and Kevin was nice enough to autograph it too – nice touch! 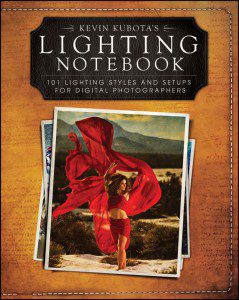 So what’s it all about and who is it for?

Who is Kevin? – Kevin Kubota is a prolific photographer and educator who is both a working photographer and also writes books, publishes learning material and software. American Photo Magazine named Kevin as “one of the top 10 wedding photographers in the world” who has worked with companies such as Nikon and Adobe.

What Is the Lighting Notebook? – This is a 292 page soft cover book with hundreds of diagrams and detailed explanations. As for the information it provides, it is basically an opportunity to see exactly how Kevin gets the shots he gets in 101 different situations. It’s not hugely technical and fits largely in the “how to” category for those who are interested in the exact lighting setups that a photographer can use to achieve specific outcomes.

What’s In It? – As the subtitle would suggest, this is a rundown of 101 different lighting setups that Kevin used to produce 101 images.

Each setup is set out in a very logical way. The final image comes first. It is followed by a lighting map (where every piece of gear as well as the model and camera are plotted for you), a photograph of the overall set as Kevin shoots the model, and the image as it came out of the camera. This is basically as much relevant visual information as you could logically put into the book.

Accompanying that is the relevant information that so many people seem to want to know about any good photograph. What camera settings were used. What camera gear was used. What lighting equipment was used. In addition to that, Kevin also rates the setups by cost (of equipment)

Every lighting setup gives you the exact blueprint that you would need to replicate the effect for yourself. Very little guesswork is left.

You can get a good feel for each section of the book from the page image below. The layout and information presented in the book is very logical, uniform and most importantly, actionable. If you want to emulate any one of the image effects that Kevin presents, you have all of the information that you could possibly require, short of going and shooting with Kevin live. 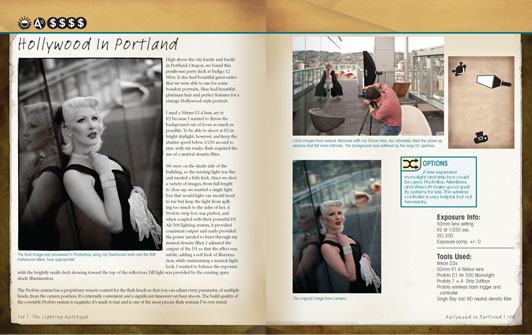 A cool little section at the back of the book also lists Kevin’s exact equipment (light modifiers etc), model numbers etc as well as websites on which to find them. If you are willing to, and have the cash, you can emulate the exact setup Kevin uses and the exact tools he uses to get the effect.

Who Is This Book For?

This is a book for people who are striving for an understanding of how to achieve a bunch of great lighting effects. It can be a little gear heavy, so be prepared to beg, borrow, steal or buy some gear, but there are enough effects on the cheap end to keep everyone happy too. It’s a great book to get ideas for shoots and to find out how similar effects were achieved. Well worth a look.