The rivalry between camera makers has raged for decades and the competitive nature of the camera industry means this has resulted in spectacular advances in consumer cameras. As our little contribution to keeping the rivalry heated, we decided to ask Light Stalking readers what make of camera they shot on. 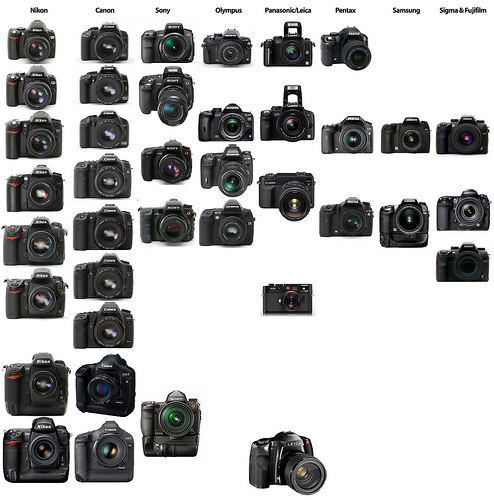 Now there are no prizes for guessing the top two with Canon and Nikon coming out well ahead of the rest of the pack. It was a little surprising to us that these two weren't slightly closer in the reader vote.

Surprisingly to us, the third place getter with 42 votes was “other,” which narrowly edged out Olympus! The discussion among readers made it pretty clear that many felt the omission of Pentax from the list of contenders was a major oversight by us.

Light Stalking reader, Thomas said, “Shocked that Pentax wasn’t among the choices. They were a BIG name in photography and still make fantastic cameras. No other maker offers weather-sealed cameras at such a low price point. The Pentax K-x is currently considered to be the best entry-level camera from any maker.”

In our defense, the list of contenders we chose was based on what Flickr lists as the most popular cameras among their users and Pentax comes in under the 6 we listed.

It is great, however, to see the level of passion among photographers for their chosen make of camera. Such a competitive environment will ensure manufacturers continue to innovate and provide us with better and better technology.

Thanks for the follow-up. Pentax wasn’t among the original choices but you more than made up for the small “mistake” :). Continue stalking! 🙂

I am so happy someone is standing up for Pentax!! My choice for the past 20 years already.

Thank you, I’m glad it helped !

Hello, just doing some research for my Olympus site. Truly more information than you can imagine on the web. Looking for something else, but very nice site. Have a good day.