Since I don’t own a lens which is wider than 18mm (pair that with a crop sensor as I do, and you can see the problem here), the only option I have for capturing a scene is to stitch several photos together. This is somewhat like using a wide-angle lens, but more complicated. The extra work doesn’t mean that you can't get results that are just as satisfying.

In this article, I’ll walk you through the process of photographing and then stitching and editing the picture. I'll use a picture which I took a year ago in Bratislava, Slovakia.

First of all, I must mentioin that I prefer shooting in portrait mode, and I have about 30% overlap between images. Many photographers I know use PtGui for stitching the panorama. However, Photoshop does the job just fine for me. PtGui does a better job if you were to do a 360 degree panorama, which we're not going to address right now.

So the image will consist of 11 portrait photos, which are loaded up in Lightroom. Once loaded, I select all of them and execute exactly the same settings on all of them. I treat the images as if they were one.

You may well ask: “why don’t you stitch them first, and then edit them?”

The answer is that after I stitch the images, I end up with a .tiff file, not a RAW file. That means that I lose decent amount of information (even though .tiff is uncompressed, it doesn’t equal a RAW file), so I edit what I can on the RAW files before stitching. If necessary, I do minor edits afterwards.

It is important to have the toolbar pulled down as far as possible in order to see what is going on when you do the changes. Also, when we are compensating for the exposure using Whites and Blacks, we switch to the adequate images in order to be able to do the job more precisely. 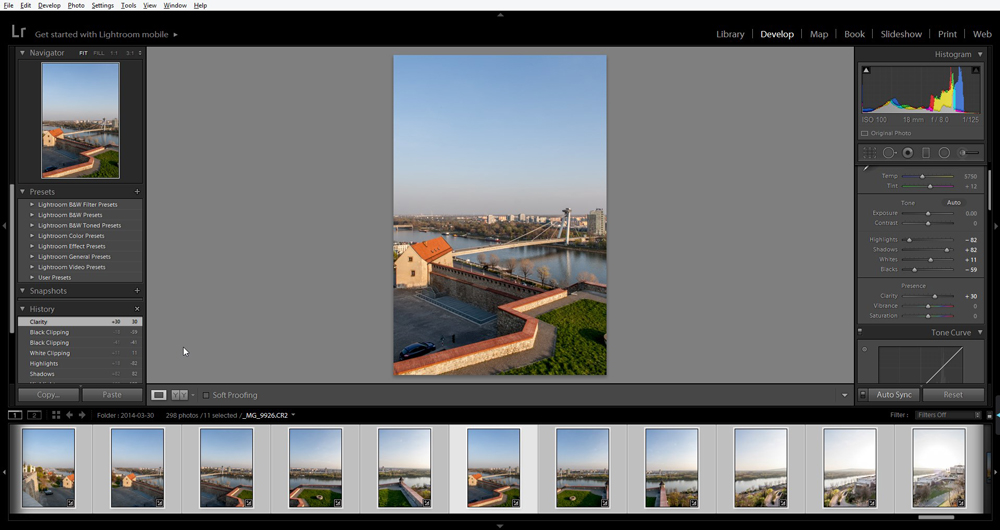 I love having some blown out areas around the sun in the images. That is a personal preference; it doesn’t mean that you have to do it like that.

Using the most right image (which was shot directly in the sun) as a reference, I pushed the whites slider just before it clipped. You can do this by holding “Alt” while moving the slide. It will show the clipping as white areas on the black mask so you’ll know when you went too far.

The same goes for the Blacks,  but in this case I used the middle photo, since it had the darkest area. By holding the “Alt” key while moving the sliders, I was able to judge whether there was clipping or not. I pushed the Blacks slider into the negative area and stopped just before it started clipping.

Since the weather was a bit humid and hazy, I added some clarity to increase the local contrast.

I like my sky blue, and since I can’t use polarizing filter on that lens (it isn’t really efficient in a panorama-mode), I will manipulate the sky by using the color sliders. Remember that I still have all the images selected, in order to avoid tonal differences between them. 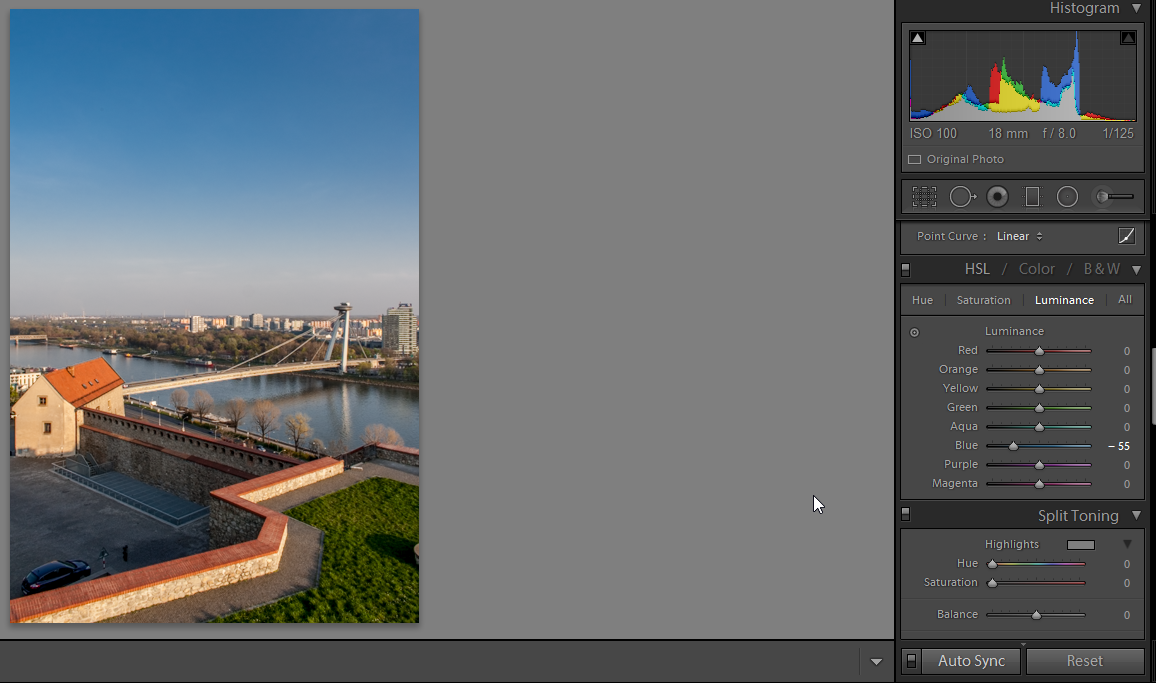 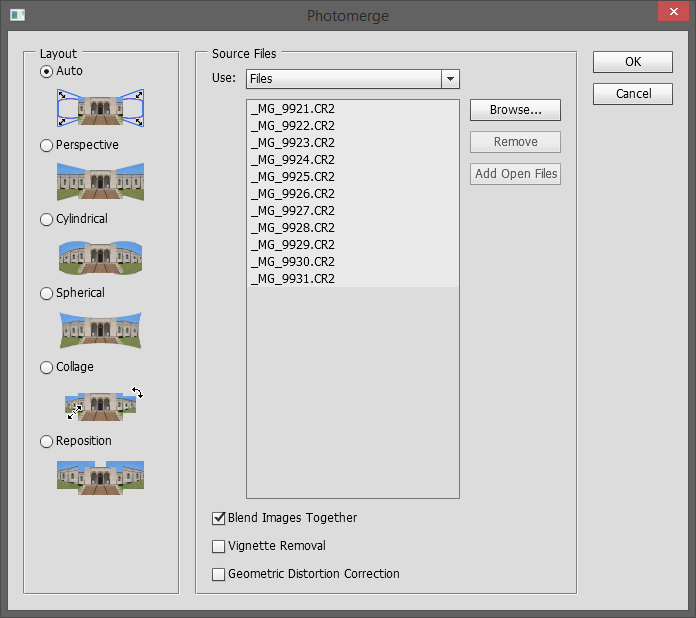 After some time, you will have the final image merged and ready. It is normal for the process to take some time. In my case it took around 7 minutes to fully finish with the stitching and aligning the image. On lower end computers it might take even longer.

Now the image isn’t perfect, it will have corners missing and things like that. The options are either crop them, or fill them. I tend to do both where necessary for sake of composition. 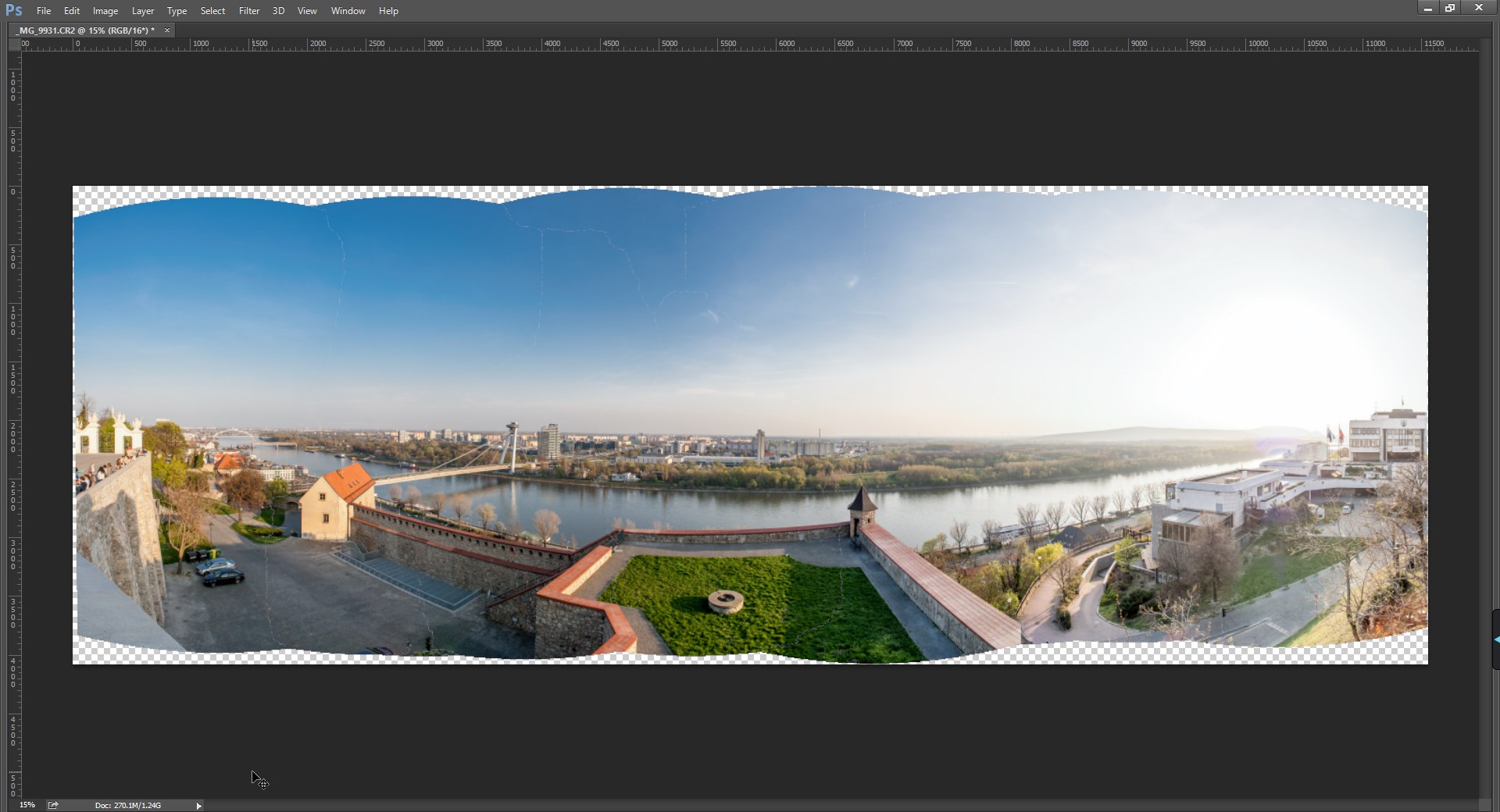 After I am done tinkering with the image in Photoshop, the next step is to load it back into Lightroom in order to make use of the Graduated and Radial filters there.

First of all, I’ll add some warmth and contrast to the blown out areas on the image to make it look more like the sun (even though it really is the sun) and to create color contrast on the sky, which makes the image more interesting. It is a sunset after all, and it should feel that way. So the Radial filter on the side has the highlights pulled down, so as to leave room for the warmth to seep in, and the contrast is increased to bring back some of the detail washed out from overexposure. Color temperature is around 30% towards the warm side. 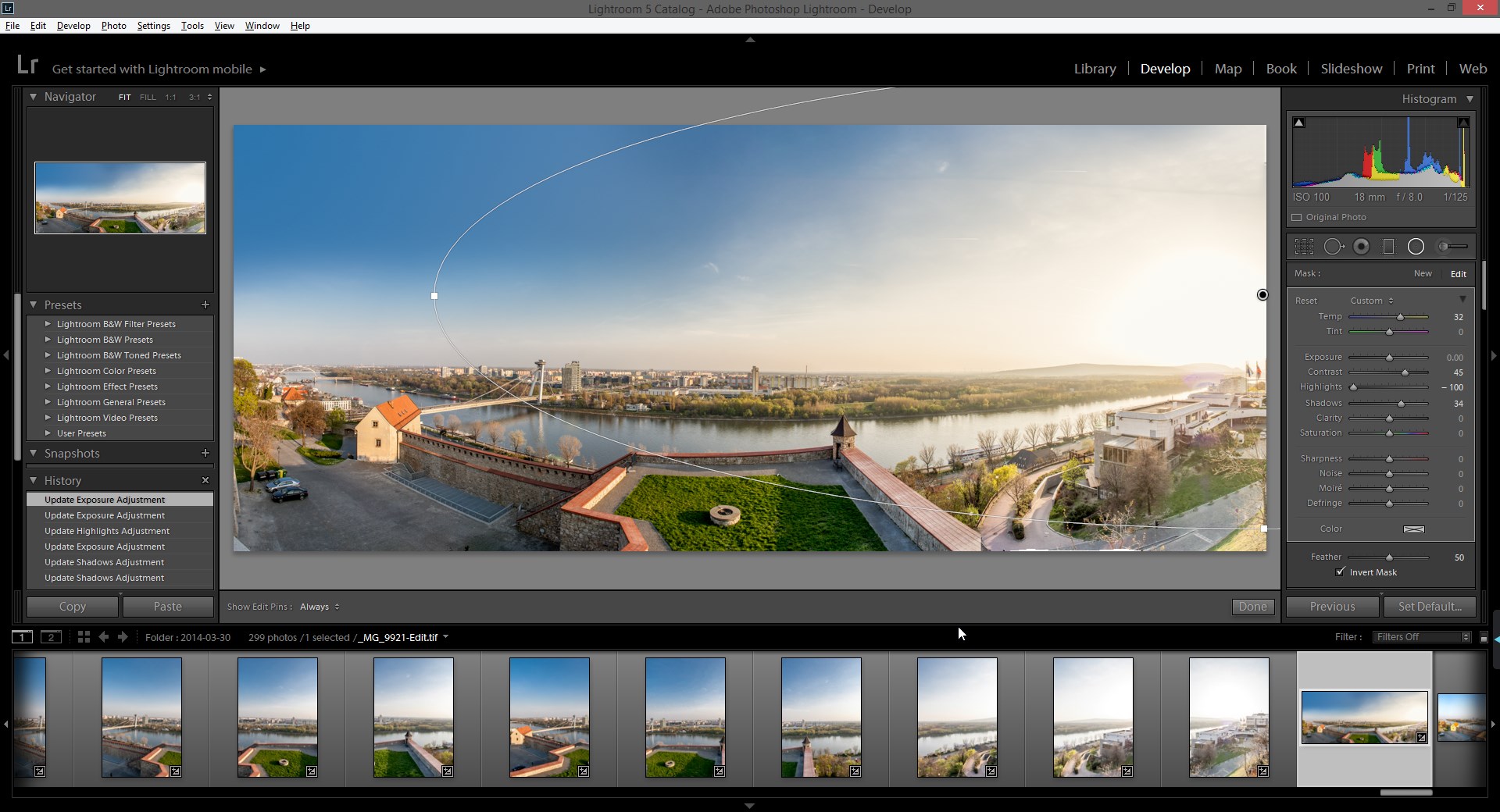 Minor adjustments with a Graduated filter are made from the bottom, up. That's all. The image is complete. 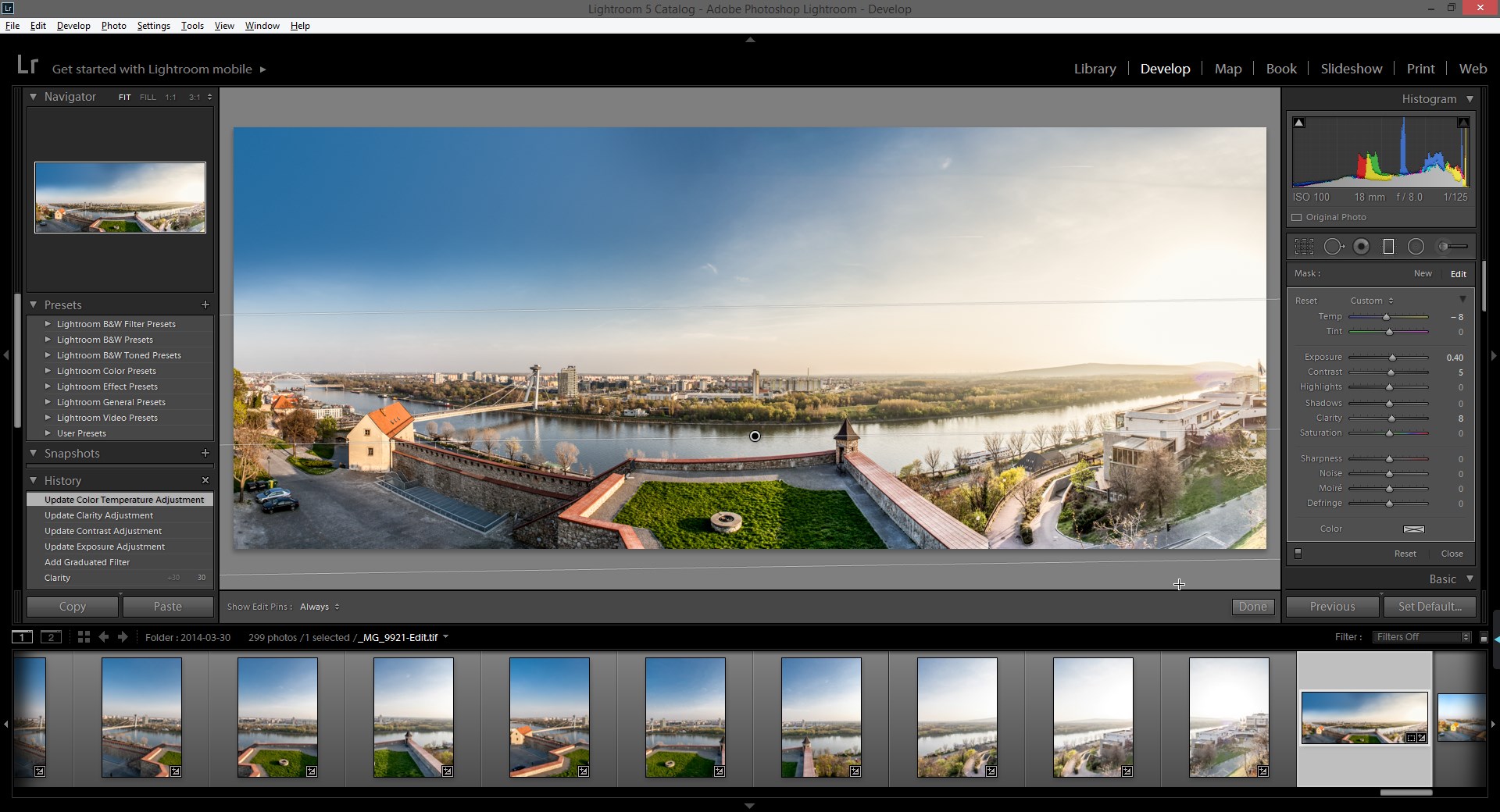 This is how I compensate for not having a wide-angle lens. It takes a bit more work, but It can be a really cool way to achieve interesting results. I know photographers who are doing this with wide-angle lenses as well, creating large panoramas, which are quite different from a simple landscape shot. You can use this technique anywhere and in any way you please.