Before we go any further, let’s just say that as my somewhat podgy fingers pound the keyboard of my laptop, my tongue remains planted firmly in cheek. Today we ask “what type of photographer are you?”

In recent times, the species commonly known as the Common Photographer has enjoyed somewhat of a renaissance – their numbers have been growing steadily to the point where they are now a regular sight in both our towns and countryside. Although the numbers have increased, they can still be broken down into several specific sub species that we will now take a look at.

Mike is a throwback from the days of film. He feels the need, the need for speed, and as such his camera is always set on high speed continuous mode. You will generally hear mike before you see him, the takatakatak of his shutter firing 10 times a second is often accompanied by birds suddenly flying into the sky and cats running at full speed away from him. He will often explain that he is bracketing his shots, but when you see his images on his very fast laptop, it is usually a sequence of 100 shots, all the same exposure. In one of the shots, the subject will be both well composed and in focus. 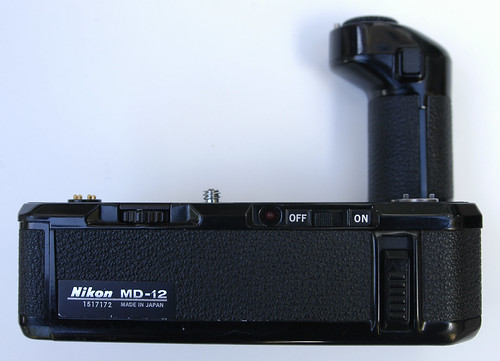 Machine Gun Mike loves the sound of 10fps by Steve Bowbrick, on Flickr

You may not often see Candice, for this sly photographer is often concealed behind lampposts, cars or other urban camouflage. Sometimes, the first hint of a Candice in the area is the glint of sun reflecting from the front element of a telephoto lens. Nearly always in the vicinity of a Candice will be an old person struggling with the shopping or a homeless man with a strange looking dog, entirely unaware that they are about to be immortalized in a jpeg form. 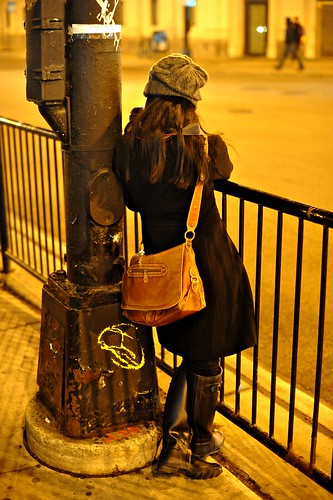 Candid Candice fires off a sneaky one by Viewminder, on Flickr

Every photographer’s club or group has a Simon in its midst. Simon is the quiet, thoughtful one who seems to take the pictures nobody else sees. Although for most of the time he merges into the background, when asked a question about photography, he becomes a positively animated orator. There is little that Simon does not know about photography and photographic technique, and once you manage to get him started, it is virtually impossible to get him to stop.

Eddie is a masochist. He likes nothing more than spending the entire day carrying a tripod that is entirely too big for the equipment he is using. To Eddie there is no such thing as a casual snap shot, all images need to be carefully composed by placing the camera on a tripod. No matter what the light or subject matter, Eddie’s camera remains firmly planted upon his three legged friend. Some Eddies have been known to wander their environment with the camera still on the tripod, a risky venture that they believe is the mark of a true enthusiast. The rest of us, of course, just wince as he bashes his expensive DSLR into the top of a stone doorway. 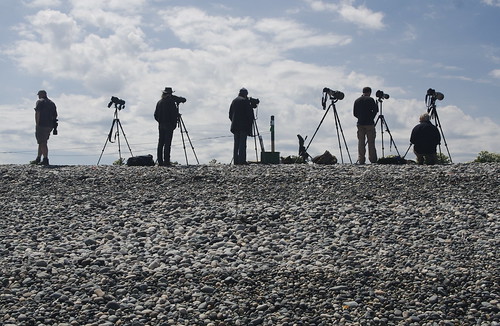 Steady Eddieson a day trip by Eifion, on Flickr

Look hard, and you will  see The Contortionist. They are very often found low to the ground, twisted into odd positions whilst trying to get a shot of a single flower. They have an amazing ability to squeeze themselves into stupidly small locations all in the name of art. They have incredibly flexible limbs that allow them to stretch themselves across car bonnets, out of narrow windows or to lie in a tiny space to get a low angle shot. 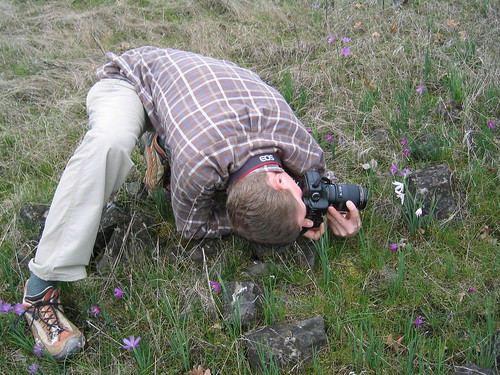 Everybody knows a Gary. He is the guy that wanders the streets laden down with every conceivable piece of equipment ever made. Around his neck will be several DSLRs often with the same lenses. One of the DSLRs, however, will have a 300mm f2.8 attached. At least two of the DLSRs will have flashes and each will have a bright garish camera strap pronouncing the name of his chosen brand. On his back will be a pack the size of a small car from which will hang a tripod, a monopod and a water bottle. He will also be the only photographer for miles wearing a photographer’s vest. Garys, for obvious reasons, tend to move slowly and with so much weight on them, they develop their own gravity fields meaning they get bumped into quite often. Never hold a door open for a Gary, you will lose a significant amount of your life waiting for him to maneuver through.

So there we have it, a look at the most common sub-species of photographer. I personally may fall into more than one of these genres, what about you?

I would be The Contortionist and Candice.
I used to try carring a lot of gear and have a vest that is too big (we used to get some Canon promotional items, like the vest from the pro shop when purchasing items). Now, I rarely take anything but an occasional beanbag and my camera with a prime lens on.
I even blacked out the “Canon” on my strap. I am just not as carefree as I was when I was younger.

I’m Candice and the contortionist too! I think the only difference between us is that I’m a Nikon girl =P

I’m definitly the “Machine Gun Mike” guy, but I photograph animals and I need such much speed … ^^

I come closest to being a “Machine Gun Mike” but I have a reason! I am left eyed and in the old days of film I had to pull the camera from my eye in order to cock the shutter for the next shot. I didn’t have the motor or winder on “continuous” all the time but I sure needed it to keep the camera at my eye as I either followed the action or framed the next shot.

I am also left-eyed and can relate!

This is hilarious. I, too, am most like the contortionist and Candice. I would add to this list Bagless Bob. He’s the photographer with a MkIII who for some mysterious reason doesn’t even own a camera bag to carry it in. Oh wait, the reason’s not that mysterious – he wants everyone to know he owns a MkIII!

I second the Bagless Bob recommendation. A friend of mine recently visited me from another state and brought his DSLR. I was horrified to realize that not only does he not have a bag for it, I’m not sure he owned a lens cap. When i asked him about it, he said that was what the UV filter was for. I got a glimpse of the UV filter… Not sure how those shots came out!

Definitely Machine Gun Mike here. But when shooting kids, it’s almost a must to capture their fast-changing facial expressions!

I’m very much a landscape guy, so I usually fall into the Steady Eddie camp. My excuse is that I often need to use f16 at sunset/sunrise.
On summer days I sometimes become The Contortionist in my attempts to get interesting shots that other miss!

Contortionist Machine Gun Mike. I do nature photography, so both come in handy!

Definitely Steady Eddie, though my tripod might be biggish it’s not too big for my camera, also The Contortionist, because flowers and plants seem to like awkward places.
But surely, since I come from film days, Machine Gun Mike is a recent variety, couldn’t afford the film but digital is “free”.

Somewhere near the Eddie and Mike. Love the tripod and like to catch fast moving critters.

Definitely an Eddie and Simon. If it’s Oz or NYC, I’m in the middle of nowhere with my tripod waiting for something no one else sees.

Great fun article. Missed Santa with the huge worn over stuffed bag full of trinkets and two of some so you might try his favorite toy. This Santa knows it all from A -Z but never shares a photo Santa actually had produced.

Contortionist machine gun. I shoot nature, preferring snakes, which are never found in an easy to get to place, and the moment you walk up they slow down tongue flicks, which I try to catch because not everyone has that shot.

Definitely not Machine Gun Mike.
Occasionally Candid Candice, for special events I like those candid shots from a little distance. With more people around, no one really notices me.
Mostly Simon the Sage. I keep busy doing “interesting” things and I’ve been at it 45 years.
Not a Steady Eddie. But, a tripod is necessary at times.
Definitely not a Contortionist. I’ve taken great close up shots of a flower from 8 feet away or from 2 centimeters without having to crawl up to it.
And, I used to be a Gear Guru Gary, long ago. That ended when I realized how much more I could accomplish with less. Nowadays there are halfway decent not-pro cameras that have a lot of features that can help someone create art in high quality. It’s who’s behind it and what they “see” that matters.