Twenty-year old Noa Jansma posts pics with men who whistle and yell at her.

Noa Jansma is your typical twenty-year old student studying design in Eindhoven, Netherlands. And like many women, Noa Jansma is no stranger to unwanted catcalls from men on the streets as she passes them. In a series of portraits with her catcallers posted to her Instagram account (@dearcatcallers), Noa Jansma posts pictures from over the course of a month in which she catalogued the men who chose to catcall her. 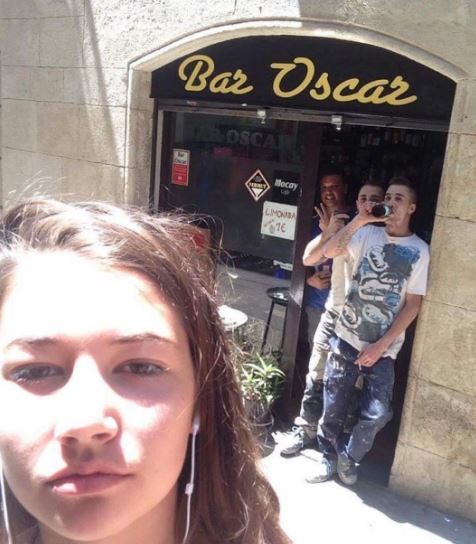 The men run the gamut of ages, from young men that look like they work in construction, to older men up unto retirement age, demonstrating that men who engage in the act can from any background and of any age.

What is shared among these men, however, is a lack of common decency. A BuzzFeed comment hilariously says: “”Mom, how did you and dad meet? I was walking home and your dad yelled from his car that my tits looked good and then honked. It was love at first sight. SAID NO ONE EVER!”

Noa Jansma’s project was spurred on by a class discussion with fellow female students in which she realized, while some women had experienced what she had, not everyone was willing to talk about it, and some of the men even struggled to believe it was a problem to begin: “I realized that half of the class, the women, knew what I was talking about and lived it on a daily basis. And the other half, the men, didn't even think that this is still happening. They were really surprised and curious. Some of them even did not believe me.”

Over the course of the month, Noa collected 24 pictures, all with the permission of the men on the street. Some men thanked her for bringing this to their attention while others did not care to change or engage.

She goes on to point out that not all catcalling is done with malicious intent but the effects of it are often negative. Many of the men thought they were complimenting Noa: “But most of the time they have their thumbs up, they're happy because they honestly think that they're complimenting me. They really didn't care about me. They never realized that I was unhappy.”

In what many classify as a classic bout between power and control and respect for individuals, Noa is quick to point out that the catcalls make her feel vulnerable. In fact, the photographer did not take pictures with all of her catcallers, particularly those that did it when she was alone on narrow streets or at night.

While she has experienced support and praise for her project, it is not without its detractors. Some men have thanked her for bringing this to their attention while others have questioned the veracity of her claims.

Bringing awareness to this issue was Noa’s goal, not featuring herself in a series of pictures. Along those lines Noa hopes other women take up the mantle and highlight the issues faced by women in modern society.

Sad. I think this is an excellent example of where photography can help with social change.