With Google pulling off support for Nik Collection and announcing that it will no longer be making any additions to the collection or adding new features over time, there have been concerns about this news with most photographers who have relied on this software for their workflow.

In the future, when Microsoft and Apple release updates to their OS, or when Adobe releases updates to its products, users will have to deal with incompatibility issues. That might be next month, or it might be in three years, but the fact that support has been removed means that whenever it happens, the Nik collection will eventually become unusable.

What is the History?

The Nik collection is a set of image enhancement tools and photographic plugins for Adobe Photoshop, Elements and Lightroom and was initially owned by Nik Software. This collection was originally priced at $500, but after Google’s acquisition of the software including Snapseed (for desktop and iOS) in September 2012, the price was dropped to $150 in March 2013. Many users were happy with this price drop and this must have also led to more users buying this product.

In March 2016, Google announced that they were making the Nik collection completely free, which would have been good news for many photographers out there who could not afford to buy this collection and to many who were on the edge finding it hard to make a decision on the purchase.

But, was this a strategy from Google’s end to slowly pull off support for the software? Something that Google had already planned on implementation for 2017? Not sure, but it could be true that Google had plans.

By the looks of what’s happened with Nik collection, Google did not really do any major updates after the purchase, except one new release; the Analog Efex Pro in 2014, which was a free big update to existing users.

This kind of makes one feel that Google would not have bought Nik in thoughts of updating and selling the product, but must have purchased it just for some patents or copyrights or something else?

What is the big deal with Nik Collection?

While there is nothing that cannot be achieved without Nik collection of tools, the advantage in using Nik is that it lets the users achieve good results in less time. It doesn’t matter if you know how to use Photoshop or not and this is the benefit of Nik, as with many plugins out there.

How do the users feel?

Most of the users are pretty upset over the fact that Google has discontinued future updates for this software. While Nik collection may continue to work for a while without compatibility issues, once Microsoft and Apple release updates to their OS and Adobe releases updates to its products, Nik will struggle with compatibility issues… no doubt.

With more users buying this software, when the price was reduced and starting to get used to it eventually when Nik went free, it looks like Google has made more customers unhappy by giving them hopes. One is left thinking, “Was it in fact Google’s move to kill any competing software developers?”

With smartphone photography taking over the digital world, it looks like Google is focusing its interests on the smartphone app called Snapseed, letting the Nik Collection just die.

What about the future of Nik Collection? Is there hope?

Customers think they could save the Nik collection if it is made an open source program. But there are talks that Google would have purchased a lot of tech from Nik Software, part of which would have been used in updating / developing Snapseed. Therefore making the Nik collection open source, could potentially give the public access to making changes to Snapseed components. Also, we do not know if Google owns all the code or if there are other licensed modules involved.

Users who paid for this software in the first place, would have bought it with hopes that they would receive support for their investment as long as they use it.

Like with most problems that get escalated by certain organisations through signing petitions, it seems that photographers have shown their dissatisfaction through petitions and at the moment of writing this up, the petition for “Save the Nik Collection” via change.org has 12,311 supporters out of the 15,000 required. 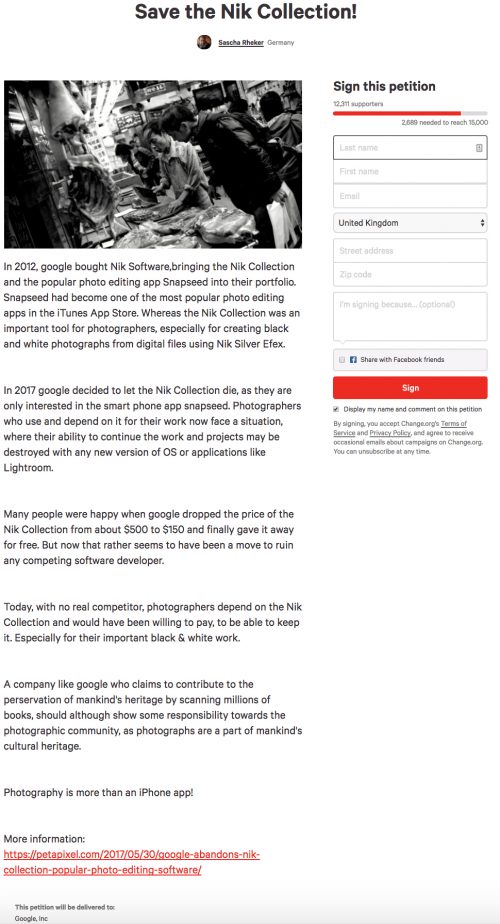 There is also another petition going around “Google must keep NIK collection for photography alive” in gopetition.com. So with Google being a company that usually responds to collective requests, may listen to the needs of its users and do something to keep Nik collection alive. 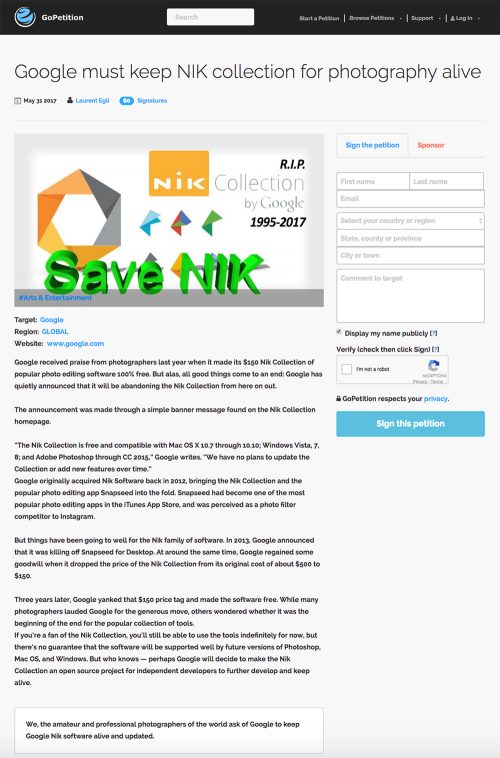 What are your thoughts on this entire situation? If you are / were a Nik user, how does this make you feel? Share your thoughts. Is there anything us photographers can do to keep this collection alive?

Thanks for sharing Dahlia. Signing the petition is worth a try.

NIK has been such a boost to my processing over the years and simplifies fairly advanced techniques for the masses.

Google should spend a little of its fortune on future compatibility updates.
Good PR Mr Google !

Thank you Elin. Yeah, we can do what we can. I’ve signed the petition too! 🙂

Absent from story is the Nik-Nikon connection which dissolved after Google’s acquisition of Nik, the result of which crippled Nikon’s once-great RAW developer, Capture NX, Capture NX-2. And what was great about Capture NX-2 was the seamless integration of Nik’s Silver Efex Pro and Color Efex Pro.

All of the above have drastically impacted my workflow. Thanks, Google.

I love Silver efex, but use other parts of the program too. I’ll sign in hopes it helps.

I LOVE the Color Effects Pro Contrast and White Neutralizer. Can never seem to get quite as good of a result for my landscapes just with Photoshop tools 🙁 Any tips on re-creating the Color Correct Contrast, Dynamic Contrast, etc of the Pro Contrast setting?