This post follows on from my earlier article on my stock shoot in London. My next destination was Belgium and, in particular, Ghent and Bruges. Although well covered by stock photography, I still felt that it would be possible to get some marketable images from these locations, especially from Ghent, my first destination. Getting there was simplicity itself, the 08.05 Eurostar to Brussels and a local fast train to Ghent itself. Total travel time from door to hotel door was 4 hours.

After dumping my bags in the hotel, I took advantage of the late summer sunshine and grabbed my cameras. I often do an unplanned walk around a new location when I arrive. It gives you time to find and shoot things that you had not seen in your research and gives you a feel for the place.

Although the light was quite harsh, the city was very photogenic and I spent a good three hours wandering and shooting, finding some good locations to return to. 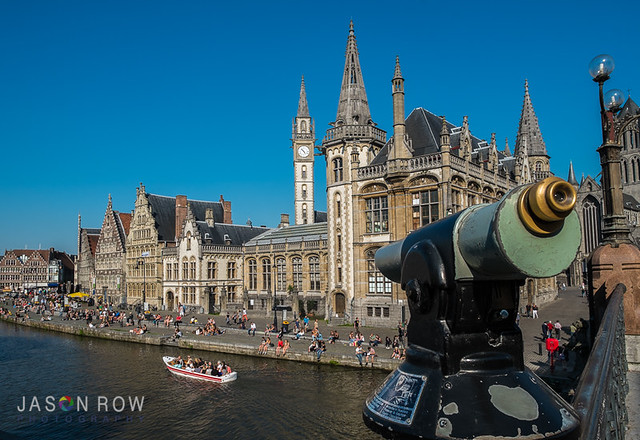 From my initial walk around the city

For my first evening shoot, I headed to Graslei, the canal region in front of the old medieval city. With me I had a Fuji X-Pro1 with 14mm and 60mm lenses and a Fuji X100s with a fixed 23mm lens. I also had a Manfrotto Carbon Fibre tripod and a set of Formatt-HiTech square filters. I arrived about one hour before sunset and spent the best part of two hours shooting, mainly from one location in order to concentrate on one particular scene. The golden hour did not yield much but as the blue hour kicked in, Graslei became a photographer's paradise. I shot with both Fujis, each image being bracketed from -2 to +2 stops using the exposure compensation dial. Aperture was set to f8 or 11. Unfortunately my mechanical shutter release cable failed but in order to maintain the maximum sharpness I set the self timers on the cameras to two second. Overall I was pleased with the images from the evening. 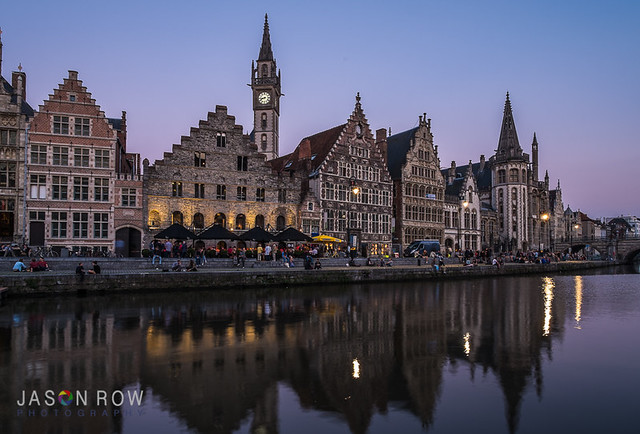 The following morning I headed to a bridge near the Graslei for a shot that I had worked out using Google Street View and The Photographer's Ephemeris. The weather continued to be favorable and I was able to shoot into the sun creating some moody backlit images of the city at dawn. 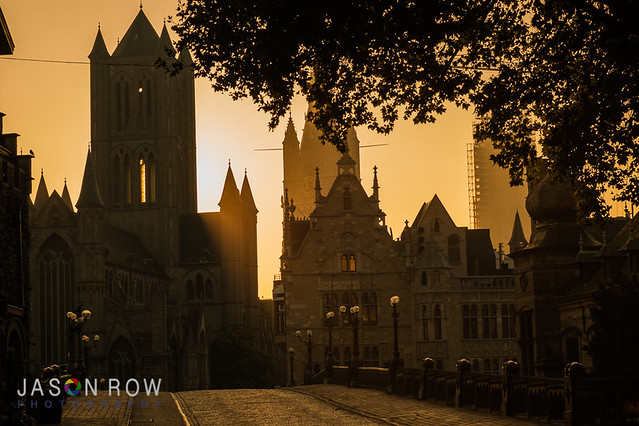 The following morning was gorgeous

That evening the clouds had taken over put I continued with another blue hour shoot of the Graslei area but with less success than the previous night. After finishing the shoot, I went for dinner but on returning to the hotel, I noticed how still the water had become in the canal. Cue a second round of shooting, this time at night proper. Shutter speed were down to around 30 seconds for these shots keeping the ISO at base level to minimize noise. 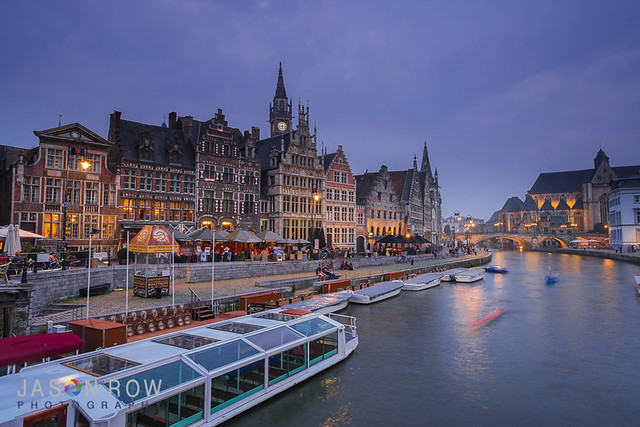 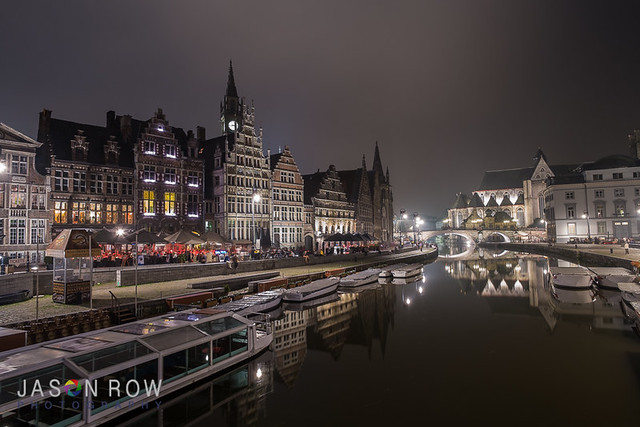 Followed by a beautiful still night

After two full days in Ghent, I moved onto my second location Bruges. Again arriving early afternoon, I dumped my bag at the hotel and hit the streets of the city. My initial impressions were very bad. It was a Saturday afternoon and the city was heaving with tourists. Every second shop was selling Belgium chocolate and the grey skies did nothing to lighten my mood. With a couple of hours to go until the sun began to set, I had a late lunch and tried out some Belgium beer.

I was pleasantly surprised to find the streets much quieter when I left the bar, and headed to one of the iconic locations in the city for my evening shoot. With an hour to sunset, I staked my claim to the ideal spot by setting up my tripod and just shot various images from that location. The blue hour proved to be very fruitful, the famous Belfry tower being well lit against the deep blue evening sky. My favorite shot of the evening was when some swans paddled the canal in front of the Belfry.

Although shutter speeds were two low to freeze them, they add a nice interest to the foreground. Again through out the evening shoot I set the aperture to f8 or f11 to keep a decent depth of field. 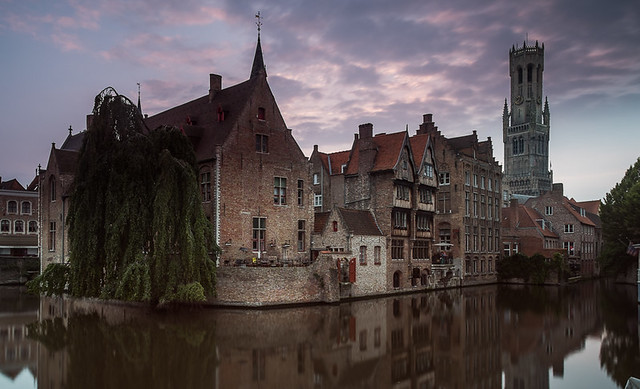 Early twilight was not great 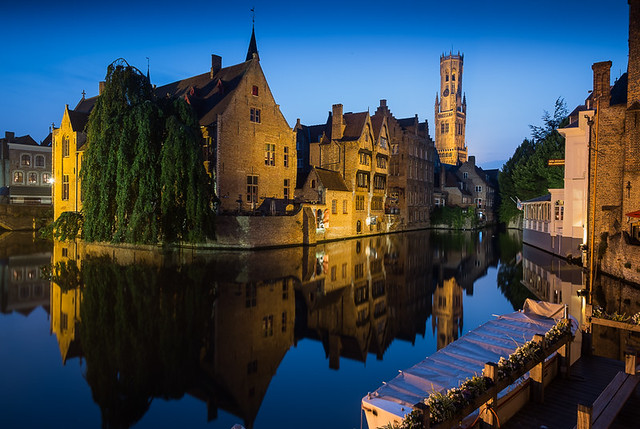 But the Blue Hour yielded results

The Sunday was pretty much a wash out weather wise. However, on the Monday morning, the clouds cleared and the day was set to be perfect for shooting. Rather than doing a planned shoot in a specific location, I took advantage of the blue skies and just holistically wandered the city shooting whatever came into sight. Its an approach that worked well but did get me entirely lost. 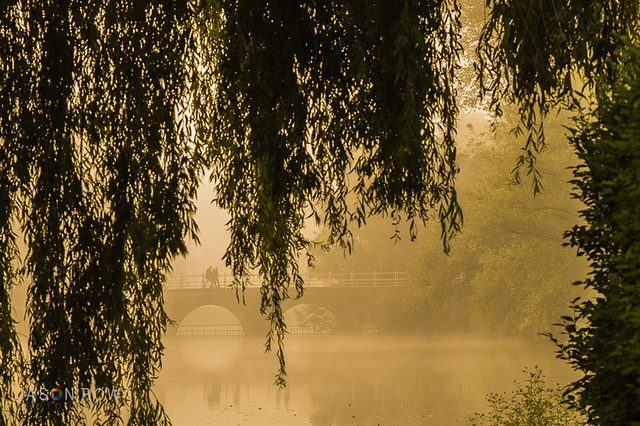 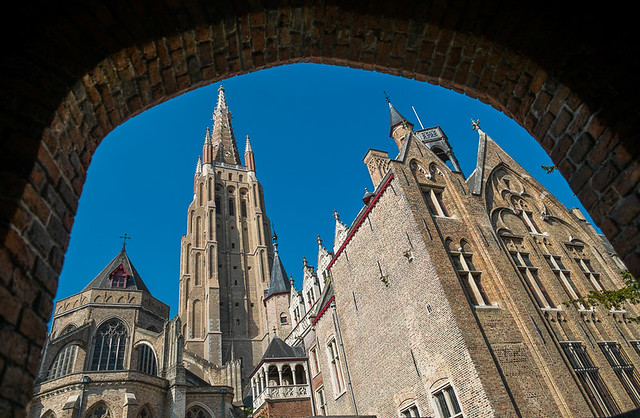 Clear blues skies on my last day in Bruges

So in conclusion, time will tell whether these shoots in Ghent and Bruges were commercially viable. However, as a testing ground for my new travel photographic kit, they were perfect. Lots of walking, multiple lenses required, and lots of low light photography. The Fuji cameras behaved impeccable throughout this time. Their light weight giving me the stamina to push much further than if I had been carrying pro DSLRs and lenses. The image quality, particularly in low light is astounding, and one of the things that I really think helps contribute to this is the lack of mirror slap. This is a significant factor in DSLRs even when mounted on good tripods, on the Fuji cameras and, of course, other mirrorless systems, it does not exist. The sharpness of the prime lenses that I used also astounded me, far better than I was expecting and on a par with, if not better than the Nikon Pro zooms that I had recently sold.

Thanks for sharing. Those shots really captured what Belgium is about.

Thanks Tim, I was wonderfully surprised by Belgium, so much so I have just made another trip, to Antwerp. Lovely country, friendly people, photogenic cities.