Stop for a moment and think about the last time you laughed so hard, tears were rolling down your cheeks. Laughter is a gift that we all cherish. Humor is as mysterious as the Heavens. Why? Because it's uniquely tailored to each and every one of us. So… The questions stands, “Do you think you're funny”?

Do you have what it takes to create humorous photographs?

Or, perhaps you just want to give it a try: something like open-mic night at the local comedy club.

Let's answer some questions about what humor is, how it works, and in what ways those principles could be applied to still photographs.

Some images are universally funny and others are most likely only going to be funny to family and friends – those that know you. This image relates more to the latter group.

hu·mor
ˈ(h)yo͞omər/Submit
noun
1.
the quality of being amusing or comic, esp. as expressed in literature or speech.
“his tales are full of humor”
synonyms: comedy, comical aspect, funny side, fun, amusement, funniness, hilarity, jocularity; absurdity, ludicrousness, drollness; satire, irony, farce
“the humor of the film” – Courtesy of Google

“Whatta you mean I'm funny?… Funny how, am I a clown, do I amuse you?” – Actor Joe Pesci, in his role as, Tommy DeVito, in the critically acclaimed film, Goodfellas

What is the purpose of humor? Why do we laugh?

“Humor is a complex phenomenon There is no general theory of humor or even an agreed definition.
When we try to define exactly what counts as humor and what does not, or how humor operates, we find it quite difficult. Humor is comprised of three components: wit, mirth, and laughter.
Wit is the cognitive experience, Mirth the emotional experience, Laughter the physiological experience.”
– Courtesy of Dr. Chaya Ostrower (This quote comes from a very interesting article about humor. If you like to learn stuff, we recommend it.)

From a photographic standpoint there are two avenues in which to pursue humor in your work.

1. You possess wit and a keen eye. You spot things in the world around you that you perceive as funny, and you believe others will as well.

The danger with any type of humorous expression is that we all have different sensibilities about what is funny. While many might find the “odd juxtaposition” of a nun playing cards on a computer funny, others might find it offensive.

“Every generation has someone who steps outside the norm and offers a voice for the unspeakable attitudes of that time. I represent everything that's supposed to be wrong, everything that's forbidden.”
– Sam Kinison (who was the king of raunch comedy in his era)

The above image seems to have that “incongruous situation element” that most folks would find funny in a photograph. But you never know, someone from an animal rights community may not see the humor. If you decide to present humor in your photographs be ready to take some arrows from those who don't agree with you.

2. You possess wit, and you like to create things. This photographic process starts in your head. You dream up something that you believe would be funny, and you go about creating it. This is probably the safer process when attempting humorous photographs; you control what the humorous elements are. 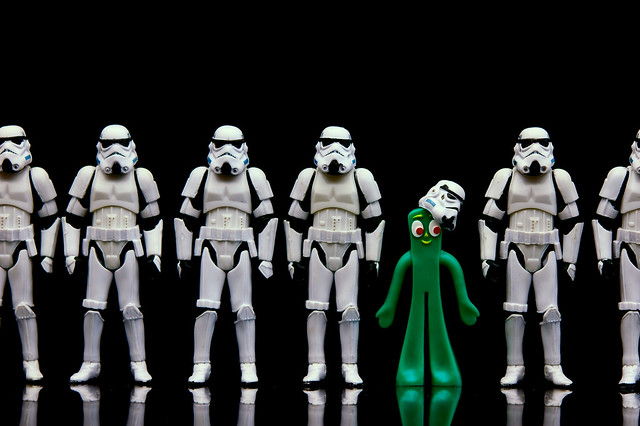 This photographer took two universally known iconic symbols and created humor by placing them together in an unlikely situation.

“I don't know the key to success, but the key to failure is trying to please everybody.”
– Bill Cosby (probably one of America's most revered comedians)

Humor is often delivered using a format that touches all our senses: sight, sound, smell, taste, touch. But, we don't have that luxury in photography. We are relying specifically on “sight”. This makes the job of being funny that much more difficult.

After reviewing hundreds of images on Flickr, that were tagged “funny”, we've come up with a list of the most common type of photographs that are attempting to convey humor. 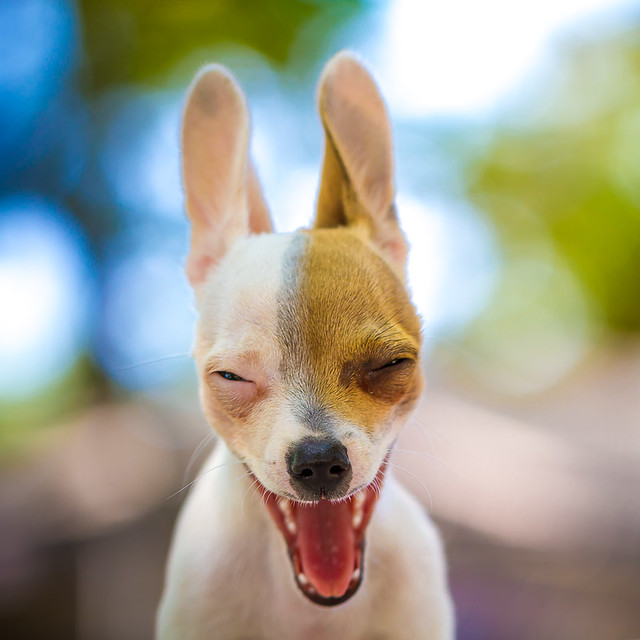 Let's face it, most of us find animals expressing themselves as funny. The key to a successful image – Keep your camera handy, ready, and develop your sense of timing because they aren't going to hold their pose for you. 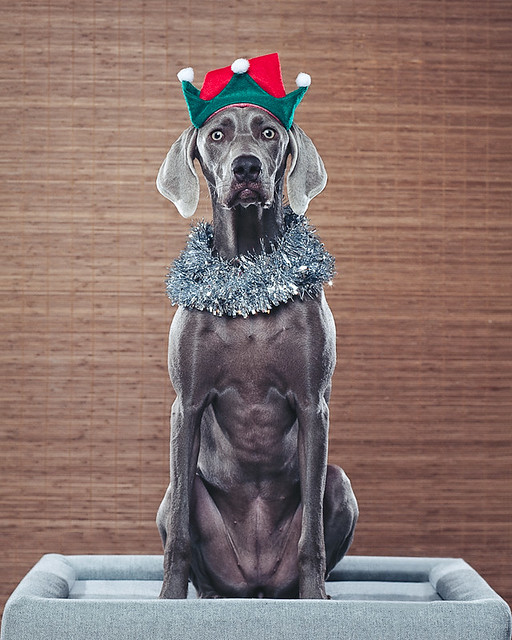 As humans, we have a universal interest in animals. They are an everyday part of our lives, and while we would like to believe that truly know them, there is a mystery behind an animals eyes that we will never understand. Dressing animals up in costumes will appeal to some, others will find it ridiculous, and another group will hate it. 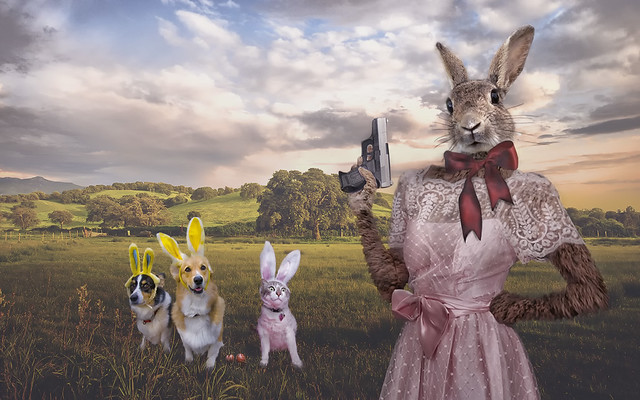 When embarking on the traditional Easter Egg Hunt don't forget to wear appropriate camouflage gear or the rabbit might get you. by David Blackwell., on Flickr

This attempt at humor often relies on “shock value”. Animal faces, heads, body parts are placed into scenarios that are simply impossible, and that is why they might tickle some funny bones. They are ludicrous beyond belief. 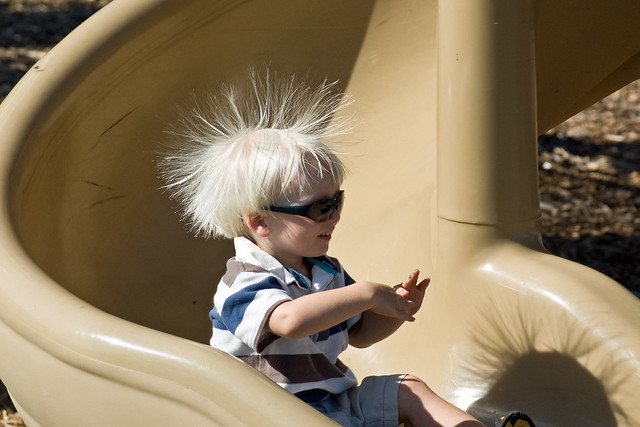 Whomever came up with the expression, “Children do the darnedest things”, knew what they were talking about – because they do. Your challenge as a photographer is to be ready when a child presents a funny moment!

This form of photographic humor often entails the use of exotic lenses, unusual angles, and specialized techniques such as HDR or high contrast. 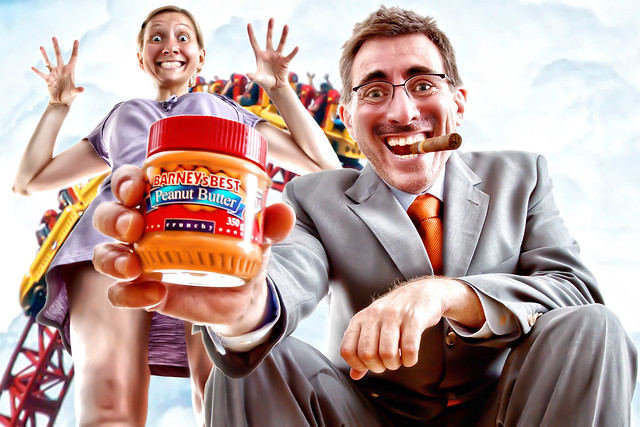 Family Portrait with Peanut Butter and Roller Coaster by David Blackwell., on Flickr 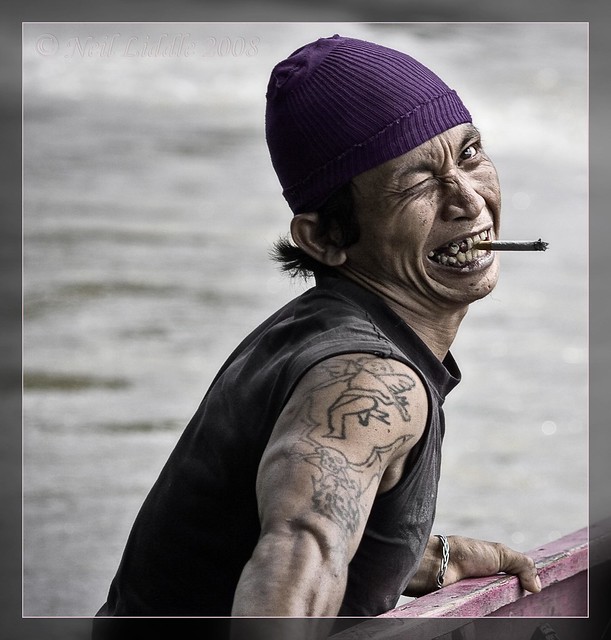 It can also mean capturing the expression of someone outside our own world, our comfort zone. One of Dr. Chaya's theories of humor is superiority. We might look at someone, such as the man pictured above, and find humor in the fact that although it appears that he has never seen a dentist, but, he's still a happy man.

6. Discovering an odd juxtaposition, or incongruous, group of elements

This photograph is most likely “hilarious” to fans of the movie, Twilight. The expression on Jacob Black's face, the knowledge of his character within the movie, and the absurd location of this dilapidated trailer: make for a humorous situation. Then again, if you never saw Twilight, it would mean nothing to you. A goal when creating humorous photographs is to try and target as large an audience as possible. Hit upon universal elements. 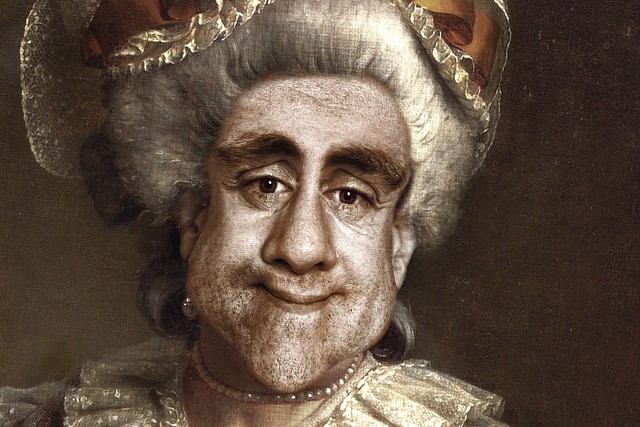 This is a very interesting humorous photograph. Despite the fact that the photographer gave some very specific details about what this photograph depicts- It doesn't matter. The man's expression, and unusually shaped head, make it universally appealing. You may not split a gut over this, but, you can't help but chuckle. And, isn't it interesting that the painting, (from which this photograph was taken), was created in the year 1586 A.D. It looks like a modern day Photoshop job… Don't you think?

7. Creating photographs that defy the expected 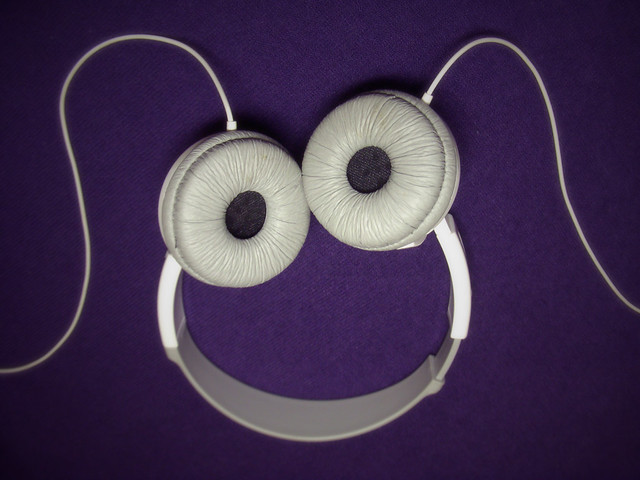 Of all the photographs we researched for this article, this is our favorite. This image portrays an excellent use of wit, photographic skill, and universally appealing subject matter. 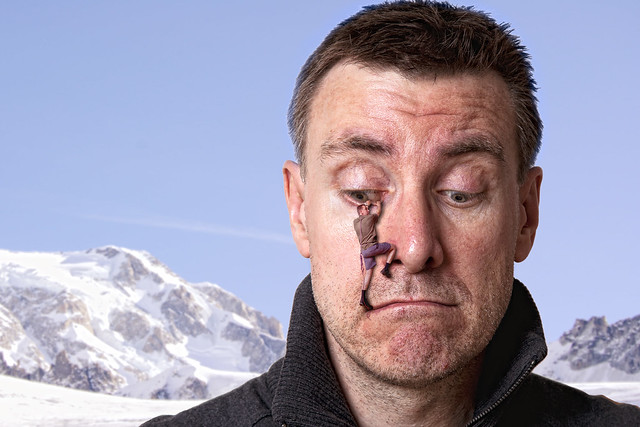 This photographer took a personal situation and used it to create a photo-manipulation that defies logic. This is an interesting image to dissect. We imagine that it's really funny to those that know the photographer, know the area, and know the situation. To those outside of that world… it's interesting… but does it go beyond that? It did catch our attention. But, we originally thought that the photograph depicted a UPS Delivery Driver making the climb… an interpretation of a well-known company going to extremes to make the delivery.

It was only after further examination that we got the point being made here. Does that mean it's working, or, it isn't? It stopped our search, held our attention, delivered the wrong message, but still held our attention till we figured out the right message. Is it funny? Kind of…

What do you think?

Here is your challenge readers. Can you come up with some ideas for funny photographs that are a new twist on these old themes? Or, something completely new?

We would love to see some of your humorous photographs here at Lightstalking!

I love humor in photos. This is one of our models during a shoot for a clothing boutique. She has a great sense of humor.

Your link is broken.

Here are a couple of mine. Both have an aspect of the surreal, and also a bit of horror, and both are self-portraits.

I would love to see them. Your links are broken.