We're Looking at Twitter for Photographers – How Your Business can Benefit

You can be the greatest photographer in your field of expertise, but if nobody knows that you are a great photographer, you won’t earn a dime.

I don't like to be quite so blunt, but there's a huge element of truth in this.

To solve that problem you need to market yourself and your photography business (which are basically the same thing).

Social media is a perfect place to start, first of all, because you can start small, with whatever the social media sites offer for free, and then scale up when necessary.

In this article the focus falls on Twitter, and how to get started with it.

So, Twitter is a completely asymmetrical network, unlike Facebook which is both, depending on the way you use it. On symmetrical networks, you and your audience share a connection, meaning that whatever they post you can see, and whatever you post they will see (eventually).

On asymmetric networks, you only see the content from the people you follow, and your content is seen by the people following you, so it is not always mutual.

The good thing about asymmetrical networks is that there is no limit on how many people can follow you, and vice versa (unlike the 5000 friends limit on Facebook), the bad thing however, is that it is a bit hard to gather followers in the beginning due to the fact that nobody knows who you are.

If you haven’t used Twitter before, you’ll need some time to get used to its 140 character limit – especially tricky when you need to post a link, of course, this is where companies like bit.ly come into play.

Bottom line is, you have to phrase everything carefully in order to squeeze everything within Twitter's character margin. There's an art to it, but once you get to grips with it, it becomes pretty natural.

How to Get Started?

First of all, you must understand that Twitter functions somewhat as a community. Since it is asymmetrical, you can follow people but it doesn’t mean that they will follow you back, and vice versa. This means that people tailor their following towards what they want to read/interact with, and you would too.

You should start off by following something around 100-150 people. But not just anybody, follow people, companies, blogs and everything that you have great interest in – as a photographer mine would be

You get the idea here. Ok, this will serve you in two ways: 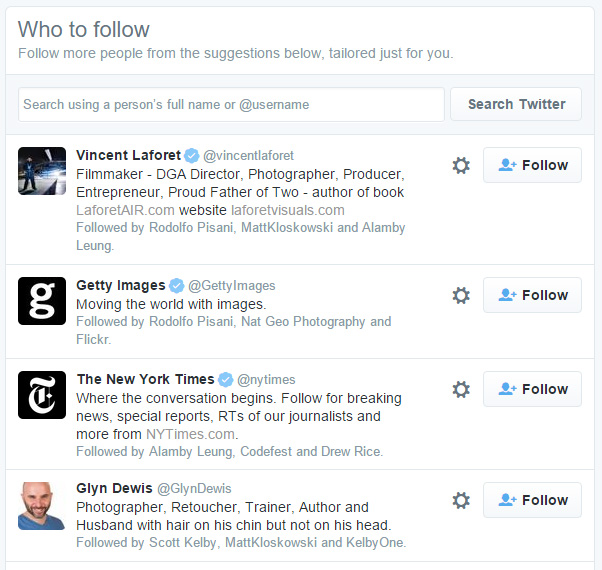 Next up, you’ll need to gain your first followers. This will happen naturally by people who will hopefully follow you back, but you can also stimulate this by striking conversations, favoriting posts, retweeting, and mentioning people in your tweets – aka ENGAGEMENT.

Of course, try your best to do this naturally, don’t be pushy and don’t mention people just for the sake of mentioning.

For example, you just got back from a shoot and edited some of the portraits. Great, attach one of the portraits (a decent enough sized crop, no need for full resolution) and ask for feedback.

However the model you shot also has a Twitter account (highly likely), so tag them too. Something along the lines of:

“Just got back from a shoot with @model and here is one of my favorite pictures. What do you guys think?”

…will be just fine.

Another example could be when you just got a new lens from Sigma, and shot some great landscapes with it. Post a picture (or a link from a photo sharing website which will produce the picture in the post anyhow) and mention Sigma and maybe hashtag #landscape, something like this:

“Went out to the mountain to test out the new @Sigma lens, and ended up with this magnificent #landscape: link here”

Posting your content on Twitter is cool, but as a part of a community you need to support others as well.

Therefore, if you see something you like, retweeting or “fave-ing” won’t do you any harm, quite the opposite – replying would be even better for their exposure and develop your following/audience.

If you see some good work that another photographer you know/follow did, retweet some of his work and show appreciation, it will go a long way. It works just as in real life, sharing is caring.

Twitter is more personal than Facebook. Here people want to see you and your personality – the one behind the camera, not just the end results. So don’t be afraid to let the personal life spill in between the business/art. In fact, do it anyway since it will yield better results – people want to see that you're human!

Being more personal means that the Twitter community can relate to you better, thus having more reasons to follow you, suggest you, or even hire you. Everything you do on Twitter matters (because it's more personal), so exercise a little caution and just be yourself.

As with any other social media platform, Twitter requires presence. Possibly more presence than other social media networks due to the users being accustomed to being able to tweet just about anything from their smartphones – it's got a more instantaneous feel.

However, that doesn’t mean that you should tweet just for the sake of it, quality is always better than quantity. Just make sure that you don’t lose your presence or you will lose your momentum. If this happens, you can always pick it up again, follow some new accounts remove some old ones and create a more “refreshed” feel to your feed.

The Twitter community is largely most active just on Twitter as opposed to Facebook, and if they do use Facebook, it's likely much less often. Most people also get accustomed to one or two social media networks (usually one of each kind) and stick to it.

When you're using Twitter, more than half of the audience you have there is pretty new, meaning that you don’t have those people following you on any other social media network. That's a huge bonus.

Everything is direct and simple, the moment you post something it shows up on the homepage on every online follower, and basically to each other follower that will log in some time later and scrolls back on their homepage.

This means that the reach is quite large on Twitter when compared to Facebook if we're looking at an equal amount of followers. That reach, of course, rises with every favorite and especially with re-tweets (which basically shows up on the homepage on every user that follows the user that retweeted your tweet, which is quite neat).

Of course, when you tag/mention somebody, the tweet shows up on their timeline too (when you're mutual followers), meaning some more organic reach for your post.

#Hashtags – An Excellent tool for Engagement

Hashtags give you exposure to non-followers and followers alike, helping you reach a wider audience. Just make sure that you are using trending hashtags (a little research here wouldn't go amiss) and you don’t use more than one or two, and not in every tweet – avoid looking spammy.

Be subtle and smart.

There are Some Disadvantages Though

The limit of 140 characters, which becomes less if you attach a photo or post a link, can be quite a struggle at times. Since we photographers are storytellers, it is a tad difficult to tell a story with something around 120 characters. This often puts you in the position of thinking how to explain/express everything in one sentence.

Also, getting started and growing an audience on Twitter is perhaps a little harder than other social media networks due to some communities being harder to reach and “infiltrate”. The good thing is that once you get going it is quite a lot easier than other networks, so it evens out in the end.

You might be hating your smartphone from time to time since Twitter will cost you quite a bit of time daily. Not that it is hard or stressful, but since you’ll need to tweet/retweet and be present quite a lot, you’ll be hugging your smartphone more than usual, until it becomes a habit and you stop noticing you are actually doing it.

My solution? As a photographer, have a couple of “slots” in the day to tweet, RT and generally engage. This will be useful once you're more establish and used to the platform, because otherwise your time will just get eaten, which in turn becomes pretty unproductive!

Twitter is an asymmetrical, community-based social network. To conquer it, you need to be part of the community, be present, and be thoughtful.

You shouldn’t be annoying, you shouldn't spam, and you should always give back to that community. It will be a slow start, but with time the result will be visible.

Just make sure you go with the flow. Follow people that are well known in the Twitter community and see what they do, try to emulate that and learn from what works and what doesn't work. Altogether, it's fun learning these things

If you’re getting started with Twitter and social media as a photograher, and need some extra tuition on post processing, look no further.
Photzy has the perfect video-guides on producing share-worthy pieces of work – “Understanding Post Processing”.