Love it or hate, for those of us inhabiting the northern climes, winter is fast approaching. Some of us will pack away our cameras over the long winter months and concentrate on catching up with the editing but some of us will brave the elements and embrace the snow and ice. Photographing snow has, and still is a difficult task. Even the very best cameras will struggle with exposure and focusing. In this article we will look at some hints and tips to get great winter shots.

Cold weather is going to sap your battery power dramatically. Make sure you have spares and keep those spares in a trouser pocket to keep them warm. When you replace the battery put the old one in another trouser pocket, this may well breathe some more life into it. Don’t forget to wrap up warm yourself. Whilst gloves can be cumbersome are very important. Many people trim the fingertips off gloves to make it easier to shoot with them on. 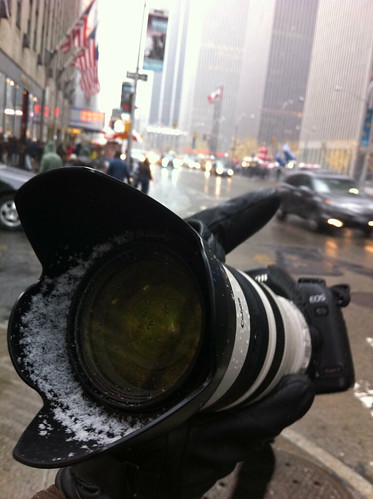 As great as modern cameras are, many still get fooled by snow. The abundance of white confuses the meter into under-exposing the image, leading to the flat grey look often seen is snow shots.

The quick and dirty way to reduce this problem is to set your exposure compensation to +1 to 1.5 of a stop. This will lighten the image making the snow much whiter. Be aware of over exposing too far, learn to use the histogram and make sure the right side of your exposure, the highlight end, is within the right side of the graph. If it’s not bring the exposure back a little using 1/3 of a stop at a time.

Also watch your white balance, the way light reflects of snow can throw the whites off color. If possible set a manual white balance, better still shooting RAW will allow you to correct in post production. 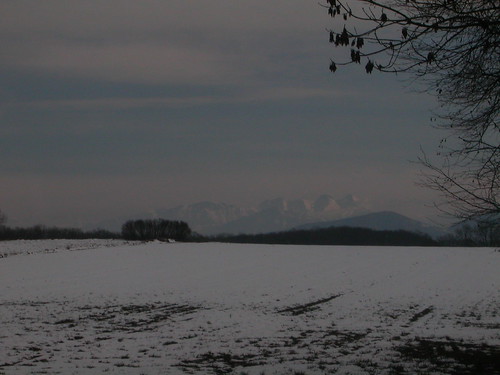 Underexposure is a common problem with snow by lorentey, on Flickr

Snow can play havoc with a camera’s focussing system. Modern autofocus, looks for contrasts and obviously a large area of snow does not have that. If you are not getting a good lock, switch over to manual and focus yourself. You will, in the long run, save a lot of time and energy.

Considering What to Shoot

The world is your oyster when shooting snow. Even your home town will be utterly transformed by a good fall of snow. Landscapes that in summer would be less than inspiring take on a new photogenic beauty in the snow.

Look for contrasts, a bright, deep blue sky over a sea of white, a single dying leaf (its orange color will be striking against the pure white). The deep green of pine trees in a snowy landscape can be great. 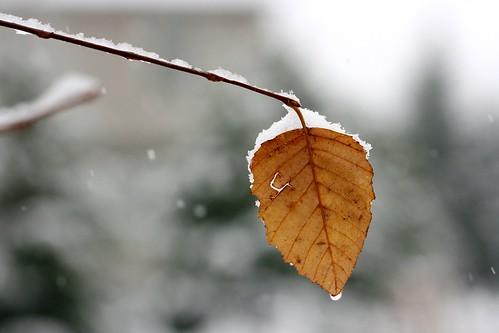 Use color to contrast the white by photochem_PA, on Flickr

On sunny days silhouettes can produce stunning images. The low winter sun behind a bare tree can cast beautiful shadows on the snow. Even the uneven snow itself can make for great looking texture when shot against the sun. Here shooting RAW will really come into its own, balancing the golden light of sunset against the white of the snow can be extremely difficult for the cameras own metering. 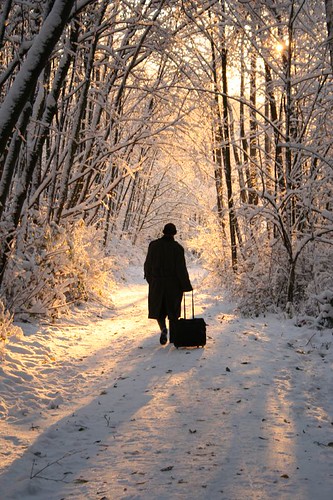 A nice example of a snow silhouette by ::Ricardo Quintero::, on Flickr

Don’t be afraid of shooting on overcast days. Train your thoughts to black and white in these cases, dark moody skies on bleak landscapes can make highly evocative images. In cities, snow covered street furniture such as streetlights can make great shots. Outdoor portraiture can also be ideal in overcast snow conditions. The omnidirectional light giving a soft flatter look to a person. The use of colourful hats, scarfs and coats can add that contrast to the image. If needed use a little fill in flash, just to add a touch of sparkle to the eyes and definition to the face. 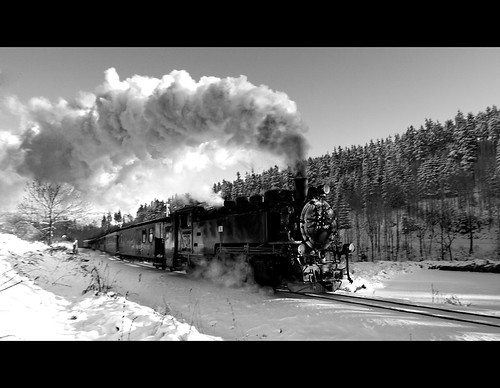 Monochrome works well in snow by Meyer Felix, on Flickr

Shooting night shots in the snow is also highly rewarding, especially cityscapes. You will need to monitor both your exposure and white balance very carefully, the multiple light sources, typical for city scenes, reflect off the snow in different ways and can produce unpredictable color. Again watching the histogram and shooting RAW can help alleviate many of these issues.

Winter can be a surprisingly wonderful time of year for photography, a covering of snow can transform normally mundane surroundings into something special. And for that very reason you should be out there in the cold to capture it.

Good ideas. Only problem is the specs for my t2i say it is for 32 degrees F. and up. Since warranty is no longer an issue, how low can I reasonably go with a camera like this? Lenses are kit plus an EF 50mm 1.8.

I took my old rebel XTout in well below 32F, more like -40C at times and besides the battery draining faster I had no major issues. Just remember to let it warm up when you get in before banging it around, I usually popped my card out and left it in the bag with the cover closed, but not sealed. As long as you do not drop or try to beat a bear to death with it in cold it should be ok.

Just go out and shoot. Ignore the 32F warning. Unless it gets wet, the worse that the camera is going to deal with is a dead battery. Although, at 32F it’s not going to really be a noticeable problem. Keep the camera dry and have fun. I’ve shot in temps down around 0F and have been fine. Especially if I keep the battery warm between shots. Again, keep it dry and have fun.

It’s well known to place your camera in a sealed ziplock baggie and let it warm up to room temperature, after bringing it in from the cold. That takes care of condensation on the inside of your camera. It usually takes about 30-45 minutes. I’ve always done this and I’ve never had problems.

I take out the SD card first.