If you’re in the market to finally make the jump from your point-and-shoot to the added functionality of a dSLR, the first thing you want to do is decide which entry-level camera is right for you. In this article, we’ve taken the most popular models and compared them side-by-side so that you can make the best choice for your photographic needs. 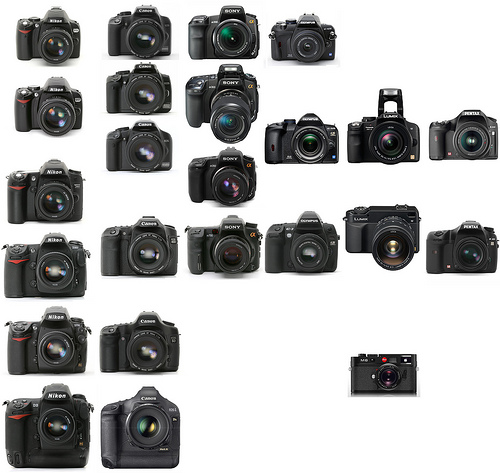 New to the Rebel line, the Canon T2i is the perfect introductory dSLR that is designed for many years of use without becoming quickly outdated. It’s feature-packed for the versatile photographer, with live preview and video capabilities. Essentially, the T2i has taken all the features of the popular Canon 7D and packed them into a smaller body. While it retains some of the most important features of the 7D, it does have a few drawbacks that make it a not-so-optimal choice for professionals – such as a more flimsy body which make it feel like a toy when compared to the larger models. Still, it’s a perfect balance between functionality and price for those who are just starting out.

The next step up the Canon dSLR line is the 50D, which is where you cross the threshold from “high-end intro level” of the T2i to “low-end professional”. The biggest difference you’ll see with this camera is added functionality and better build – a slightly larger body and added weight makes it feel more like a professional camera than the lightweight body of the T2i as previously mentioned.

The pros of the 50D is a much faster frame rate (6.3 fps vs. the 3.7fps of the T2i) and more accurate focusing, which is great for wide apertures and low-light conditions. However, since the 50D is an older model, there are no video capabilities which may be a big drawback to those who want to capture video while out on a photo shoot.

Also, the T2i performs better than the 50D when it comes to light metering since the technology is newer and more accurate – the same kind found in the well-performing 7D. One has to question if the higher price tag of the 50D (almost $200 more for the body as I write this) is worth the extra money for a camera that also lacks video capabilities. If you plan on shooting sports or other subjects that require a faster frame rate, then the 50D might be for you – if not, I would consider the T2i.

On the other end of the spectrum we have the Nikon line of intro-level dSLRs:

Much like with the Canon line, the high-end intro level dSLR (D5000) is newer than the low-end professional D90. However, the D5000 seems to have more drawbacks when compared to the D90, which can make your decision a bit more difficult.

First of all, the D5000 has no top LCD display which can be very annoying, especially if you’ve trained yourself to quickly check your settings this way. Not only does the D90 have a top LCD screen, but the rear LCD screen is a bit larger (3.0” vs. 2.7”) – and the resolution is much better on the D90.

However, one benefit of the D5000 since it’s a newer model is a larger buffer for image recording – this means it will allow you to shoot 11 RAW files and 63JPG images continuously instead of only7 RAW or 25JPG files on the D90. There are some other minor benefits and drawbacks of the D5000, but none really worth mentioning (for example, the D5000 has a “quiet release mode” to help silence the shutter while the D90 does not).

It seems to me that the intro-level Nikon models have a bigger disparity between each other than the Canon line, which makes it a harder choice when deciding if the extra money is worth upgrading to the D90.

The new line of Sony dSLRs is really exciting – actually, with the changing technology, they’re not really SLRs anymore but rather SLTs. In short, this line of intro-level cameras have what is called “translucent mirror technology”, which basically means that the internal mirror never moves, allowing the camera to focus and shoot simultaneously. For you, this means that you can shoot at a much faster frame rate when compared to traditional dSLRs in the Canon or Nikon line. Sports and other action photographers will love this benefit.

There is a common misconception that image quality in the Sony line fairs poorly when compared to the industry standards of Nikon and Canon. I’ve done quite a lot of research on the subject and, if you want to get real technical to the point individual pixel performance, Sony is slightly outperformed by both Nikon and Canon. However, it’s not noticeable to the average photo enthusiast so this shouldn’t be factor into your decision. Image quality is much more dependent on your glass, which brings me to my next point.

What you should consider very carefully with Sony cameras is the lack of lens options and also the higher price tag that Sony has on its line. When compared to Canon and Nikon, Sony has a far less number of lenses, which can really limit the kind of images you can capture. Also, when comparing similar lenses, the Sony line tends to be much more pricey. For example, the Sony 300mm f/2.8 prime runs about $6,300 new, while the Canon 300mm f/2.8 is only $4,400 new. This trend seems to be constant for most Sony lenses. If you want your Sony camera to have the same versatility of a Canon or a Nikon, you’ll have to switch to third-party manufacturers.

Lastly, the best buying advice you can get when choosing your intro-level dSLR camera is to invest in lenses rather than the body. For example, if your budget is $1000 and you can either purchase a dSLR + kit lens for $999 or spend $500 on the body and another $500 on some quality glass, choose the better quality lens and the less functional body. Unless you typically abuse your lens, it will far outlast any body that you purchase. Also, as mentioned before, image quality is MUCH more dependent on the kind of lens you have than the camera it’s attached to, which should be your primary concern.

With that being said, also try to avoid purchasing a kit lens with your new camera. B&H Photo Video and a few other online retailers do a decent job of pairing high-quality lenses with your new digital SLR, but if the manufacture chose the lens (hence the term “kit” lens), then you’re usually in trouble. It’s much better to spend a little bit more on purchasing your camera and lens separately as you’ll find much improvement in image quality. Reading user reviews on kit lenses is also quite helpful. A simple Google search for your lens name plus the word “review” or “performance” will bring up countless independent articles that explore image quality.

I'm a professional landscape photographer living on the coast of Maine. Through my work, I like to show a vantage point that is rarely seen in reality; a show of beauty, emotion, and serenity. Feel free to visit my website.

I must agree with you on the Canon comparison’s above. That is all I can comment on as I only use canon equipment. I bought my wife the canon intros and they are GREAT for the beginner.

Canon will soon be releasing the 60D, if they haven’t already. Street price for it should be under a grand, and if specs and features are as advertised, it should be well worth a few hundred dollars over the T2i and the 50D.

I appreciate also your comments about the kit lens. A kit lens on a high quality body looks like it was taken with a kit lens. However, you can get some nice images with an L-series lens on a Rebel.

Since I’ve bought a 50mm and a couple of L-series lenses, my kit lens remains in a dark corner of my camera bag. I may even trade it in to get some accessories at some point soon.

I want to upgrade from my Canon compact to a DSLR.. Between Canon T2i and Nikon D5000, which is better?

Id get the Nikon d90. Its price is even cheaper than the T2i and it will probably be getting more affordable still given the recent anouncement of the replacement d7000.

Agreed that a quality lens far outweighs the benefits of a quality body. I am still using a ‘old’ Nikon D70, but with a quality prime lens (such as the Nikkor 50mm or 85mm), the sharpness and quality of the images is outstanding.