“Art is not what you see, but what you make others see.” —Edgar Degas

What makes a great photograph? Is there any one aspect of the process which separates the merely good from the truly magnificent? Many candidates immediately spring to mind, such as subject matter, light, mood, and moment. In my opinion, however, one aspect clearly rises above the rest, and is the thread which ties all of these other qualities together. Composition—the artistic arrangement and placement of visual elements within the picture frame—is the most difficult aspect of the art of photography to master, and also the most important. Although the importance of the emotion evoked by a photograph’s subject matter and mood cannot be underestimated, likewise the primal visual response evoked by a skillful composition cannot be ignored or forgotten.

In my new ebook Visual Flow: Mastering the Art of Composition, I discuss a number of compositional tools and techniques which have been used by the masters of painting and photography for centuries. I’d like to share of few of these secrets with you today, as I present ten examples of my own nature compositions.

For this image of the famous Horns of Paine at sunrise, I was attracted to the repeating shapes formed by the curve of the waterfall in the foreground and the arcing clouds in the sky above. Foregrounds are really important to nature photography compositions, so you should make some effort to pick one which complements other areas of your scene. 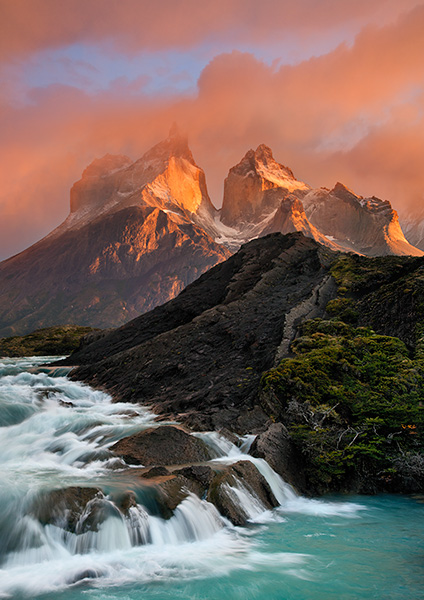 Here, I was attracted to the radial pattern of lines formed by the dead tree and its shadow. Radiating diagonal lines can be very effective at commanding the viewer's eye. They also focus attention on the place where the lines converge, so make sure it is an area of importance within the composition. 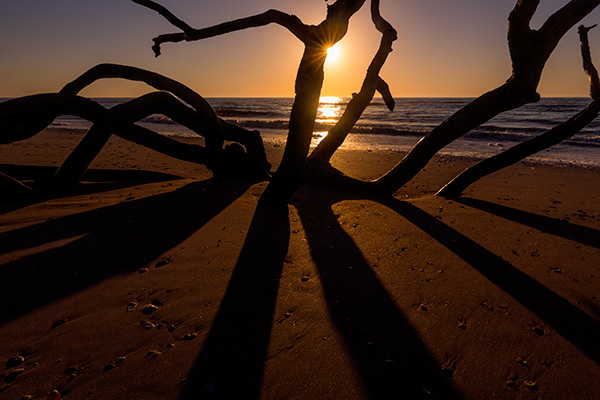 I kayaked for twenty miles, swam through a flooded slot canyon, and was accosted by an angry beaver just so I could make this photo. I used the reflection of the sky as a leading element to encourage the viewer to travel deeper into the scene. Also, the slight curving shape of the reflection mimics the curving shapes found elsewhere in the canyon, creating a pattern of sorts. People are naturally attracted to repeating shapes; you can use this to your advantage when composing a photograph. 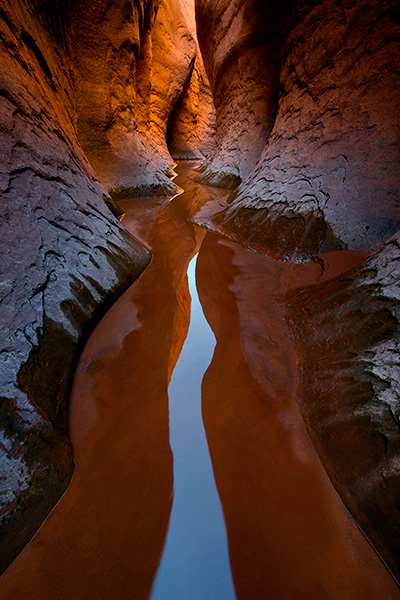 I had been waiting for the moment when the sea turtle surfaced for air, but what set this image apart from others I took that day was the triangle shape formed by the turtle's pose and position. Graphic shapes such as triangles and circles can help simplify a composition, and create bold photographs that get noticed. 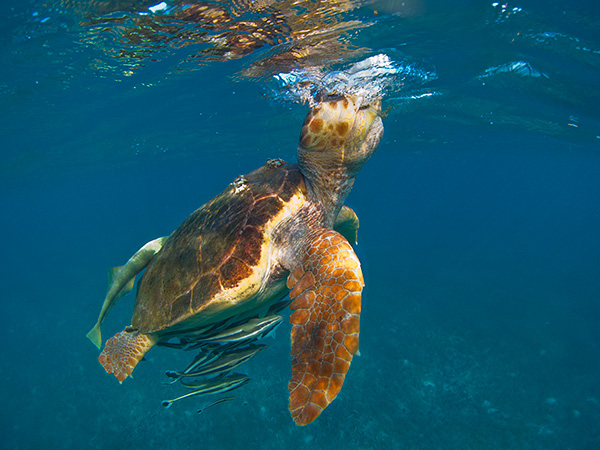 This was one of the most visually chaotic places I have ever photographed. To simplify the composition, I relied on the foreground ferns to act as a “visual anchor,” using their eye-catching shape to attract the viewer's eye and give them a logical starting point for their visual journey. The radiating lines formed by the mossy branches help focus attention within the image frame. 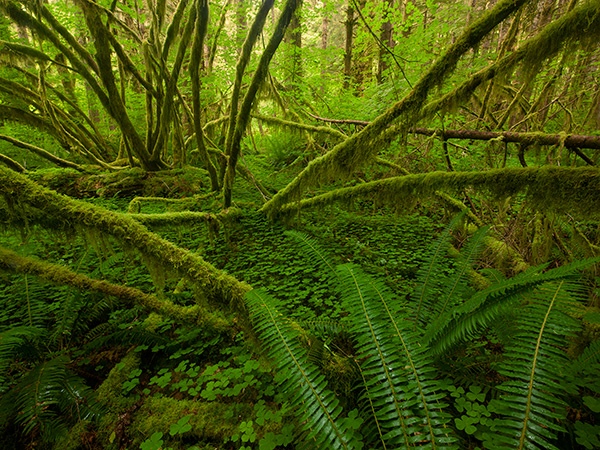 What makes this shot special for me is more than merely the pose and the outstretched wings of the owl. The implied line created by the owl's line of sight repeats the line formed by the cloud in the background. The cloud also helps to encourage the viewer to travel from left to right within the composition, whereas the owl's line of sight pushes the eye back to the left. This creates a visual tug-of-war which keeps the viewer's attention locked within the composition. 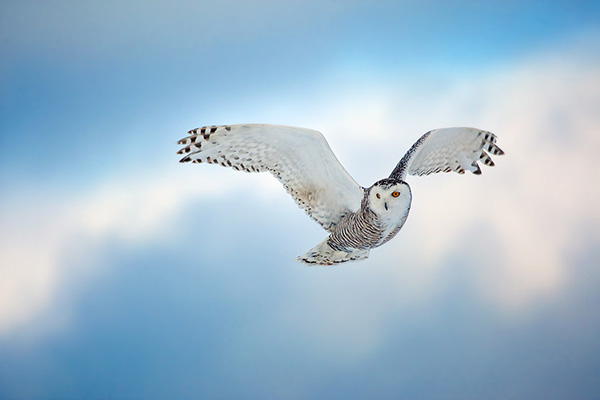 For this image taken during a wicked sandstorm, I created a counterpoint relationship between the setting sun on the left and the crest of the dune on the right. A line of blowing sand connects the two visual elements, creating an energetic yet harmonious composition. I lost all of the hair on my legs that day, but it was totally worth it! 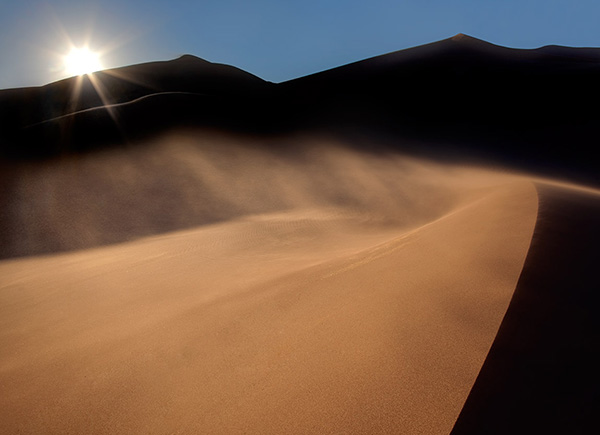 I traveled to what seemed like the ends of the Earth to make this photo of a rarely seen sea arch on a remote section of the Scottish coast. I used the rocks in the foreground to point to the arch, creating depth and encouraging the eye to travel into the scene. 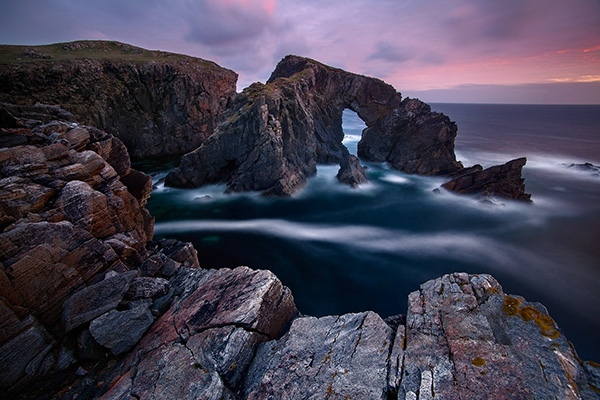 I was mainly attracted to the glowing canyon walls and the reflections of the sky in the water. I used the small cascade as a foreground visual anchor, letting the stream act as a leading element, receding into the distance and pulling the viewer's eye along with it. Further interest is created by the repetition of shapes formed by the small cascades of water. 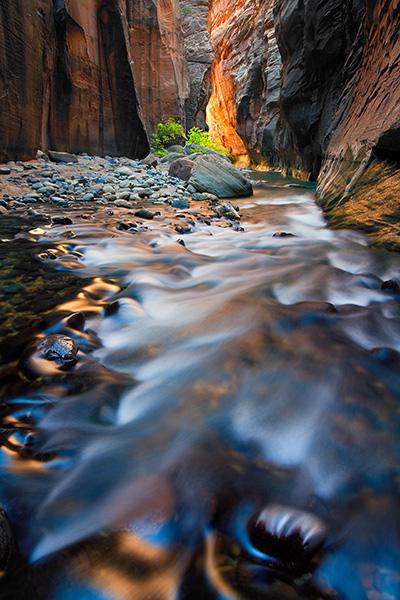 I resisted the temptation to zoom in tighter and focus the composition entirely on this high-wire sleeper, taking a well deserved nap after a hard day of monkey business. Instead, I decided to include some of the out-of-focus leaves which were lit by the setting sun. I used these highlight areas to frame the monkey, helping to focus attention on it while at the same time creating multiple areas of visual interest. This engages the viewer's attention, encouraging them to more deeply explore the composition. 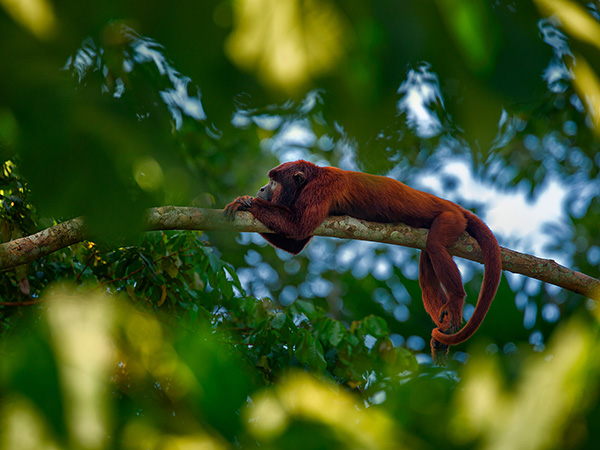 Ian is a full time professional nature photographer and a frequent contributor to leading photo magazines such as Outdoor Photographer, Popular Photography, and Landscape Photography. You can see more of his work and instructional articles on his website.

Love this post. Wonderful images and great tips we all should consider next time we go out shooting.

Wonderful examples of leading the viewers eye with key compositional elements, telling the story without distractions in the frame. Very informative teaching tool. Adding aperture and exposure settings would add to the value of the lesson. Thanks for this article.

Beautiful images – thanks for the composition tips.

Thanks a lot for those great tips!

I’ve said it many times before- the photo can be of a great subject, but if the composition is off, then it will be just that- just another of the many photos floatign aroudn the world of a ‘great subject’ BUT, get the composition right, and the viewer is forced to recognize the artistry of the photographer ALONG WITH the beauty of the ‘great subject’. Artfully composed images are hte oens that rise above the myriad of ‘lesser’ photos that were composed without skillful thought to composition-

When checking out websites, and photo sites, there are tons of photos that are ‘ok’- nothign real special, but nice- then every so often you hit o na site and notice right off the bat how skilled the person is with composition, and how they can take the msot mundane subjects and infuse life and energy and feeling into the shot merely by using creative composition (as well as other tools like light, shadow etc- but composition is the main ingredient- get it wrong, and all the other ingredients like aperature, shadow, form etc will end up being less cohesive)

I look at this total group of images and consistent text wishing to sincerely appreciate the gentleman who shared this study with us.

That having been said Glen Canyon trapped my mind and my eyes. All I can see is a group of century old elephant legs with toe nails standing on the feet of a naked female even with a companions arm and hand reaching out for a last chance self saving effort.

In spite of the perceptions I see the basic elements are strong and working to help us see whatever we see with understanding and perception.

These are some lovely images for sure but I don’t see what is “creative” about them. As a study in photographic composition, they’re exceptional. But composition and creativity are two completely different things.