If you haven't heard already, the folks at Canon Rumors have confirmed that Canon's next release of the 6D Mark II will have an articulating screen, specifically a Vari-Angle LCD. This means you'll be able to flip it out and change the angle up to 180 degrees (as opposed to just a simple flip out). 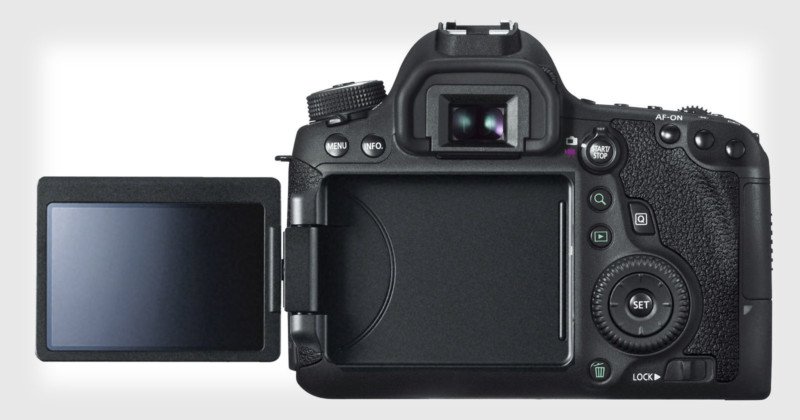 This is actually a pretty big thing for gear aficionados as this will be the first full frame Canon DSLR to have such a screen which opens up a lot of new possibilities in shooting. Other manufacturers such as Sony, Pentax and Nikon already have articulated screens on several models of full frame DSRLs, but on many of these the screen only rotates on one axis.

What's So Good About an Articulating Screen?

If you have ever shot with an articulating screen, you will know that this lends an element of diversity to your shooting angles that simply isn't possible with a fixed screen or a view finder. Shooting from the hip is much easier, as is practically any other angle.

For example, now you won't have to (necessarily) lie down on the ground to shoot from the ground. You will be able to shoot from above your head and actually see what you are shooting on the screen.

Of course, some people are not huge fans of this as it is also relatively easy to damage such a screen, and in real life when you're moving the camera around a lot and shooting from different angles, they are quite easy to knock and get caught up on things.

The Mark II will reportedly be slightly larger than the 6D and will be announced in July for shipping in August. The whole thing is making people very excited over on Reddit and the Facebook page of the 6D MkII.

I’m a news, sports and wildlife photographer. I shoot from all those positions now WITHOUT an articulating screen.
I seldom look through my viewfinder to shoot and I never use live mode. If you have a modicum of common sense, and enough experience you don’t NEED to look at or through anything for 90% of the shots you take.

The ruggedness of the shooting environment I work in means an articulating screen would be broken in no time. I won’t buy a camera with one. So … if you think this is reason to celebrate, fly at it. But if you’re a serious photographer, not a would-be cecil be demille, it’s really not that big a deal.

Only 90%. I try to keep mine at 92%. If I end up shooting anything lower than 91% blind shooting; I give up and throw my camera into a lake.

I think some elaboration is required here. What do you mean you shoot photos without looking through the view or liveview? How do you frame the shot? Just hold the shutter down and fire from the hip and hope to get something decent? How do you focus on smaller objects like birds at wider aperture settings? Or moving objects? Just focus bracket everything and hope it works out? I personally like to take 1 to 3 exposures of a subject, not 1000 to 3000 and have to sift through them after.

Calm down before you have an aneurysm, mate.

I had the 60D (strictly speaking I still do) which have the same flip screen.
It was VERY useful and pretty much the only thing I miss on my 6D.
I really hope Canon includes it on the 6D II.

As to flipscreens breaking off.. Please try to do a google search for broken flip screens on 60D, 70D or 80D.
They are not the whimsy fragile thingies you seem to think.

..but then again.. I am not a “Serious photographer”. I try to have fun when I use my camera.

Personally, I look down on anyone who doesn’t shoot daguerrotype.

Actually it is VERY handy to have, for those of us with disabilities who yes ARE serious photographers and cannot get down and lie on the ground. The flip out screens are extremely handy, I love the one on my Canon 70D for that very reason. I am used to the flip out screen and do take care, have had my 70D for almost two years now.

Finally these camera companies are catching up. That’s the problem when you are a large old company it can be hard to change.
I have owned the Olympus EM5II since it’s release. That screen has opened up new shooting opportunities for me. Especially for Macro shots where I need to shoot from a weird angle. I have used my camera for travelling and hiking. My camera is always in my hands when I am using it. It never goes in a case when I am out and about. Never had an issue with the screen getting caught. Though i still do majority of my shooting through the OVF. The screen is handy in those awkward times.

my 600D has the flip-out screen, and i’ve almost never used it. a couple of times for those awkward low shots. i’m sure it’ll be useful on the 6D, and i’ve often wondered why “serious” cameras didn’t have ’em. but i’m not sure this is such an innovation as it’s being made out to be. nor do i know why people are worried about the screen breaking off. just fold it away. in fact, because it’s articulated, you can fold the screen away against the body of the camera, protecting it further than a regular LCD screen can be protected.

This is a fine example of “trickle up technology” where the good things from LOWER models are carried to the higher ones.
As for fragile… well don’t deploy the screen and you won’t smack it. You don’t HAVE to use it. I’m old school and don’t use the ones on cameras I have access to very often… but that is more my being used to working without one, than a criticism on their value. I do know that when I have used one it’s been just fine.

I think they’re a great idea. I would rather have it and use if I choose to.
I think I’m right in thinking that the 5D mk4 now has a touch screen, at last! Much of this is camera snobbery. We hear of those people who claim to only use prime lenses and only use manual focus and exposure. No they don’t. Like the first poster on here that hardly uses his viewfinder or liveview.

Allen,
I’m sure, as a professional photographer, you’ve learned how to take photos over your head or different angles without looking through the view finder. Experience counts. But the articulating screen adds to your capabilities.

I’ve used the pull out screen in Powershot cameras for many years. I now have the 80D. One advantage of the flip out screen is taking discreet photos – e.g., sitting on a park park aiming my camera to my right on my lap with the screen pulled out and facing me. People don’t suspect that I’m photographing them. You can also stick the camera around a corner of the building and get your shot without anyone seeing you. I’m sure as a news photographer, this capability would be of value. When I’m in a crowd, holding the camera above my head, shooting a short DOF, the articulated screen helps me frame and focus on the subject.