In the previous article we discussed the preparations necessary for the execution of one full-time club photography gig. Once you are certain that you are prepared to go for it and have checked and double-checked everything (having an actual checklist written on paper is a really good idea), then go ahead and read on.

The gig featured in my example was starting at 23:00 and I intended to get there before that, but I ran into some issues with my car and got there just barely by 23:00. It's advisable to arrive at least 15 minutes early so as to avoid the rush of the early bird crowd. Luckily, I managed to get in by 23:05. I received my press-pass bracelet (which is really important because you’ll need access, and the more you have, the better). This bracelet provided the same clearance for the artists and others involved in making the event happen. Most importantly, it gave me what I needed: access. 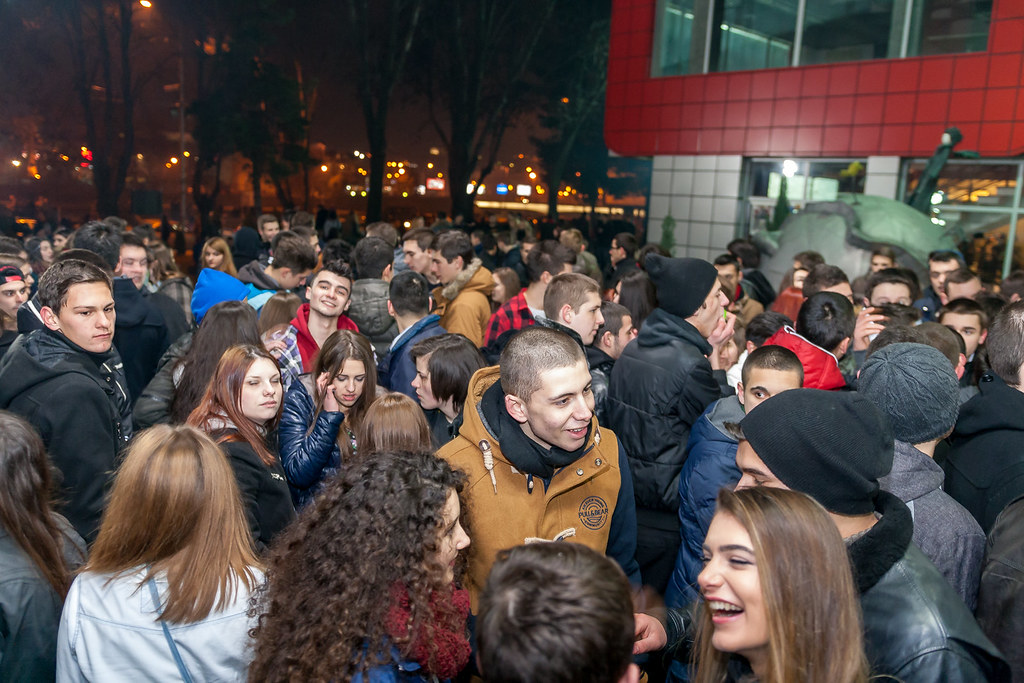 Photo by petrovskyz This is the number of people who were there at 23:00.

I immediately sought my client inside. I knew from the lineup that he wasn’t due to perform for a while, but I didn’t yet know the lineup and the layout. Once I found my client, I asked him three important things: (1) what is the timeline, (2) where is the backstage access-point, and (3) whom should I direct my attention towards the most?

Now, you might say that I should have asked for the timeline when we first discussed the gig along with most of the other questions, but the lineup wasn’t complete then, and many aspects of the gig were finalized on the day of the gig. That is a usual occurrence here; there is always some unexpected issue related to the venue or the amount of available resources that comes up, or some other obstacle delaying the arrival of key individuals.

Getting back on track, my client told me that each set lasts 50 minutes (which is an odd number, usually it is an hour, but that's a side point), and the pictures should be focused around the artists, stage, and ambiance, with few pictures of the fans and general crowd. But he also wanted some pictures of the crowd that was waiting in line to enter (the lines are usually huge because the laws are quite strict about minors going to parties after hours, so the security has to double-check every person entering. Also, smoking is forbidden in parties, which further slows down the entering process). What neither the host nor I expected was that there would be some 2,500 people waiting to enter, with the club capacity being barely 1,500. 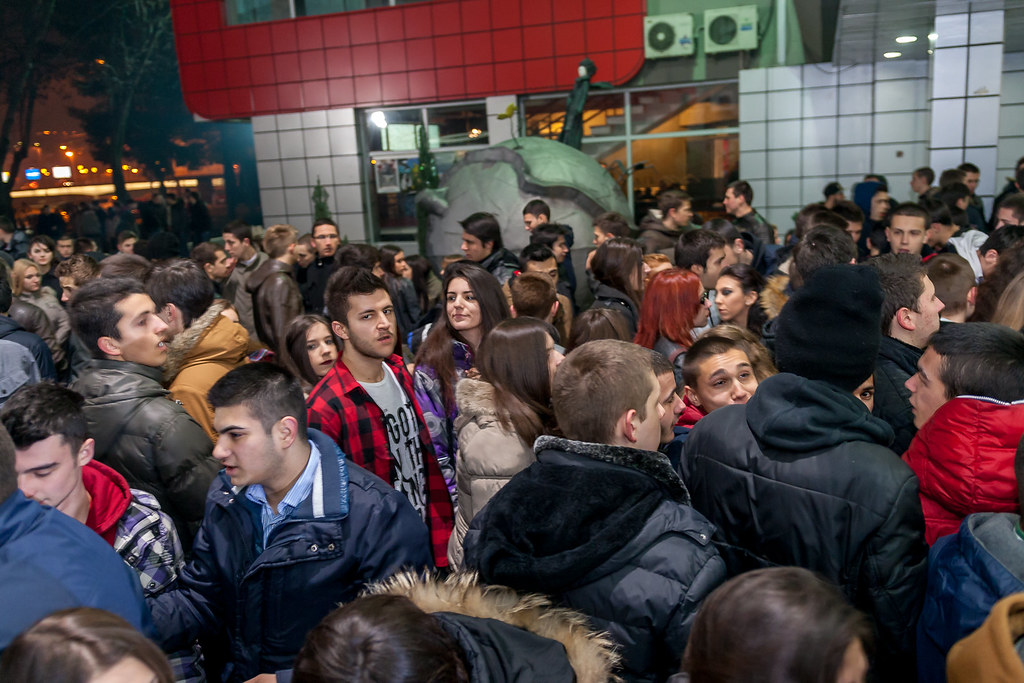 While I got pictures of the crowd outside, I wasn’t able to capture the peak of the crowd's population at around 01:00 due to logistic problems.

The club got so packed that moving through the crowd became impossible. This is the part where I had to improvise. I needed pictures of people, but I couldn't get them because I wasn’t able to move through the crowd. The solution was to shoot the front row people from the stage with a bird's eye perspective. It is a bit tricky because bouncing the flash gets rather complicated when you are playing Spiderman with one foot on the stage, and the other on the guardrail. Hey, it had to be done, somehow! 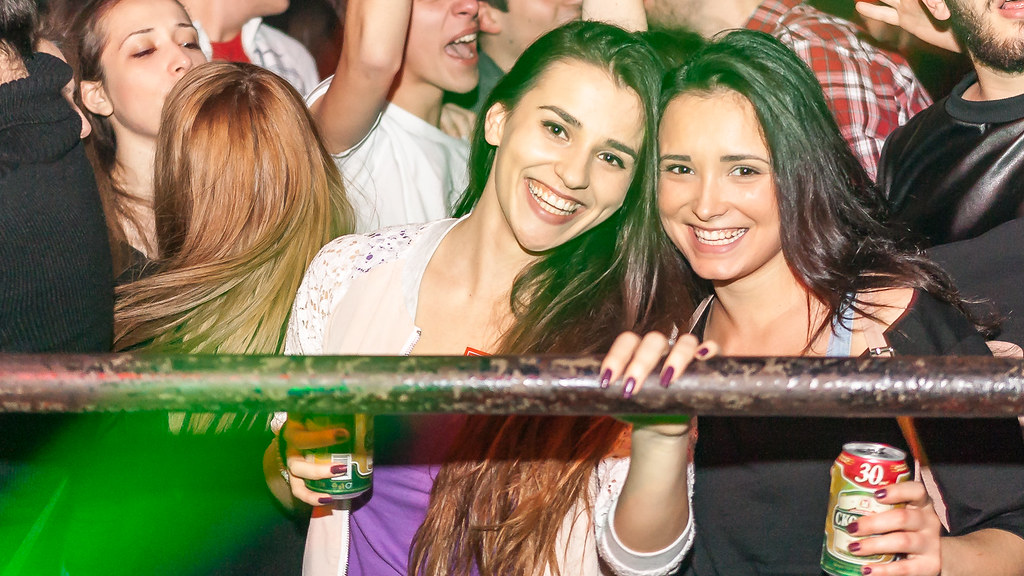 Photo by petrovskyz Girls in the front row, beer in hand and having good time.

While photographing the artists, there was plenty of light action going on around the stage, and the lights were directed at 45-degree angles from the stage. These lights created outlines (rim light) on the artists, making for really tricky and cool shots. Those lights moved unpredictably and were out of my control, so I had to “spray and pray” that one of the exposures would turn out acceptable. I took advantage of the way my flash bounced from the opposite side to create fill light and define the subject as well as possible. 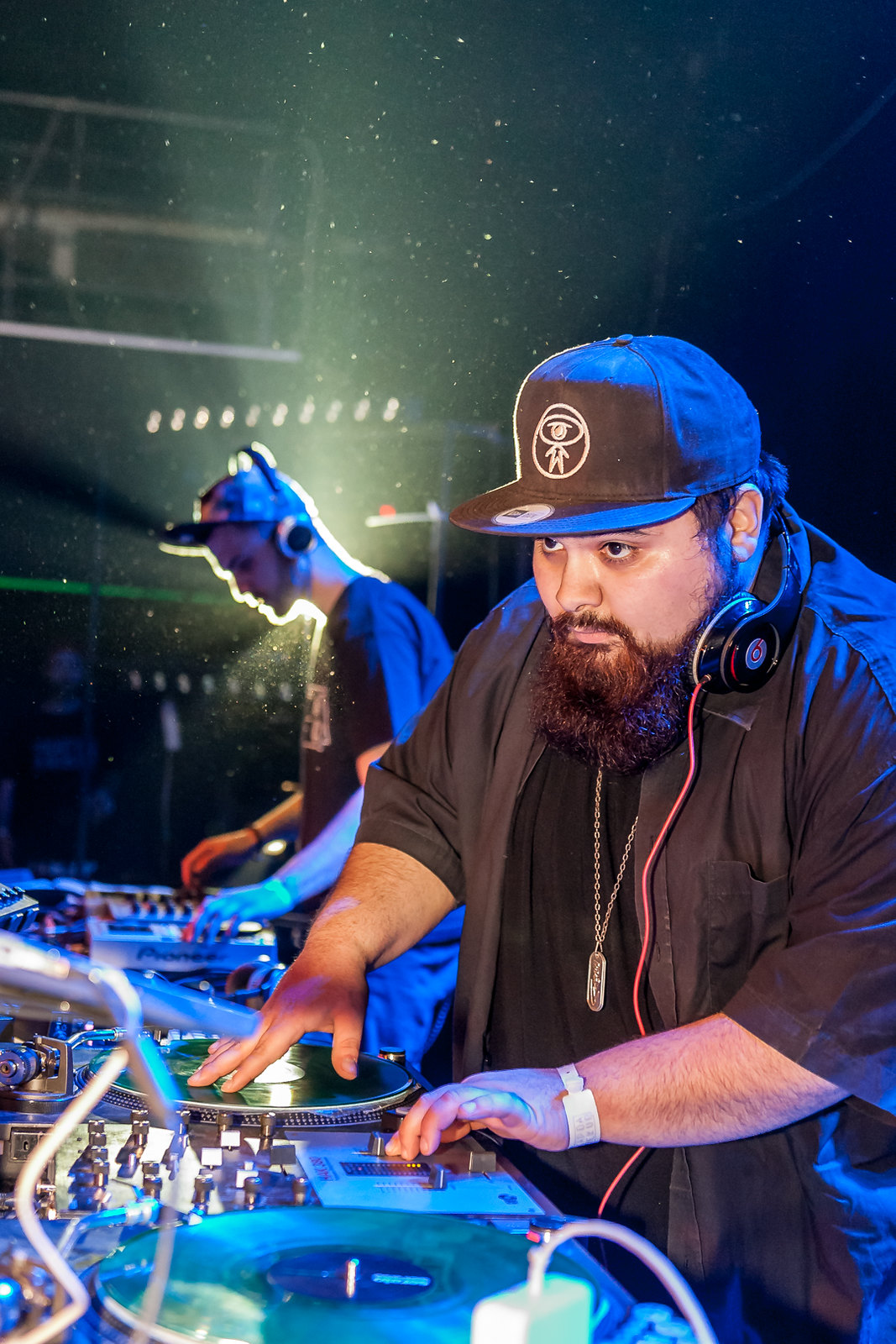 I often shoot things like this in portrait-mode. Then, with the flash to the side, I pull out the card on the flash to direct some of the light back and bounce the rest of the flash off of the ground or side walls. A good thing about shooting in clubs is that there is always something to bounce the flash off of. Most of the time, I used the equipment such as laptop screens to do so.

Although I spent most of my time shooting from and on the stage, I did spend some time backstage (simply a really small and messy room), which had a door opening to the side facing the crowd. This gave me a slightly different perspective on things, as an alternative. 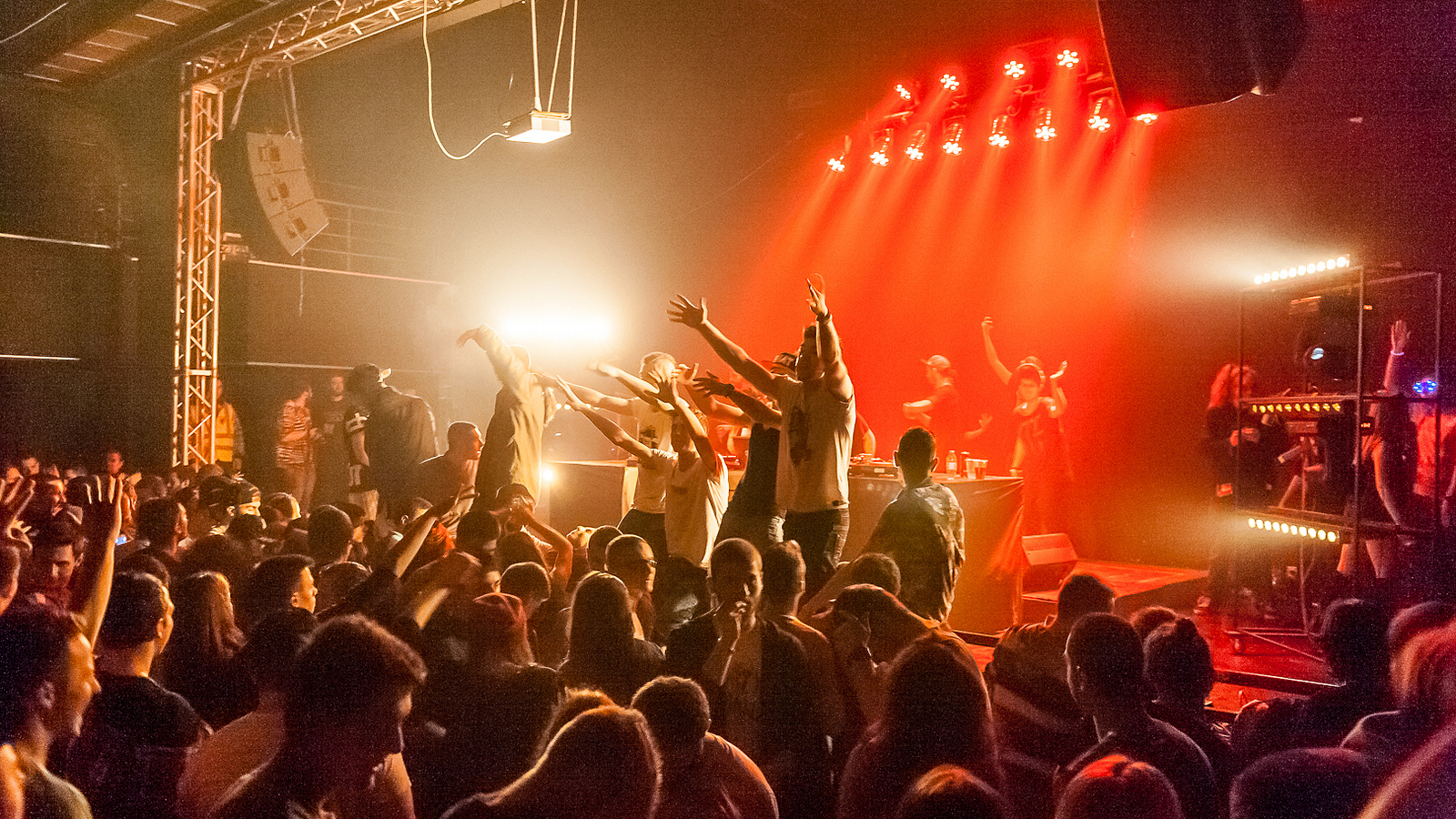 Towards the end of the party, there was a little more room, so I managed to join the crowd and snap a few pictures between the people who were there the whole time (the truly loyal fans).

During the time that I was there, from 23:00 to around 04:30, I managed to fill my SD card (and didn’t bring a spare one – rookie mistake), which means about 1,200 shots were taken. From these, I had around 120 keepers, and about 100 more that could suffice, but I didn’t want to devalue the shots I had already deemed excellent by sending mediocre ones along with them. The client didn’t specify how many photos they wanted, just that they needed good photos, so I provided those. They were satisfied with the end product, making it a job well done. 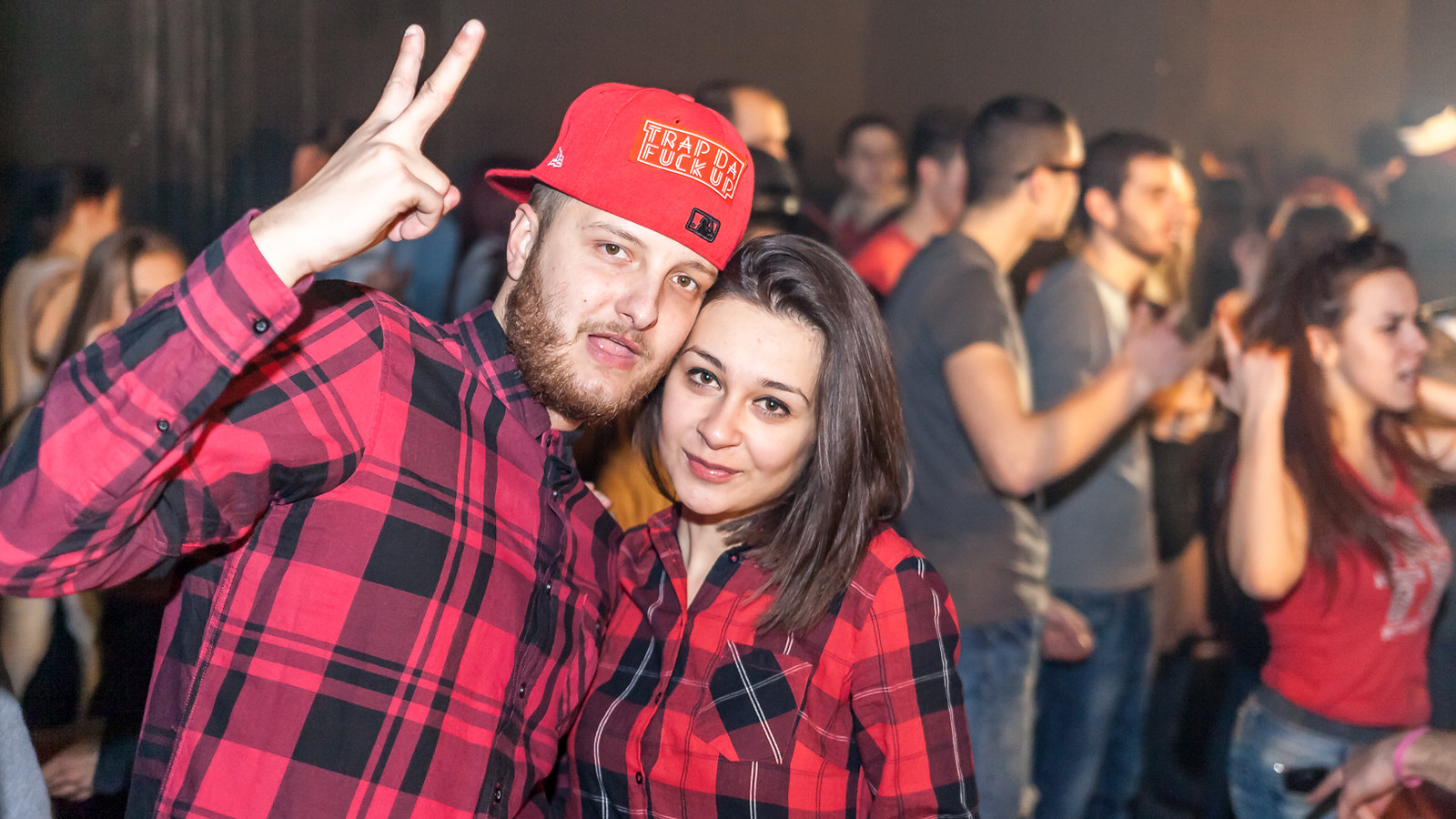 Check out the next article for advice on post-processing and emailing solutions.