Lino Manfrotto passed away on Sunday, February 5th aged 80 years. The former photojournalist from Vicenza was most well known for his role in founding the famous Manfrotto brand of tripods.

Manfrotto noticed in the 60s that high quality camera and light supports were rare in the market and so began manufacturing his own designs in his garage towards the end of that decade. In 1972 he met Gilberto Battocchio who was a technician who worked at a local mechanical company in Bassano, Italy. 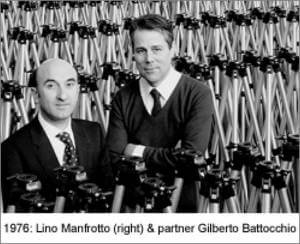 The first Manfrotto tripod was released in 1974. By 1986 Manfrotto had added 5 more manufacturing plants in Bassano and in the following couple of years added another 5 plants in the industrial zone of Feltre, in northern Italy. During this decade Manfrotto cemented his company as the standard for camera support by which all others would come to be measured.

In 2010, Lino Manfrotto, who had developed a reputation for always being on the cutting edge of the industry, launched the Manfrotto School of Xcellence as an online training resource for photographers and videographers. In 2012, the Manfrotto Imagine More blog was also launched for ideas on getting more out of photography.

As far as influential people in our industry go, Manfrotto carved out a very important reputation and will be sorely missed by professionals and amateurs alike.