Before WWII Japanese products had a reputation for being seedy and inferior. Sony and Toyota changed that, with help from other Japanese manufacturers. Korea had a similar image problem. Then Samsung started making flat screen TVs. I think Yongnuo may be the first wave of a sea change in our perception of Chinese electronics. In the photo-blogosphere, it seems like there are lots of fans and few detractors of this brand, so a few months ago I picked up a flashgun and transmitter set to do my own evaluation. 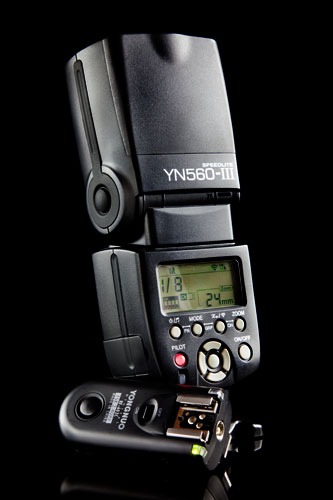 1. Great Features and Inexpensive – The YN-560 III has a guide number of 58 meters at the 105mm setting for ISO 100, about the same as the popular Canon 580EX II and Nikon SB 800 units. It also features the power zoom from 24-105mm perspective and a fold out wide-angle diffuser to spread the light to 18mm perspective. The head tilts and swivels. Best of all, it has a built in radio receiver! And it’s inexpensive! So it’s a great solution for anyone using small flashguns in off-camera set ups as the only external kit for the radio slave function is the small transmitter that mounts to the camera’s hot shoe.

2. Quick Start-up – Just pull out the flashgun. Turn it on. Put the transmitter on your camera. And you’re ready to go!

3. Built-in Reflector Card – It has the little pull up white card that makes an adequate bounce when working close in. I like to hold it in my left hand with a small Flashbender on it to maximize efficiency. I point it to the ceiling at arm's length and bang – bang.

4. Easy Functionality – The buttons are mostly easy to understand. The unit has an eight-stop range from full power to 1/128th power. There are four directional buttons that take the power up and down in full stops, using the left/right buttons, or half stops, third stops or sixth stops (custom function setting), using the up/down buttons.

5. Use as Modeling Light – In ‘Multi’ mode the test button supplies a pulse that can be used as a modeling light, really useful for lighting portraits or products.

6. PC Sync Socket and External Power Supply Port – Under a small side panel there’s a PC sync socket and a port for an external power supply. The battery door has a metal hinge and the mechanism is easy to open and close.

7. Decent Build Quality – Overall the build quality seems quite decent for both the flashgun and the transmitter. The transmitter does the simple job of transmitting the signal to fire, no fancy stuff, but it does have a green ‘power on’ light and a red ‘transmitting’ light which are helpful in monitoring what’s going on with the unit. It also has a hot shoe on the top and a PC sync as well as a 2.5mm socket.

Just weeks after I bought my set up they came out with the RF-603c II version that has a locking wheel for the hot shoe and the switch has been moved to the side, both welcome changes. The recycle time at full power on the flashgun is a respectable 3 seconds and with the external battery pack it drops to 1 second. I often have the flash set to 1/8th power and I can fire a burst of three shots on continuous drive with the flash delivering the proper output each time.

2. Unexplained Mode – There is another hint of possible future functions with an upgraded transmitter. When you select the radio sync option the ‘Mode’ button provides a third option ‘Manual’, ‘Multi’ and ‘- -‘. The last of which is unexplained and the flash doesn’t fire in that mode.

3. Ambiguous Notation on Some Buttons – There are four buttons for controlling the various functions and the central two have ‘GRP’ printed between them suggesting that you would hold them down together to select a ‘Group’, but nothing happens. Holding down the left-most two buttons allows you to select custom functions (you’ll need the user manual to make sense of these but it’s things like – how long until the unit goes to sleep) and holding down the right-most two allows you to select a radio channel for the flashgun.

4. Fiddly Placement of Some Switches – The transmitter has corresponding switches under the battery door. That would be fiddly to try to change quickly if you were getting interference but I’ve not had any problems so far.

1. Slow Sync Speed – The sync speed of the RF-603c is slow. Below the sync speed of the top end DSLRs and well below what a leaf shutter can do. Other radio slaves are capable of higher speeds so that is a distinct shortcoming of this set up. The RF-603c II has apparently addressed this issue to a degree and is capable of speeds up to 1/320th. The YN-560 III isn’t a high sync speed flashgun but it has a very sensitive optical slave so it’s possible to create a work around solution with a high-speed sync capable flash as a master in multiple light set-ups, or put the master on low power so it’s not involved in the lighting but is triggering the other units.

2. Chance of Failing – I've only been using the units for a couple of months but they’re working very well and the user reviews on the major online retailer's sites show four and five star ratings from 90% of reviewers and 1 star from 10% of reviewers. The low scores are mostly due to units failing either immediately or after a few months.

A couple of years ago I bought a brand name Japanese microwave. After 10 months, it quit working. I got it repaired under warranty. Couple of months later it quit again, the repair place repaired it again even though it was out of warranty. Couple of months later it quit again. I spent a lot of time reading reviews of microwaves and realized that at every price point there was a certain percentage of reviews complaining that the microwave died before it was two years old. I ended up buying the exact same microwave again as I didn’t see that any microwave in the price range was getting better reliability ratings and even those that were three times as expensive had similar issues. That just seems to be the state of consumer electronics these days.

Hopefully, my YN-560 III will last for several years. As I mostly use flashguns on the manual setting in off-camera set ups this combination is working well for me. I plan to get an RF-603c II and a couple more YN-560 III units to add to my flashgun arsenal.

is a professional photographer based near Bristol and Bath. You can read more about him on his photography website!

Mine just failed. No reason, just not working since the last time I used it. Total mystery.

I have two YN-560 II flash units and they work really well. For the price, I think they do a great job. I could buy 6 of these for the price of a Canon 600EX-RT.

I combine mine with Cactus radio triggers. It all works great. There’s no TTL, but hey it’s not a perfect world.

If you are just getting in to using off camera flash, the Yongnou flashes are the way to go.

I have just ordered the 560iii, paid for with Nectar points so free, to use on my canon 60d for high speed photography, along with the RF-603C units, £22, I have used for about two year, no problems so far, with a very old Nissin 132AF C flash I found in a second hand shop for £1 and have had some very nice results.