Ever seen a photographer in a movie? Well, we'll leave out the likelihood that it was a male photojournalist in a war zone exposing the “truth” (like no other type of photographer exists) and move straight onto the golden cliches that Hollywood likes to push. Here are a few things that our new hero almost certainly has:

Rugged Good Looks – Well this one goes without saying. We are all a remarkably handsome bunch of people. No arguments with that one! Let's move on… 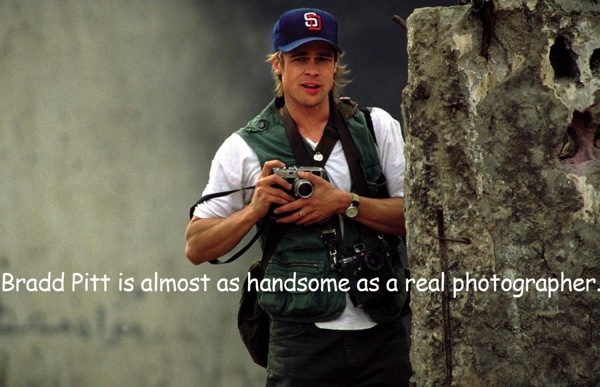 An Infinite Travel Budget – When you hit the road in a movie, it's all about the story and the shots. Now the photographers in any movie, in addition to being remarkably handsome and incredibly stylish are also able to travel basically forever. Without thought. Or presumably cost.

I guess that means they are all really rich. Which is great, because the reality is that most photographers earn about half the average national income. Personally, I'd be taking the movie gig any time.

An Uncanny Ability to Find Awesome Bars and Hotels in the Third World – Anybody who has ever been to a developing country will know that the chances of finding a good bar in or near a warzone can be somewhat limited. Hell, finding clean water is often a pretty challenging experience, let alone a traditional Parisian Sidecar cocktail made to specification by a barman wearing a tuxedo who was trained at The Ritz.

A clean toilet – now that's something a lot of us would actually settle for.

Many have horror stories of arguing with a dreadlocked Aussie backpacker who was “finding himself” by working for food at a crappy hostel with bed bugs and trying to charge extra for a shower. I honestly wish we could have this superhuman ability to find the amazing war hotels of Hollywood legend. I'd probably move in.

Aviator Sunglasses – What is with that? Has anybody even worn aviators since Top Gun ruined it for everybody? Just say no!

A Fake Tan – For some reason a real tan never really made it into the movie director's thinking.

A Crappy Vest and Cargo Pants – Now I know some folks love to get around in this getup in real life, (and there's absolutely no judgement from your Light Stalking family), but these folks are an exception rather than a rule. Except in Hollywood, where every person who comes within 10 feet of a camera is suddenly wearing them – usually in beige. 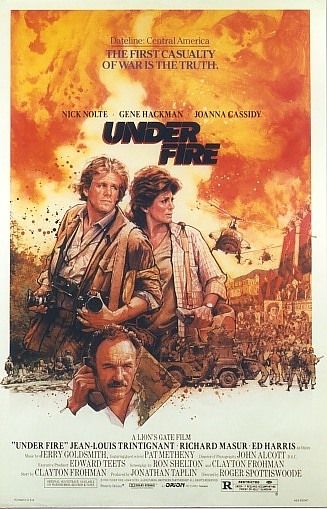 Above: Under Fire – A Wonderful Movie Brought to You by the Colours Beige and Orange

A Boyishly Idealistic Fervour to Change the World – Now sure, there are plenty of reasons to be appreciative of photographers and the role of some in history.

On the other hand, there are a vast swathe of us who just like producing quality images – cos… you know… pretty.

A Super-Human Abilty to Find Reliable Communications (Phone, Internet) in War Zones – Anybody who has done much travelling (anywhere really) knows that communications are a huge challenge to get right. Scrambling to find a sim card or an internet cafe with the slowest connection takes an inordinate amount of time when you arrive in a new country. This goes triple if the country is a developing nation. Having coms sorted just doesn't happen unless you have a lot of money (which takes us back to the infinite travel budget thing).

They Can Only Exist in Warm Climates – Seriously, it's like photographers don't exist in cold areas according to Hollywood. Look at this list of movies about photojournalism – not a single one is set in a cold climate!

A Lack of Personal Humour – Seriously, can't just one of our photographer heroes or heroines crack a joke? Just once?

All Fun Aside, Here are Some Great Movies With Photographers

Check them out and leave us some movie suggestions of your own in the comments!

Eyes of Laura Mars with Faye Dunaway. (All about photography – a thriller!

We’ll, I don’t know that the predominant theme was about photography, but Bridges of Madison County was somewhat about a photographer. Was it great? Eh . . . Some people liked it.

Ahh man, you left Bridges of Madison County off your list…and maybe the ability to find smoking hot companions while on assignment

TBH I haven’t seen that one! Will add it to my list of movies to see. 🙂

The Bang Bang Club. About as real as it gets. Pulitzer Prize winning photographers committing suicide, people living in squalor or risking their lives for a photo. A great movie about some life changing photographers.

The thing I have always found strange is the film photographers must be using ortho film and paper because their darkrooms are all equipped with red safelights.

While The Secret Life of Walter Mitty was specifically about photojournalism, it was a major component and had a great scene about a photographer in the snow!

why not do this photo again of BRAD PITT and spell his name correctly!

Surprised Salvador was left off the list . . . fits right in with most of these cliches and a darned good movie!

High Art is a great movie where photography plays a key role.

Okay, I must have missed it..
In what movie was Brad Pitt a photographer?
Thanks