Personally, when it comes to going out to photograph in London, I’m a lone ranger.

I enjoy getting lost in my thoughts, or having a podcast or some music in my ears, and getting lost in a back street somewhere while accidentally bumping into previously unexplored parts of town.

However, sometimes I do crave the camaraderie of fellow photographers.

For those times, in London, I’m spoilt for choice. There are many photography groups that do photo walks here. The following are five of my favourite group walks in London. 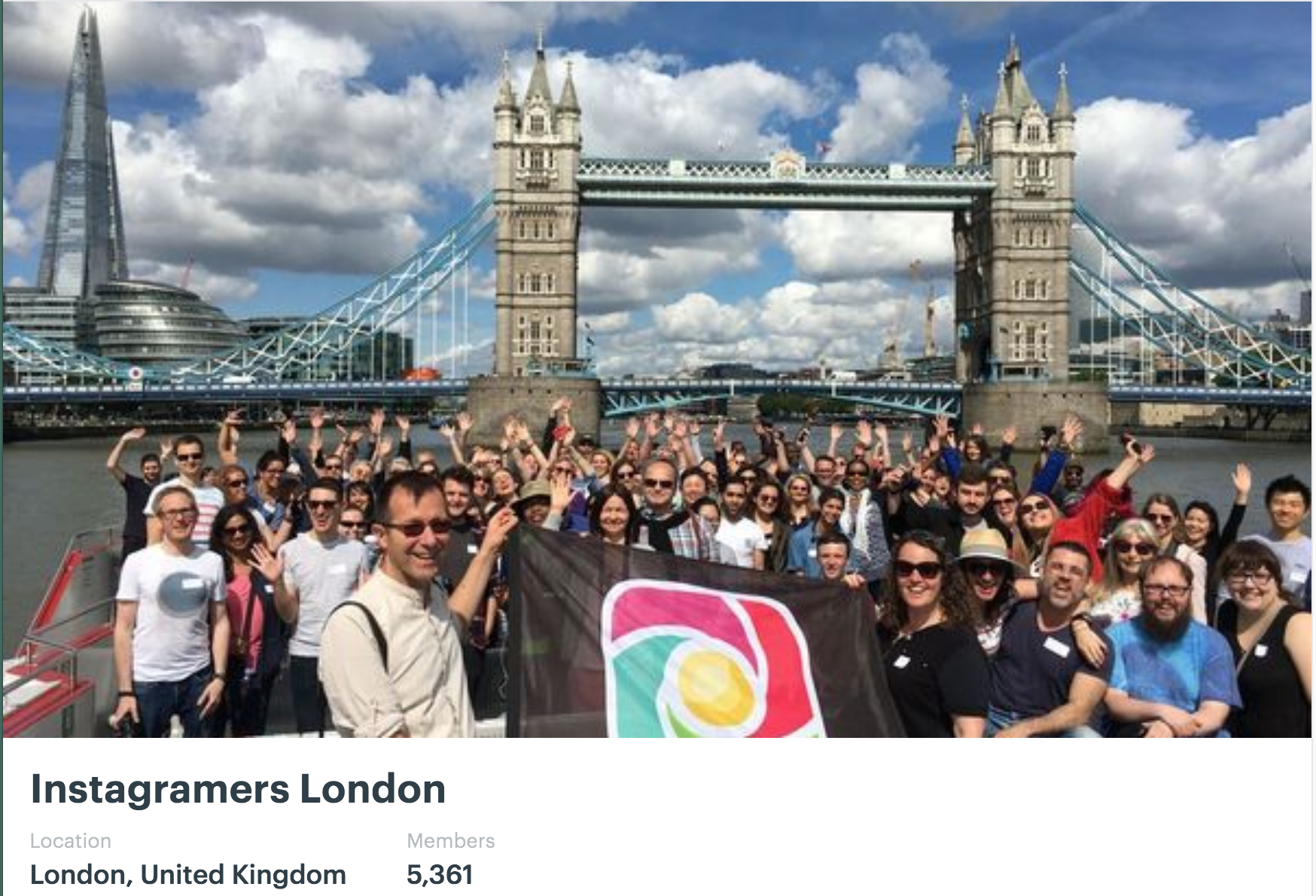 At the time of writing this article, the Instagramers London (IGersLondon) group has 5,355 members.

Obviously, not all five thousand plus members turn up to events at the same time, but meetings are usually in the region of 50 to 100 attendees.

This is a great place to meet fellow photographers, connect with new people and have fun seeing parts of the city you may not have previously explored. The group was originally based around Instagram, so people started off using their smartphones to shoot, edit and post photos to Instagram with a hashtag provided on the day. Nowadays, people shoot with whatever camera they have.

There is an annual worldwide event called the “Worldwide InstaMeet” in which this group participates. I have been to a couple of these and had a blast.

The group is free to join and most events are free and unlimited. Occasionally though there is a fee to pay or limited spaces, but these are usually due to access restrictions or entry fees into venues. 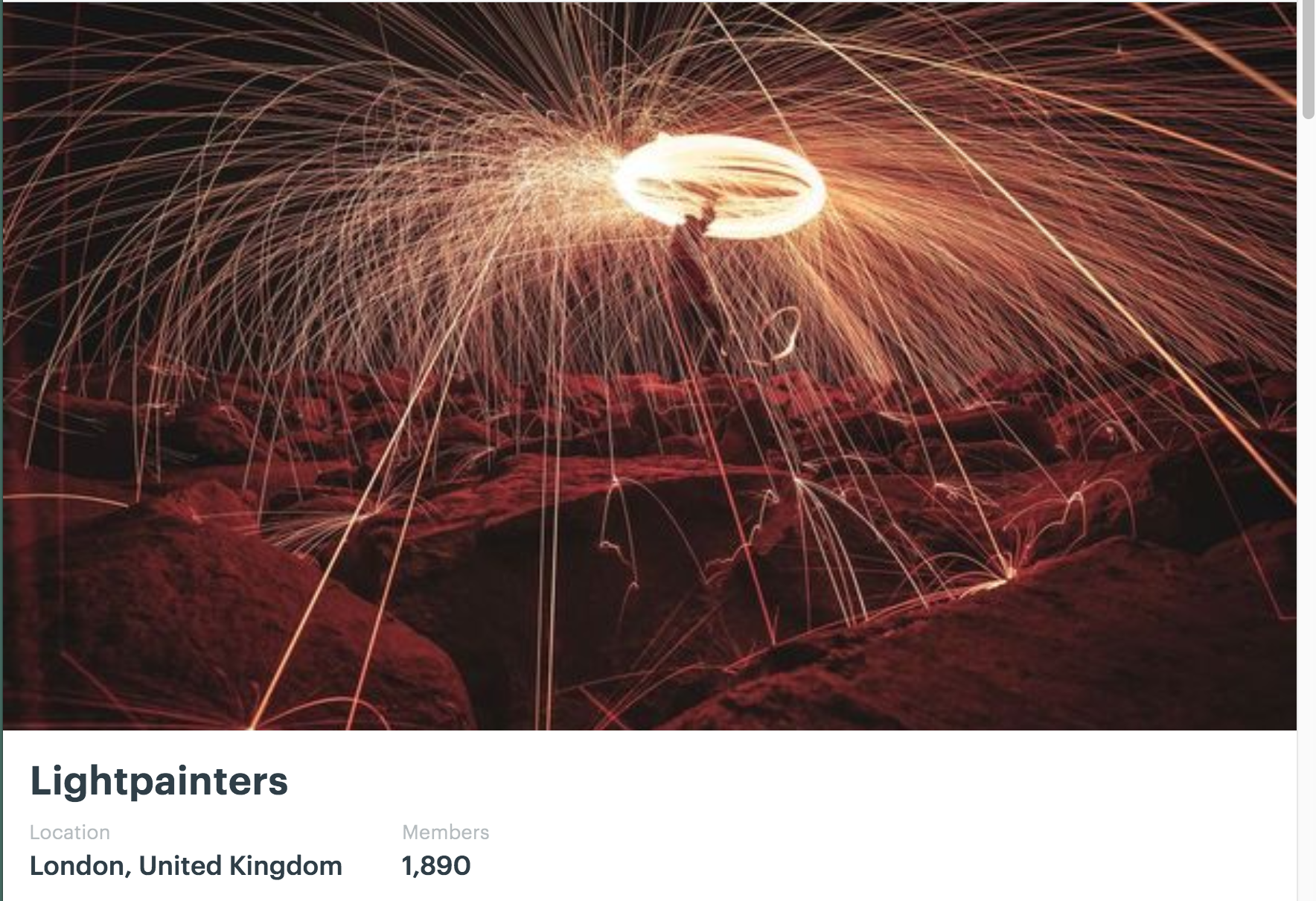 Organisers: Kristine Vilsone and others.

Like the name suggests, this is a group for those interested in light painting photography – which is a genre of long exposure photography. The group has regular meets in London, usually at night due to the nature of the photography.

You can expect some steel wool spinning, fibre optics and poi spinning as well as other light sources like candles and torches. Due to the hazards associated with fire, the spinning is only done by experienced people.

This is an awesome group to join if you’re interested in something a little different to the usual photo walks.

There is also an opportunity to learn from other, more experienced, photographers in the long exposure and light painting genres.

The group is private but free to join. Events usually incur a fee to pay for the props and the personnel involved in putting the light spectacles together. 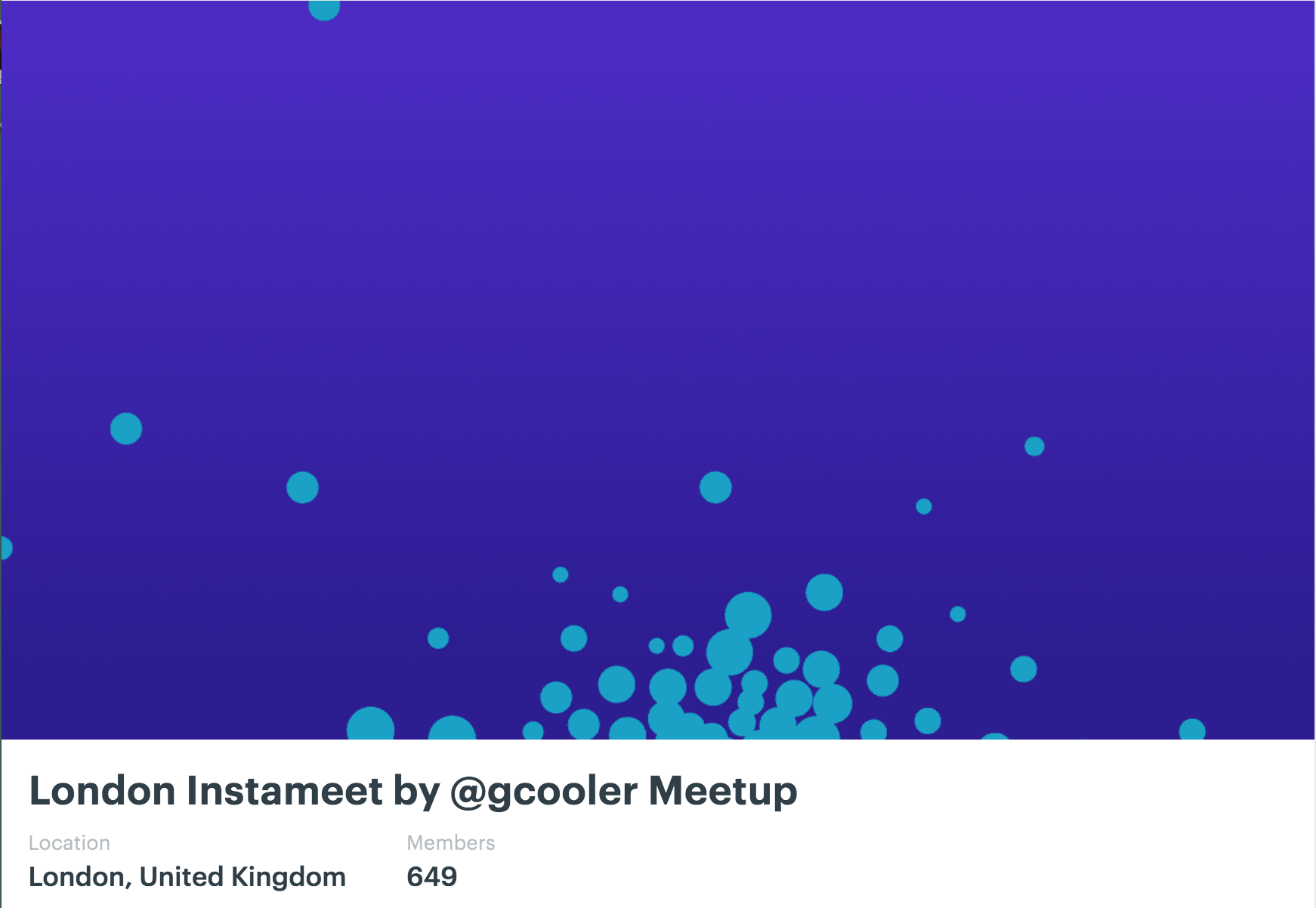 Not to be confused with Instagramers London, London Instameet is a smaller, usually more intimate group by the Instagram influencer Avi Levy ( @gcooler ).

The meetings are less frequent than in the other group, but when they do happen, they are a lot of fun. There is a certain level of overlap between the two groups since they’re in the same city, and both are oriented around Instagram.

Like Instagramers London, the main selling point of this group is the social aspect. Even though I personally prefer doing street photography alone and lost in my own world, there is something about doing photography in a group. There’s also safety in numbers. Besides, photographers sometimes make good models too.

Since Mr Levy is quite the social media influencer, there is often access to parts of the city that would otherwise be off limits.  For example, on one photo walk, we got access to rooftops in Piccadilly Circus!

That is a rare opportunity in London.

The group is completely free to join and the meetings are free too. 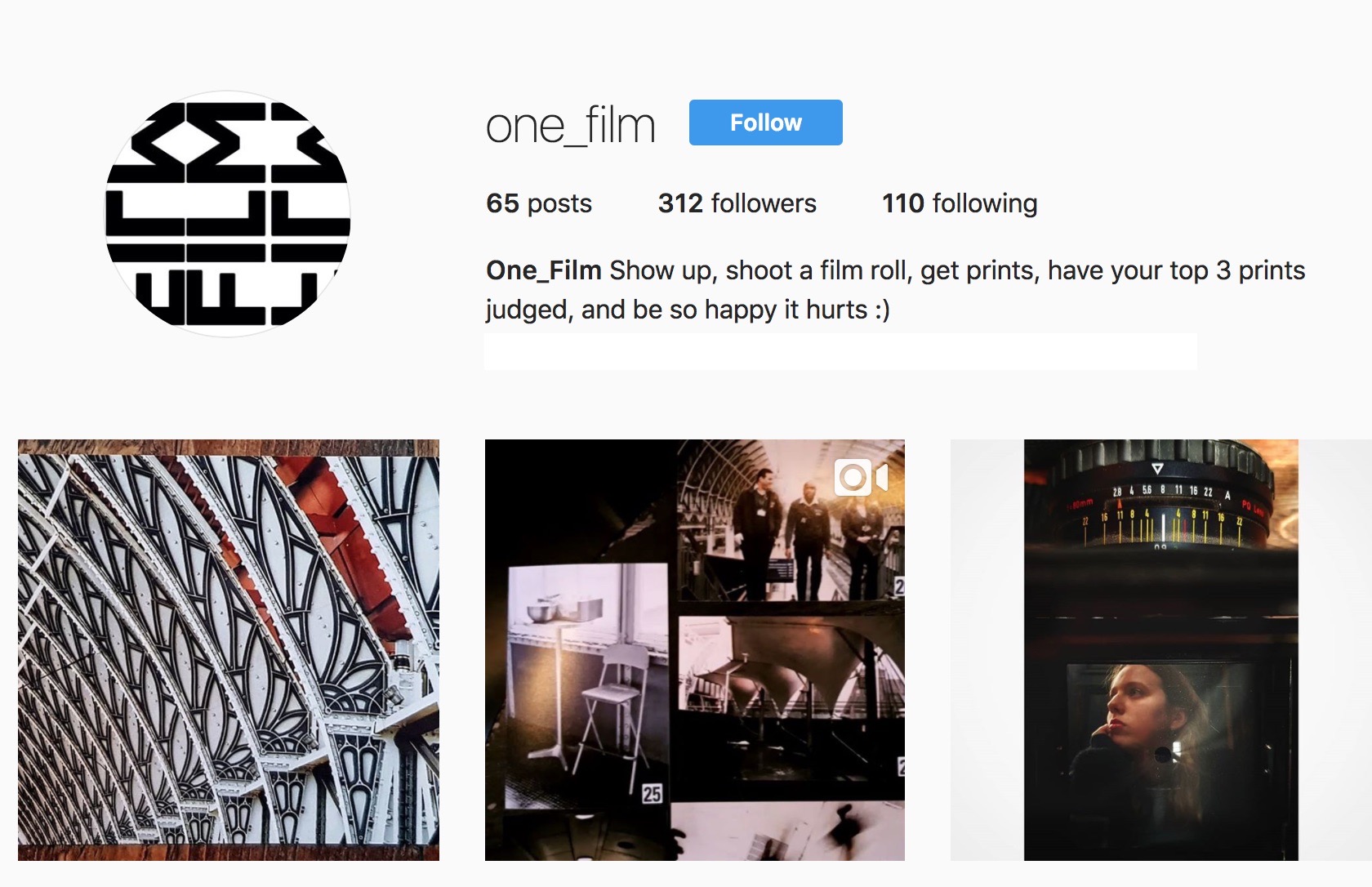 As you can probably imagine, this one is close to my heart and is one of my favourite photography walks in London.

It is a private, intimate group that is not that well known yet. It’s a film photography based group with monthly photo walks in London.

The premise is you show up with one roll of film loaded in any camera of your choice and shoot the entire roll on the day. The film is then developed same-day after which you submit your top three prints to a photo contest judged by everyone.

You have to vote for three photos that are not your own so that the photo with the most number of votes wins. There is often a prize of some kind for the winner, as well as consolation prizes for 2nd and 3rd places.

This is incredible fun for film photography enthusiasts and camera gear geeks like myself. There is often a variety of film cameras present, ranging from simple point and shoots to old-school vintage medium format cameras and Polaroids.

Also, the judging of the photos usually happens in a pub, so you can imagine it's a jolly merry session. 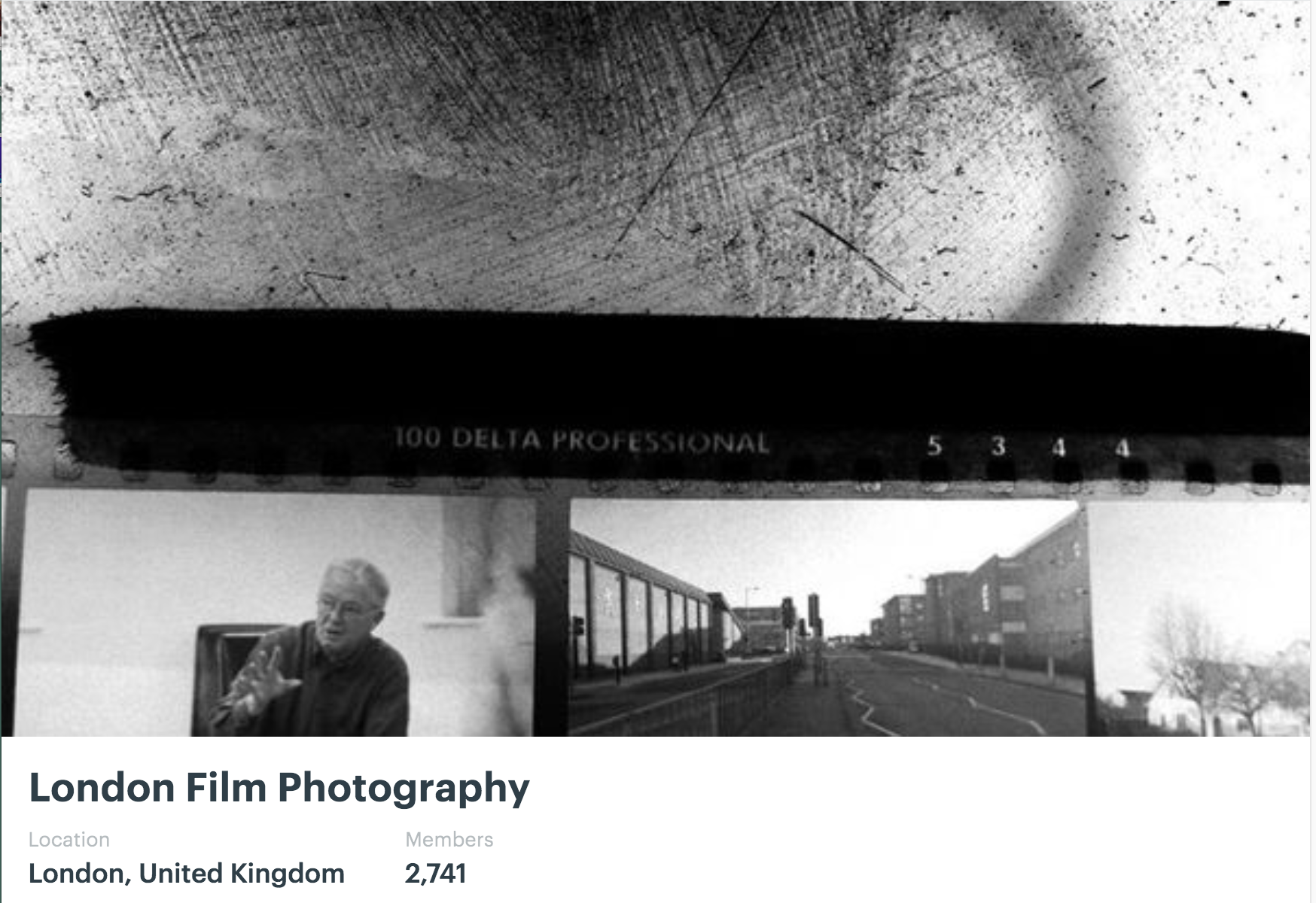 This is a relatively new but very large group with nearly three thousand members at the point of writing this article.

The group is geared towards everything non-digital in terms of photography and encourages the traditional methods. There is a large number of film photography experts and enthusiasts in this group and it is a great opportunity to learn from them.

Even well-versed film shooters like myself have a lot to learn from this group as there is always someone with knowledge in an area that I know little about, such as pin-hole photography, Large Format photography and so on.

The photo walks are fun and engaging. Again, the key part of these meetings is the social aspect.  You are participating in an activity with like-minded people around a common interest. You can get ideas from others about what their film development process is, what chemicals they’re using and techniques you might not know about.  This is also a great forum to seek help concerning technical issues with your film camera and other gear.

The group is private but free to join. The photo walks are also free but obviously film photography costs money.

If you live in London or the outskirts, or you’re visiting the city, and you ever feel the need to join any of these groups, you can do so with confidence. I’m more than certain you will most likely go away with a positive experience.

If you have a favourite walk, either in London or another town, please tell us in the comments below.