In a recent article we took a look at the history of Nikon cameras, from their early beginnings to the international brand it is today. Perhaps, Nikon’s biggest rival in recent decades has been Canon, and in many respects the story of Canon is very similar to Nikon’s.

As with Nikon, Canon was formed as an optical company named, Seikikōgaku kenkyūsho or Precision Optical Industry Co. Ltd. Despite it’s grandiose name, Precision Optical was in reality a small street side workshop in Tokyo operated by Goro Yoshida. Yoshida was fascinated by the precision engineering of German cameras such as Leica and Contax but could not understand their exorbitant prices. He took to disassembling a Leica 35mm camera and on discovering that there was nothing inside to suggest that the price should be so high so he decided to engineer his own Leica copy. The prototype, Japan’s first home produced focal plane-shutter camera, was revealed in Asahi Camera Magazine in 1934. It was called Kwanon after the Buddhist Goddess of Mercy.

The Kwanon went through several prototype incarnations but in fact never went on sale. In 1935 Precision Optical registered the Canon trademark and in 1936 their first production camera, the Hansa Canon was released. Like its predecessor, it was a 35mm focal plane-shutter camera. Although Precision Optical had the ability to manufacture the camera, they had no expertise in lens technology, to source the lenses for their camera’s they turned to Nippon Kogaku Kogyo, the company that would eventually become Nikon.

By mid 1937 with good sales of the Hansa Canon, Precision Optical decided to start manufacturing their own lenses and by 1939 they were producing the Serenar series of lenses for their camaras.

As with Nikon, Precision Optical’s growth accelerated through the war years, one of their main products being lenses for an indirect x-ray machine. By 1946, Precision Optical had expanded its range to include the JII, and the SII. The SII was revered by officers in the Occupation Forces and sold in great quantities. In 1947 the company changed its name to Canon Camera Co. Inc.

As with Nikon, in the 1950’s Canon produced a product that raised it above the crowd. In Canon’s case it was the Serenar 50mm f1.8 lens. It was a lens that was way ahead of its time, effectively eliminating flare that was so prominent in many lenses of the day, and allowing Canon to lead the field in optical technology. 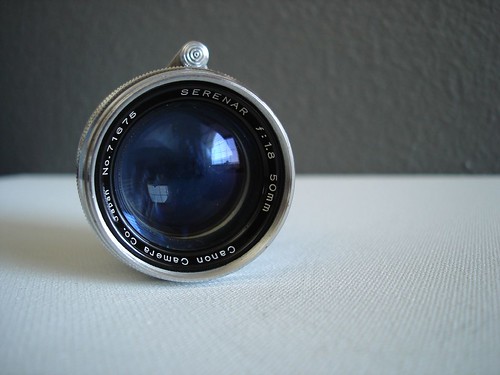 In the 50s and 60s Canon diversified its product range, moving into electronic calculators, copy machines and audio technology, however, its core products were still photographic, and the release of its first SLR camera, the Canonflex in the same year as the Nikon F started the rivalry that continues to this day although it was not until 1971 until that rivalry really reached the professional market with Canon’s release of the  F-1, a high speed SLR along with its highly successful FD lens mount. The F-1 sat squarely against Nikon’s F series of professional cameras.

In the 1980s Canon introduced the T series of SLR cameras, highly automated and with styling cues that live on in today’s Canon cameras. The T series were highly successful although the advances in technology were beginning to have an effect on the usefulness of the FD mount. Realizing that to continue to innovate, they would need to change the lens mount, in 1987 Canon introduced the highly controversial EF lens mount. The EF was not backwardly compatible with the FD mount meaning photographers upgrading their cameras would also have to purchase new lenses. The EF lens mount became the backbone of the Canon EOS system that prevails today.

Again, in a path very similar to Nikon’s, Canon’s introduction to the professional digital market was through a collaboration with Kodak, with the introduction of the EOS-DCS, released in 1995. Unlike Nikon, Canon’s first true DSLR was aimed aimed at the enthusiast market rather than the professional.

Released in 2000 the camera in question was the EOS 30D, with its 3.2 mp sensor. It opened the door to the prosumer market and allowed Canon to use the profits from the sales to create a lead in the rapidly expanding digital market.

The following year, the first professional DSLR was released, the 1D and for the early years of the new millennium Canon stole a march on Nikon in both the consumer and professional markets. The release, of Nikon’s D3 and D700 arrested that lead a great deal, leading Canon to think more about low light capabilities than the constantly accelerating megapixel race.

There is no doubt that over the last four decades, the rivalry between Nikon and Canon has been at the forefront of the photographic technological race. Ultimately, the biggest winners in this race are us, the photographers.