There are an extraordinary number of photogenic cities in Europe, London, Paris, Rome the list goes on. Perhaps one of the most underrated of those cities is Lisbon, Portugal. Lisbon has a population of over 3 million people yet seems to retain friendly small city feel. It is also regarded as being one of the oldest cities in the world, pre-dating the Roman Empire. With its historic architecture, quaint trams yet also modern, progressive architecture, Lisbon is an ideal playground for Europe-based photographers.

To my mind the best time for a photographer to be in Lisbon is spring. In spring the weather will be pleasant, not too hot and there will be good hours of daylight. The light in spring is often very good, beautifully clear and without the potential haze that summer brings. Being on the Atlantic coast, weather can be changeable so don’t expect sunshine every day. Autumn is also a great time to visit Lisbon, again the light can be very good. 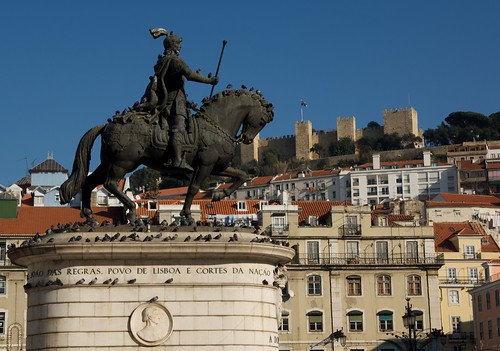 Spring is a great time to be in Lisbon by Jason Row Photography, on Flickr

Lisbon Center: A photographer in Lisbon will be in his element just in the city center. Two large squares make up the central part of the city, Praca Dom Pedro and  Praça Figueira each with beautiful statues and fountains. Surrounding the squares are 18-19th century buildings each with unique character, those fans of leading lines will find the mosaics on the pavements a real compositional treat when photographing the surrounding architecture. The square is home to several of  Lisbon’s old cafes. With their splendidly dressed waiters these make great locations for street and candid photographers. All Lisbon’s life can be seen near the squares or in the narrow surrounding streets. 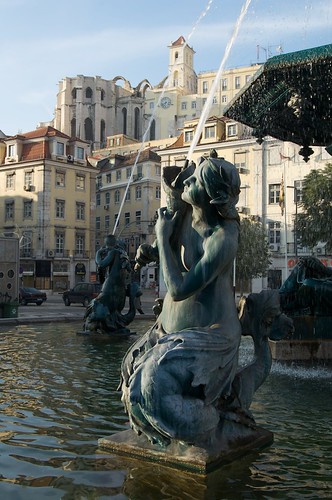 A fountain in one of the main city squares by Jason Row Photography, on Flickr

Lisbon itself was built on seven hills, two of which rise sharply from the city center. As with the center, the streets climbing the hills are full of old shops and cafe’s rarely seen in today's modern cities. Another photographer’s delight are the old trams that ply these steep streets in their bright yellow liveries. The eastern hillside is Castle Sao Jorge giving great views over the city. Sunset is a good time to be on this hill as the sun sets behind the city 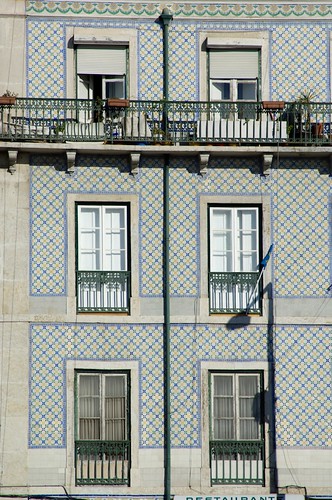 Old tiled houses in Lisbon's back streets by Jason Row Photography, on Flickr

Lisbon was built on a maritime history and the city’s waterfront is another photogenic area. The centre point is Praca do Commerical a huge square with its famous statue of King Joseph on his horse. Nearby ferries leave for the other side of the wide Tagus river, well worth a trip if only for the views back towards the city center. 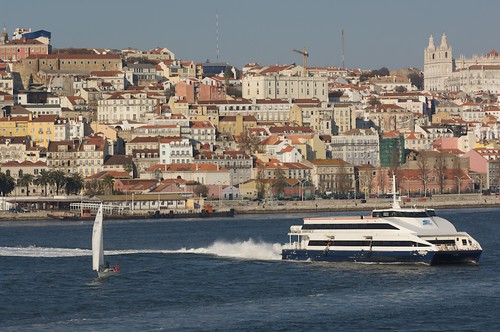 A view of the city from the River Tagus by Jason Row Photography, on Flickr

The Tagus Bridge: One of Lisbon’s most iconic structure is also one of it’s most photogenic. Officially known as the 25 de Abril Bridge it spans the Tagus north to south a few miles west of the city and easily accessible by train and tram. It’s design and indeed color make it appear very similar to the Golden Gate bridge in San Fransisco, and it is just as easy to photograph. The area under the bridge is called Alcantara and is a modern waterfront complex that give unparalleled views for photographers. Be aware to capture the entire bridge you are going to need a pretty wide angle lens. As the bridge spans north to south, it is an ideal location to shoot either at sunrise or sunset. The bridge is well lit and can make for some spectacular golden and blue hour shots. 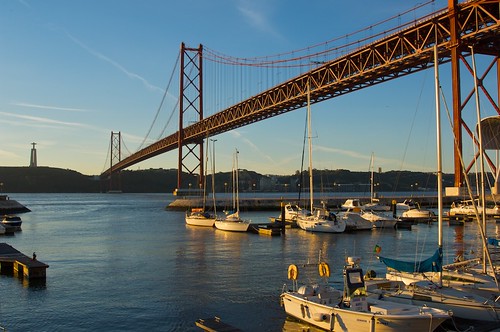 The bridge has many viewpoints by Jason Row Photography, on Flickr 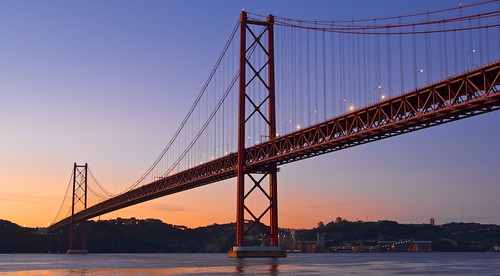 And is beautiful at any time of day by Jason Row Photography, on Flickr

Heading just a few miles further west, you reach the historic Belem. Belem was the launch place for many of Portugal’s great explorers and is rich both in architecture and history. The magnificent statue to the Navigators is rich in details that can be picked off with a telephoto yet also sits in a great location on the banks of the river, perfect for incorporating into a wide angel cityscape shot. Nearby the Museum of Archaeology is a magnificent edifice for the architectural photographers amongst you. This sprawling building is a former monastery rich in gothic details. Another icon of Belem and key subject for photographers is the Belem tower which sits right on the waterfront. As with the bridge the tower is well lit and makes for good golden hour shots. 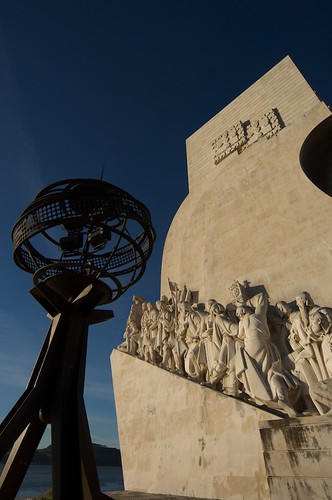 Monument to the Navigators by Jason Row Photography, on Flickr 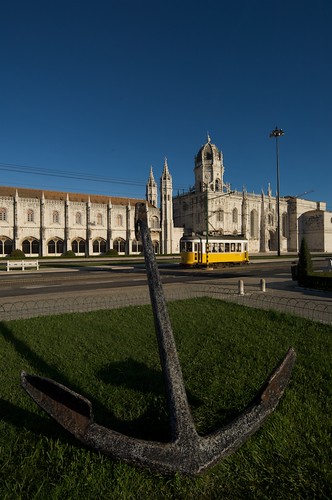 Lisbon is a beautiful, photogenic city, a short article like this can hardly do justice to the sheer amount of photographic subjects this city holds but hopefully these words and images might inspire some of you to take a look for yourself someday.

glad I found this, The Tagus Bridge is now on my list of places to see!

thanks for this, heading there in the summer and making a location shortlist