If you're a beginning photographer, chances are you're still in the process of building up your arsenal of studio lighting. Being able to get the most out of a small lighting setup can be crucial to your photography. For those working with a one or two light setup, Rembrandt lighting can help you achieve professional quality portraits with a minimal amount of equipment.  Named for its frequent appearance in Rembrandt paintings, Rembrandt lighting is a method of studio lighting in which the subjects face is well lit on one side with only a small triangle of light appearing on the opposite cheek, such as in the photograph below. 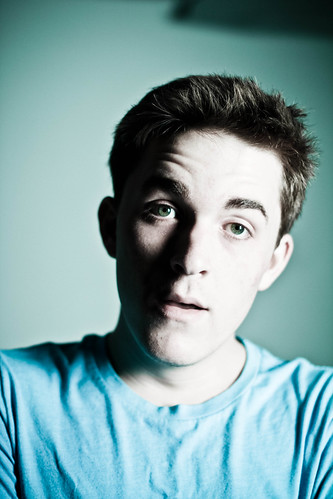 The setup gives a slightly dramatic effect by mixing light with shadows. This effect is often referred to as chiaroscuro, an Italian word that's literal translation is light-dark. Rembrandt lighting is one of the basic lighting setups commonly used in portrait photography and also one of the more frequently mislabeled. It has many similarities with and is often confused for short lighting. Despite being a basic lighting setup, Rembrandt lighting is often done incorrectly. To be true Rembrandt lighting, that very important triangle of light should be about the same width and length of the subjects eye and nose, respectively. While the portrait below is composed and lit well, you can see how the triangle extends past the subjects nose. This mistake is easily remedied by adjusting the distance of your light or reflector to the subjects face.

Now that we know a little about Rembrandt lighting, let's talk about how you set up for it. While some may argue that it's possible to achieve Rembrandt lighting with one light, I find it easiest if you have at least one light and a reflector, though some photographers prefer using two lights and omitting the reflector. It's a matter of personal opinion and what gear you have available to you.

For this example, we're going to be working with one key light and light reflector. We'll start by setting up the key light facing the model at about a 45 degree angle. Put your light on a stand and raise it so that it's just above the models head. Next, we'll set up a reflector, which is serving as a fill light, by placing it on the opposite side of the model. The camera should be placed midway between the fill light and key light. With the model standing so that she is facing the key light, have her rotate her head to look at the camera. If you're unsure whether the light triangle has the correct proportions take a few test shots and adjust from there. I've made up a diagram of the Rembrandt lighting setup that I use in my studio to give you a visual idea of what needs to be where.

If you have two lights readily available and prefer to use them both instead of the reflector, it's important to set the fill light to about half the power as the key light. It's easy to over do it using two lights, since no two types of lights are alike, it's best to experiment with the equipment you are using until you get the results you are looking for. When you find the sweet spots for you light setup, you may want to mark their placement with gaffers tape to make future setups even easier.

Thanks for a very clear explanation. On the surface Rembrandt lighting appears so easy but details about the size and placement of the triangle are often overlooked.

Thank you, very simple and clear guide for starters.

Good work, Rob! You nailed it!

Hello.i am photogerapher in iran
How do you white balance your camera in the studio then you can me the some introduction web site top photo from modell fashion & modeling?
thank you.

You can take a picture of a white or 18% gray card and set the white balance from a photograph. Then select it from your library and you’re done.

I searched for a list of articles on loop lighting and found yours. It is well written and easy to comprehend.

Thank you for sharing.

A short but yet excellent explanation of this technique of lighting.

Surprisingly simple, lucid instructions and just about what is needed is the field practice in the setting of an inside studio. thanks a million.

okay. So. just beginning to play with lighting. I picked up this light/lightstand/umbrella with softbox cover. The bloody lightbulb is gigantic!!!! :-O
Anyway — Want to get down a one-light rembrandt lighting effect. My tries I couldn’t get a shadow, like the light was too bright (had the softbox fabric over it, tho tried once w/o it). It’s like the light is too big??? Does the room/background need to be particularly dark? I couldn’t isolate that triangle at all. Had NO reflector opposite, but a small room w/ a light blue wall opposite. Maybe the light was too big for the small space?? So it washes over the whole face too much? This seemed like such a straightforward, simply approach/setup so really discouraged that I’m having so much trouble… 🙁

My guess is the light blue wall is reflecting too much light on your subjects dark side. Try the black side of a reflector and see if it changes.

Hello and thank you for a well written article. No matter what I do, my triangle is too long or my eyelid is dark. I have deep set hooded eyes and deep set nose to mouth lines. Any suggestions?