As someone who travels constantly as a way a life, I often find myself passing time in airports watching as other travelers pass by and wonder where they're going. Occasionally, I'll see a fellow photographer loaded down with tripods and camera cases and I can't help but smile, not just because I can relate to the pains of trying to carry a ton of equipment through a bustling airport, but I also like to think they are all on some grand adventure and are about ready to take the most important photograph of their career. I'm much too shy to actually speak to any of them, but on a recent trip to Portland it was me–tripod in hand, camera case in tow–that was approached by a curious onlooker. Because we were both boarding the same flight to Dallas, he wondered if  I would be attending the same photography clinic that was bringing him to Texas. I regretfully informed him I wasn't aware of any such thing and as he continued on telling me all about the world of miniature photography–the focus of said clinic–I really wished that I was going. 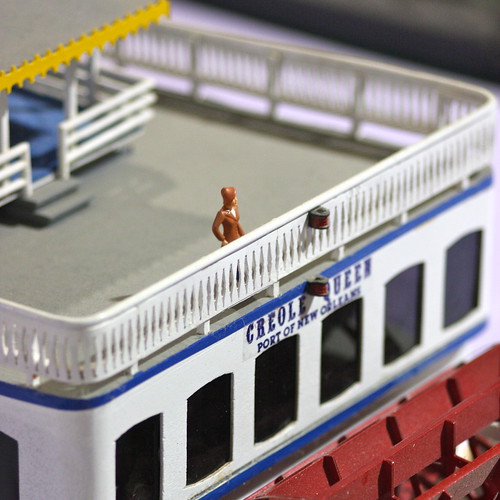 There is an entire sub-genre of photographers that base their craft on the art of photographing miniatures and let me tell you first-hand, these folks take their art very seriously. It's amazing the little worlds that these photographers are able to reproduce in such a realistic way. Check out the work of Michael Paul Smith on his Flickr page, where you can marvel at the hyper-realistic miniature photography and even get some behind the scenes look at his photographic setup.  Smith says he spends time studying the way light falls in real life settings such as parking lots and roadways, then brings what he has observed back to his studio where he tries to recreate the same lighting over his otherwise fictional based town of Elgin, circa 1960's. It's all about the light. 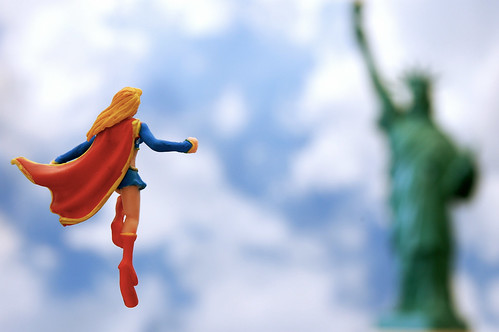 Maid Of Steel / Made Of Copper by JD Hancock, on Flickr

If you're not feeling quite up to the challenge of creating an entire village through dioramas, check out the work of photographer, JD Hancock, who uses ordinary objects and tiny figurines to create visual dialog that is quite out the ordinary.  Hancock has a keen eye for scale and a creative mind that invents some of the most humorous minis found around the interwebs. 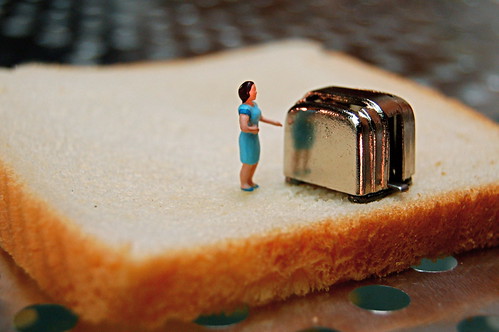 Large Order Of Toast by JD Hancock, on Flickr

His setup could easily be replicated using standard household lighting. And who doesn't enjoy a good super hero portrait series? 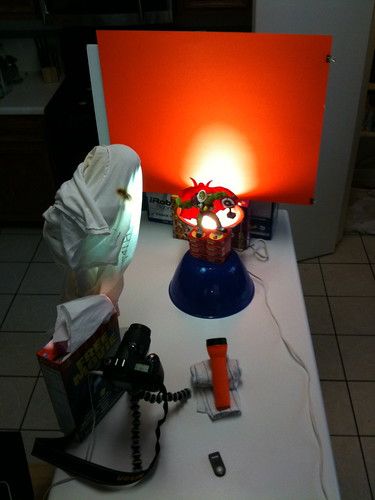 Incredible Future Setup: From Above by JD Hancock, on Flickr

There'a also an award winning documentary available on Netflix Instant Queue worth checking out titled Marwencol that shows how Mark Hogancamp used miniature photography as a means of therapy after he was attacked and put into a brain damaging coma. Unable to afford traditional therapy, Hogancamp started creating a miniature world he calls Marwencol, to help reestablish his hand-eye coordination and help him cope with the mental trauma one is left with after such a traumatic experience. His photographs were so powerful they caught the attention of a popular New York art gallery who now represents Hogancamp.

Now round up some of your kids' toys or dust off those old collectibles, grab a table lamp and get shooting!

Tiffany, thank you for introducing me this product, certainly made me curious 🙂

You are welcome! Be sure to share with us if you try your hand at it! 🙂

Thanks so much for the insight. Do you happen to remember the name of the workshop or the institution where he was taking the clinic in Dallas?

Where do the photographers find these miniatures? Some of them look like antiques.

ebay! Mostly, and keeping an eye out everywhere you go for interesting miniatures.

I’m way late to the game, but I’d love to know the name of the workshop the photographer in the first paragraph was heading to. Thanks.