There's a lot of great aerial photographs and video footage going around lately due to the explosion of GoPros and Quadcopters. But this one really blew us away (hell, we don't even usually cover video, but this is the exception!).

Eric Sterman is a surf photographer from Hawaii and one with some serious talent. This video from Banzai Pipeline in Oahu, is as good as anything we have seen.

Spend a few minutes, put it on full screen and crank up the volume. It's worth it.

Now the photographer, Eric Sterman is also getting a huge amount of attention on social media. If you want to follow him, and who wouldn't, then here's where to start.

Tools Used for This Epic Video

If you want to get in on the action, then here's the gear you're going to need: 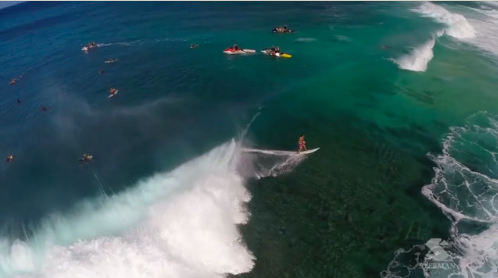 Timely! I’ve just picked up a pair of remote control choppers over the holidays to get used to flying them. We have plans this spring to get a quadcopter and a GoPro and start working in the architectural and heritage field with the equipment. Videos and the work done by Eric here are highly inspirational, thanks for posting this great article!

We do a lot of work documenting heritage sites, with a focus on our local architecture. I’ve thought for quite a while now I’d like to create supplementary videos for our blog posts that take the reader up in the air and around the building for a unique perspective.

I would love to do that. My only problem is I’ve seen too many videos of the copter going down in the water. LOL

Well as someone currently building a quadrocopter I have to say some stuff. First off in Canada or the US, if you use a Quad, RC heli, Airplane, Drone, etc to make money you are likely breaking the law. You need special permits, in some cases a permit for every single time you do it.

Then there is the phantom. Not the best platform. You can build one that can do more than the phantom for less than $600..

If you could point me to a helicopter that can do what the phantom can do for less than $600 I would be extremely grateful. I have been searching high and low and haven’t found anything with a battery life of 20 minutes, 4k resolution camera, all automated flying, and just simple ease of use and safety features.