It all used to be so simple. When DSLRs first appeared, there was very little discussion on sensor size, mainly because there was very little difference in sensor size. The first full frame DSLR came along in 2002 in the form of the Contax N Digital. Priced at $7K it was hardly a success, but it opened the doors to the possibilities of different sensor sizes, to the point that to today, some eleven years on we have a bewildering choice of sensors and megapixels to choose from. Today, we are going to take a brief look at sensor sizes and what they mean to you.

Firstly, lets take a look at what the common sizes are for DSLRs. The easiest way to describe sensor size is by crop factor. This measure by how much the sensor would crop a 35mm film frame. 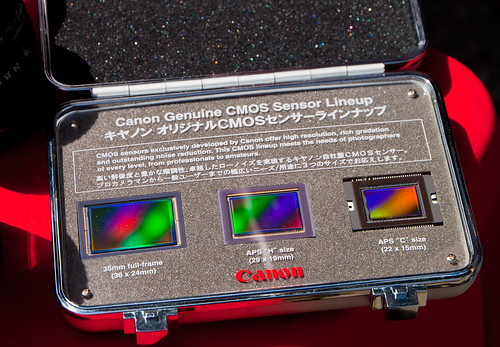 So What is This Crop Factor and Why Does it Affect Me?

Well, despite the many different sensor sizes, manufacturers still define their lenses in relation to a 35mm film camera. So when you see a 24mm lens, it means that it is 24mm on a 35mm or full frame camera. However if you are using a smaller sensor, for example an APS-C camera, you have to add in the crop factor. So when you use that 24mm lens on your 1.5x crop camera it actually gives you the same field of view as a 36mm lens on a full frame camera, however, the perspective, i.e the image compression does not change.

The easiest way to think of it is to take a 36x24cm photographic print and crop it by 1.5x. The perspective of the image will remain the same but you will be seeing a closer crop of the shot. 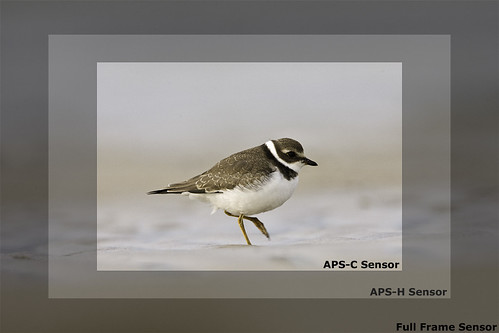 There are advantages and disadvantages to this crop factor.

Firstly the advantages. That long lens you are using, say a 300mm f4, now gives you the equivalent of 450mm on an APS-C camera and 600mm on a 4/3 camera. This is a big advantage for sports and wildlife photographers who can get closer to their subjects without spending huge sums on longer lenses. Whilst the aperture remains the same, the depth of field does change. For example, if you are using a 300mm f2.8 on a 1.5x sensor, your depth of field at 2.8 will be the equivalent of f4.

The other main advantage, is that for lenses designed for full frame cameras, you are only using the center area of that lens, i.e. the sharpest area, meaning that your edges may well be sharper than that of a full frame image.

Lastly, with the smaller sensor sizes, it is possible for manufacturers to produce smaller, more compact lenses, although this does to a certain extent negate the previous advantage.

The big disadvantage of any crop factor comes at the wide angle end of the lens spectrum. Here, your beautiful 14mm wide will now only be giving you an equivalent field of view of a 21mm lens. This can be a big disadvantage to landscape and urban photographers who need that wide field of view. That said, most lens companies do produce specialist wide angles for smaller sensor sizes. 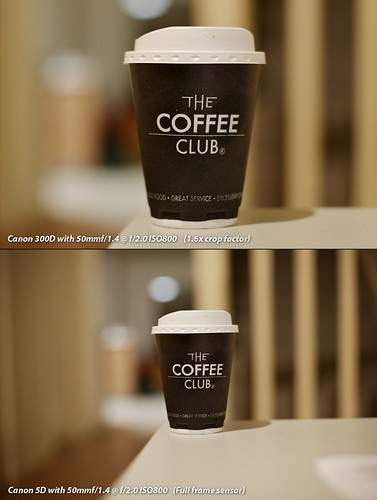 Full Frame Sensor vs 1.6 crop[/url] by Steve Koukoulas, on Flickr

So now we come to the other big issue with sensors – pixel density. Most of us still think of our cameras in terms of megapixels, which is fine, but what you also should consider is how many pixels there are on a given sensor size.

For example, lets take 18mp. 18mp on a full frame sensor will be spaced further apart than those same pixels on an APC-S sensor. On a 4/3”s sensor the pixels will have nearly half the distance between them that the full frame equivalent. This is important because, in its simplest terms, the closer the pixels are packed together, the more likely they are to introduce noise.

Another factor is that larger sensors often have larger pixels. This means not only can they gather more light, but also it gives them an increased tonal range. This in practice means that full frame often offer a higher dynamic range than their smaller sensor cousins.

This is by no means an exhaustive account of the effect of sensor size, there are many factors that can effect the final image quality and only some of those are related to the size of the sensor, the items above are perhaps the most significant.

Thank you that was most interesting!

Is someone aquanted with digitizing a rolleiflex?
IT my first and vaforite camera but as i do’nt use film, i would-be like to instal a 6x6cm sensor or the like. Knows anyone a solution?
I would be gratefull