I think everyone has seen the dreaded red-eye in photos, mostly effecting those with light eyes and animals.  The red eye effect is caused when the camera's flash is very close to the camera lens, most commonly seen with point and shoot cameras, this effect is purely a photographic one and never occurs under normal lighting conditions in nature.  While point and shoot cameras are the most common culpret, DSLR shooters who use the pop-up flash often see similar results.  There are two easy ways to get rid of red eye that all photographers should know how to do. 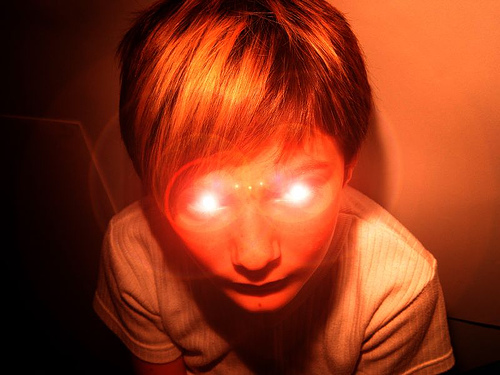 Prevent it before it even happens. By using a hot-shoe mounted flash on your DSLR or better, a flash bracket, you physically move the flash further away from the lens, thus eliminating red-eye from happening.  For you point and shoot users out there, take your camera off auto-flash mode and put it  into anti-red eye mode.  When you do this, tell the people who you are taking photos of that there will be two flashes and the second one is what counts.  Emitting a pre-flash during this mode in the camera drastically helps reduce red eye from occurring.

Fix it after the fact fast. Starting in Photoshop CS2 and getting better with each more current version, a red eye tool has been included.  Simply select this tool and click on the effected red eye and Photoshop will fix it for you.  For particularly bad cases, draw a box around the effected area.  Photoshop does an absolutely stunning job fixing this.  Don't own a copy of Photoshop? Not to worry, Gimp is free and also has a red eye removal tool built in that can be accessed by going to Filters -> Enhance -> Red Eye Removal.

Is it just me that thought that those eyes where pretty cool!