At What Point Does Travel Stalking Become Really Weird?

This is hot off the press and causing quite a (viral) stir, along with several conspiracy theories about the “recreation” part…

But, we're just gonna show you the story as it unfolded, so that you can read about the updates afterward.

What would you do or how would you feel if someone follows you around the world and even more, recreates your images with every bit of detail in it?

When I say every bit, it includes destination, framing, dress, accessories, poses, and even captions. This must be quite disturbing and creepy, yes? 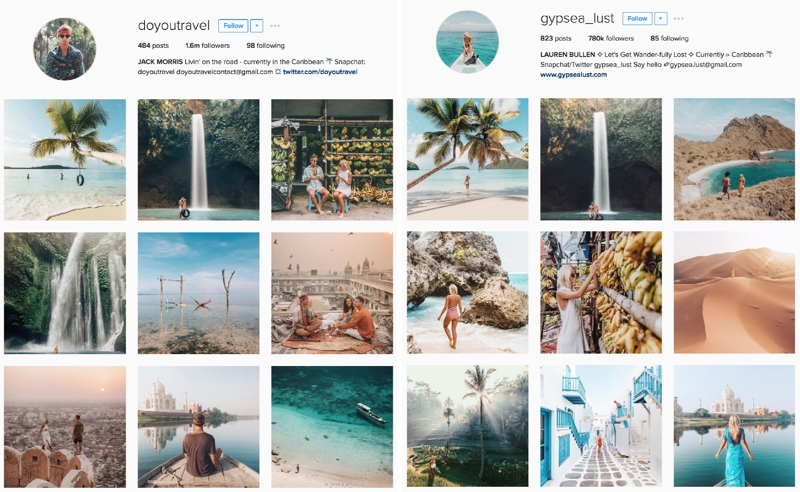 Lauren says, “I was very creeped out and disturbed when I saw the images.”

Lauren Bullen (@gypsea_lust) travels the world with her boyfriend Jack Morris (@doyoutravel). She is a self-taught photographer who posts beautiful pictures of their travel on Instagram.

This couple has been followed creepily by another couple with their Instagram account (@diana_alexa), who not only followed them to their destinations but reproduced their images with so much much detail that even the framing and positioning along with clothes, jewelry and other accessories including the captions have been copied.

Some Background Behind The Couple

Lauren and Jack work for travel companies and other fashion brands to promote their businesses and they create these pictures as part of the business promotion and others.

Lauren also says that she shares her art with the world to inspire and motivate people. They get to stay in expensive accommodations, but for someone to follow them and to take all the effort to research and spend money on these outfits and places is just astonishing.

When you look at the pictures below, you will understand what this means, but it seems that @diana_alexa has made her account private and deleted all the images after the whole copy thing went public. Oops – and now the conspiracy theories roll in…. 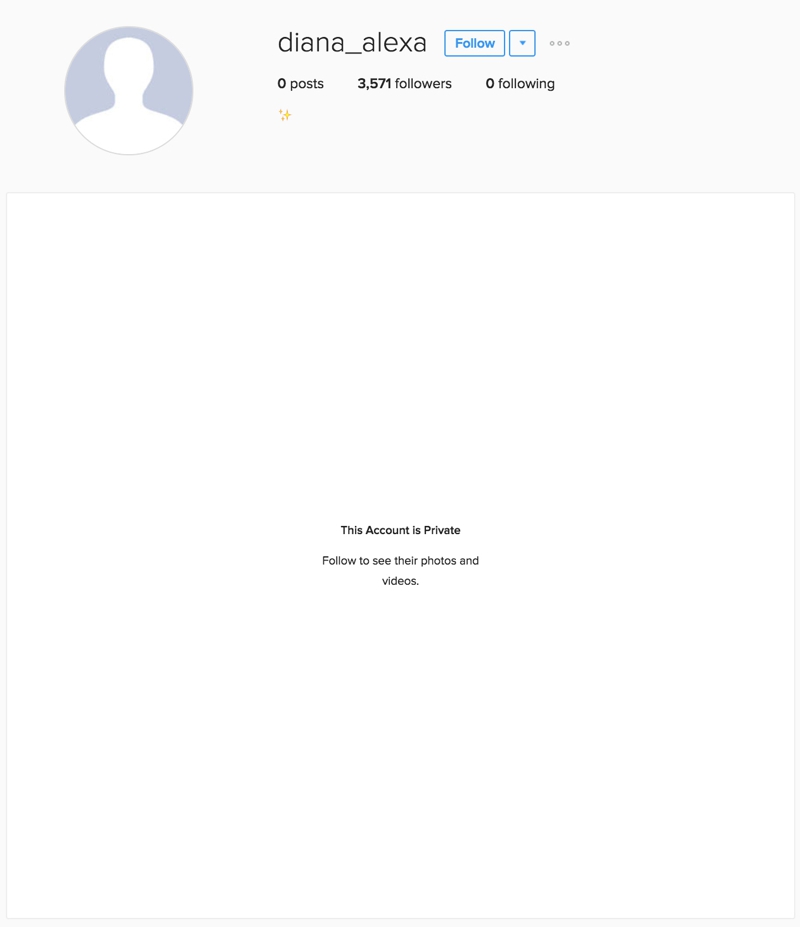 Lauren's Take On This

Lauren has since then contacted the instagrammer Diana (@diana_alexa) as she felt that it was unfair for someone to copy her art as she puts in so much effort into creating these images.

It seems that over the past few days both the Instagrammers have talked about this and sorted out their problems. Diana appears to have apologized and explained herself to Lauren.

There is so much talk about this story at the moment, as the audience believe that this was all started off by Lauren as a publicity stunt, as the media have been overly involved and writing about this.

Lauren makes it clear that she just wanted to share with her followers and to the world her experience on this particular incident.

Lauren has written in her blog that “Having a large Instagram following does come with some interesting experiences, but this has been by far the most odd one yet.” She says it is deeply worrying when someone follows you along, across the globe, recreating your art.

For a moment it makes you think if these were all photoshopped, but when you look at the images side by side, it does appear that Diana has done an incredible job of copying or recreating everything.

So, can you think of how much time, effort and money one would have to put into organizing everything? That would be pretty impressive!

Lauren says, “I don’t promote and tag everything I wear, so that would have taken a lot of time and work, even down to the anklets and necklace. Not to mention the cost of all this- those outfits and accommodations don’t come at a cheap price. A lot of what Jack and I do is work with companies and brands to create imagery & promotion- this is our business and how we are able to continue to create this for everyone.”

Lauren and Jack shared this story and experience with their followers and to the world, to get an idea of what the audience felt about this and most of the responses they've received say that they agree that this is by far the craziest thing that they have ever seen.

There were also the predictable negative responses as everyone is entitled to voice their opinion.

Lauren also says, “And Diana- if that’s even your name, what you’ve done is an art in itself- you’ve caused reaction & I think that’s the point in creating art isn’t it..?”

To read more about how Lauren feels about the whole situation and what she tells, you can have a look at her blog post below

If you wish to look at Lauren's and Jack's work of art, you can see them below on Instagram. 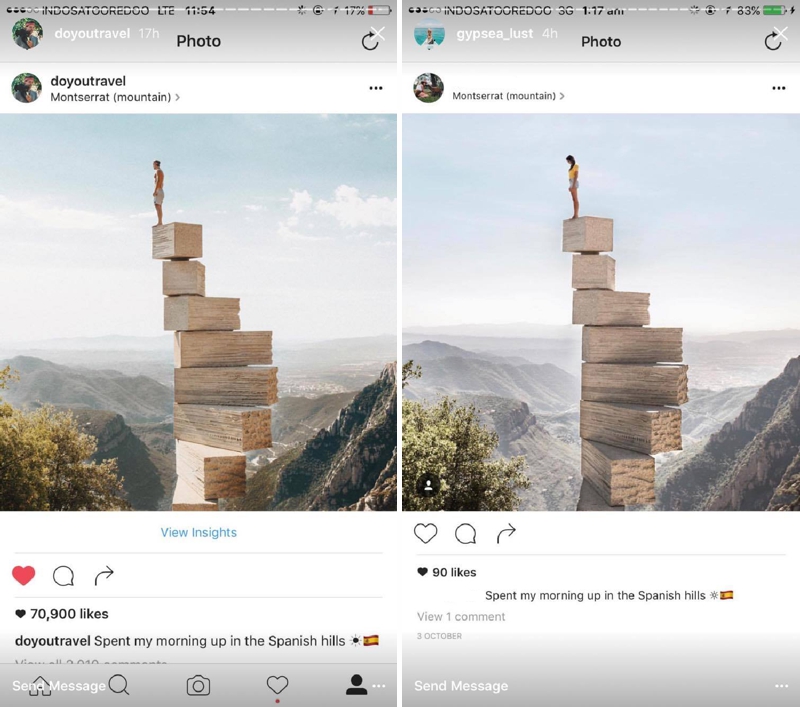 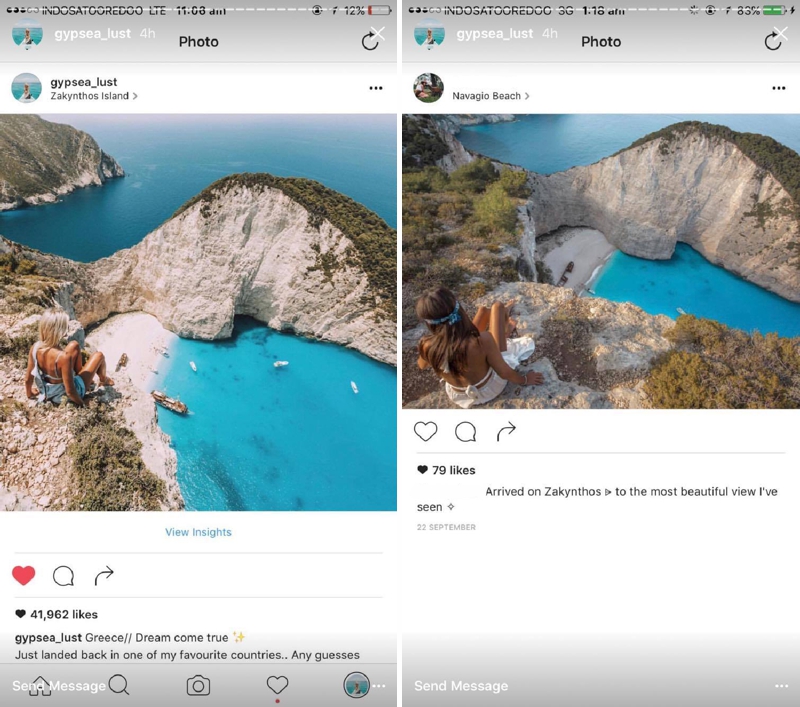 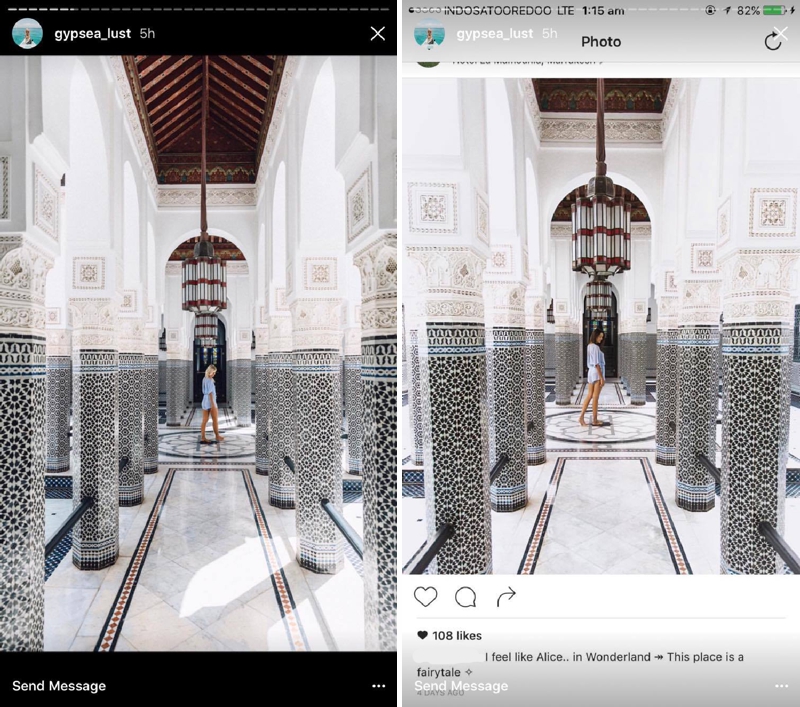 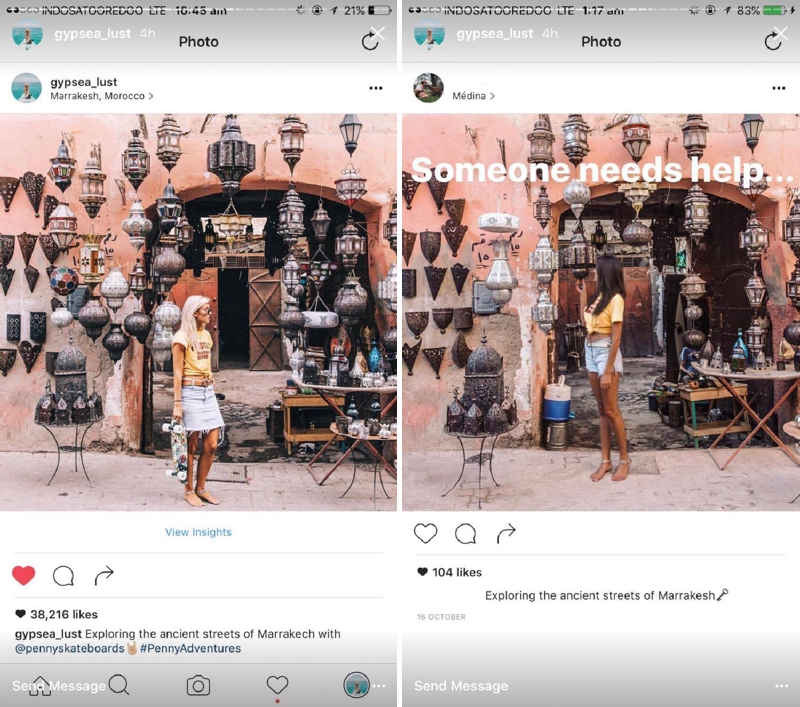 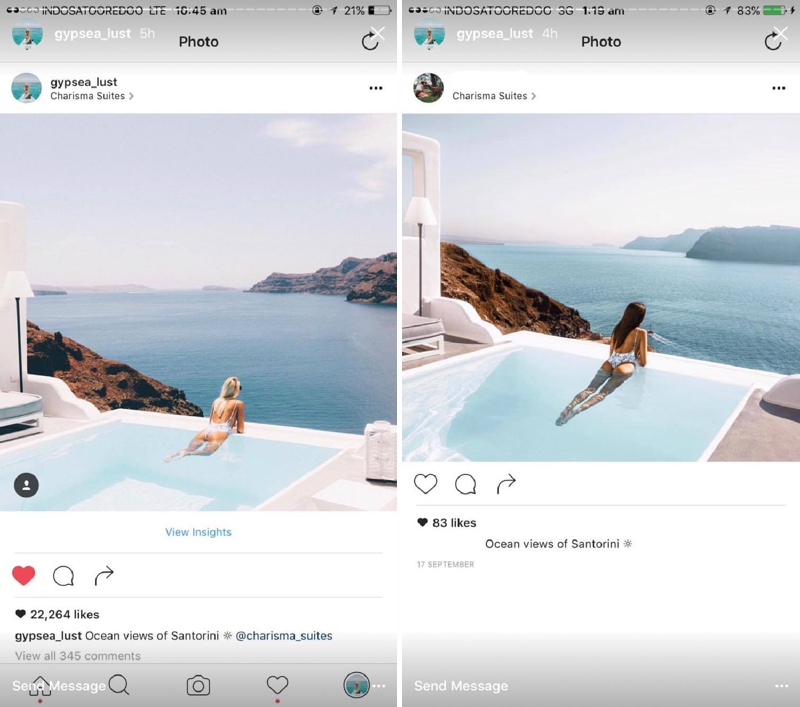 The outfits, the location, the pose and the captions are all the same! :o) 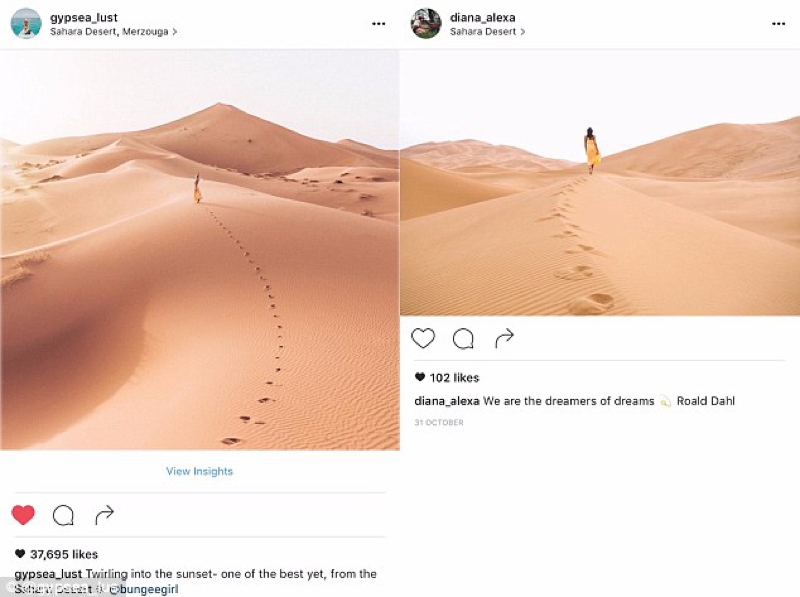 In the above picture, you can see that the location and the outfit are the same with slight change in perspective in the picture 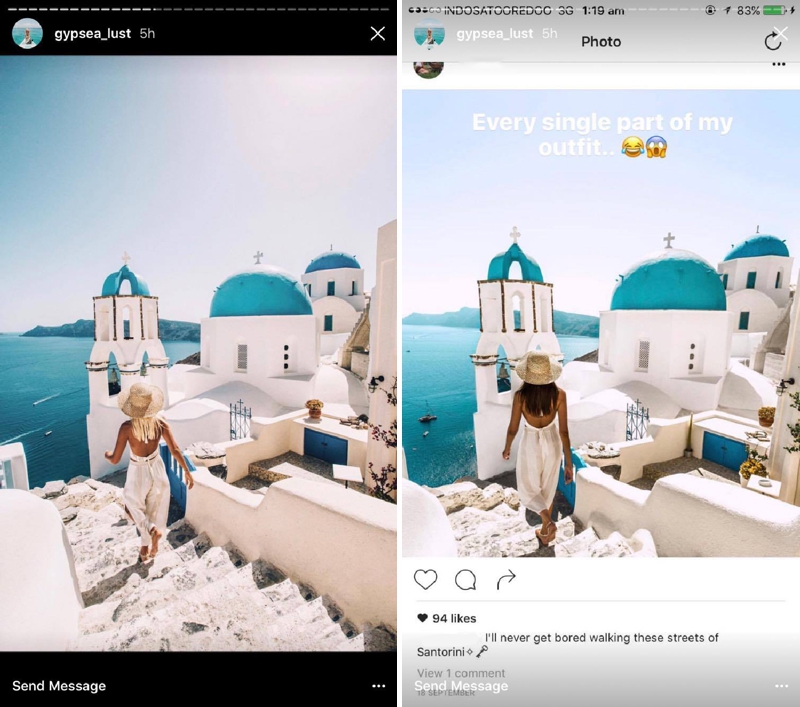 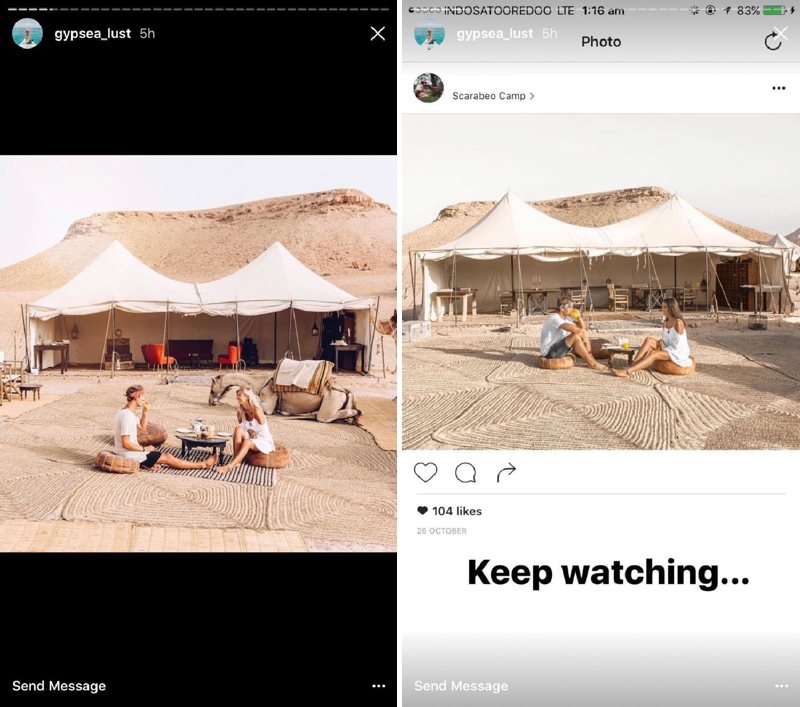 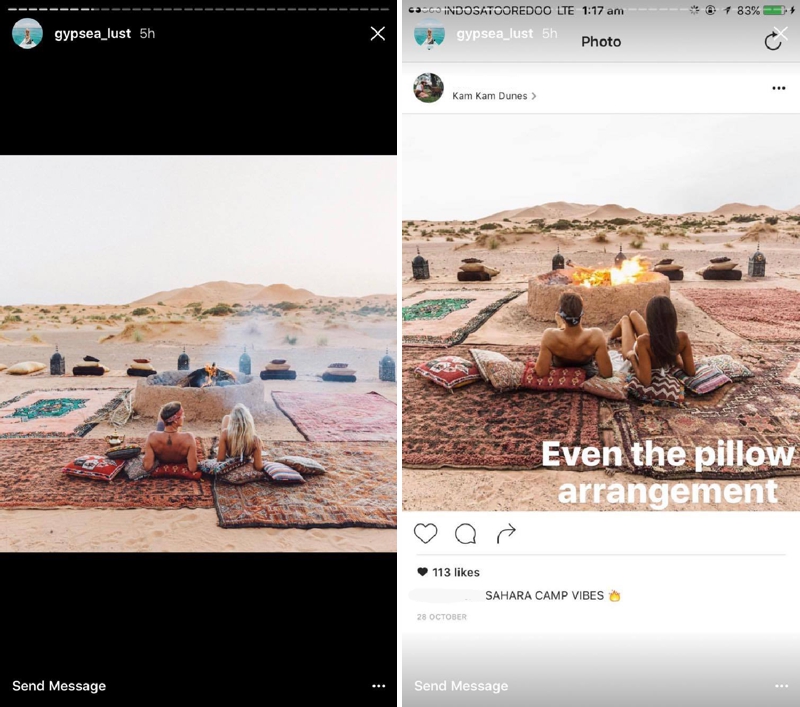 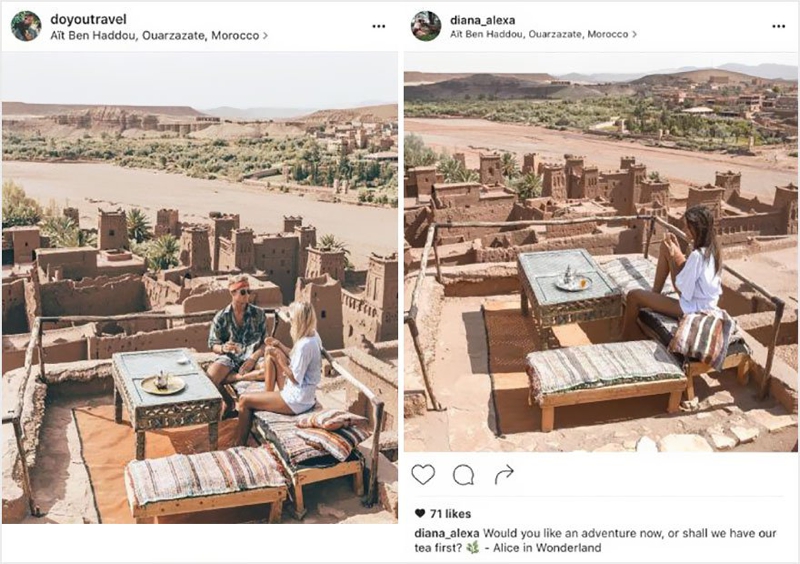 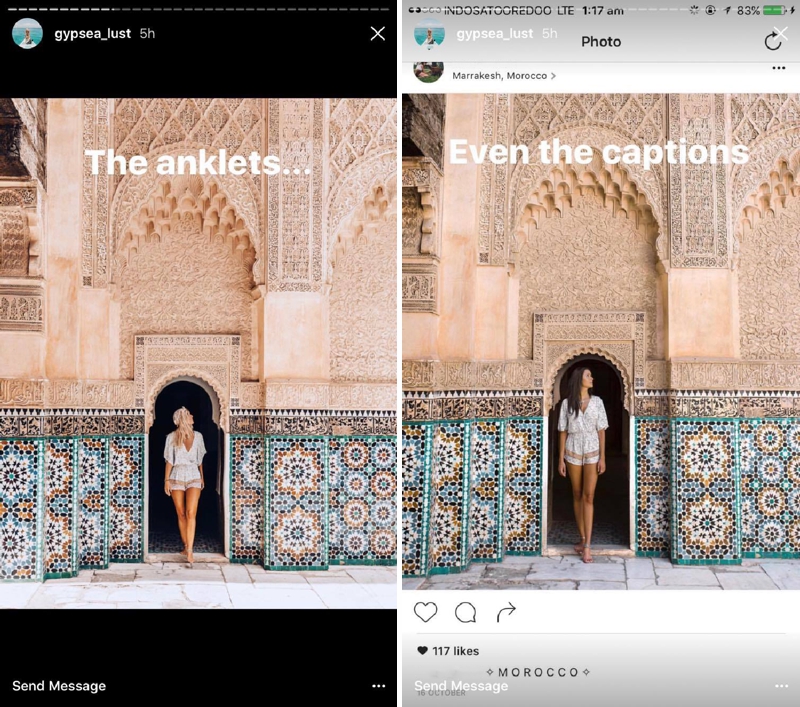 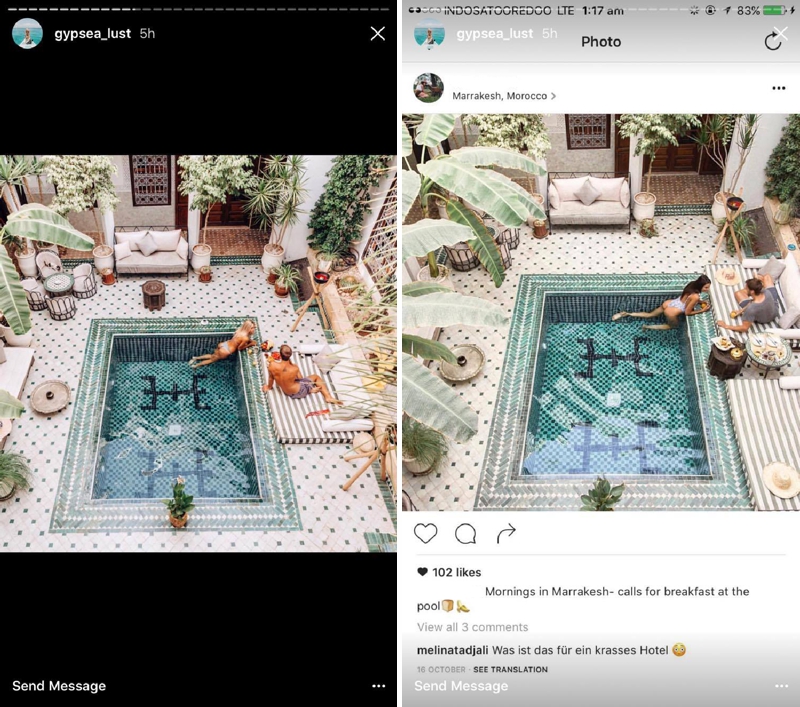 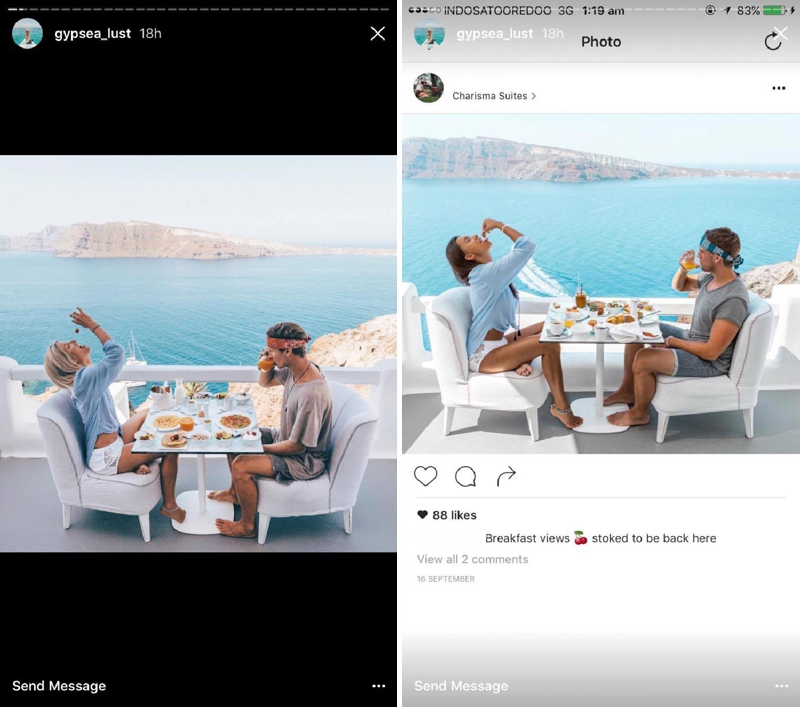 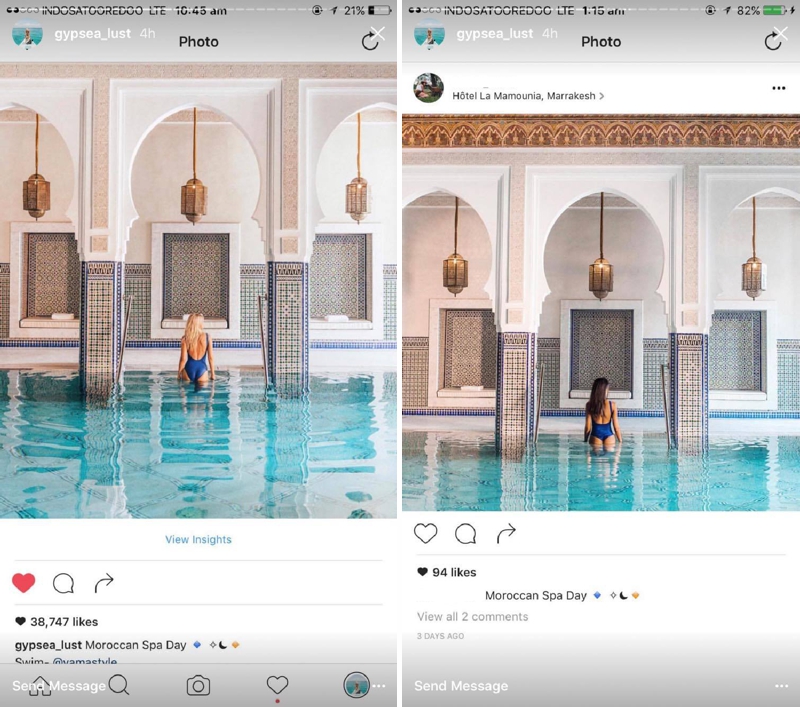 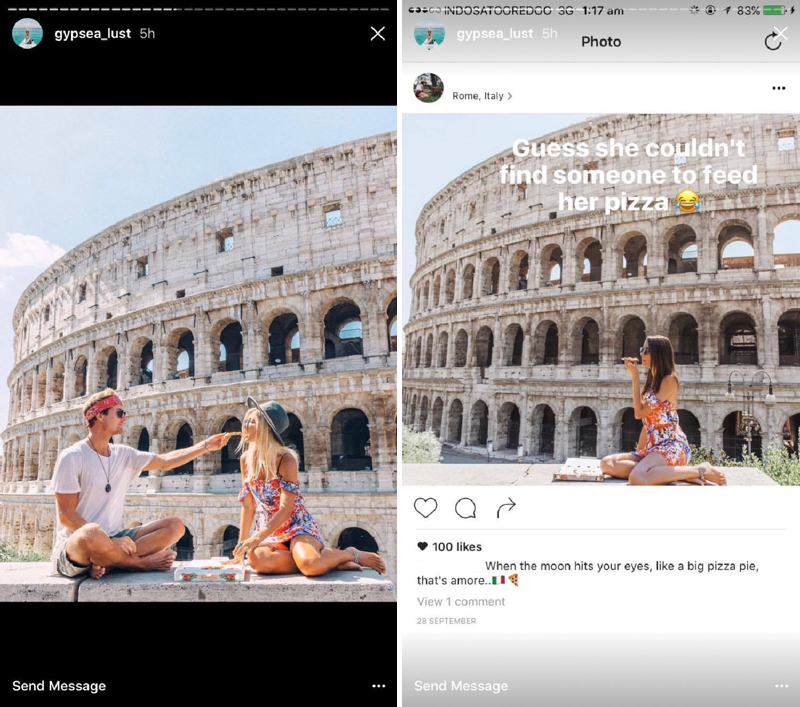 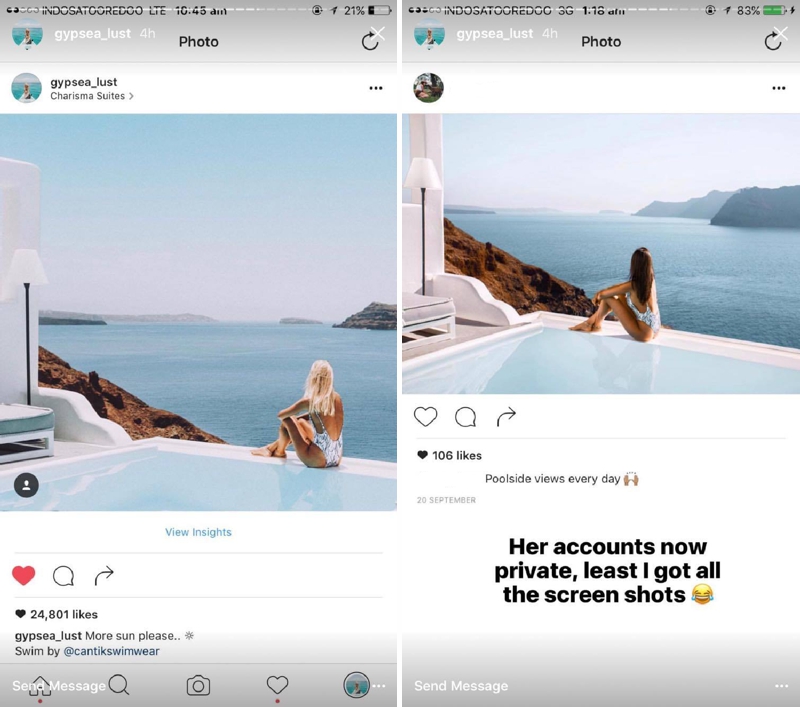 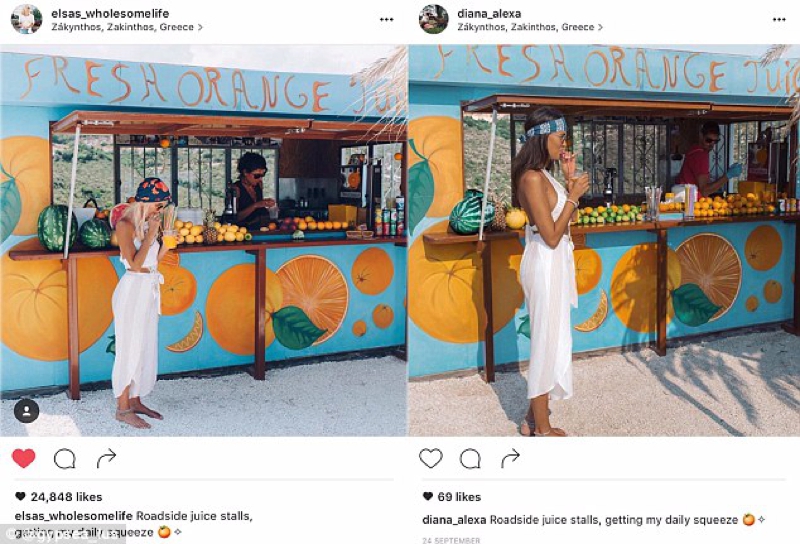 Lauren says that Diana has even used pictures that her friends have tagged her in and recreated them! 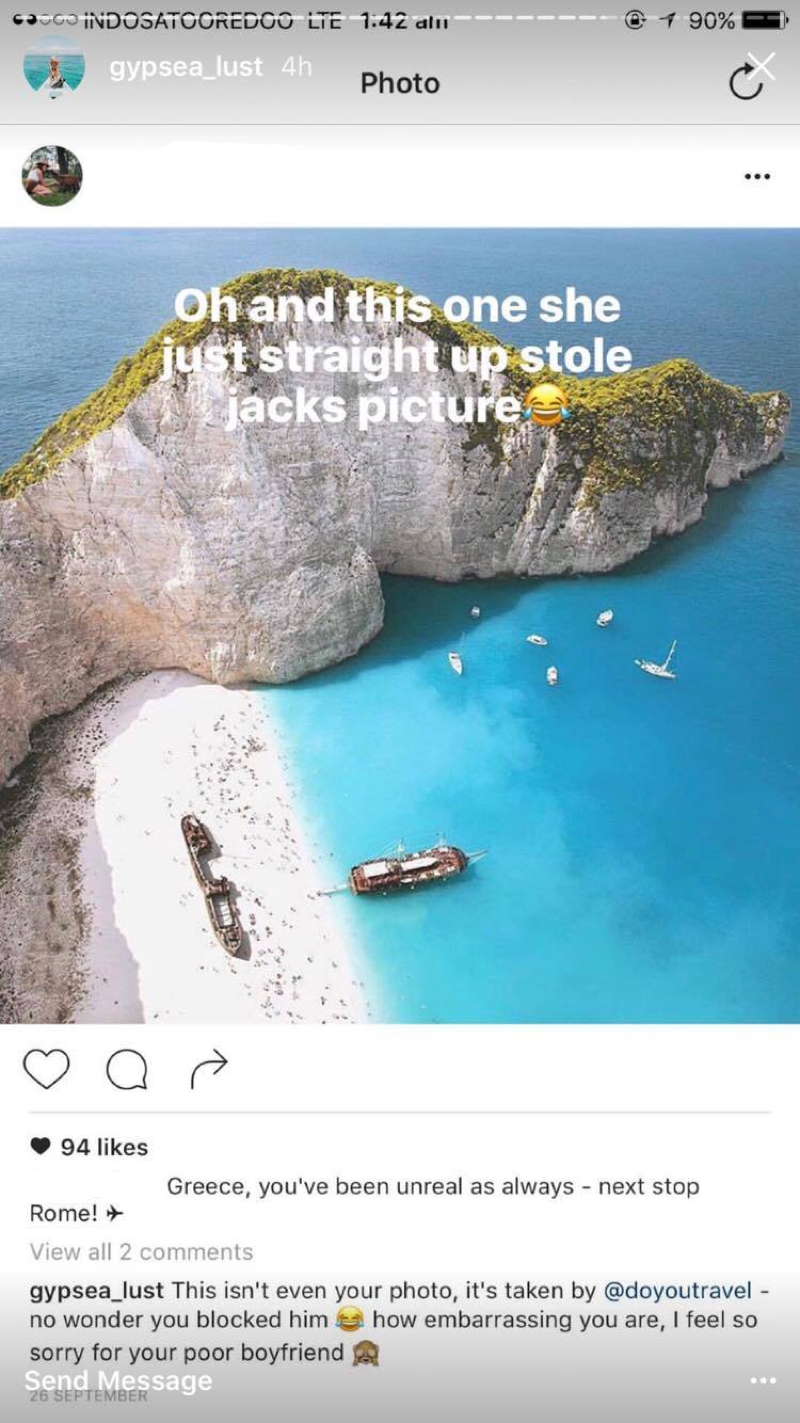 This is very intriguing and an interesting piece I mus say, this hasn't been published without its fair share of skeptics, however. Are these “recreated” Instagram images too good to be true?

One source suggests, probably. It's not surprising there's some suspicion surrounding such a huge story – especially when people are throwing around “photoshopped” accusations, etc!

Whether it is 100% genuine or there's some serious image manipulation going on, it's hot and it's pretty fascinating to understand the scale of social media and the power of the mighty Instagram has as it dominates the online photo-sharing space.

Not to mention, the images are pretty cool to look at – just to see the vast amount of countries these two visit!