Some days after the image went live, we can draw some conclusions about the importance of the photograph itself.

The image is clean and poetic. It has been also described as theatrical, particularly in the comment streams of several online media outlets. The image’s composition is very eloquent, giving a balanced picture in terms of physical weight.

Even though that symmetry is obvious, we still find an intriguing leverage at the end. The absolute serenity of Ieshia Evans, waiting, still, with her eyes closed, to be detained by two police officers illustrates the antithesis of vulnerability.

It is completely moving and compelling. This is the main striking subject plot of the image, but almost immediately we can see a wall of the same invulnerable law enforcers, in contrast to the empty space at Ieshia’s back.

There's also a sub-plot cooking in the still-visible far background. We see many people intrigued by what is happening.

Important Elements In The Image

Let's break down the image a bit. 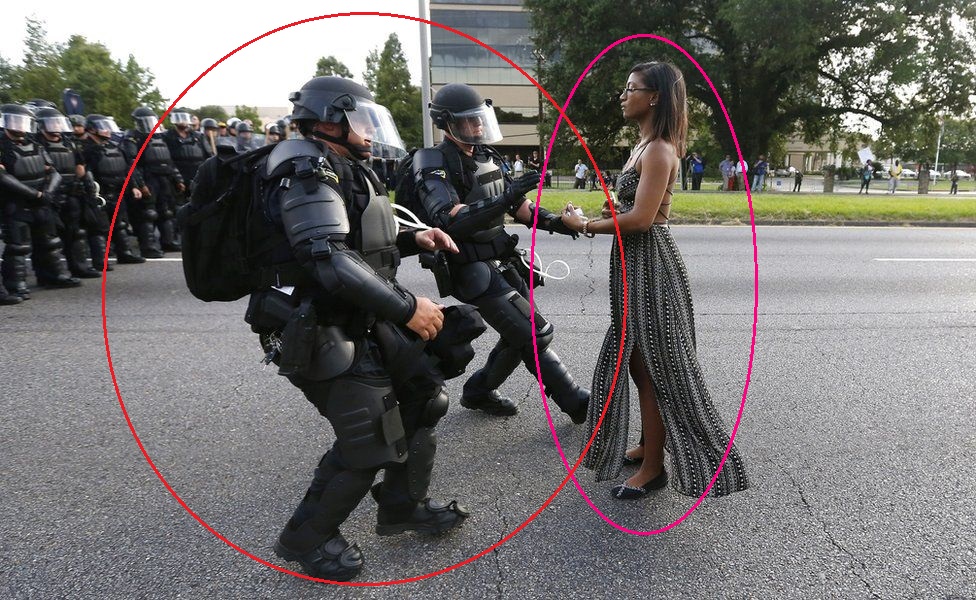 The heavily armored suits of the officers are very intimidating, for sure. And it's the way it should be, since it's a national security thing when it comes to riots.

Still, they contrast tremendously with her light dress, delicately lifted by the wind. And if that isn’t enough, there are two officers about to arrest her, not to mention the whole battalion to the left of the picture.

People In The Rear Distance 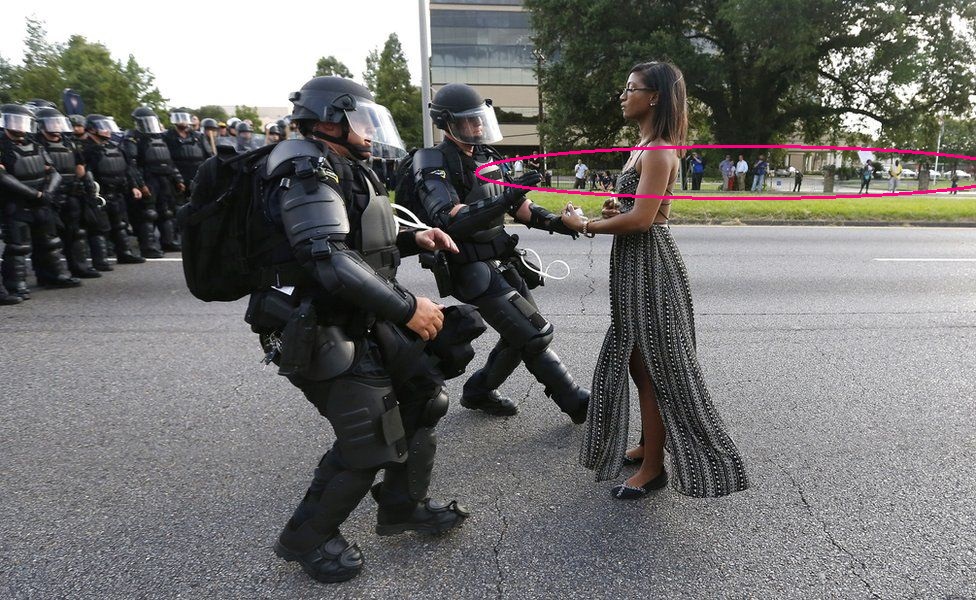 All the people look far off like they are not getting involved, but we don't know this for sure. We can spot some media types and particular people who are moved by the scene and trying to capture what they can from where they are.

People are keeping their distance, but they know something compelling is happening.

The urbanscape tells us about the location and the moment in history, which will be helpful in the future if the image achieves the grade of “iconic”.

Pictures become iconic because of the reactions they evoke and their spread through media, as demanded by people. There might be an anthropological or social algorithm to determine whether an image will achieve “iconic” status, but at this moment in time, the image has been seen by much of the world's population, which is important for a message that must be conveyed in a single image. 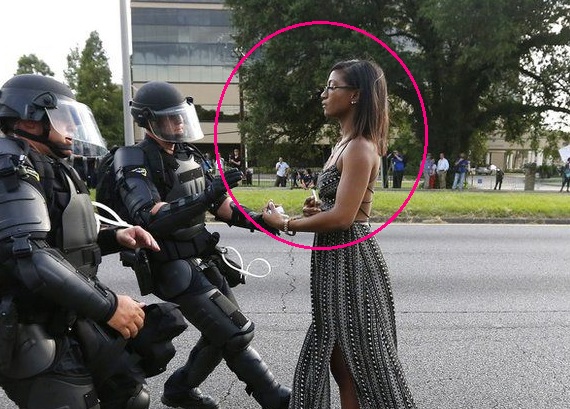 This is the most fascinating part of the image – the serene, calm, strong and confident attitude of Ieshia. She didn’t need a challenging stance to appear completely defiant in the face of the law enforcers. It is almost like she was meditating in peace.

The Expression On The Officers’ Faces 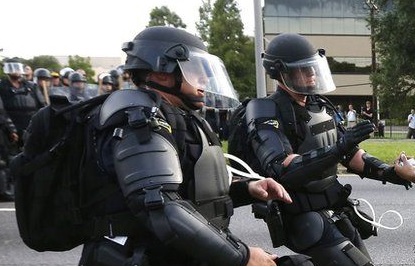 The officers have an expression as well, one which is the complete opposite of Ieshia’s tranquil expression.

The Colors In The Photography

The image has a great color palette, as if it were planned using a color script. This is very important, because it doesn’t bother the viewer with banal distractions; the message punches without losing its strength.

The image was obviously shot at a fast shutter speed, but we still can feel the dynamism and the motion of the moment. We know what is going to happen; we anticipate the clash that’s going to occur in the next still.

A series of murders classified as police brutality in the last week has created an atmosphere of collective social indignation in the United States. This photo captures the moment before the arrest of a protester that has been defined as “peaceful” and “unthreatening”.

The context of the image is important because it summarizes the way people see police brutality worldwide; it’s a strong statement about how regular civilians do not pose a threat that is deserving of death.

The Comparisons Out On The Internet Already

There’s been a rush to define this fantastic and bloodless image as “iconic”. And there has been much noise from the public, comparing it to the following images:

The first thing said by many on the internet was that this image recalls another event that happened on June 4th, when a still-unknown Chinese protester stood in front of a forbidding column of tanks. The contrast between a single man versus a series of tanks is ridiculous, and the image shocked the world.

A more accurate resemblance is the image taken by French photographer Marc Riboud at The Pentagon on October 21, 1967, which shows the early beginnings of the antiwar movement of the time.

This image acted as an icon because of the eerie juxtaposition of a young girl offering a flower to a group of soldiers with their rifles in threatening positions. She got to speak with the soldiers, and they lowered their guns. Things ended peacefully for the girl, unlike the arrest of Ieshia and many others that day.

Somebody mentioned this photograph, which still leaves me speechless. The only thing I can agree in terms of its similarity to the Ieshia shot is that conveys a certain serenity, even if Ieshia’s is just a small and beautiful sprout compared to the image of Thích Quảng Đức’s self-immolation.

Before claiming that something is iconic, the world must take its time. I think it's still too soon to proclaim the Ieshia image as iconic, but is still very important because it summarizes a chain of events that has been worrying the world’s population, even beyond the United States.

For an image to penetrate our mind – at a time when the immediacy of social networks dominates – is no small feat. Therefore, it is worth meditating on its significance for a moment or two.

Thank you for evaluating this photo. It is extremely striking and to me, it is iconic — not just for the current events but for the world in general since 9/11. You have analyzed it beautifully and perfectly!

Thanks a lot for your kind words, it is really an important image for human history.

By naming the girl, she is humanized. By not naming the police officer they are dehumanized.

The cops could be any cops. They wear uniforms for the reason…uniformity. They aren’t meant to stand out when appearing in a group. It’s the same when you’re in the military: your insignia isn’t distinguishable from a distance. You are part of a machine that’s designed with a purpose. You don’t have a name. You have a role. The names of the police don’t matter. Only their purpose. They were there with a goal. Any of them could have stood in for the 2 officers in the picture and it wouldn’t have changed anything.