We all strive for quality in our photography. We invest in more megapixels, bigger sensors and even our time into learning new techniques to ensure our images are as technically perfect as they can be. There is one way to ensure you are getting the very best in image quality, a sensor so large that its height and width would match some mirrorless cameras and a megapixel count that would be through the roof. We are talking about large format film photography of course and today we are going to take a look at exactly what that is.
You might think that large format photography is beyond the reach of most photographers but if you have a good understanding of light and exposure and can frequently make your first shot count, then large format is actually quite accessible.
What is Large Format Film?
Large format film is generally anything from 5×4 inch (102x127mm) and bigger. The largest medium format frame is 6×9 inches so as you can see 5×4 is a significant leap in size. The film is a single sheet rather than a roll and is loaded into a double sided film holder. This obviously needs to be done in complete darkness, either in a darkroom or what’s known as a dark-bag or changing bag – a black cloth sack that has a zip entrance and two elasticated holes in which you place your arms, providing a light tight environment.
Beyond 5×4 film sizes can go to 8×10 inch (20x25cm) 11×14 and up to 16×20 inches. There are also some speciality panoramic film sizes used for, for example, shooting school or college years. 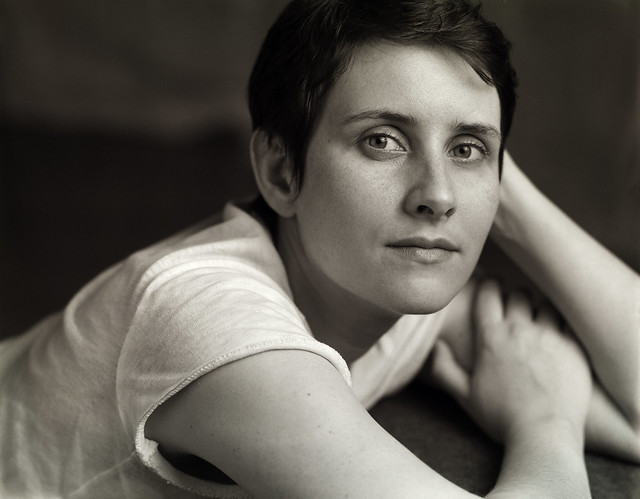 What are the Advantages of Large Format?
Put simply, quality. If you enlarge a 35mm negative or full frame sensor image to 8×10 inches, you are magnifying it 8 times. That magnification carries with it all the blemishes and technical errors such as lack of sharpness and noise or grain through to the final print. When you enlarge a 5×4 negative to 8×10, you are only magnifying the image x2 hence a massive increase in overall quality. Use an 8×10 format film and you are effectively making a contact print, a 1:1 representation of whats on the film.
Other advantages include perspective control, which we will explain in the next section and the fact you are not tied to one type of film, you can have different films in different holders. Also, creating a large format image is a slow and thoughtful process that requires a good degree of preconception. Combine this with the cost of film it becomes a very effective photography trainer.
The Cameras:
Large format cameras generally consist of a front plate connected by a bellows unit to a back plate. The lens is mounted on the front plate and will usually include both an inbuilt shutter/aperture and shutter release. On the rear is a glass focussing screen. Focussing is done via this screen, often with a dark cloth over the photographer’s head to aid viewing. Once focus is achieved the film holder is slotted in, the dark slide, which protects the film from light is removed and and the exposure made. Most film holders are double sided so they can be quickly flipped to get a second exposure.
There are two basic types of large format cameras, the field camera and the monorail camera. Field camera are the more portable of the two and consist of a solid flat bed with two rails. The bellows are attached to the rails and can be wound forwards and backwards to focus the image on the view screen. Field cameras, as the name suggests are relatively portable and can be folded flat for transportation, making them ideal for landscape photographers. 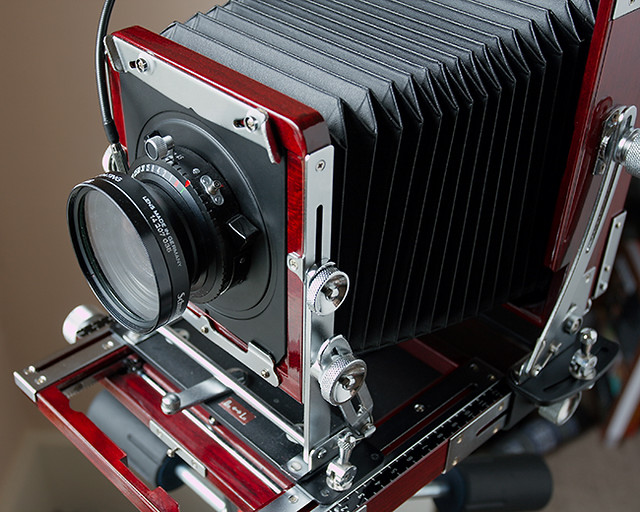 The other main type is the monorail camera. Monorails dispense with the flat base and replace it with a single rail. The front an rear plates are attached to this via universal joints that allow them freedom of movement in three planes. The big advantage of both this and field cameras is that you can change the perspective of the image, much like a perspective control lens on a 35mm camera. This makes them ideal for studio shooting and for architectural photography where fine control of perspective is required. Changing perspective is done by repositioning the plane of either the front or rear plate as needed. Monorails tends to be bulkier than field cameras making them more suitable for studio work. 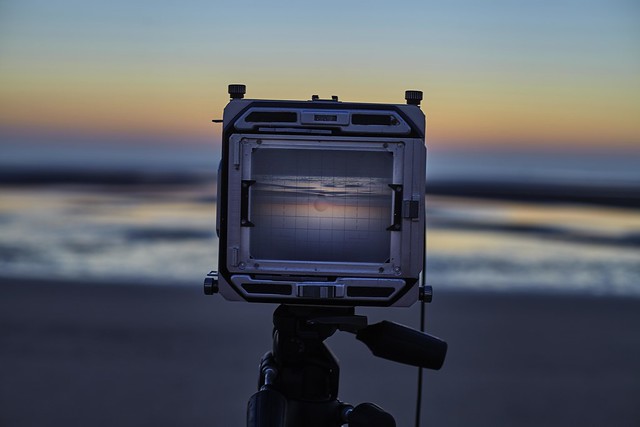 Focussing on a large format camera takes skill and patience. By Mycatkins

Some Disadvantages of Large Format Film:
Whilst the image quality of large format is sublime there are some major hurdles in getting good shots. First the weight of the camera, lenses and film/film holders makes fitness a necessity if you are working outside. A very sturdy, heavy duty tripod is also a must. Focusing and changing perspective on large format screens is an art form itself and take a lot of patience and practice to get right. The film, relative to roll films is also expensive as is processing.
Buying a Large Format Camera.
As I mentioned at the top, large format is not as inaccessible as you might think. The primary expenses are the camera and lens themselves but bought secondhand you can pick these up for the price of a decent DSLR. Whilst the film sheets are expensive, the idea of doing large format film photography in a digital world is to get everything right before you release the shutter – in that respect your return per picture should be much greater than 35mm film. If you have time and want to learn one of the purest forms of photography, large format is a genre you should take a look at.

“The largest medium format frame is 6×9 inches so as you can see 5×4 is a significant leap in size.”

This doesn’t make any sense? Is there a typo there somewhere? 🙂

medium format is shot on 120 or 220 film both are 6 not inches but centimeters in with. With the “standard 6×6 cm. film you get 12 shots. The film has a paper strip to protect the film and the 220 film has no paper protection and therefore can use twice as many shots on one roll of film. using that same 6 cm. width you have cameras that are 8×4.5 cm; 6×6 cn. or 2 and one quarter square inches of negative a great deal more the 35 mm. film (actually 135 mm.) Mamaya makes two studio camera that use a 6x7cm and another that uses 6×9 cm-les shots per roll= les magnification necessary for tht sharp wall shot..A 4×5 is four by five inches of negative space. And yes go to your library and look at the works of Minor White;, Ansel Adams, any of the f 64 club. My 2.8 Roelleiflex takes priceless shots to this day. The large shot of the Takahara does not do justice to the beauty of it’s aged brazillian rosewood-yes I have one and I find that I like the Nikor 135mm. lens is a very good medium format size for the 4×5 very very sharp.

That would be 6×9 centimeters

Yes, it would, my mistake.

As pointed out, there is a small but significant type, 6×9 is of course cm not inches. There is no such thing as 6×9 inch medium format