Lighthouses are a beacon for their role in history. Their many stories inspired painters, writers and photographers who want to share their beauty, mystique and history. They have served as navigational aids for centuries. Lighthouses marked treacherous coastlines, provided safe entries into harbors and sent warnings out to sea.

Initial lighthouses were fires built on hilltops, followed by platforms. Lighting sources were wood, coal, and later oils, kerosene followed by acetylene gas. Lenses were used to direct the light source across the distance. The first Fresnel lens used in a lighthouse was at the Cordouan Lighthouse in France.

The number of operational lighthouses has declined as a result of more efficient navigational systems. However, many structures are still working or are still in tact providing amazing and creative photography opportunities morning, day and night. We'll look at traditional and creative images using edits and angles taken throughout the day. 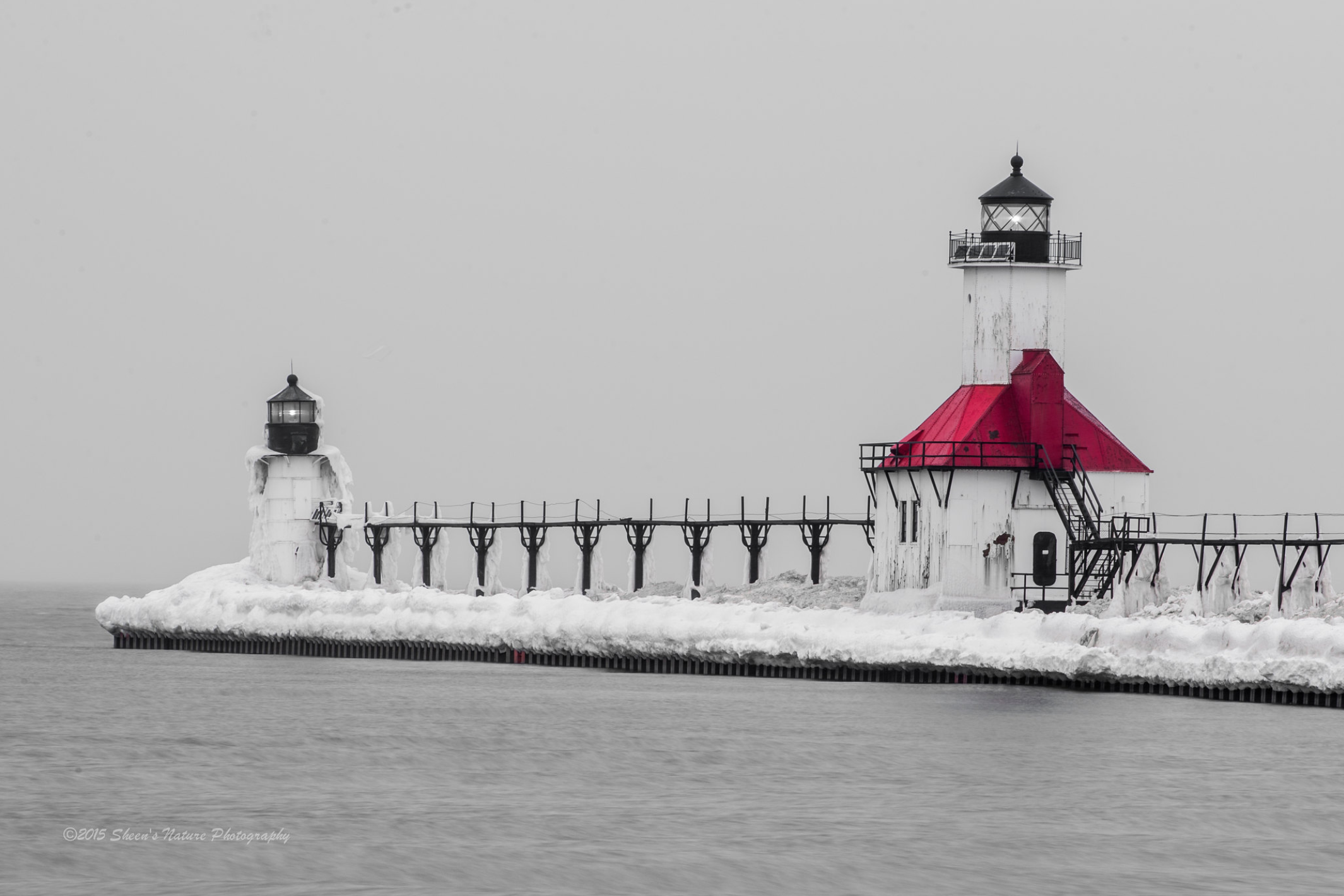 Michigan's Great Lakes harbors more lighthouses than any other state. There are multiple lighthouses in St. Joe's Michigan. The one above was captured in the early morning about the time of sunrise. With the heavy, gray cloud cover, the mood and atmosphere had a somber feel. The only shock of color was the red roof. Editing to the photograph consisted of pulling out the greenish cast on the water. The red roof was adjusted by pushing Lightroom's red luminance slider down to -16.

The second lighthouse in St. Joe's is quite iconic. Known for it's icy sweater, I traveled there in January to photograph it in it's frozen state. Sadly, we experienced the only warm days in January a couple of days prior so the ‘ice sweater' had melted. However, a storm was moving in with heavy winds and high waves. The original image was in color. To convey the stark moment of the ice breaking in each wave, the image was converted to black in white in post processing using Google Nik Collection's Silver Efex Pro. About five minutes after this photo was taken, a larger wave hit which cracked and broke away a ten foot iceberg. Very cool to hear and see that close. 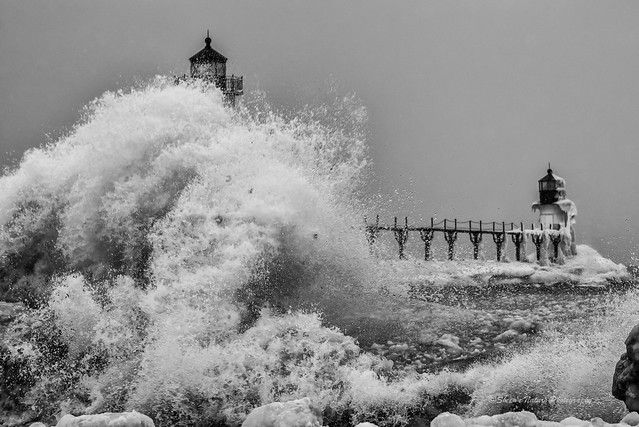 If the lighthouse is open to the public or if you can get permission to enter, the architecture, ironwork, curves and lines provide amazing abstract and traditional opportunities. 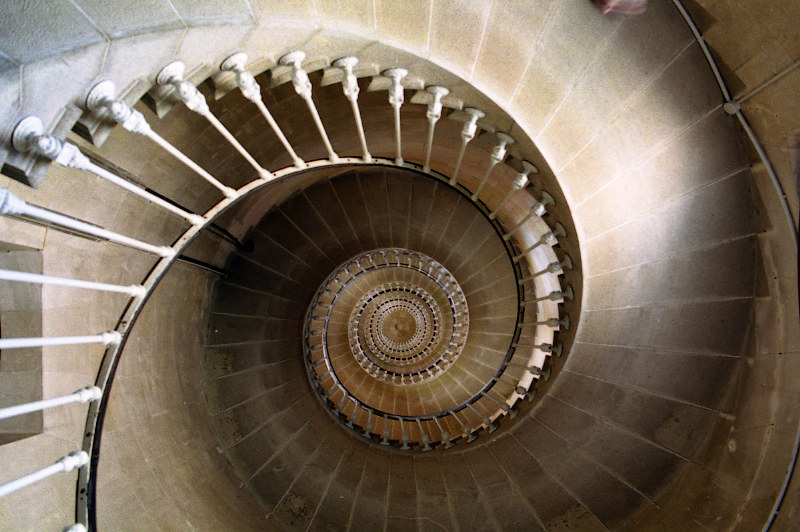 Traditional lighthouse photography using landscapes, beaches, waves while beautiful are expected. Trying a different perspective keeps it interesting for you as the photographer and for the viewer. The Cape Hatteras Lighthouse in the mid morning timeframe reached for the brilliant, cloudless blue sky. Instead of a straight-on wide angle shot, I went horizontal to the ground and took the image looking straight up. The result was a stark, colorful photograph that was fun to take. 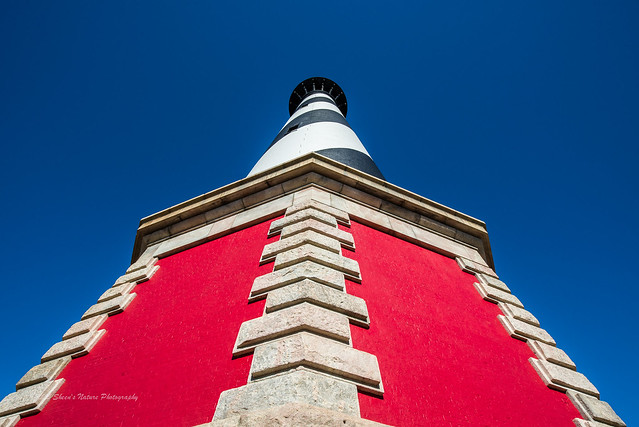 Lighthouses compliment the story without having to take center stage. The beautiful image below illustrates the power of the sea with the important role the lighthouse plays in the distance.

At the point of sunset, the Cape Hatteras Lighthouse shined across the beach onto the Atlantic Ocean. The rich blue hues are intensified by the starburst from the Lighthouse Beacon. 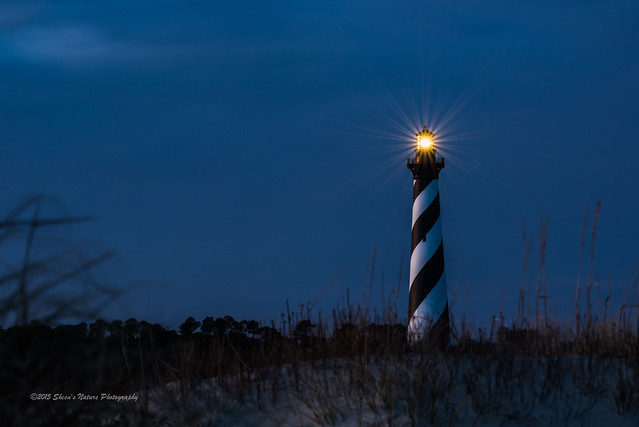 I must confess, this was my first attempt at star photography. Going out with a crew, we went when the moon was setting prior to sunrise. This would increase the odds of photographing star trails and bright star lights. Rising at 3:00 a.m., we arrived at 4:00 in the morning. After adjusting our settings for long exposure for star trails, it was truly hurry up…and wait.

The star trials image was followed by several 30 second exposure shots of the star-dense night. With ISO set at 1600 and focus still set to infinity, the night sky was bursting with stars. 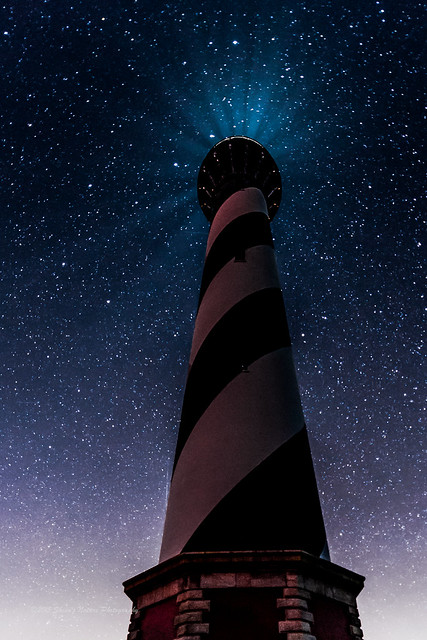 There are over 18,400 lighthouses across the globe. From historical countings, poems, songs (Gordon Lightfoot's, Wreck of the Edmund Fitzgerald) to fictional (or real) stories of ghosts, there's an artistic moment waiting.

In closing, the image below is one of the world's oldest, if not the oldest, longest working lighthouses that is located in Spain. With it's light still gleaming, the structure was supposedly built in the 2nd century. If there is a lighthouse you are interested in seeing or want more history, check out the Lighthouse Directory which provides a listing by country and location. 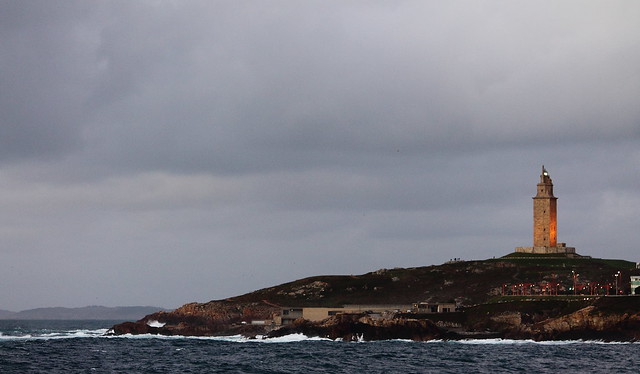