Authors call it writers block, whether there is such term as photographers block or not, I have no idea, but about a year ago, I had it and had it bad. I am fortunate to live in a beautiful city with a host of stunning architecture and great light, yet I found myself less than enthusiastic about photographing it any more. I felt like I had been there, done that, and the T-shirt was so old it had already faded. It was time for a personal project.

I have found that when you are going through the photographic doldrums, at some time or another a project will present itself to you, and so it did for me. On one fruitless evening of photography, my wife and I were returning to our apartment when we came across two street cats. They were so friendly that my wife gave them a little food, and I started to train my camera on them. At first I shot down on them, but then I decided to try and get up close and personal and dropped my bulky frame down to their level. It was only when I had transferred the images to my computer that the genesis of a project formulated in my mind, The Street Cats of Odessa. 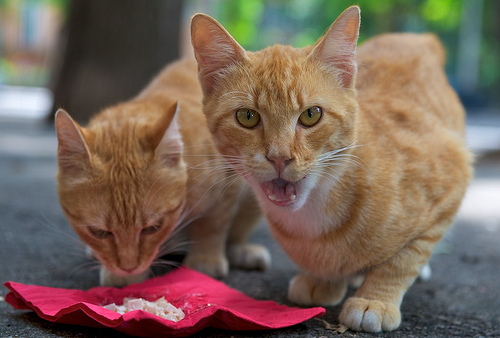 Genesis – The two cats that started it all

My city is home to many thousands of street cats, and my idea was to create almost a documentary of these beautiful animals. In my mind I wanted to convey the cats in their natural environment, ie the streets yet maintaining the cat as the subject. I also decided that I wanted to be up close and personal with the animals and to this end restricted myself to a 24-70mm lens. I was very attracted to the eyes of the cats, so another restriction I set myself was to shoot a wide aperture of 2.8 for shallow depth of field.

It was only once I had started to get into the project that I realized that these restrictions, were not only making it difficult for me to get the picture, but also challenging my skills as a photographer and that was a good thing. Imagine trying to get down to street level within a couple of feet of a wild street cat and trying to get focus on the eyes. After a while I found the best policy was to get close to them, lie down and let their natural curiosity bring them to me.

So there you have it, the story of how two Ukrainian street cats rekindled my passion for photography and allowed me to tell a story at the same time. Now it’s an ongoing thing, no end, no pressure just another theme in my photographic style. The moral of this is that in the darkest hours of your “photographers block” something will come along and relite the fire. The secret is, not to go looking for it.

I know the feeling of “Photographer’s Block”. Great story and essay. These cats are so beautiful, and they’re probably glad you fed them.

I think I’m facing a photo-block too. Lets see what comes my way 🙂

And dogs and cats came to my rescue ! 🙂

unbelievable the cat with the blue and green eye!