As with other recent incarnations of Photoshop, Adobe have released a beta version of their latest image editing software. You can grab yourself a copy from Adobe here If you don’t have one, you will need to register an Adobe account as once installed the software will connect with Adobe via the internet. The beta is an unlimited fully functional version that will only expire once the testing is complete and the final product is released. So what are the headline features in this new version of Photoshop 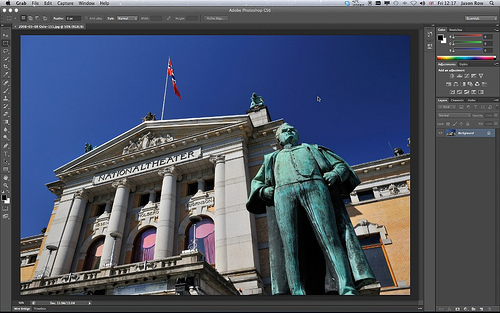 The first thing that will grab your attention is the new “dark” interface. This is radically different than previous versions and in my opinion a welcome change, the images seem easier to look at and adjust out of the darker grey. The interface is also customizable, allowing you to create a look that suits your workflow. Another obvious change for Mac users is that images are now loaded fully in the interface and not as separate windows, although one of the less advertised changes is that it now does not support 32 bit Mac systems anymore, as it is fully 64 bit application. Another, under the hood feature is the introduction of an autosave facility. This will regularly save a version of your image in the background and is invaluable if you have taken the wrong direction whilst editing and have no way back. This is customizable from saving every 5 minutes up to every hour.

One of the headline new features is content-aware patching. Many of us use the patch tool, to remove unwanted elements from an image such as people in the background or dust spots. The new version of this tool adds to Photoshop’s range of content-aware tools first introduced in CS4. The new patch tool allows you to select the unwanted item then drag it into the area you wish to replace it with. The new algorithms blend the surrounding pixels effectively removing the selected item. From my initial tests this is a clever and valuable tool.

Another big change is the crop tool. When activated now, a “rule of thirds” grid is overlaid and instead of the crop moving over the photo, the photo moves under the crop grid. It takes a little getting used to but with a little practice it seems to be more accurate than before. The overlaying grid can also be changed to a variety of different options.

Among the filters, there is the addition of the Adaptive Wide Angle tool. Clicking on this opens the image in a new window not dissimilar to a cut down version of Camera Raw. Here you can make adjustments to correct the distortion effects of extreme wide angle lenses and in panoramic images. Also in the filters gallery is the introduction of three new blur filters, field, iris and tilt. These use the control point system allowing you to easily blur selective regions of your image for a shallow depth of field look. The new oil paint filter does, as it’s name suggest covert your image to the “oil painting” look and features six controls to get the exact style you need.

In CS6, Adobe have also updated Camera Raw to version 7, visually it looks much the same but the the processing engine is now the same as in Lightroom 4 and many of the slider controls have been tweaked to give more accurate adjustments.

There are some welcome additions to the text tools as well. As well as being able to create paragraphs and justifying blocks of text you can now apply character style sheets giving word processor like functionality. There is also the option to paste the Lorem Ipsum quote into a text box as a placeholder, very useful, if you are awaiting copy to be added to an image.

So these are a few of the highlights of the new Photoshop CS6 beta, there are many other new additions and tweaks and as it is an open beta, its well worth downloading to play around with. As it is preproduction software, some things may be changed or added, but as it stands, it appears to be a major and significant update to the seminal image editing software.

I really like the dark interface! I’m really looking forward to checking that out interactively.

Eh, I really don’t care for the dark interface–I’ve used it with elements 6 and found it really distracting. The new crop will take some getting used to, though–how does it handle larger images, especially those with lots of layers–is there a lag? Is it possible to set it to the traditional crop method of dragging the grid? Can we turn off the RoT grid? (I know that’s optional in CS5 ext b/c that’s what I use now). Yes a lot of these will be beneficial, but I feel like it will slow me down at first to have to re-learn a lot of motions and habits in the layout. Thanks for the review!