So you have been taking pictures for some while now, your photography has grown to a point where you feel your camera no longer offers all the facilities that you are capable of using. It’s time to step up to the next level and buy a more advanced camera. In this guide, we are going to take a look at some of the features you may find on a higher level DSLR and how you can make the best use of them.

Spot Metering – Many high end DSLRs feature spot metering in addition to center weighted and matrix. Spot metering can be highly useful for getting the correct exposure on a small part of an overall scene such as a a person’s face when the light is behind them.

Depth of Field Preview – This highly useful and often overlooked button will stop the camera’s lens down to the preset aperture, allowing you to gauge the depth of field, extremely handy for landscape and architectural photographers. 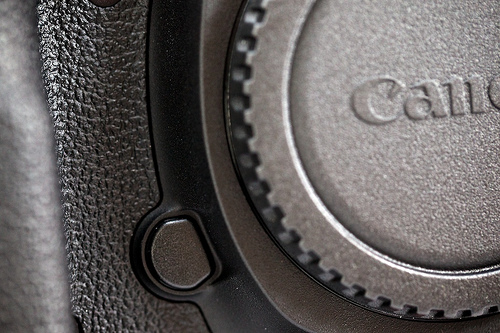 The Depth of Field Button – by The Digital Story, on Flickr

Faster Shooting – The continuous shooting modes on more advanced DSLRs are generally much faster and have a larger buffer than less expensive models. This means not only can you shoot more images per second, but also many more images per burst of shooting, as the camera can store and process these much quicker. The most obvious advantage of this is in sports and wildlife photography.

AF/AE Lock Buttons – These two buttons are excellent functions to use in composition. By holding them down, you can lock either the exposure or the focus to the current scene before recomposing the image.

Programing the Stop Difference – Some cameras allow you to set your exposure steps by either 1/2 stops or 1/3 stops. This can be extremely useful in tough lighting conditions, by setting 1/3rd of a stop you have a finer control over the exposure

Programable Bracketing – Bracketing is a hugely useful part of photography, allowing you to make a range of different exposures. Similar to the above, programable bracketing allows you to select how many images you wish to bracket, often between 3 and 7 as well as the stop difference between the exposures, this is often 1/3rd, 1/2 or 1 full stop. This function is really useful for HDR photography.

Mirror Lock Up – Another under used function on many higher level DSLR’s, mirror lock is designed for use when the camera is on a tripod. Setting this function, locks the mirror up and out of the way of the sensor. The reason for this function is to reduce what is known as mirror slap, which causes camera shake as the mirror swings up. Using mirror lock up is highly recommended for landscape and low light photographers where every inch of sharpness is required.

Dual Card Slots – Some top end cameras feature two memory card slots, this can be an extremely useful feature, as they not only allowing you to shoot more images without changing cards, most have options to shoot RAW on one card and JPeg on another or to write the same image to both cards, giving you an instant back up. 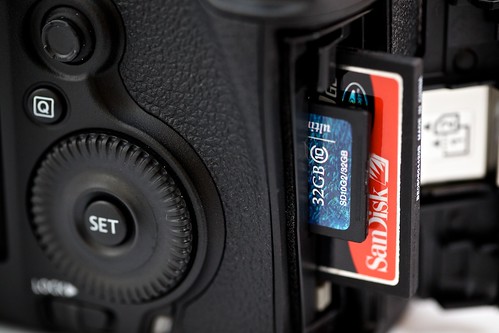 Dual memory card slots – by The Digital Story, on Flickr

Diopter Adjustment – This seemingly minor function can be a huge advantage to people with less than 20/20 vision. It works in a similar way to the right lens adjustment on binoculars, allowing you to adjust the viewfinder’s focus to suit your eyesight.

Full Frame Sensor – Whilst this is not necessarily an advantage over smaller sensor cameras, many of today’s pro level DSLRs are full frame. In practice this means that the camera will probably have lower noise levels than it’s APS sensor contemporaries and possibly a better dynamic range. A downside will be the loss of the crop factor that makes the apparent focal length of lenses around 1.5X longer and that you may have to buy a complete new set of full frame lenses, a serious consideration when factoring in the cost of your new DSLR. 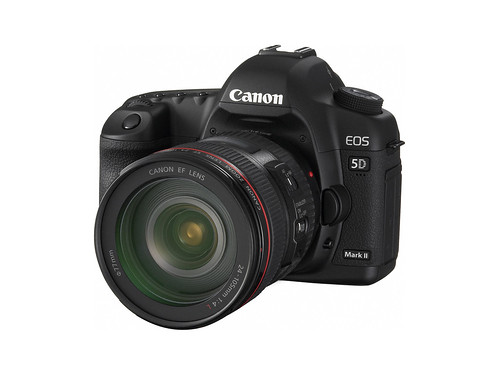 This is not an exhaustive list, many advanced and pro level cameras have other features that can vary brand by brand but if you are in the market for a new higher end DSLR the above functions are well worth looking out for.

You forgot one one the most practical reasons of all:

I’ve killed several $500 P&S because they got just a tiny bit wet in the rain, or fell into – literally – a small puddle of water.

I’ve killed several more because they took a fall they couldn’t recover from.

In contrast, my dSLR keeps on ticking after lots of abuse. No problems.

How about listing their personal list of advanced Dslrs?

My entry level dslr has this features, is this a way to sell ur products, i support canon, coz i own one.

Wow. Can you tell me what ‘entry level’ DSLR you have, as I want one.

Why don’t you try the Canon Rebel T3 i, great value for money and really robust.

Everyone on here that mentioned their “entry level DLSR” has everyone of these functions weather they know how to find them or not is another thing. I have done quite a bit of magazine/ad work with a 7d the only reason I have Full frame cameras is the focusing system seems to be more fined tuned and I squeeze more shots off in RAW burst mode because of the industry I am in and have you seen the 1.6 crop with a 300mm 2.8 it turns the lens to a 480mm compared to the pro bodies which are around 1.2 crop which would make it 380mm.

I own Canon Rebel t2i, it is x1.6 crop, which I don’t mind and it has all the features listed. It is pretty cheap right now than when I bought it. …

The biggest advantage of a DSLR for me (in addition to most of those mentioned) is being able to hold it up to my eye and isolate what I’m shooting. I’m a longtime film SLR shooter, so switching to digital cameras that you have to hold at arms length to use was tough. I find I take more and better pictures by holding the camera to my eye and using the viewfinder to block out everything except what I’m shooting.

For the price advanced DSLR’s have nothing over inroductory. Most all of these features are basic in advanced DSLR cameras except for the full frame. If you are making money then quicker faster cameras are a must. For intoductory DSLR the features are good for years. I love the features in my pro camera but I see no need for them for an amateur unless they plan on advancing to be a pro. Otherwise keep your money and get a T series canon or a nikon D3200 or similar.

Not only that, don’t all DSLR’s have mirror lock up when it’s in “live View”???

I trialled about 5 P&S cameras before flipping the money for a T2i. I was dissapointed with the quality, clarity and composition of each and every P&S I’ve seen in the last 4 years. The last P&S I thought was worth my time was my Canon S2 IS. Even it’s offspring dissapointed.

My D-90 has all but the dual cards and the full frame. At about $1000 it was far cheaper than upper level DSLRs and most photo sites have a wealth of D-90 users compared to other models.

For me it was an Interesting article.
My P&S has every one of the features minus DOF preview.
Full Manual control, manual focus, spot, multi and average metering. AE bracketing (adjustable), Exposure compensation +/- 2 (at 1/3 EV steps), 8fps shooting, and raw capture.
Okay, it doesn’t have dual card slots, it does have ttl external flash ability, remote trigger ability and takes filters for the lens. Lens is 2.8 at the wide end and 5.6 at telephoto end.
It can’t match a dslr for absolute image quality due to the small sensor, but most of the “features” mentioned in the article I have on my camera already.