Manipulation is the brother of creativity. – Michael Michalko

Standing out among the ever-increasing number of photographers is becoming increasingly difficult.  However, doing so is still possible.  The purpose of this article is to give you ideas about how you can do it.

Creativity is the foundation that will enable us to create photographs that are different and unique.  In turn, creativity will allow us to develop a photographic style that will be uniquely ours.

To do so we need to become more creative.  Because creativity is a vast subject, I decided to narrow it down by writing a ‘Creativity Top 12', a list of what I consider to be  the 12 most important aspects of creativity.  Here it is:

1 – Be Interesting – Creativity is necessary to generate the interest of our audience and customers.  We will not generate their interest if we are not creative because people have become blasé about old ideas.  There are so many photographers out there that unless our work stands out as being interesting, different and unique we will not get much attention.

2 – Think Differently – Being creative is about creating new things out of old things.  Taking old ideas that have proven to be effective in the past and re-inventing them by presenting them under a new appearance is the key to doing this successfully.

3 – Bring in the New – Creativity is an input-output, import-export business.  You can't lock yourself in a room and expect to be creative all by yourself.  You have to be in contact with other artists and with other ways of doing things in order to foster creativity.  Think of this as a ‘creative think tank' . The ‘water’ in the tank is the new ideas you bring in.  These new ideas that you bring in push out and replace the ‘old water’ that was previously in the tank.  By doing this regularly you have a constant flow of new ‘water,’ of new ideas.

4 – Get Help – Learn from people who have solved problems similar to the ones you face.  Do not reinvent the wheel.  Instead, learn to use the wheel (metaphorically speaking) by studying with people who know how this is done.  The problem at hand here is how to create photographs that are different from everyone else.

5 – Set Yourself Free – You can’t be creative with your hands tied behind your back, metaphorically speaking.  To unleash your creativity you must cut yourself some slack.  To do so you need to decide what you are willing to do and not do in your work. Don’t be overly conservative.  Instead, push the boundaries and decide to do things you have not tried before or have hesitated doing until now.

6 – Ignore Criticism – Creativity is fostered by self confidence.  You can’t be creative while being concerned with potential criticism at the same time.  In order to bring your creative ideas to life, you have to ignore criticism during the creative phase.  Their will be time to consider criticism later on, if and when it comes your way. 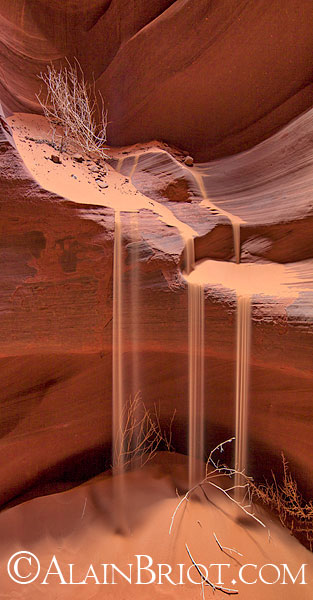 This photograph (above) is a good example of creativity. Instead of using the original 24 x 35mm image format, I stretched the image in Photoshop to make it about 1/3rd taller.  I did this to exaggerate the feeling of sand falling down from the canyon ledge.  This departure from reality allowed me to create a photograph that is different and unique, one that cannot be created by the camera alone.  Other optimization processes were used to make the final image look the way it looks. I will cover how this photograph was created in detail in a future essay on this site. 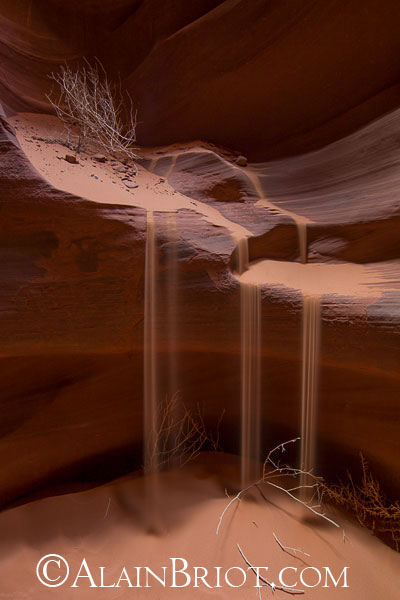 7 – Get What You Need – You need specific resources to give birth to your ideas.  These include classes, tutorials, tools and supplies.

9 – Think Simple – Simple ideas are easier to implement and often more powerful than complicated ideas.  Doing ‘simple' is more difficult than doing ‘complicated.'  This is why most people do things the complicated way. Learning to simplify takes time, but in the end it will save you massive amounts of time.  Saving time is the goal because we can't make more time.  Therefore we need to learn how to use our time in the most efficient manner possible.

11 – Do It – Creativity means creating something, not just thinking of creating something!  This means that eventually you have to step up to the plate and get things done.  Create photographs, make prints, show your work to other people, write essays explaining why and how you do what you do and more.

12 – Defy Authority – There are ‘gurus’ out there that have been around and have achieved more than you have.  Just keep in mind that when they started these ‘gurus’ were in the same position you are in.  They were intimidated by their own, older, ‘gurus.’  They hesitated to do things that had not been proven yet.  However, they succeeded because they did not let those ‘gurus' intimidate them.  They defied authority and decided to do things their way. Do the same.

You can find more information about Alain's work, writings and tutorials as well as subscribe to Alain’s Free Monthly Newsletter on his website at http://www.beautiful-landscape.com. You will receive over 40 essays in PDF format, including chapters from Alain’s books, when you subscribe. You can also email your comments or questions to Alain at [email protected]