These days, we often hear about the benefits of full frame cameras over APS-C, we are told about four thirds sensors and micro four thirds sensors but what does all this mean to us in relation to the way we take pictures? For this article, we are going to leave aside the differences in image quality such as noise and dynamic range because for most enthusiast photographers the difference is very minimal whatever the sensor.

The biggest difference is in what we call the crop factor of the sensor and to begin to understand that we are going to go back in time a little to the days of film.

For many of us that own or have owned a 35mm SLR film camera, the focal length of a lens seems pretty obvious. Focal lengths less than 35mm are wide angled, from 35-70 is considered a standard lens, as it is roughly similar to our own field of view and from 70mm upwards we are into the the telephoto ranges. The thing to keep in mind is that these are what we perceived to the fields of view on a 35mm camera.

The biggest myth to dispel when we come to digital sensors of less than full frame is that the crop factor magnifies the image. This is not true and perhaps the best way to explain it with the use of an image taken on a full frame camera.

Let's assume we have taken our shot on a 24mm lens on our full frame camera. We are now going to take exactly the same shot, with the same 24mm lens on an APS-C sensor camera. Most APS-C sensors have what is known as a 1.5X crop factor, and indeed when you take that same picture, it would appear that the image is indeed magnified, i.e. captured at a focal length of 24 x 1.5 =  36mm. However what we are going to do now is take our full frame image and crop into so that we get the same size as the output of an APS-C sensor. Now if you compare the cropped image to that of the the photo from the APS-C sensor, you will see that they are identical. The magnification is exactly the same but the image has a narrower field of view, in other words, compared to full frame, it is cropped. 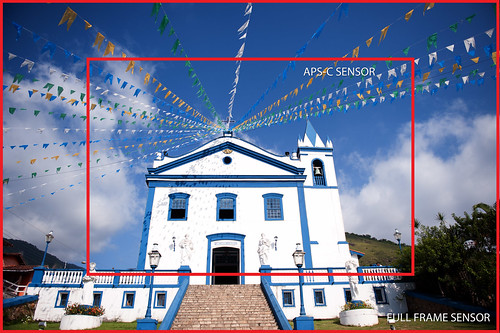 So with this in mind, how does this relate to us in real life photography. Well let’s take a look at the most common forms of cameras that we enthusiasts use.

These are commonly found on modern mirrorless cameras and feature a sensor that is approximately 17.3mm x 13mm giving a crop factor of 1.8 to 2 depending on the actual sensor and camera. The end result is that a 50mm lens on a camera with a 2X crop factor would give the same field of view as a 100mm lens on a full frame camera

This is the most common sensor size for modern DSLR’s and there are actually a range of slightly different sized sensors that fall into this category. Canon’s APS-C sensors tens to have a crop factor of around 1.6x whilst Nikon’s sensors are very slightly bigger giving a crop factor of 1.5x. Using a 50mm lens on a Nikon APS-C camera would give you the equivalent filed of view of a 75mm lens on a full frame camera. 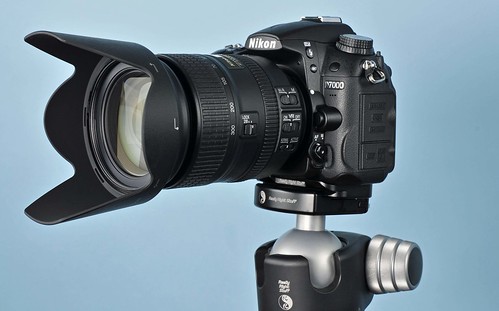 Depth of Field: How the Crop Factor Affects It

The other big thing to know about crop factor is that the smaller the sensor, the greater the depth of field for a given aperture. Now the maths behind this is all very complicated, but the simplest way to explain it is to go back to our shot taken with the 24mm on the full frame camera. If we wanted to replicated the same image with our APS-C camera, we would have to move further back from the subject. As we move further back, our depth of field, for the same aperture, increases.

The crop factor in digital photography, is something that we should all be aware of, but not worry too much about. Ultimately if you have an APS-C camera the most important thing to remember is that your 200mm lens is giving the equivalent view of a 300mm lens, not the equivalent magnification.

Great article, yet, regardless of the sensor size, you still must move around and find the shot. 🙂

Two questions then, as I have a Canon 5D2 and a 650D and I don’t use EF-S lenses. My lenses are therefore all fully interchangeable. ( Mostly L lenses )

1) Would it be better to shoot full frame and crop to a 1.6 size or just shoot with the crop frame camera. I ask this because there is little difference in IQ under normal lighting conditions

2) I am planning a weekend wildlife safari in May and was thinking about the matching of cameras and lenses whilst on the viewing vehicle with limited space . I thought I would put my 100-400 on the 650D and my 24-105 on the 5d2. That way I would get the maximum field of view using the 24-105 and slightly more reliable focussing and “reach” on the 650D ( I know it is not real reach) . I don’t want to be changing lenses in the dust and the limited space, also for speedy reaction time to situations and opportunities as they arise. Also as the light fades, I might have to switch over due to the 5D2’s better low light capabilities.

So you can see the 2 questions run into each other and I would appreciate your comments.

My experience with the T3i (which I believe is the 600D equivalent) is that lenses focus much slower, especially in low light, than the 5D or 60D – so I’d figure that would be the case with the 5DII. I’d put the bigger lens on the 5DII.

A great explanation for field of view and sensor size. I have also seen a video where it is demonstrated that when looking at Bokeh vs Aperture the aperture for only amount Bokeh needs to also be multiplied by the crop factor. For example a prime 100mm f/2 lens on a apsc sensor set to f/2 will produce the same/closest approximation of bokeh on a full frame sensor with same lens and focal length at apprximately f/3.2.

The flaw in your argument if not worrying about crop factor is the Los if wide angle views with the lenses being sold. A 24mm lens on a full frame camera is a nice wide angle, but becomes isles for wide angle on a 2x crop. Do v if you do a lot of landscapes, our tight spaces, you must go full frame or at least a 1.5 crop.

great article! Finally someone is explaining that it’s the distance to the subject that effects depth of field and not sensor size in and of itself. You may want to change that first sentence under “depth of field and how crop factor affects it. “. It’s true but in accurate.

Great article. Would be good to mention using eg. 50mm 1.4 budget lens as a good quality replacement for 85mm – on a practical note. Also the fact that you only use the centre of the lens and crop out lots of the distortions and vignetting.