But there are those who have to admit some degree of feature ignorance. It’s not totally your fault; today’s digital cameras are bursting at the seams with so many bells and whistles and many photographers just aren’t going to go exploring the murky depths of their camera’s menu system looking for some feature they may or may not use regularly. This is a simple matter of functional pragmatism — as long as your camera does what you need it to do (and does it well), you’re content. It’s a philosophy I wholeheartedly subscribe to.

But there’s also great value in exploration. Go poking around your camera’s menus and you’re sure to find some useful feature that you didn’t previously know was there or hadn’t ever given much thought to. Sure, some features are nothing more than gimmicks; but there are some little used features that could be just the thing you need in a challenging situation, or to achieve a desired effect, or to simply make your life a little bit easier. You won’t use them every time you pick up your camera, but you’ll have the peace of mind of knowing they’re there when you want or need them.

Here are 6 “hidden” camera features you will be glad to discover. 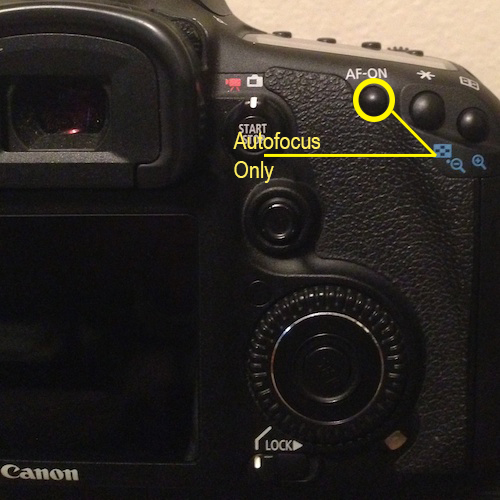 If you learned to use your DSLR in standard fashion, then you’ve mastered the process of pressing the shutter button halfway to initiate autofocus and pressing it fully to take the shot. It works well enough and I’ve never heard anyone complain about the process. But there’s another way — perhaps a better way.

With back button focus, you take away the task of focusing from the shutter button and assign it to a button on the rear of your camera, typically the AF-ON/AF-L button or * button.

The advantages of back button focus include reducing (or eliminating) the need to switch your lens to manual focus, easily maintaining continuous focus, and improved stability as you don’t need to half-press anything. You use your thumb to engage and maintain focus while using your index finger to fire off a shot. It may sound unimpressive and it takes some getting used to, but once you become accustomed to back button focus you might never return to the old way.

While not all cameras have a dedicated AF button, virtually any DSLR can be customized to use back button focus. Have a look at this tutorial to learn more about back button focus and how to set it up on your camera. 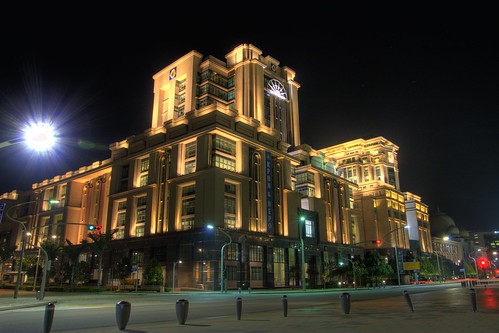 Roaring debates about the aesthetic qualities of HDR are pointless — you either like it or you don’t. If you don’t, then don’t bother making HDR images. If you do, and you’ve got a relatively recent model DSLR (such as Nikon’s D800 and D600 or Canon’s 5D Mark 3 and 6D), then you’ve got a built-in HDR feature that could certainly come through in a pinch or give you a way to experiment with the look. In-camera HDR won’t do a better job (at least not yet) than post-processing software, but having the capability right at your at your fingertips at all times could prove useful some photographers. 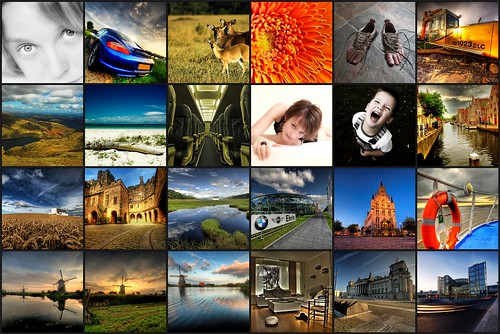 If you're one who regularly applies ratings (on a 5-star scale, for example) to your images, you should be excited to know that you don't have to wait until you transfer your images to Lightroom or whatever software you use to rate your shots; you can do this in-camera. Additionally, the rating you apply in-camera is retained and used by your post processing software, so you don't have to go through the rating process twice.

Why rate your images in the first place? Different people have different reasons; it could be part of a custom organization scheme or the first layer in a self-critiquing process, or you could allow clients to have a look at the images and rate their favorites. No matter the specifics, you'll probably enjoy the utility of in-camera ratings. 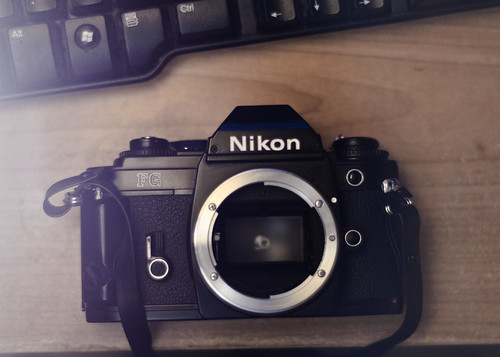 Much to my surprise, I've encountered what I consider to be an inordinate number of DSLR owners that don't realize their camera has a mirror lock up feature. 35mm film cameras commonly made this feature available via a switch of some kind located on the camera body; the feature is still available in the digital age, but you'll have to go into your camera's menu to activate it. If you desire an additional measure of stability (to avoid camera shake) then you probably won't mind taking a trip through a few menu levels. 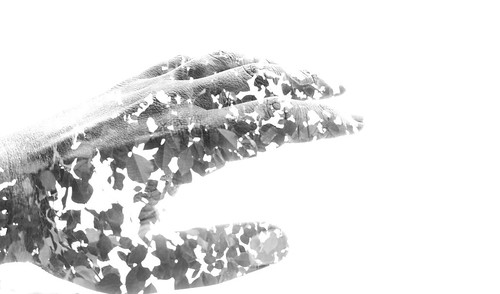 Another sort of film camera “throwback” feature is the ability to do in-camera double exposures. Allowing the photographer to expose two images on one frame, the double exposure feature is more commonly found in point-and-shoot cameras as opposed to DSLRs (my Lumix LX7 has this ability but neither of my Canon DSLRs do), but there are a few DSLRs that sport in-camera double exposures (a number of Pentax and Olympus models, a few Nikon models, and only a couple of Canon models). Much like in-camera HDR, you might be better served doing double exposures in Photoshop or similar software — or not. The ability to do them in-camera lets you experiment on the fly, and if you embrace the element of surprise, then you’re likely to love this method. 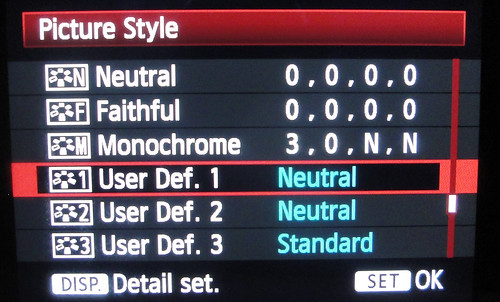 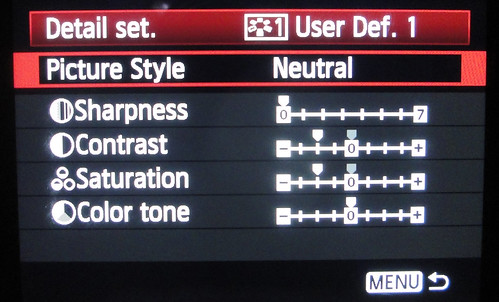 If you shoot JPEGs, you can use pictures styles (or picture controls) to fine tune the aesthetic qualities of your final image by adjusting attributes such as contrast, saturation, sharpness, etc. Most cameras will first present you with several presets — portrait, landscape, or monochrome, for instance — but if you dig a little deeper into the menu you’ll find options that allow you to set each attribute however you want and even save your settings as a custom preset. While raw files still have the upper hand in terms of flexibility, using picture styles will give you as much control as possible over your straight-out-of-camera JPEGs.

The list of little known and little used camera features could grow rather long; there are numerous features patiently waiting in their respective menus to be discovered by enterprising and curious photographers. The main purpose of this write-up is to encourage you to explore your camera, get to know it more in depth, and take full advantage of any features that might make your photography more fun, more convenient, more efficient, and more fulfilling.

Good information. 🙂
I guess I knew my camera better than I thought. lol
I love the back button focus! I turned that on a couple months ago and do not see a reason to go back to shutter button focusing. I still depress the shutter button halfway to retain exposure when I want to recompose after setting a focal point when I use spot metering or similar.

I use back button focus the same way you describe and I love it. Can’t go back to the “old” way. : )

It is funny, but I learned with a manual film camera. When I got my first camera with autofocus (still film), it annoyed me that it was with the shutter button. 20 years later, a wedding photographer on another forum shared about the back button feature. I am thankful for that, and I am sure that it has improved my freedom of composition and technique. I still would love to have a camera with interchangeable focus screens so I can put a manual one in. When I manual focus, I can’t tell when there is sharp focus with the screen in my Canon T5i. 🙁

I really like split screen focusing, which is one of the reasons I still like my film cameras. I guess I never really think about the focusing screens on my Canons, but you might be interested in this screen for you T5i.

Thank you. 🙂 It is nice that they have an exposure compensation chart for it. I am all about the spot metering lately.

I learned about back button focus a couple of years ago, and haven’t turned it off since. I do a lot of bird photography, especially Hummingbirds, and it makes shooting them so much easier!

I both like and dislike the rear auto focus, I have big hands and it makes it hard sometimes to hold in one hand a press the small button in the other. Besides that I love it.

How do you rate your images in cam?

I never got around to figuring out what the AF-ON button did on my Canon 60D. Now I can focus with my thumb, expose with my index finger and then take the shot. It’s like I have gained an extra finger. Thanks!!

The dead line appears in the last paragraph before the second feature (2. In-Camera HDR).

Your posts are always a treat, Jason! Like Adrienne, I was plesed to note that I knew of all these features (I read my camera’s manual for relaxation lol) however only use 2 of them as the HDR and double exposure I prefer to do in Photoshop and always shoot raw and never jpg and image ratings I leave for Lightroom as it’s more suitable for my workflow. As for mirror lock up, I use it all the time for landscapes and any time I need zero camera movement. BBF – GOLD! – oh how I love it! I tried it around 18 months ago and was hooked instantly and have never gone back. Thanks again for all your posts, I always learn something.

I’ve used back button focusing on my cameras for a while now and it’s a great tip! It works identically on the Fuji T-X1 and the Nikon DF, that are my two current cameras.

However I have had problems with the Nikon where focus is lost in cases where I shot a lot of frames with a tripod and shallow focus. It could be that there is a camera bug that jogs the focus motor ever so slightly when the shutter button is pressed.

Of course it is also possible that I somehow nudge the back focus button as well or that my tripod shivers. Time and tests will tell.

Well… Not vital information to anyone but I felt like sharing. 🙂

Thanks for the article!

I am still new at photography, even after 4 years in teaching myself, thank you for tips and I will try them, I have a Power Shot canon SX50 HS. Just got it ,I had a Power Shot SX40HS before but thought it was time to buy a new one , I love the zoom on this one also, I am 78 years old and this has become my greatest adventure. I am glad I found your site thank you.