A little knowledge is a dangerous thing or so the saying goes. Of course, generally in photographic circles, a little knowledge is not so much dangerous as potentially embarrassing. Misquoting a tidbit of photographic information will soon be jumped upon by the elders of our community leaving you in virtual tatters, your online credibility shredded or worse still, your real life peers looking down at you. One way to combat this is to arm yourself with some entirely useless, but undeniably interesting facts about our chosen pastime, the sort of things that can regain your street cred amongst the photographic elite. So without further ado, lets look at some conversation enhancing photography trivia.

Origins of the Name Kodak

Since the day George Eastman launched perhaps the world’s most famous photographic company, there has been speculation as to the origins of it’s name. Was it derived from some deep light related Latin or Greek? Perhaps it emanated from the mystical east, where names often have spiritual meaning. The reality is a little more down to earth, Eastman liked the letter K, he thought it was strong and incisive. After playing with many combinations of letters all starting with K, the final decision was Kodak and a legend was born. 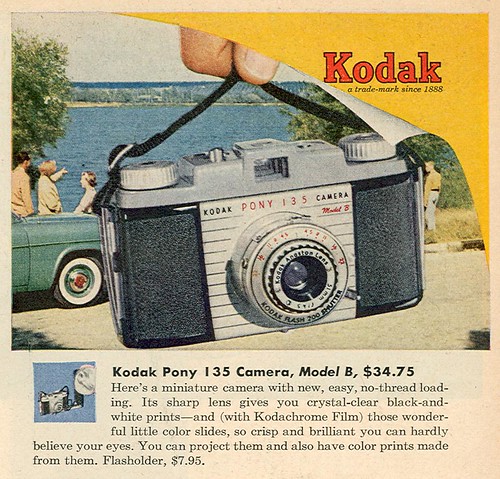 So what has an Irish born physicist called William Thomson got to do with balancing color on modern digital cameras? Mr Thomson created a thermometric scale to determine the temperature of absolute zero. His scale was later adapted to measure color. Heating a perfectly black object causes it to radiate light at different colors. At about 4000 degrees it is emitting a reddish color, the higher you go the bluer the light becomes. It is this scale that modern cameras use to analyse the color of the light reaching the censor. So why the name Kelvin? William Thomson became an eminent mathematician and physicist and in 1892 was made a British peer. The name he took was Baron Kelvin.

The Strange Numbers for Apertures

It seems at first glance, an odd sort of combination of numbers, f1, f1.4, f2, f2.8, f4, f5.6 and so on, perhaps the sort of sequence you might see in a Mensa test. In fact the numbers are actually a logical sequence, opening an aperture by one stop, increases the amount of light reaching the sensor (or film) by a factor of two. The f stop numbers on your aperture ring run in a sequence based on the powers of the square root of two. So if f1 is the maximum aperture possible, the next in sequence is f1 multiplied by the square root of 2 to the power of one, which equals 1.4. The next is created from the square root of 2 to the power of 2, which is 2 and so on. All of which add up to give us this strange but instantly recognizable sequence.

In this day and age of increasing miniaturization you might be supposed to find that the largest camera was in fact built very recently. Created by renowned photographer Dennis Manarchy, it takes large format to another level with its film format of 6ft by 4ft and an overall length of 35ft. Its resolving power is said to be 1000 times that of modern day digital cameras, although getting the film to the lab can be quite difficult. 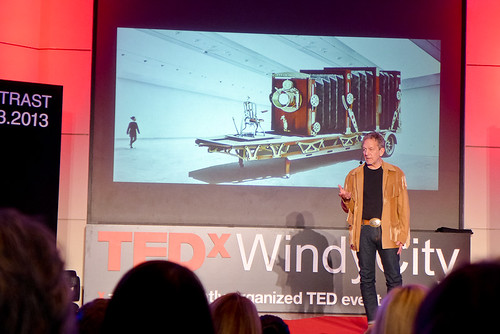 Mr Manarchy and his massive camera by lgdrew, on Flickr

Hasselblads are even today, legendary cameras, with an unrivaled reputation for quality. So where would you find free models of this seminal camera? On the moon! During the NASA Apollo missions, “blads” were taken to the moon by astronauts to record the surface or our nearest neighbor. However, their weight meant that they need to be left behind when the missions returned to earth, the astronauts bringing just the film rolls back. There are thought to be around 12 blads still on the moon.

Why Victorian Portraits Look So Stiff

We take high film speed and great image quality for granted these days but back at the dawn of the photographic era photographic film was painfully slow and required shutter speeds ranging from many minutes up to, in some cases, hours. For the Victorian portrait photographer, getting his subject to remain still for such long periods of time was challenging to say the least. The solution was neck braces. These, cruel looking contraptions would clamp the subject around the neck, hidden underneath his or her collar and preventing any excessive movement of the head. The result was beautifully sharp but unerringly characterless portraits of our Victorian ancestry.

So there you are, a few irrelevant yet interesting tidbits with which to impress your peers or bore your dinner guests. If this post made you curious and you are hungry for more, do check out this post about 15 Fascinating Firsts in Photography.

there was 6 lunar landings that put 12 ‘blads’ to the surface. only one returned. Apollo 15’s astronaut James Irwin brought his back. Which means there should be 11 remaining on the surface of the moon without their film packs free for the taking.

It sold at auction this last January for $900K.

And more about the camera..

It is this scale that modern cameras use to analyse the color of the light reaching the censor.

Fantastic! I’m amazed with that camera. Truly in every image there’s a hidden secret.

The black box only works with the yellow/blue light, not the magenta/green.

Also, this might be the largest camera currently in use, but the camera used to make the largest photo in existence was a hanger for a jet plane