This is Self Portraiture Taken to a Whole New Level!

These photographs have taken some serious time and effort to produce, so be prepared to feel inspired…

Johnny Tang is a Taiwanese American Photographer, born in 1985 and he specializes in a surreal and cinematic brand of portraiture. Tang received his BFA from the Savannah College of Art and Design and is currently living and working in Brooklyn, NYC.

While the subject of Johnny's work is mostly inspired by a Western education, most of his visual influences are inspired by Asian Pop culture. He looks to create works that have a unique charm to them and express his experiences as an Asian American.

Johnny has held recent solo exhibitions to include BBoy Monsters at the Reed Space in New York’s LES and World of One at Emmanuel college in Boston. His work is currently on view as part of the Boston Drawing Project at Carroll and Sons Gallery in Boston.

Each of the images Johnny has created tells you a story. Have a look at the series below to see some of Johnny’s work. 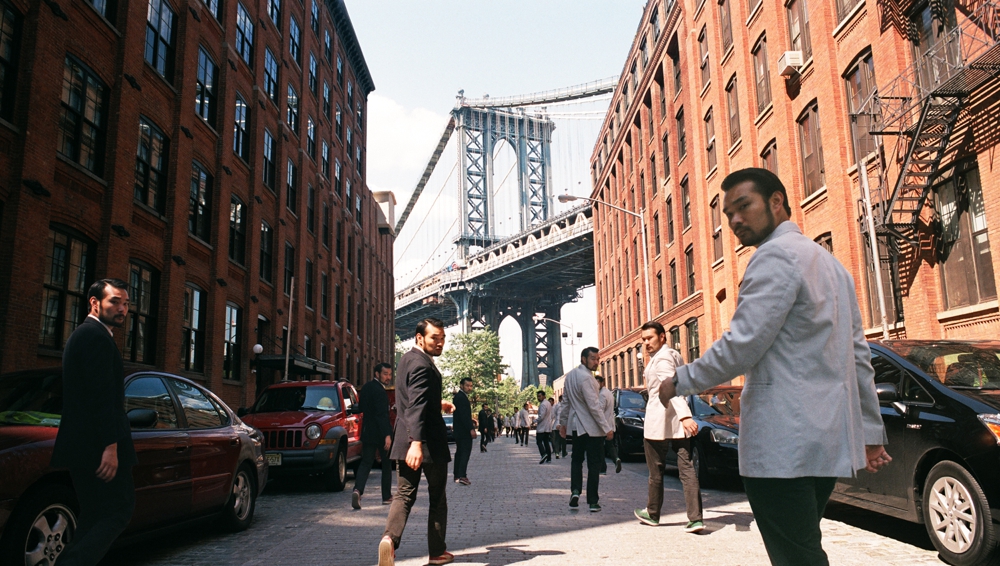 Johnny talks about his project, “World of One”:

“World of one is about the gray areas of life and draws much of its inspiration from the kinds of conversations we have with ourselves. By positioning opposing actions or emotions together in the same frame, these images seek to illuminate that although the elements seem to contradict one another, they are simply different expressions of the same personality.

All the images presented here are shot on 35mm film with the aid of an assistant. I prepare all the shots on a tripod and instruct someone when to push the button.

I choose to shoot these images on film because the colors present in the film (and absent in digital photography) remind me of pictures from my childhood.

The color of the film is also nostalgic for an aesthetic of a different time, which is crucial to making the dreamlike world I am presenting, seem all the more familiar.

While much of the ideas presented in these images are drawn from Western philosophy, particularly postmodernism, my inspiration behind the visual composition of the elements is often drawn from Asian traditions, particularly those of Chinese scroll paintings and Japanese manga.

I find that working in this way, I am able to pay homage to both my cultural backgrounds – Asian and American; this is another multi-faceted and dynamic fusion that my photos work to express.

The two different cultural backgrounds that I inhabit come together (in the same way the opposing forces in my photos come together) to create something new, and something uniquely Asian American.” 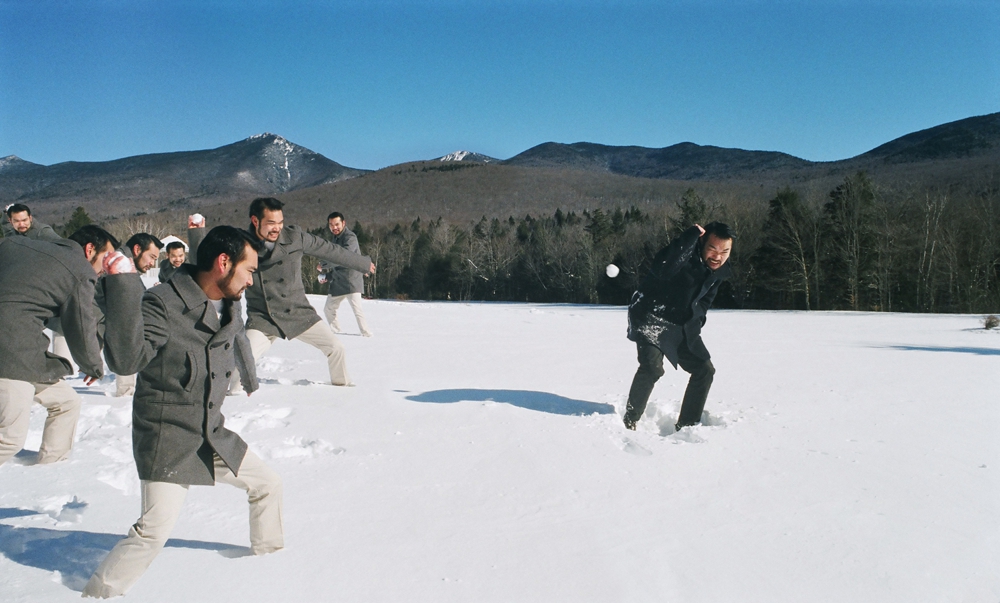 So, How Does Johnny Make these Images?

Johnny plans each of his pictures starting with some notes in a sketchbook and rarely some sketches when required. He sometimes has the idea of the image in his mind and maybe the title for the image too, which he jots down on the sketchbook.

Sometimes he just creates the pictures and lets the audience or the image itself bring out the meaning.

Johnny expects his work to be thought provoking and emotionally moving amongst his audience. He looks for a balance between what the eyes see and what the mind perceives which can be quite a difficult task.

Johnny firstly chooses a location for his image and then figures out how he wants the picture to turn out. He does some test shots on a digital camera before shooting film. This way, he gets the correct exposure on film and can plan out the logistics.

The number of rolls he shoots for each picture depends on the complexity of the final image. On an average, Johnny shoots around 5 rolls to complete an image.

Once the shoot is complete, Johnny drops off the films at a lab for processing where all the rolls are developed and all images scanned into high -resolution images.

He then imports the images into Lightroom where he culls the images, selecting the ones that have the strongest impact for the final image.

After this he moves on to building his collage process, starting with the background that has no people in them and then individually pastes Johnnys in them.

Johnny says, “Together they make up the Yin and Yang of the interaction taking place.” 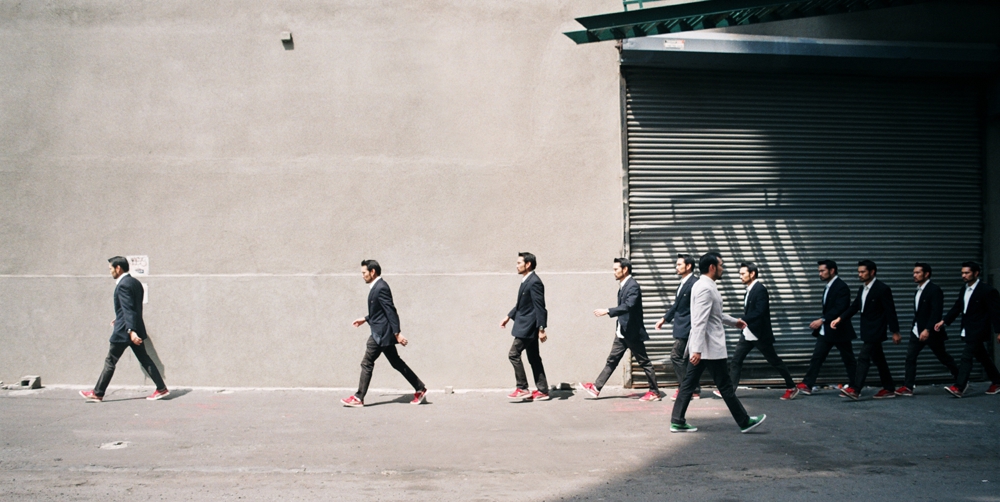 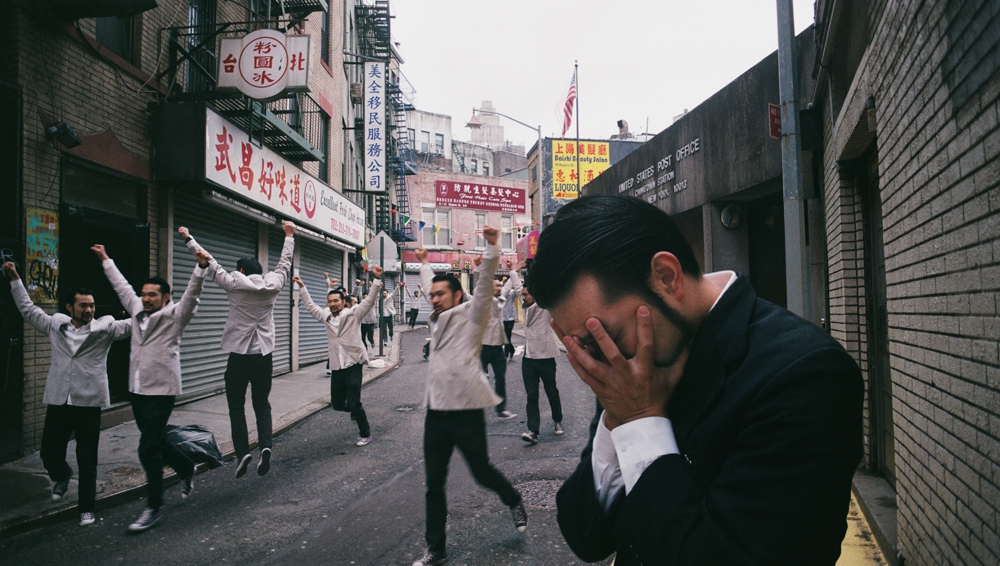 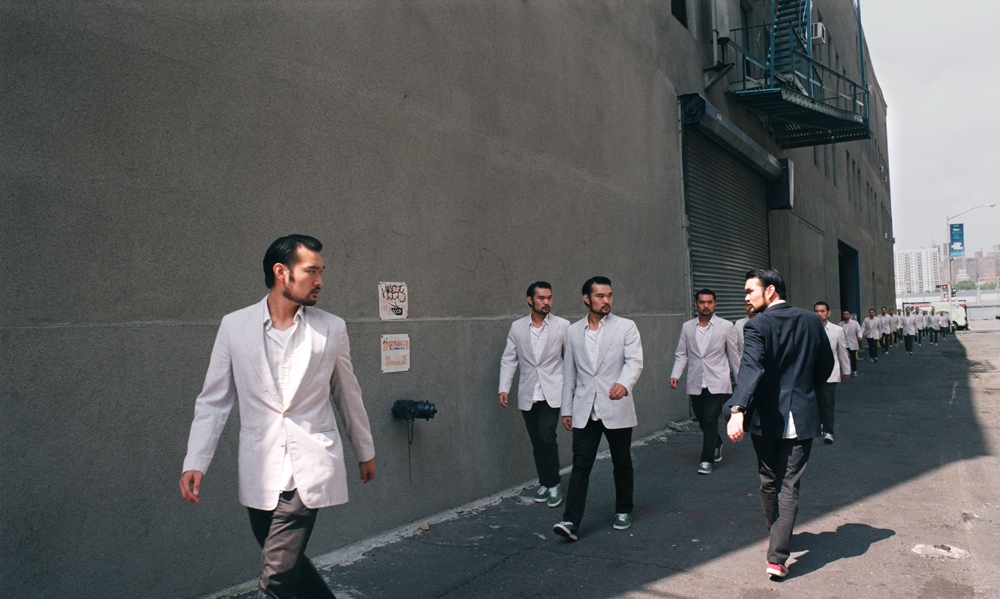 Johnny starts off with a large number of supporting cast and in the end, edits out any unnecessary figures. This is followed by the masking process which is the most time-consuming part in the making of the images.

Each image is cut out along with its shadows and reflections to match the background and also to help maintain consistency in the image.

“I generally try to resist the urge to edit out any characters before the initial collage is finished. It’s hard to tell which figures are worth keeping until the initial composite is complete, because you don’t know which frames you’ll need until you have the whole picture.”

“For me, making this distinction is one of the most difficult aspects of the process.” 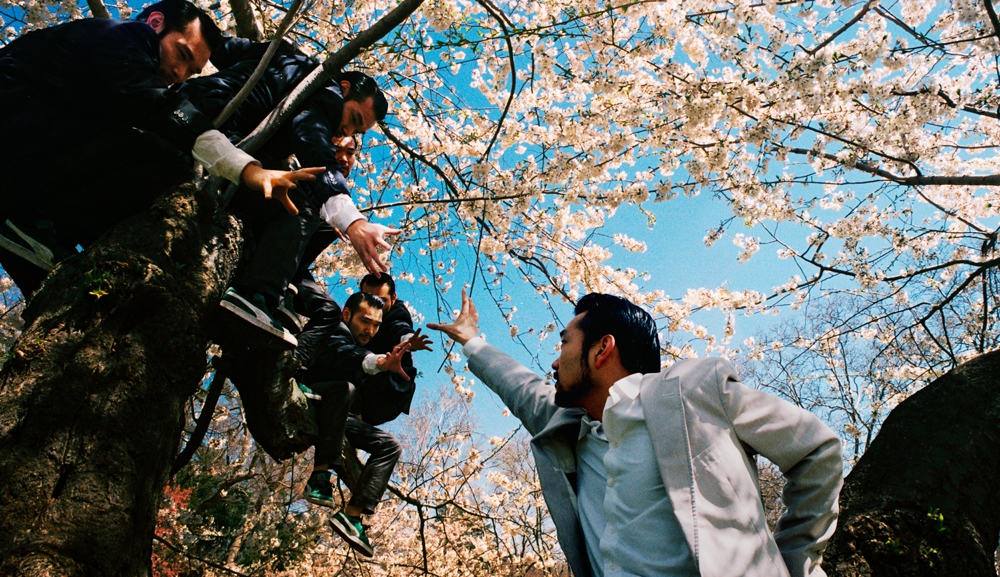 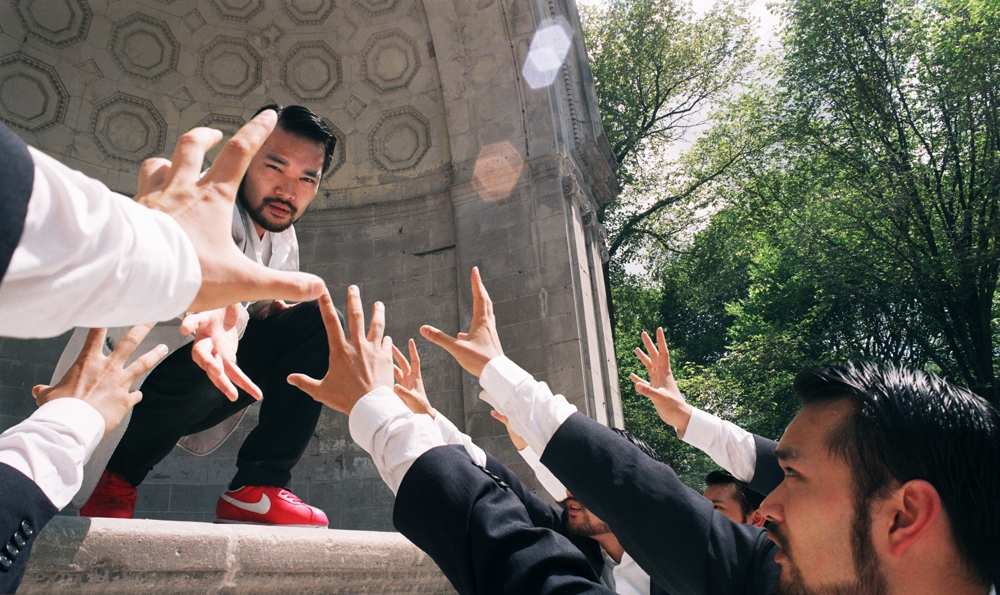 “Keeping as few guys in the picture as I can, while still maintaining the original idea and dynamic for the composition, is the key to making these pictures successful.” 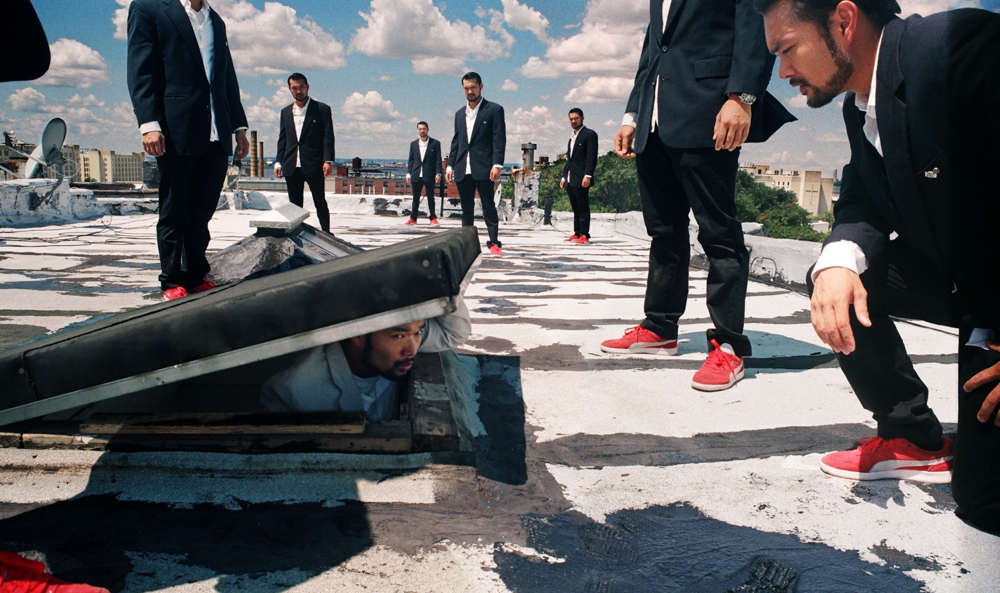 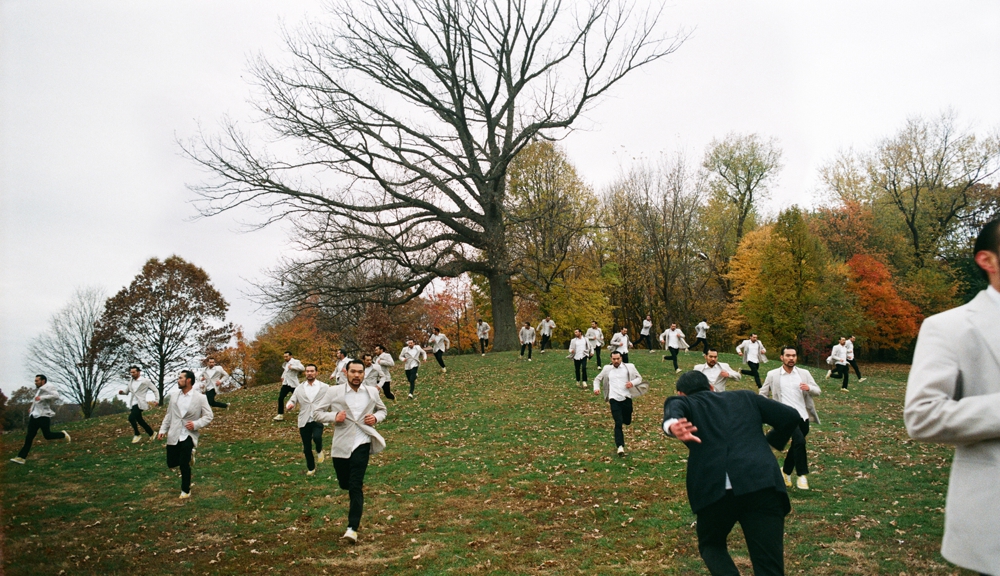 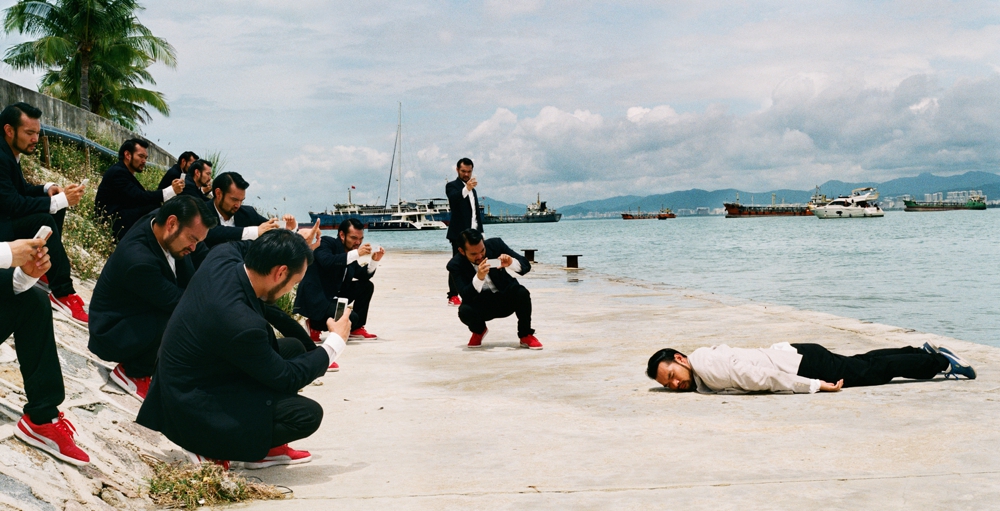 The image is then cropped to get all the elements into a proper frame. If you are interested in more information on how Johnny accomplishes this task, follow this link here for more details.

Here is a post that has a gif of the collaging process.

If you're inspired by Johnny’s work (I know I am) and would love to see more of his creative pieces, look through the links below

If you're looking for a guide to learn the Fundamentals of Editing, have a look over at this. Written by pro photographer Kent DuFault, this guide  will teach all the essentials you need to know –
“Learn The Fundamental Editing Steps From A Pro, That Will Change Your Photography Forever!”