We're sure that most of our readers here at Lightstalking are familiar with Polaroid film. But, have you heard of a Poladroid? Before we go down that road, just in case there are some young newbies here, let's reminisce a little bit about Polaroid.

Polaroid Corporation was founded in the Unites States in 1937. It became most famous for its instant film cameras which reached the market in 1948. From the introduction of instant film through the late 1970s its was considered primarily a novelty item. It provided instant gratification in a pre-digital world.

The earliest versions of the film often had unbalanced color, a “bloom” effect that made them appear somewhat unsharp, and vignetting around the edges. They also often exhibited a marred finish as a result of applying the coating stick (in the earliest films) and in later years from dirty rollers in the camera. 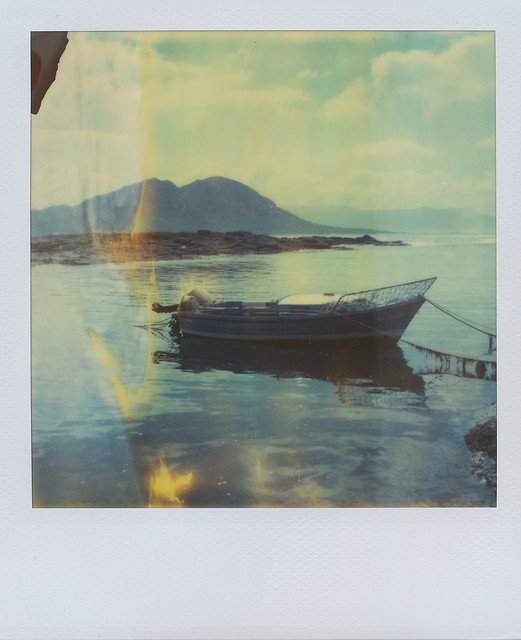 The film evolved many times over the years and eventually (around the 1980s) came into widespread use for the medical community, scientific study, and commercial photography. Professional photographers would “proof” their shots with Polaroid before exposing film. By this time, the film had improved color and sharpness. One Polaroid film type even provided a usable black and white negative as well as an instant positive.

But, Polaroid's film products had their roots  in novelty oriented instant gratification, and that tradition continued with the introduction of the SX-70 and 600 models.  These cameras produced a colorful square image with a white framed border. It was very chic for its time. This is the Polaroid type image that most folks today still remember.

When the digital era descended upon us, the Polaroid Corporation was doomed. There was no longer a need to buy expensive film, or wait even a few minutes to see a picture; in 2001 the company filed for bankruptcy. Their assets, including the trademark name were sold to another company. That company quit making the cameras in 2007 and the film in 2009.

For all intents and purposes, Polaroid was dead with the exception of its registered trademark name.

But an angel surfaced in a most unlikely individual named, Lady Gaga. The singer was an advocate of the “Hipster” movement. Hipsterism fetishizes the authentic. And somewhere along the way, Gaga decided Polaroid film just couldn't go away. So, she partnered up with a company in The Netherlands, that now held the Polaroid patents, and formed an organization called, The Impossible Project. Because of their efforts, Polaroid film and cameras are still available today.

As with most vintage items, Polaroid products are even MORE expensive than they used to be!

Which brings us to Poladroid!

We discovered this cool little program a couple of months back and just can't stop playing with it! You take your existing digital images and run them through this ridiculously easy to use software and out pops an image that looks just like an old Polaroid image. You even get to experience the sounds of an ejecting picture, and, you get to watch your Poladroid develop.

To use the program, you simply drag your image onto the camera. The camera clicks, whirls, and spits a picture. The Poladroid then sits on your desktop and “develops” right in front of you. When the picture is done developing, the software automatically saves a 400 dpi image to the folder of your choice.

Other than that, there aren't a whole lot of other choices in the program. And, that is part of the beauty of it. It's completely unpredictable. We tested the variability of the software by running the same image through the camera several times. Every time it spit out a completely different version, just like the real film. We also found that other variables of the original image greatly affected the final Poladroid: variables such as: contrast, color, resolution, exposure.

The original was run through the software on two different occasions. Notice the completely different color balance.

However, certain images process with color that closely matches the original scene. See the image below. You can still see the Polaroid affect with dark vignetting along the borders and a slight bloom around contrasting edges.

Experimentation is the key.

And let's face it – That's half the fun!

Sure, you can still purchase a Polaroid camera and film from Lady Gaga's Mission Impossible; Polaroid Corporation But, you're going to pay $23.49 USD (or more) for 8 pictures. That's $2.94 USD per picture. Or, you can visit Poladroid, download their sweet little desktop camera and create Polaroid type pictures until you're blue in the face. And… you can do all of that for FREE!

Originals with bright colors  in the blue and red spectrums tended to reproduce colors more accurately.

Images that you process through Poladroid often take on an “Old World” charm.

On why you should consider adding this little program to your photography arsenal.

Nice article but you are mistaken about the Lady Gaga connection. She was named “creative director and inventor of specialty projects” by the Polaroid corporation in January 2010 in an attempt to revitalize their brand. She is not associated with, and certainly had nothing to do with the founding (in 2008), of the Impossible Project which is a separate entity altogether.

I stand corrected, Caryn. I wrote this article quite awhile ago so I no longer have my research notes. I did some quick research today. It appears that Lady Gaga was hired to revitalize the Polaroid Brand, and she worked with the Polaroid Corp. and The Impossible Project in that regard.. She was not involved in the start-up of The Impossible Project.