Roeselien Raimond is a Dutch nature who focuses on wildlife nature photography, takes stunning pictures of little living things and wildlife, her favorite animals being foxes and cats.

“Foxes, along with cats, are my favorite animals. Their depth and uniqueness appeal to me. Every fox is in an individual character. With a fox, you never know what they are up to.”

About the Photographer and Her Gorgeous Work

Roeselien lives in Netherlands in a densely populated area where finding nature can be quite a challenge. She has worked in various fields like art, psychology, web design, but her focus later shifted towards photography as she found that nature would play a more important role in her career then.

Roeselien paints as a hobby and writes as part of her profession too. In fact, her talents have enabled to write for National and International magazines where she combines poems, writing and images to make up her all-inclusive product.

Roeselien initially began photographing small living things like insects but later got so fascinated by the Red Fox, that she has captured personal and intimate images of foxes that depict their individual personalities. 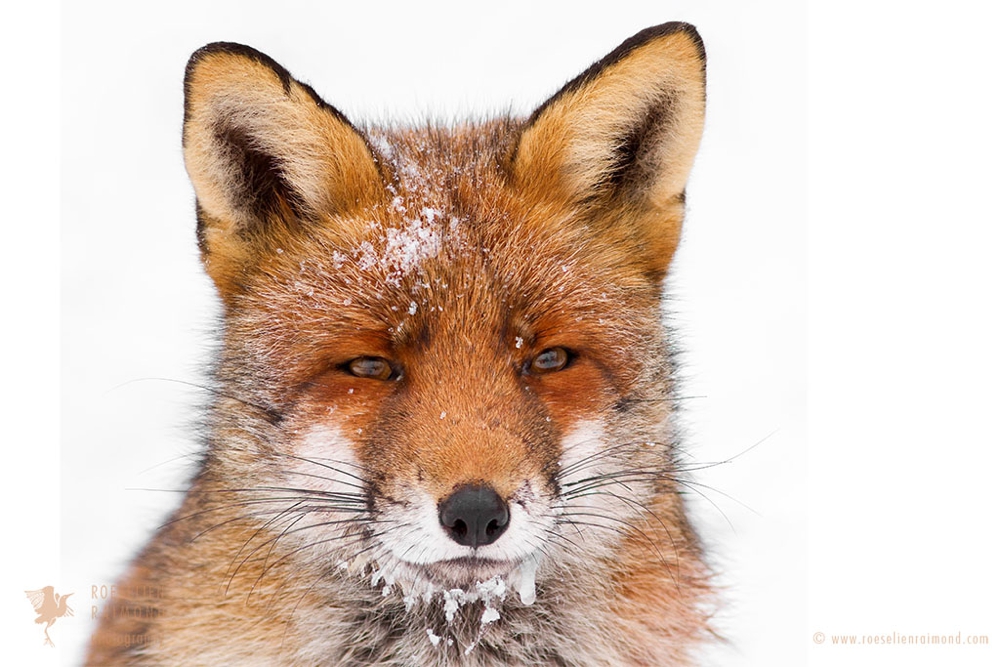 When Roeselien talks about the foxes, she says,

“For as long as I know, foxes are being depicted as mean and ferocious animals. In childhood books, the fox is always the ‘bad guy’, which made me think of foxes as dangerous animals as a kid.

This idea intrigued me. How could this animal, such a close relative to our beloved pets, be so different. So I started my ‘Follow the Fox’ mission, with the main goal to find out what foxes are like.

The first thing that struck me was their highly developed social skills and their strong and very loving family bonds. After years of studying them, their loving nature still moves me; when I see a father fox playing with the cubs, or an elder sister teaching fox lessons to their younger siblings.

Never a dull moment with foxes!

I try to capture them as I see them. Not as wicked chicken-killers, but as intelligent, caring animals with each their own individual characteristics.
Some of them are entertaining, surprising and venturous, while others are lazy, opportunist and at times even grumpy.

They all have their good and bad habits, just like all living beings. And that’s what my tale is about, about living and letting live and being who you really are.” 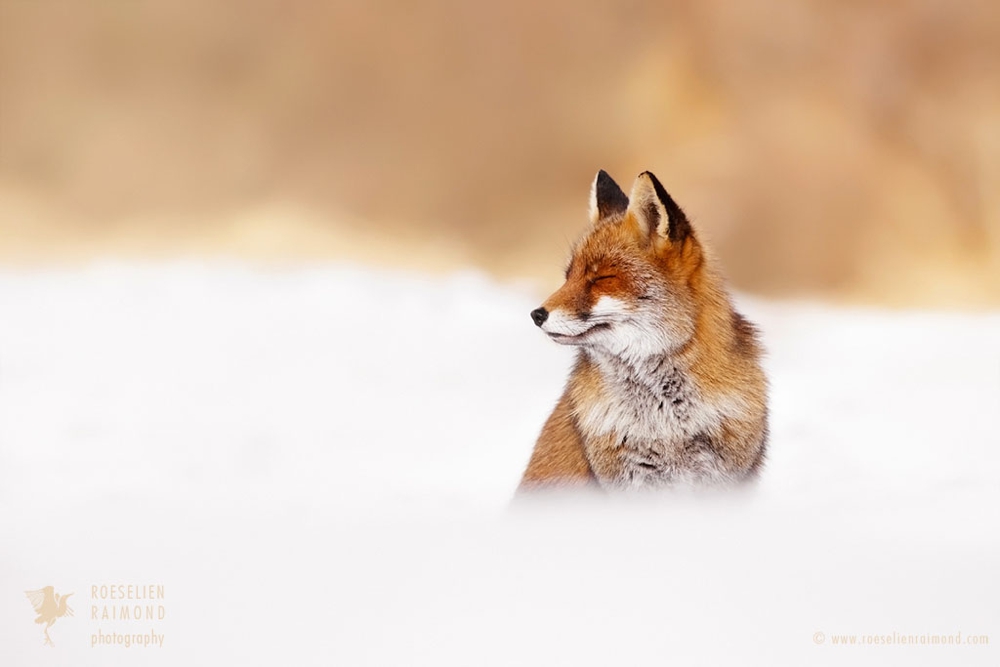 Red Fox in the Snow –  Image by Roeselien Raimond

Roeselien has shared an exciting Foxy Fairytale with us:

Once upon a time…
…there was this particularly vicious animal, with a profoundly bad character. A natural born killer and thief, that took pleasure in robbing poor farmers.

Not only did she steal one chicken, for personal use but she gladly killed every single one of them and left the farmer behind with only a sad memory in the shape of feathers and viscera. Obviously, the murderous and bloodthirsty creature, called fox, was hated and hunted upon. 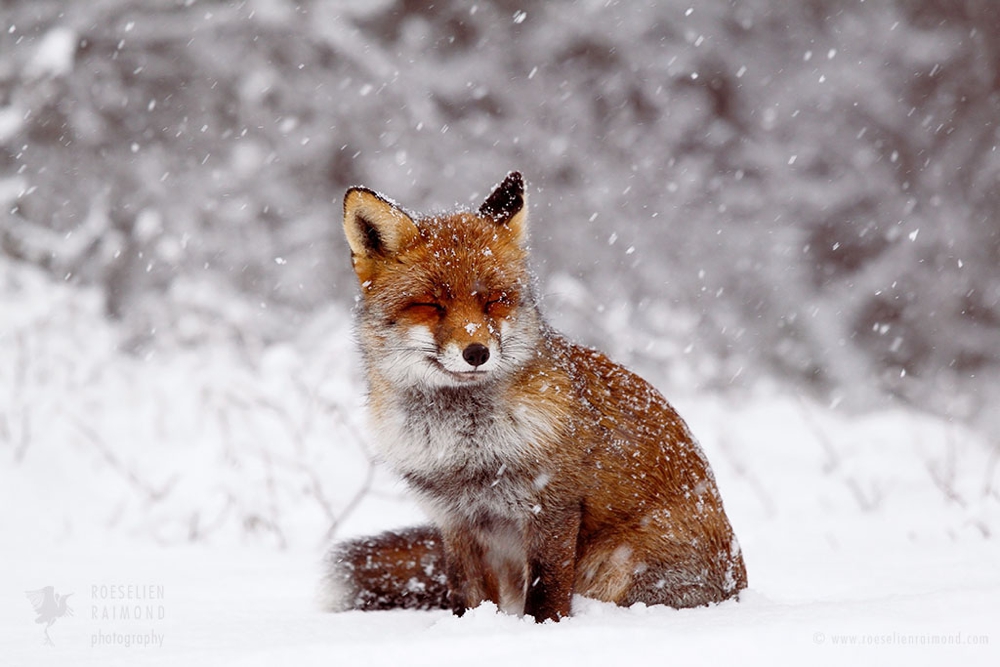 The fox just sat. Her belly was full and apparently the hunters had a day off, so she finally had some spare time to think over her sins.

Yes, she ate meat.
Why…?
Because that was in her nature!
And yes, admittedly, she often took more than strictly needed.
No idea why, that same nature just made her do so.
And yes, she sometimes stole an egg or two.
Or robbed a mama rabbit of her babies.
Not so very nice, no.
But did she have a choice then, like people have?
Should she quit eating meat?
Improve her life?
Become a Good Fox …?

And while the fox, so totally unfoxy, pondered over her sins, white fluff fluttered down out of nowhere. And yet another and another and suddenly there were thousands of fluffs falling from the sky as if someone emptied a huge pillow over her head.

The fox looked up surprised. “ Was this a sign from above? In the shape of chicken feathers ..?! That must have been quite some chicken then, surely more than she would ever tackle!

The countless feathers fluttered down and the fox saw the world disappear slowly. The sharp spines of the buckthorn became round and white, even the rough rocks were covered with a soft white blanket.

And, still amazed by this unknown phenomenon, the fox felt one of the white tufts land on her nose. It did not feel like a feather, though. It felt cold and it tickled!

The fox shivered: “Was she disappearing? Was this the punishment for her sins, for all those killed chicken, rabbits and birds ..? Was this…the end..?” 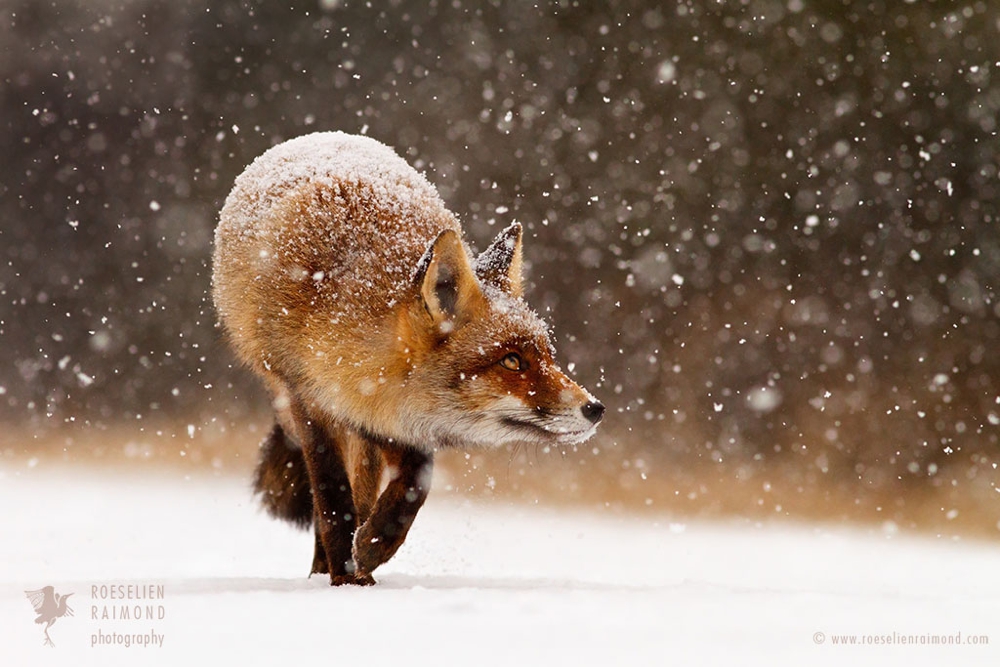 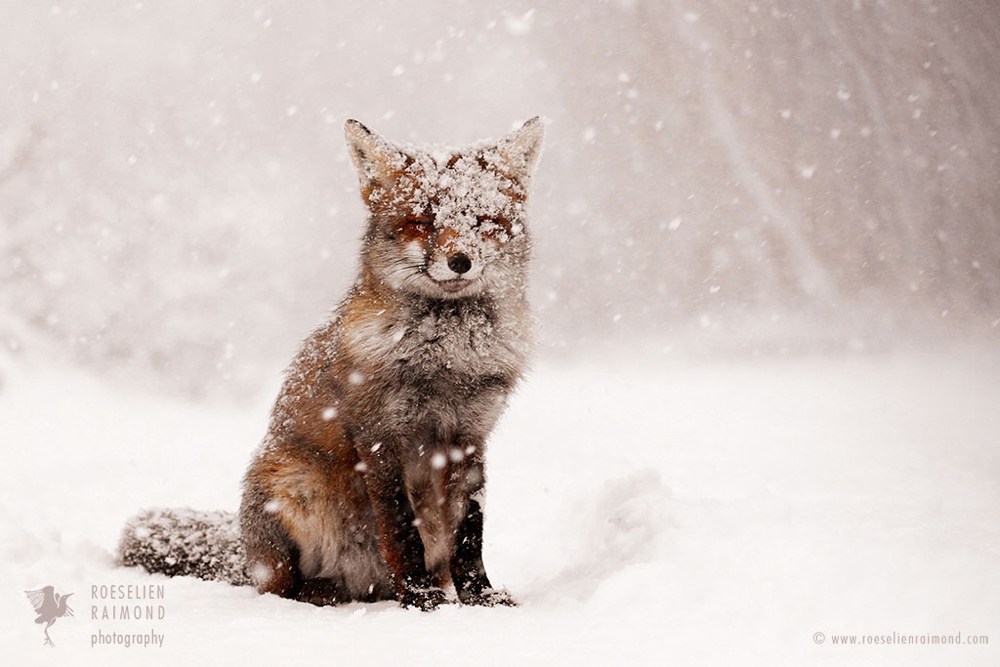 More and more of the cold prickly stuff covered her fur, but it actually didn’t feel that bad. Fear gave way to amazement and curiosity and the fox noticed how her bright red coat was slowly becoming invisible, but she was not disappearing.

She could still clearly feel her tail. Her nose could still smell, her ears still hear and her eyes still see. She just was as white as snow now.

“That was it!
Pristine white, innocent and pure.
The snow washed away all of her sins and she would finally be a Good Fox!”

The fox could not believe her luck and let the snow come over her, totally prepared for the Great Cleansing Ritual. After today, she'd finally gotten rid of her bad image.

And to her beautiful laundered coat, everyone could see that she was no longer Sly & Evil, but Honest & Sincere. Maybe even holy. The children's books should be rewritten and hunting foxes would be banned immediately!

With these hopeful thoughts in mind, the fox warmed her heart and defied the long cold winter night. When, after many hours of snowing, the sun finally rose, there was no sign of a red fox left but only a fox-shaped snowman in a completely white landscape that had no evidence that there had once been a fox. 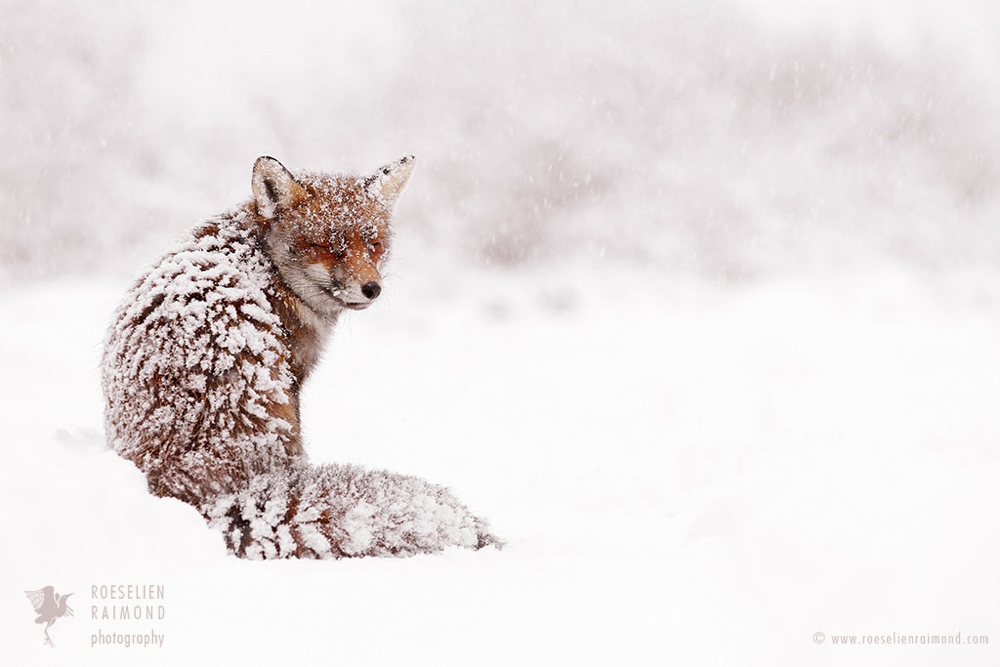 A fox sitting in the snow – Image by Roeselien Raimond 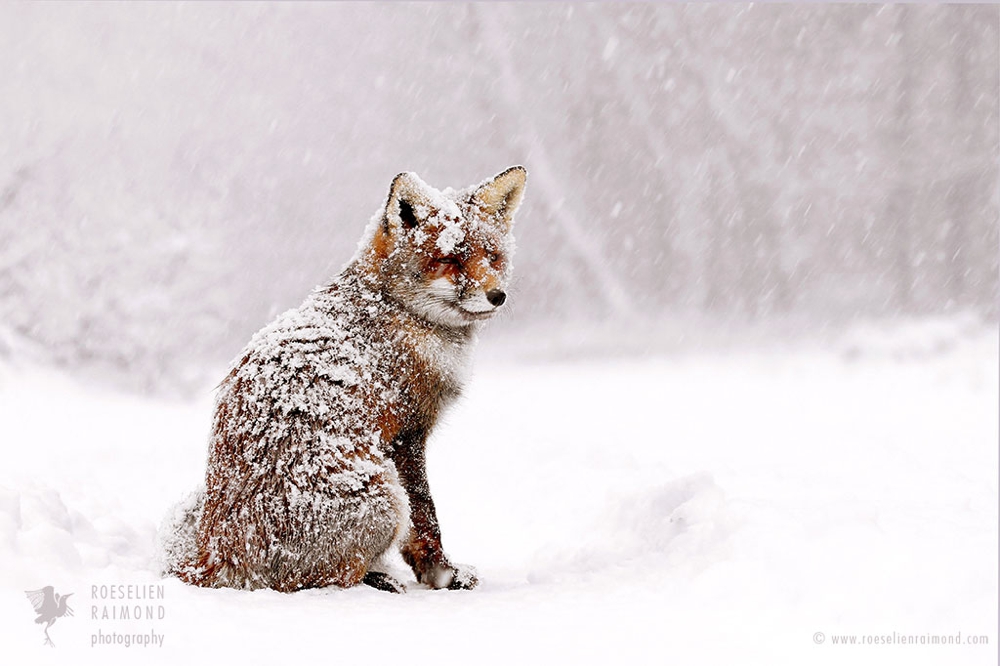 Red Fox and the Snowstorm – Image by Roeselien Raimond

However, it is quite something, such laundering ritual! Small icicles hung on her whiskers and the tip of her tail had become insensitive. She hadn’t received any sign that she was ‘ready' though, so she bravely waited for the Great Whitening to complete.

She ignored her stiff muscles and repressed the impulse to itch her tail until a flake suddenly tickled her nose. She couldn’t help herself and sneezed! The white package burst and snow powder dusted through the air. The fox surprisedly blinked her eyes.

No New & Improved Fox was born…
She was still red
Just as she was before the Great Snowing!
The color of her fur was so familiar
It was the color she had as a cub, inherited from her parents and ancestors.
And to her own surprise, she was not disappointed at all, but secretly a little relieved.
That red looked so beautiful!
After all, it was HER red! 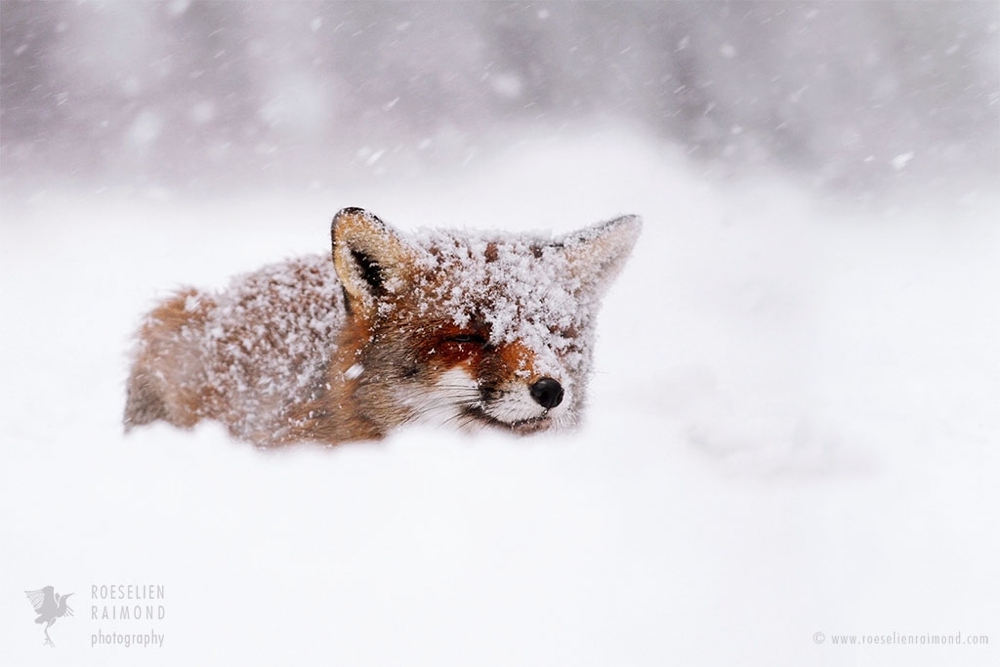 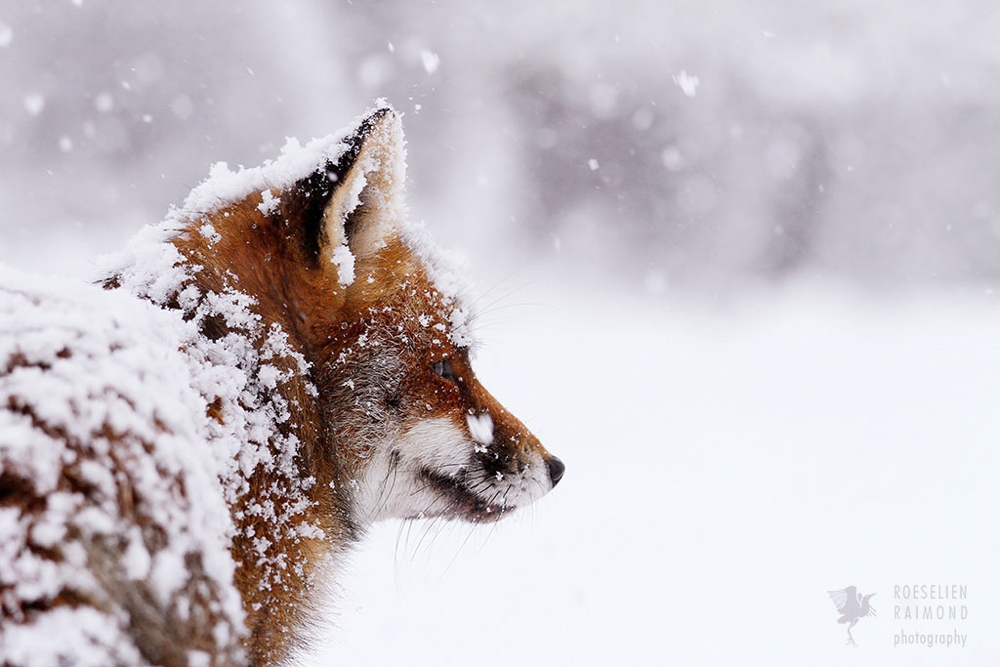 The blizzard had failed to wash away her sins. But the snow gave her something instead; the realization that she's good the way she is, with her red hair and chicken-devouring character.

So the fox stopped meditating, as pondering simply was not her nature. She spontaneously did something more ‘foxy’; She took a big pounce into the snow, gasping for flakes as if they were chicken feathers and bounced overjoyed by the white landscape.

Would this have been a movie instead of a fairy tale, you would have seen a happily jumping red dot getting smaller and smaller, accompanied by the first notes of “You cannot always get what you want, but sometimes you might just get what you need.”

And the fox lived happily ever after…. 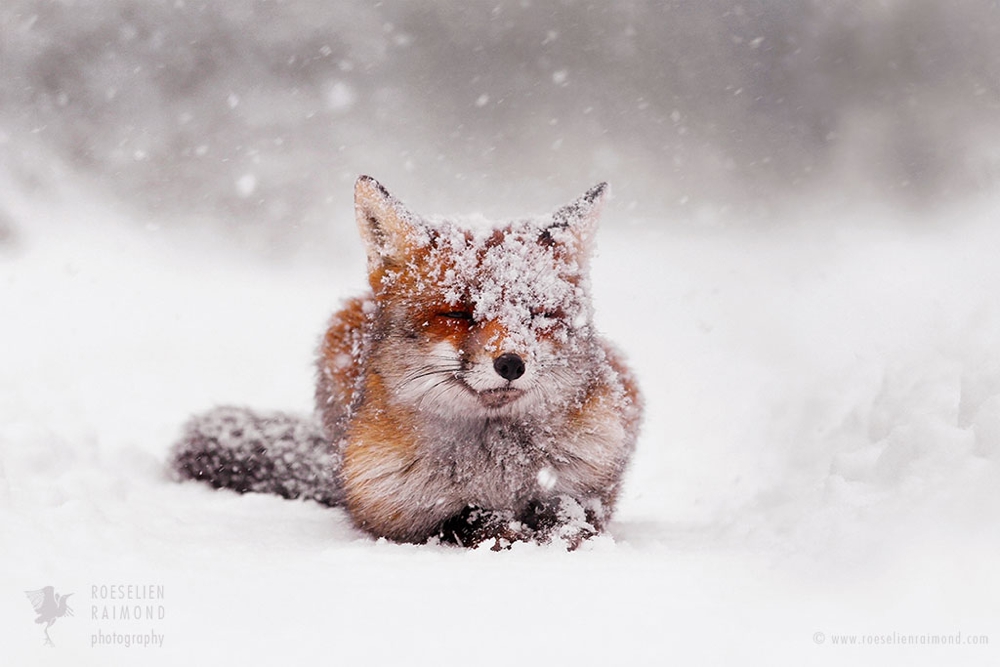 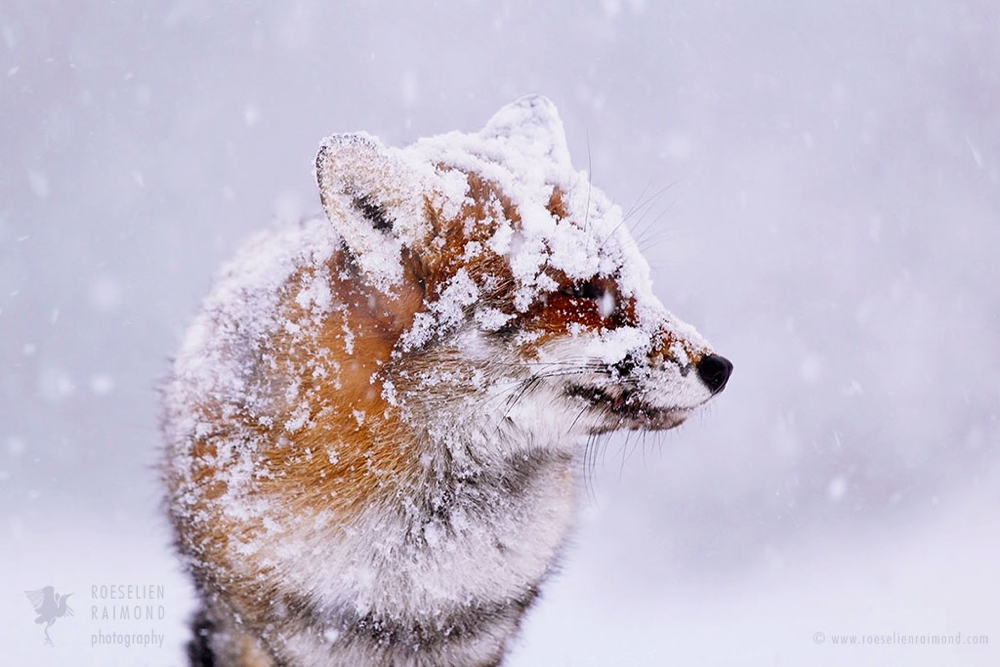 Red Fox with Snow on the Face – Image by Roeselien Raimond

Roeselien uses the following gear for her photography.

Learn a ton of highly valuable pro post processing tips to make your time at the computer more enjoyable.

This amazing eBook guide will help you discover what you can do to make your photos shine!
“Learn The Fundamental Editing Steps From A Pro, That Will Change Your Photography Forever!”