This is a guest post by Perry Trotter, a professional photographer from New Zealand and maker of The Wedding Photographer app on iTunes. Download the app.

Shot in front of Cambridge Town Hall in the Waikato region. Cambridge is an attractive small town in the Waikato, about two hours drive south from the city of Auckland. The Waikato river, New Zealand's longest, flows through the town.

This image employs off camera flash and a wide angle lens.

Most of the images included in The Wedding Photographer iPad app were shot either wide or long. Shooting at normal focal length (about 50mm FX or 35mm DX) tends to render perspective in much same way we perceive things with the naked eye. Shooting wide or long alters the perspective and can immediately (and often unconsciously) add an element of interest to an image.

The present image shows the same wide effect, but to a lesser degree.

Shooting from a position other than head height can also introduce an element of interest to an image.

The present image was shot from a kneeling position. I asked the groom to dip the bride while I shot a series of images. This image was captured when the bride and groom looked up at my assistant who was holding the off-camera flash to my right.

The couple's position could have been better but this image had the best energy and warmth of the series.

The original image (as seen here) was processed in Lightroom 4.

The building is an unpleasant yellow-green. Changing the color scheme is central to the processing of the image.

The procedure for this image can be summarized thus:
-increasing local area contrast and shadow detail
-substituting color
-darkening portions of the image

First, I applied quite extreme settings in Lightroom 4 in order to increase local contrast (Clarity in Lightroom-speak) while bringing out shadow details. Such settings almost always require the saturation to be reduced. 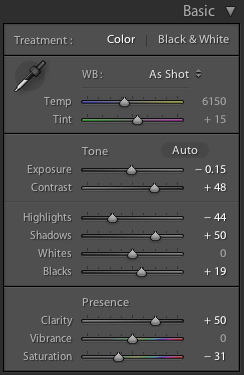 Second, I removed almost entirely the green, aqua and blue tones using the Saturation sliders in the HSL panel. This has effectively dealt with the building's unattractive yellow-green. 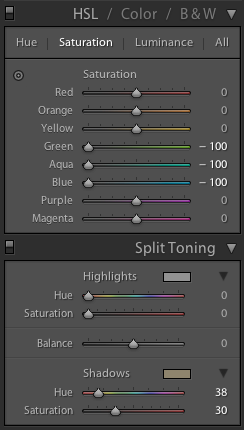 By using the Split Toning feature I introduced a red-brown tone to the dark tones.

It is a matter of personal taste as to what constitutes a pleasing sepia. I recommend working with the Hue setting between 30 and 50.

Finally, I darkened the edges of the image. Using the Lens Correction and Effects panels I introduced vignettes with the settings shown. I also used the gradient tool to darken the sky in the left upper corner. 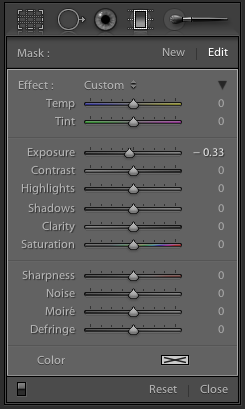 Darkening portions of an image can be effective in creating mood in an image and drawing the viewer's attention to the subject. 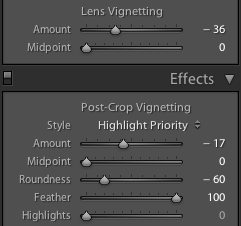 A Lightroom 4 preset based on this image is available via our app, The Wedding Photographer.

The Wedding Photographer is an App by Perry Trotter Photography for professional and enthusiast photographers, brides and grooms -and anyone interested in wedding art. It includes:

Download the app now. A free version is also available.

I think ppl are missing the point. It’s a fun shot that I am sure yr clients loved and a representation of something diff from the norm using a wide lens as the article stated. I like it!