Skip to the content
Share:
This is a guest post by Karl Johnston that originally appeared in Slave River Journal. You can find out more about Karl and see more great shots of auroras at his photography website. 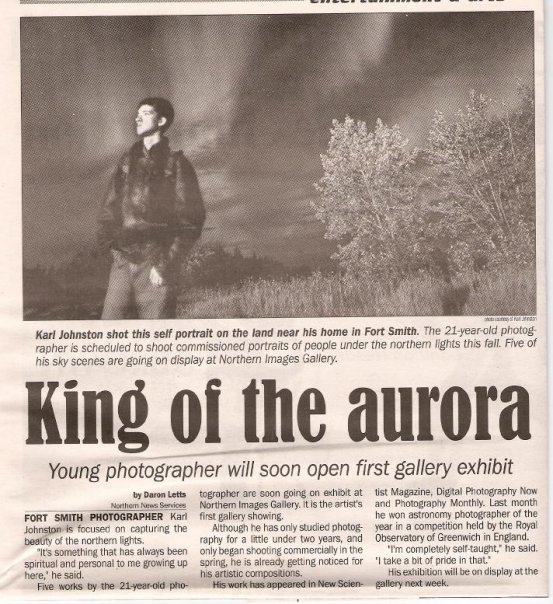 Seeing as it is what I'm famous for, I thought it only fair that I share some techniques for getting successful photographs of the Aurora Borealis. It's no secret, and anyone can do it. There are three things that you need to start with; a sturdy tripod including tripod head, a camera (of course), and a wide angle lens. A wide angle lens technically refers to anything under 50mm of focal length. Essentially this is what enables you more field of view when you look through the viewfinder or LCD screen of your camera.

It is possible to work with 50mm but I recommend having a lens that has a focal length of 35mm or less. Next point to make is the tripod and tripod head. The tripod and it's head are usually purchased separately and there is a large variety to choose from. I recommend, while a bit pricey, it would be worth it to invest in a tripod and head made of Carbon Fiber or Basalt. Try to avoid aluminum as the metal vibrates a lot more than Carbon Fiber and Basalt tripods. They are also a lot lighter and it makes a world of difference to carry something that weighs 3 lbs over a distance of several kilometers and something that weighs 10lbs!

Once you have the right gear accumulated you will need some technical specifications to plug into the camera; however, It's not quite all as simple as plugging values into your camera to create dazzling pictures. These tips should help you learn the secrets; however, having a D/SLR camera will be very much worth your while as they come equipped with larger sensors (a square-like plane within the camera that accumulate light which are what translate into photographs on your memory card or film).

Seeing as you will be shooting at night you will need a relatively long exposure (10-30 seconds) to allow more light to come in through the lens and soak up on the sensor/film.

This isn't enough on it's own; however, you will also need to compensate by having a very large aperture (ironically this means your “f” number should be a small number; such as f/1.4-f/2.8 with the smaller number being the best).

Finally, your ISO/ASA setting should be high enough to compensate for the darkness in your scene. Depending on how well lit your surrounding area is will depend on what variation of values you need; so play around and see what you get ! A bright moon and starry night in your scene may have you using exposures as speedy as 8 seconds at an aperture of 2.8 like in this shot of the Aurora taken on September 13th, 2009: 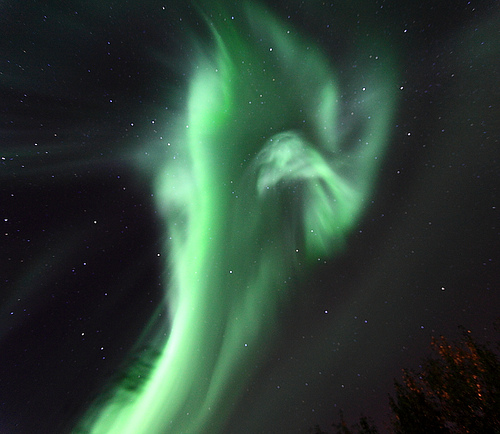 Or the scene could be so dark you need an exposure of 30 seconds, 2.8 aperture and ISO/ASA speed of 25600!! This shot is known as a “widefield” photograph of our milky way galaxy. In the left hand corner you can find M31 (aka: Andromeda galaxy). Andromeda looks a lot smaller than our milky way galaxy but this is because it is so many light years away from us and we are viewing our own milky way galaxy from inside it. The part in this photograph represents just the “arm” of the milky way. It really gives you perspective on just how much is up there when you remember that these two are but two in billions and billions of galaxies equally large or larger in our universe.  Be wary of using high ISO/ASA settings as too high a value can create images that look very grainy, speckled and not very sharp. 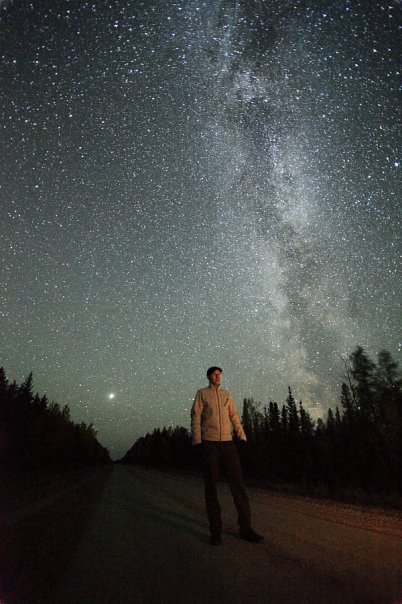 This shot is a portrait of myself posing under the aurora. Technical specifications: 13 second exposure, f/2.8, ISO 2500 at 16 mm of focal length: 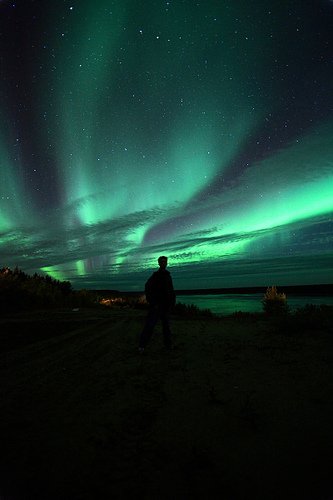 Finally, the number one trick to making sure you get sharp, colorful and images rich in definition is making sure everything stays together. The camera and lens has to sit on the tripod and it cannot move. Not even a whisker or a bump otherwise the exposure could be ruined. The light that comes through the lens has to be consistent and constantly hitting the camera's sensor/film as if it were a straight line of water spraying within a funnel. If you shake or bump the funnel the water has a chance of hitting the sides and spilling everywhere to create a mess. To combat camera shake consider using the remote timer to a period of 2-10 seconds. Another thing to invest in that will help combat camera shake is a remote cable release. The cable release allows the shutter button to fire the shot electronically and saves the slight bump of hitting the button.

You don't need a high end camera to take pictures of the Aurora. Having the ability to use high ISO effectively, however, will definitely help. Most cameras today can go up to ISO 3200. Myself using a 5D mark II I have taken it as high as 12800 ISO, but find my larger prints do best around ISO 4000 and under. Play around with it. Try different compositions. Include the human element, tell a story, record the event.

This is a great article. Thanks for being so generous with your knowledge.

Ideally, anywhere within the “auroral oval” (see this link for an example: http://www.swpc.noaa.gov/pmap/ )- Yellowknife and Fort Smith, NT, being hotspots for aurora activity where I am located..but it can be seen just about anywhere in Canada if the light pollution isn’t too great. I’ve heard reports from Montreal and saw it myself closer to the American Border (49th parallel) about 4 years ago.

It’s frustrating to have a special moment without a camera to capture it. With advancements in technology, everything seems to have gotten smaller including cameras. This enables us to put a camera on just about everything, including a key chain. This way you will never miss a photo opportunity again.

I so appreciate the knowledge that you have shared, as a northern girl that has seen the aura

I just came across this article today (11/14/2014) and I am still looking for a good basalt tripod. Which form of basalt is best for this? I understand that a sedimentary or metamorphic tripod woulds not be appropriate for this, but are any other igneous tripods recommended?