Like many people, my path into photography came from a Soviet SLR, in my case a Zenit 11. For my 16th birthday I had the choice of an Olympus Trip or the big clunky Zenit with lots of buttons and dials. Even in those days I was a budding gadget freak and was instantly attracted to the complicated camera despite knowing nothing about photography. The Zenit was bought and the rest is history. Zenit however was just one of a large number of Soviet camera manufacturers who produced a range of functional if not exciting cameras. Today we will have a little trip back and take a nostalgic look at some of the iconic Soviet cameras.

Most of us brought up in the film era had secret desire to own a Hasselblad. It was the top dog when it came to cameras and had a price tag to match. Meanwhile back in the USSR, a company called Kiev were busy virtually cloning the Hassleblad 1600, with its Kiev 88 model. Although it’s engineering was decidedly communist, the viewfinders were in fact interchangeable with the Hasselblad’s. The Hasselbladski as it was affectionately known featured interchangeable backs and used Ukrainian made lenses that were based on old Zeiss designs with a surprisingly wide range of optical choices. Today a search of eBay will reveal plenty of secondhand Kiev 88’s around for budding film photographers, but buyers beware, most of them still have Soviet manufacturing quality so make your choice wisely. 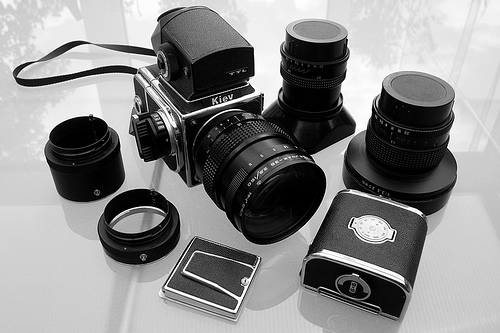 Another of photography's iconic brands is of course Leica and not to be outdone, the Soviets created numerous clones of Leica cameras. Among the most significant were the Zorki 4 “Mir” cameras which were manufactured between 1956 and 1978 by the KMZ company in Moscow. Originally based on the Leica II, they did in fact accept Leica lenses, although they were usually supplied with lenses from the Jupiter company. Over 1.5 million Zorki 4 were made and many examples can still be found today in good working order. Although very quirky and despite having no light meter, Zorkis were capable of taking some good quality images in the right hands. 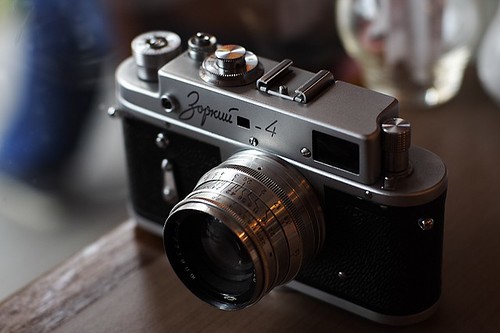 A Zorki 4 with Jupiter Lens by Jerry Hsu on Flickr

For many of us taking pictures in the 80’s the Lubitel 166 was heavily advertised as the cheap way into medium format. A twin lens reflex camera taking 120 roll film, the Lubitel was an enigma, a plastic camera costing £15 which if used “very” carefully could produce good results. Manufactured between 1976 and 1986 about 1.5 million units were made in total. Lubitel means amateur in Russian and the camera’s were designed as cheap starter cameras for Soviet citizens and featured a manually cocked leaf shutter with speeds up to a whopping 1/250th of a second and a frame counter that, at best, gave a rough indication of the number of shots taken. The DNA of the Lubitel lives on today in the resurgent Lomo photography craze, Lomography being the company that produced the original Lubitel 166.

My entry into photography and one of the best selling Soviet cameras outside of the USSR, the Zenit 11 was manufactured by the BelOMO company in Belarus. The camera featured the M42 screw thread mount which was also used by Praktica. It was the last of the line from the original Zenit E series and features an unusual, uncoupled Selenium cell light meter that sat atop the pentaprism and required no power. The exposure was calculated using a dial on the left top of the camera and aligning a needle in a small window. All the features of a manual SLR were present, ISO setting, shutter speed from 1/8 to 1/500 plus bulb, a pc socket for flash etc. The camera was usually supplied with a good if not exceptional 58mm f2 lens which had a reputation for excellent build quality. 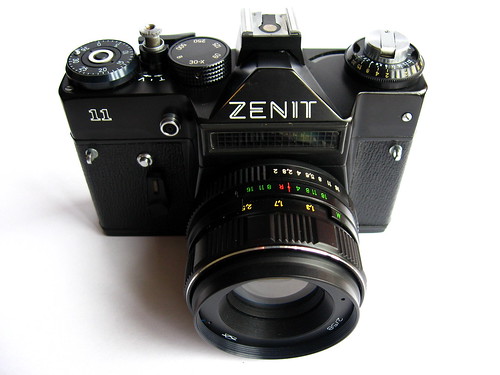 A Well Used but Working Zenit 11. By Emil Manolov on Flickr

This is just a brief glance at what was in fact a very wide range of cameras and lenses produced in the USSR. Many of theses cameras are still available on the second hand market and on eBay and can make great tools for practicing the dying arts of film photography, manual exposure and manual focus. My local camera store is awash with such examples, but perhaps that is no great surprise as ironically I now live in the former Soviet Union.

I swear by my Zorki 6, see img below. FED also made a rangefinder. The Chaika is a really cool half-frame that is fun to shoot with, but damn, it did break easily. The drawback to Soviet cameras is that they aren’t really reparable in the US. http://lh3.googleusercontent.com/-f51HTj-i7qA/T427oLn9PMI/AAAAAAAAIOQ/j5cxHQBp4yY/s512/02%2520Portfolio%2520BigPinkBlaze.jpg

I have a few Russian Rangefinders. I think I have a Zorki put away, but my favorite is a Fed 5C. It has a hole it the shutter that I have to repair, but it’s capable of taking really good photos. The lenses on Russian cameras were really quite good. http://www.flickr.com/photos/suzoh/2850762347/